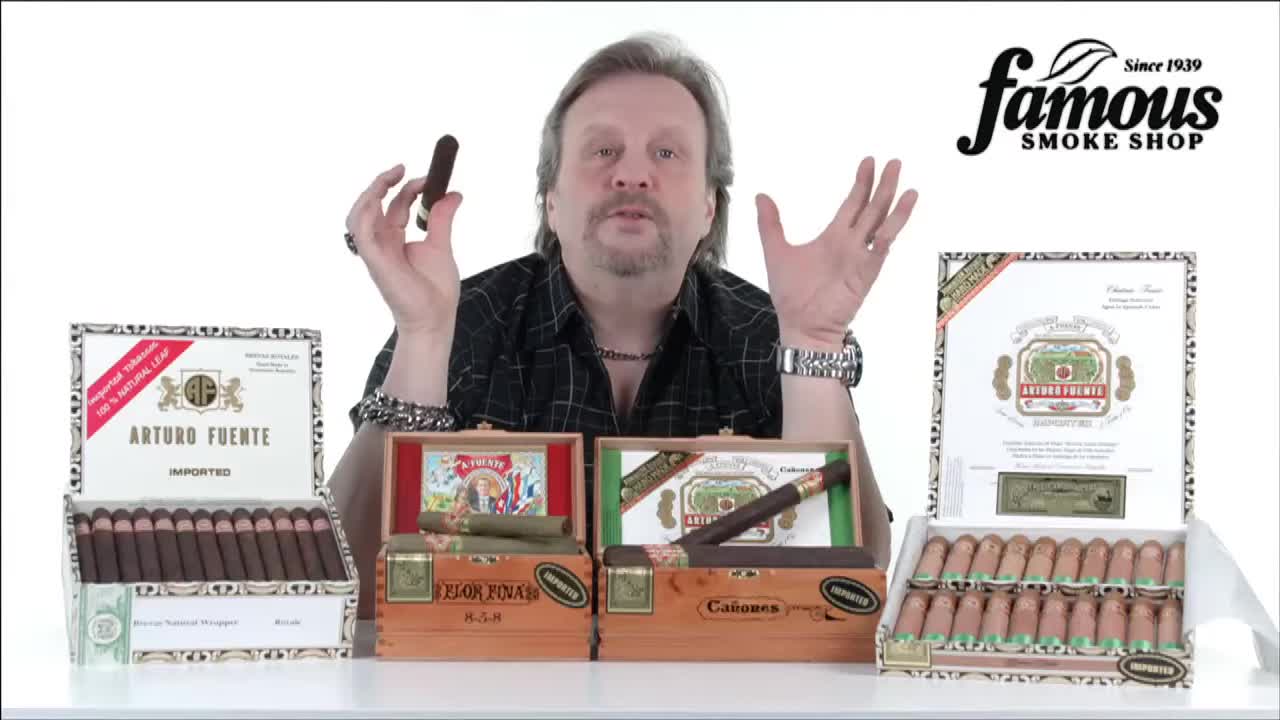 The Arturo Fuente Chateau Fuente natural is one of the hardest cigars to find, so if you see them in stock, don't delay. Made with smooth, aromatic, Connecticut shade wrappers and blanketed inside cedar sleeves, the Chateau Fuente offers a mild, memorable smoke.

Very good will buy them in the future

I love the taste of this cigar, I had been smoking full-bodied Olivias for a while and this reminded me of the variety out there! To me, there was an always present strong grassy note, it is a very earthy cigar, I would see it great for smoking at a picnic, the pool, or perhaps when out with nature. Definitely something I d consider buying again.

Unequivocally the best of its kind. Simply not matched, if you like mild with flavor this is the best! Great cigar with nice subtle notes of a Cuban!

I have been smoking cigars for 20 years. I ve tried many brands but always come back to Chatau Fuente

... read more
5.0 stars
When you don t have time for a double chateau
for Arturo Fuente Chateau Fuente
by marty miller in Hood River, Oregon on September 03, 2018

... read more
5.0 stars
a hidden treasure i stumbled upon one Christmas eve
for Arturo Fuente Chateau Fuente
by Joe in California on October 09, 2017

i by no means am an aficionado when it comes to cigars my daily smokers are dutch masters cigarillos. having been a two pack a day cigarette smoker at least ive matured into tobacco a bit more and hope i continue to do so. ok so a couple years ago i got a Christmas bonus from work....100$...not amazing but not bad and decided to use it to buy a semi decent 50$ bottle of scotch and four cigars for my three brothers and I. there are only two cigar lounges in my area and they are the only places to buy premium sticks around here....or so i thought. my county is riddled with small time tobacco and pipe shops that carry everything on the cheap side but dont carry anything premium only discount products at low prices....it being Christmas eve and around eight in the evening the lounges were closed. so i would have to hope to find something decent in one of the flea mart tobacco shops. the first two i stopped at only carried blunts like swisher and night owl two for ones.....dont have to be an aficionado to know those aren t gonna compliment my scotch....was about to give up when driving past a third..decided to turn around and hope luck was in my favor. i open the door and three steps in i see all the usual cheap tobacco and products.....and lone behold a cabinet humidor of fine quality....and its Christmas after all. the owner of the store is not just a peddler but a consumer as well......a kind man from some type of Spanish decent....i tell him my plans for for the scotch and Christmas he smiles and says ita a plan he may have to copy. at the time cigars were still new to me and i had only smoked a couple real ones with my brothers so i didnt know when i asked him to sell me four cigars that would cover near fifty dollars he would hand me these smooth and mild Arturo Fuentes Chateau Fuente cigars...he over priced me a bit i know now at ten a piece....but they were and still are worth it in an area like this where premium hand made cigars are more difficult to come by....the best part is that its been a couple years i go back...same store...same man....same humidor....guess what half of the same box of Arturo Fuentes....same price.....and after a two year age and a more complex palate these cigars are worth every bit of ten a piece in my opinion once aged move closer to a 93 mark than the mid eighty range they are given so if you have a box let em sit you wont be sorry

I've just been enjoying one of these from a box with a code of August 2008. After 4 years in the humidor this cigar has developed an outstanding smooth and rich flavour profile - aging absolutely smoothes out the harshness of this cigar when young.Presentation: 9/10The cigar comes packaged in a box of 20, with individual stogies wrapped in plastic. Each cigar again is encased in a fragrant piece of Spanish cedar, tied with a green band. I applaud the "mini-humidor" that comes with the box (as to keep the cigars in a climate like that where they are manufactured). Great presentation overall.Initial Impression: 9/10After unwrapping the caffee-au-lait coloured cigar's initial smell carries the typical fragrances of summer hay, and light leather that I associate with this type of cigar, but surprisingly also bright notes of cocoa and vanilla, as well as an almost slightly floral sour tone. Very promising already. My preference for preparing this size of cigar is to punch a hole, rather than cutting the cap. Initial draw fills mouth and nose with a wonderful aroma of fresh summer hay, with a slight sweetness.Lighting: 8/10I proceed preparing the cigar by carefully toasting the foot with a triple-torch butane lighter until the wrapper turns into a sharp line of bright grey ash and the foot itself is charred evenly. Then I light the cigar with four hearty puffs and let it rest for 20 seconds. The flavour profile of the toasted cigar upon lighting instantly reminds me of crushed black pepper, and a note of leather as you'd find in a horse stable in a dry and warm/sunny place. Taste: 9/10The taste of this cigar was absolutely outstanding! The profile changed throughout the smoke from deep earthy tones to sweet coffee, caramel and chocolate. Anything but one-dimensional. Upon exhale I ever so often tasted coconut and vanilla. Very similar to Padron Serie D No.4 - but a tad brighter and more 'sunny'. I obtained the best flavours from this cigar by smoking it slowly, almost like one would smoke a premium Virginia tobacco in a pipe. I could instantly feel and taste when I was puffing too fast and smoking the cigar hot: the otherwise smooth, mellow sweet flavour instantly turned spicy and acrid.Smoking characteristics: 10/10The cigar burned evenly as drawn with a razor down to the very end. With the punch cut, the draw was 100% perfect. The ash is of a fine light grey colour and packed very tight overall indicating a high quality tobacco leaf and outstanding manufacturing skills. Ash fell off the first time after I had smoked half the cigar and boy it was quite a windy day.In summary: The cigar in my opinion perfectly captures the Carribean - the flavour profile vividly produced memories and smells of a stroll across a Dominican beach in the late afternoon sun.