0 cart
account
cigar auctioneer cigar monster cigar advisor close
Cigar Deals!Deals
Shop bydepartment
X
Get Free Shipping
We'll email you a promo code for FREE SHIPPING on your first order of $75 or more, when you sign up for our incredible email deals.
»All Montecristo Brands

Nearly a century after the first Montecristo cigar was handcrafted in 1935, Montecristo 1935 Anniversary Nicaragua cigars represent a first-ever interpretation of the original blend from 1935. But to accomplish such a monumental task, it takes some phenomenal blending talent. Enter the Grupo de Maestros, A.J. Fernandez, and Tabacalera USA’s Head of Product Capability, Rafael Nodal. The real challenge was getting Nicaraguan tobaccos that reflect the classic characteristics, construction, and balanced flavors of the original 1935 Montecristo—a Cuban! Made at A.J. Fernandez’s San Lotano factory in Ocotál, Nicaragua with tobaccos grown on AJ’s estate farms, the blend is hush-hush. But the result is a full smoke with a well-balanced mix of pepper, sweet spice, black coffee, and leather.

Cigar of the Year awards and Top Ratings

A number of publications produce annual cigar of the year awards, however none are more recognized than the top 25 cigar list created by Cigar Aficionado Magazine. The 1935 Anniversary Nicaraguan No. 2, was awarded the #2 Cigar of the year in 2021. They also rated this top quality smoke a 95 out of 100, which is an astounding, but for good reason! Don't take their word for it, try it yourself and let us know what you think by rating it here on Famous Smoke Shop.

“To honor the age-old tradition of soft-pressing cigars, the Montecristo 1935 Anniversary Nicaragua will also be a soft-pressed series,” said Nodal. “The cigar offers a luxury showcase from seed to smoke that combines classic craftsmanship and extra-aged estate tobaccos from Nicaragua’s best growing regions.” 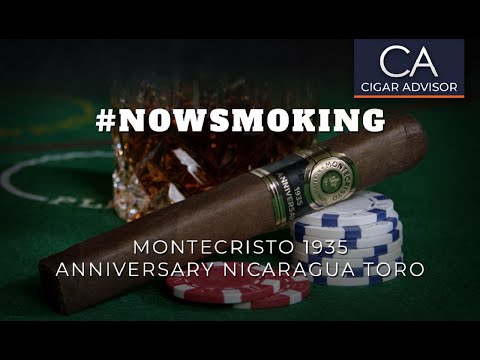 100% of reviewers recommend this product
5.0 stars
Outstanding!
for Montecristo 1935 Anniversary Demi
by Matthew Wierman in Mlps. Mn. on February 18, 2022

Full bodied and full flavored from start to finish. Certainly one of the best Montecristo cigars ever if not the best. I prefer the smaller ring cigars because the flavor of the wrapper is more prevelant. If you enjoy full favored cigars then this is definitley a must smoke! Thankyou!

Padron 1964 Maduro s have been my favorite cigar for years ... lately I find myself reaching for the Montecristo 1935 over my beloved Padrons ... hmmmm

Other Brands By Montecristo