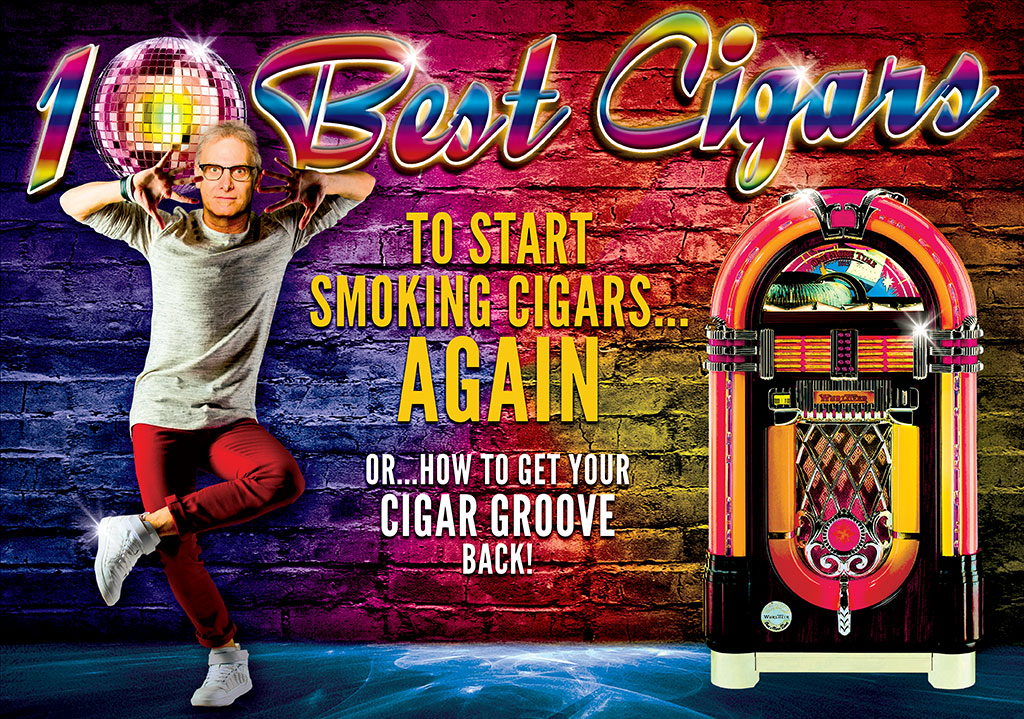 (Or, How to Get Your Cigar Groove Back)

Have you ever found yourself having to stop doing something you really enjoy – like enjoy…a lot? Slamming on the brakes can be pretty devastating, and not knowing when you’ll be able to return to one of your favorite activities can be equally frustrating. Well, I’ve been there.

I smoke cigars for both enjoyment and a living, and for me it was a screwy streak of health issues that prompted a nearly six month hiatus. Moreover, I bet there are at least a few of you who’ve had to give your cigar cutter and lighter  an extended vacation whether it was absolutely necessary or simply voluntary. Sound familiar?

Well, after I recovered, you can imagine how much I was itching to get back to the flavor and aroma of a fine cigar. Besides, I had received a lot of new cigar releases to review and my humidor was almost stacked to the rafters.

Since it would be sort of like starting over, I thought about what cigars would be best to recapture my groove when it was time to start smoking cigars again. Which cigar would be my first? Which one would follow that, and so-on, until I had a virtual list in my head.

The list didn’t have to be just for cigar smokers who’ve been sitting out the game for a few weeks, months, what-have-you; it could also serve as a guide for new cigar smokers who might be interested in a roster of so-called, “starter cigars” that range from mellow to full-flavored smokes at-a-glance.  The result?

Ten cigars that include a lot of my personal favorites, some I’d been curious about, and some new cigars that I hadn’t gotten around to.

There’s no article in the cigar-smoking constitution that says new cigar smokers have to choose something from the mellow column when they start smoking cigars. But whether you’ve been intentionally resting your palate for a while or recently decided to take the plunge, starting with a lighter smoke will help flex your taste buds, and prepare them for the sequence that follows.

Draped in a plush African Cameroon wrapper that caps a blend of Nicaraguan and Honduran long fillers, this tasty morsel from Toraño has always been a reliable favorite of mine for its smoothness, balance, and chorus of sweet cedar notes that sing from end-to-end. Whenever I’m in the mood for a change-of-pace cigar, the 1916 Cameroon Robusto has never let me down, which is why it’s a great choice for first in the list.

Considering Joya de Nicaragua’s reputation for hearty smokes, I found this cigar to be a really pleasant surprise. Finished in a buttery Ecuadorian Connecticut wrapper, the Cunning Toro’s Nicaraguan core gives it a slight turn up in volume. The well-balanced smoke issues notes of earth, white pepper, and cedar with hints of nuts and caramel making their presence known along the way. If you want a little more spice in a mellower cigar, Cunning’s got it, and the price is nice, too.

Here’s one that continues to impress me. A 5-year-aged Ecuadorian Sumatra Rosado wrapper caps a well-rounded filler blend that kicks-off with some sweet spice, cedar, and pepper enhanced by chocolatey aroma. Moving down the line, the cigar locks-on to a continuous stream of pepper and cedar as notes of coffee, leather, sweet spice, and tart fruit slip in at various intervals. All I can add to that is, if you’re going to start smoking cigars that are a little richer – the Rocky Patel Rosado Robusto is a great training ground for discovering what “complexity” is all about, too.

As an admirer of Cameroon wrapper, I thought this modern classic from CAO would make a good groove restorer. Placing an African Cameroon wrapper and binder over Nicaraguan and Colombian tobaccos, the CX2 Rob (short for Robusto) offers a voluminous and velvety smoke with an amalgam of earth, sweet cedar, nutmeg, some herbal notes, and dried fruit. Hints of leather, coffee bean, and honey also work their way in along the journey making the CX2 a delectably versatile treat you can enjoy morning, noon, or night.

I was introduced to this figurado by one of the guys I work with some years back, and it’s become one of my regular go-to’s. The 6000 draws perfectly, issuing gobs of that signature Padron character – earth, cedar, coffee bean, cocoa, and spice – plus, the maduro wrapper brings some added sweetness to the table. The smoke is full-bodied, but never becomes top-heavy. As Nicaraguan puros go, you can’t miss with any Padron cigar, but the 6000 maduro is especially distinctive within the brand’s core line.

This is one of the newer cigars I missed during my hiatus and was really looking forward to. Teaming-up with Dr. Alejandro Martinez Cuenca of Joya de Nicaragua Cigars, La Vencedora (“The Victor” in Spanish) is a puro and what Villiger has dubbed, their “first full-bodied cigar.” Full-flavored is more accurate, since the smoke stops short of absolute full while cranking-up the volume on complexity and depth. Skillfully rolled in a dark, opulent Habano Oscuro wrapper, the cigar opens with an earthy-peppery overture, then transitions to some citrusy elements escorted by syrupy flavors of honey, caramel and cinnamon. The voluminous smoke becomes bolder and spicier in the last act for a stunningly scrumptious finale.

I took to this Perdomo line extension immediately and fell for the Sun Grown Epicure, which is now a staple in my humidors. However, I was curious about the 20th Anniversary Epicure in the maduro wrapper because it has a Nicaraguan-grown Broadleaf that I’ve enjoyed on some other Perdomo cigars. In this case it’s a toothy, high priming, barrel-aged leaf. The smoke has a lush, creamy texture loaded with caramelized flavors of cedar, coffee, cocoa, and a more generous helping of pepper and sweet spices. Here again, the cigar is more full-flavored than full-bodied, making this maddie well-equipped for cigar smokers of every experience.

I think I’ve had just about every Camacho cigar in the core line, but the Ecuador has always been a standout for me due to its big bucket of flavor and superb balance. Capped in spicy Ecuador Habano wrapper, this vitola has a sharp Cuban-style box-press that makes it even more mouthwatering. I also like the use of the Brazilian binder and Honduran-Dominican core, which gives this cigar its startling complexity. Kicking-off with earth and pepper, the smoke gradually settles down to reveal a tapestry of oak, leather, some fruity tanginess, nutmeg, and other spices with some light pepper on the finish. Best enjoyed in the late afternoon or evening.

For the past few years, I’ve been trying just about every premium cigar with a Mexican San Andrés wrapper I can get my hands on. What can I say – I’m practically addicted to the leaf’s naturally sweet-spicy flavor. Not all have been hits, but this new RoMEo blended by the gifted AJ Fernandez is a knockout. The Toro is solidly built and the wrapper is closer to an Oscuro in color. The pre-light offers a good indication of what’s to come with faint notes of coffee and bittersweet chocolate. The cigar is front-loaded for an exhilarating earth and pepper combo when lit, but once that fades, the curtain opens on notes of nuts, leather, coffee, tart fruit, white pepper, and plenty of sweet spice from foot-to-head. This is a primo tobacco banquet that should be enjoyed when you have a good two hours to appreciate it.

Finally, the Encore is another one of the new cigar releases I couldn’t wait to try. This all-Nicaraguan blend is deftly handcrafted and box-pressed with tobaccos aged in palm bark bales, or tercios. This traditional Cuban method draws much more flavor out of the tobaccos, and when done by Ernesto Perez-Carrillo, well. . .nuf’ said. When lit, the smoke offers a distinctive aroma brimming with a toasty and sweet-woody redolence. Out of the gate come notes of earth, pepper, cedar and spice that constantly shift positions like a horse race keeping the palate entertained without ever losing their balance. Although he named it “Majestic,” Ernesto could just as easily have called it “Magnificent.”

Once again I’ll make the suggestion that when you have recommendatons like this, Famous-Smoke should put together a sample pack of them to make it easy to get them. I for one would always be inclined to make that puchase.

Hi Dennis. Actually, that’s a great idea. Thing is, since the Feds put the Deeming Rule into effect in 2016, we can no longer make new samplers. Keep fighting for your cigar-smoking rights!

Had a similar thing going from mid-February until early May this year. Convinced myself I was okay and smoked a couple during, but paid for it. Started out as a nasty cold and finally figured out I had an allergy I never had before. Couldn’t wait to smoke again and been making up for lost time ever since. Nice article on something I never really considered before. Nice choices too.

Nice to know you can relate. Breaks are OK every now and then, but I hope I never have to go through one that long again. ;-)

It’s nice to see a list that includes smokes I can actually afford, and have enjoyed. I did not realize when I started this enjoyable ‘habit’, it would take me so long to find cigars that I enjoy enough to buy more. A couple of my regular smokes made this list.

Glad to know that. That’s one of the reasons we created this site. Hope you found some good ones that you can enjoy on a regular basis.

5 Pros: Tricks to Cleanse Your Palate Between Cigars