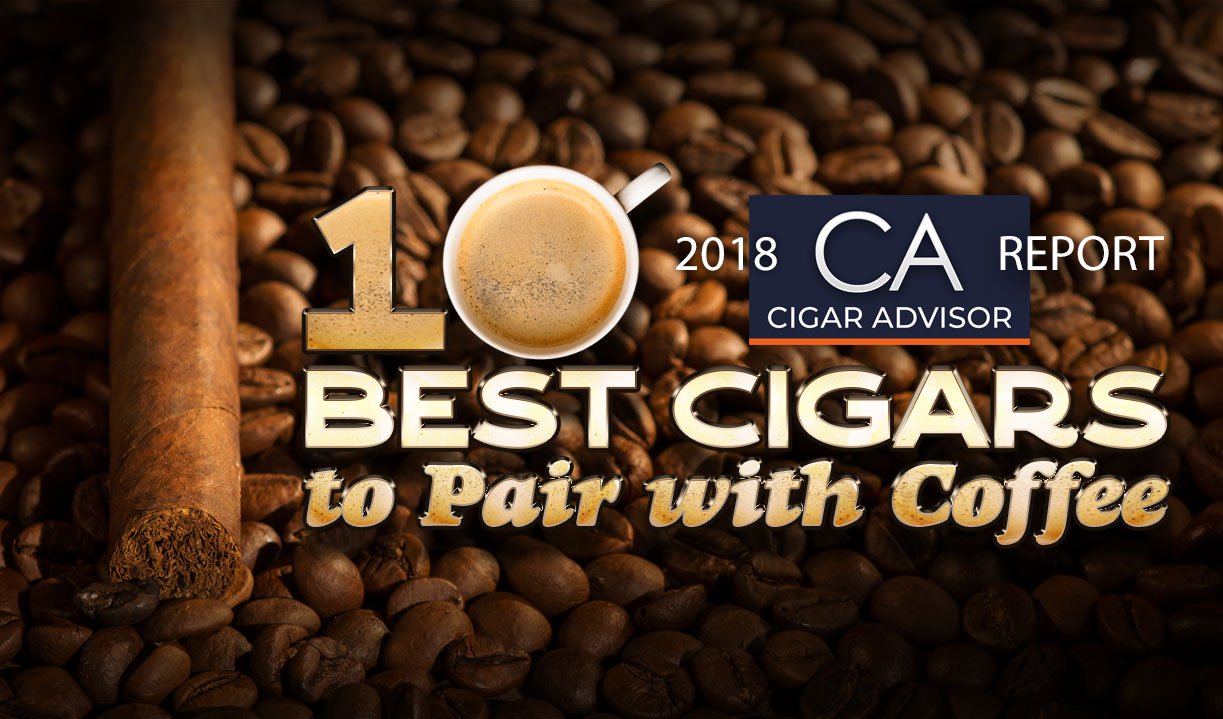 It is the second most traded commodity on earth and we Americans drink 400 million cups of it a day (that’s 146 billion cups a year, an average of 3.1 cups per person). It’s coffee – the magical brown elixir that wakes up more than half the country every morning. We love the taste, we love the aroma, and most of all we love the jolt of caffeine it provides. In fact, the majority of all caffeine worldwide comes from coffee. And while we in the US are gaga over our mugs of morning goodness, Americans are only in 8th place of coffee consumers: the Scandinavian countries of Finland and Sweden top the charts, as the Finnish folks purchase an average of 22 pounds a year per person.

Whether you add milk, cream, or drink it black – add sugar, stevia, honey or butter (yeah, butter – weird, but true) people worldwide are insanely passionate about their daily cups of Joe. Now, the readers of this magazine are insanely passionate about their cigars. So, when you pair the two, magical things happen to the taste and olfactory senses. Many, including myself, will tell you that coffee is our favorite drink to enjoy with a good premium cigar. Coffee, coffee bean, and espresso are notes that you will find in the flavor profiles of many cigars, which is just one of the reasons they pair so well. I personally enjoy the ritual of an after-dinner smoke, a hot cup of java, and oftentimes I’ll imbibe a nice Tawny Port wine to give an added belt of sweetness. And on a hot summer night, a tasty cold brew always hits the proverbial spot.

Whether you like light, medium or dark roast, there’s no wrong answer, but what many people don’t realize is that lighter roasts are more acidic with a sharper taste than dark roasts. And, darker roasts actually have less caffeine than lighter roasts. But it’s not the roast alone that determines the taste of your coffee. Where the beans come from determines the flavor, which has an interesting parallel to cigar tobacco. Beans from Indonesia will produce a very different flavor than beans from Brazil, even if they’re both French roasted. Much like a ligero leaf grown in Mao in the Dominican Republic will produce a different flavor than the same type of leaf grown on the isle of Ometepe in the middle of Lake Nicaragua.

Another reason that the pairing of premium aged tobacco goes well with your freshly brewed java is the dynamic combination of caffeine and nicotine, giving you a nice little feel-good buzz. But the trend as of late is for an even bigger buzz for your body and brain, as highly caffeinated coffees have become all the rage. Popular brands like Raw Iron Coffee, Death Wish, Bulletproof and Rocket Fuel have captured the market, becoming a newer and tastier choice, replacing sugar-laden energy drinks for many.

There’s even more reasons why coffee is a feel-good drink, as some of the proven health benefits for consumers include: Improved energy levels and brain function, helps you burn fat, can drastically improve physical performance (many weightlifters and body builders drink coffee right before their workouts), supplies the body with some excellent nutrients, can lower the risk of type 2 diabetes, it may help to protect your liver, and may even lower the risk of certain types of cancers. Wow.

Now, interestingly enough, some of the top coffee producing nations are cigar tobacco producing nations as well, including Brazil, Nicaragua, Honduras, Mexico, Indonesia, Peru, Colombia and Costa Rica. And because I love this drink and smoke combination, I give you below, ten cigars that I not only thoroughly enjoy on their own, but these flavorful sticks pair wonderfully with a good cup of coffee any time of the day.

The 601 Green has been one of my favorite Erik Espinosa made cigars for a long time. It’s dark, rich and full-bodied as all hell but not too strong by any means. That oily Oscuro outer leaf is simply gorgeous as it begs you to pull it from the box. You definitely get a jolt of coffee on the palate along with dark chocolate, as well as an incredibly toasty aroma. Get your mug of Joe ready for this one.

I’ve been smoking this cigar since the late 90’s and for a good reason – it is just consistently one hell of an excellent smoke. After rolling, the Signature is aged for half a year in cedar-lined aging rooms, giving them a wonderful cedary taste and aroma, along with notes of cocoa and a naturally sweet nuttiness. And that Cameroon wrapper gives off a toasty scent that even has my wife telling me it smells good – and THAT is a rarity, my friends.

When this dark and oily beast was introduced only a few years ago, I proclaimed it as my cigar of the year in Cigar Advisor. The outside is covered with thick,  luscious broadleaf from the fields of Pennsylvania, and the filler features a Corojo that’s been aged for 6 full years and then stored in bourbon barrels which makes for both amazing flavor and the aroma on the pre-light.. There’s a delicious sweetness to this beefy stick with notes of espresso and a really nice spiciness.

The encore to the Flathead line is the Steel Horse, an earthy, hand-rolled gem with some really big flavor. While the glistening Connecticut Habano Broadleaf outer with its flattened head makes a statement, just light one up and that statement intensifies a whole lot more. There are complex notes of very dark chocolate, spice, wood, and coffee, which make this pair so well with a nice espresso. If you haven’t tried this one, I’m making a big-ash recommendation.

For those of you that were under the assumption that Davidoff cigars were mellow and without much depth, well, I’d like to introduce you to the Millennium, a full-bodied masterpiece with deep, delicious complexity. That Ecuadorian wrapper is super dark and oily and this primo stick looks like a delectable chocolate bar. Solid notes of espresso, chocolate, and black cherry jump out as you smoke it slow and savor every damned puff. Expensive – yeah, but a great reward for a day well lived.

So, I’m betting that most of you may not have tried this gem, or even heard of it for that matter. It’s really a great smoke that I always pair with a good cup of java. Medium bodied, earthy and sweet, and there’s a nice little complexity, spiciness and creaminess. Creator Omar de Frias actually worked for NASA, but you sure as hell don’t need to be a rocket scientist to enjoy this terrific, well-made premium.

AJ Fernandez is at it again with this absolutely delicious, slow burning beauty. It’s kind of a departure from what you might expect from the people at Hoyo de Monterrey, but a pleasant departure at that. There’s a wonderful complexity with notes of cedar at the start as it morphs into flavors of mocha and dark roast coffee, so I say pair it with a richer coffee and you’ll be livin’ large.

This Inferno is exclusive to Famous Smoke Shop, created by the masters of Oliva, and if you like their Master Blend cigar, you’ll really dig this one at a very nice price point. The torpedo is a box pressed stick with a dark Nicaraguan Broadleaf wrapper and it smokes like a dream. There’s a consistent woodiness throughout along with some tangy citrus-like notes. I had this with a nice espresso the other night and I was in my own little slice of heaven.

Right now, I’d have to say that the Tatuaje Black is my favorite cigar from Pete Hassell Johnson coming out of Don Pepin’s My Father Factory in Nicaragua. The Sun Grown Nicaraguan wrapper is shiny and supple and you might just stare at this work of art for a couple of minutes before cutting and lighting. It’s almost like smoking espresso, as this decadent tobacco treat lasted me a good hour and a half. What a triumphant creation.

I’ve smoked a lot of these cigars and have personally told Nick Perdomo that I get an absolutely delicious flavor of coffee beans all the way through, much like when you open a bag of whole beans and take a deep whiff. The luscious Sun Grown outer leaf has been aged for six full years and then aged in bourbon barrels for an additional ten months, creating a flavor profile that is truly sensuous. This medium to full-bodied all-Nicaraguan cigar delivers spicy notes and a touch of sweetness from that barrel-aging process. I can honestly smoke this stick every damned day.

So, there you have it, some interesting stuff about the drink we love and ten glorious cigars that pair so well with them. I’d love to hear your comments below as well as the cigars you pair with a great cup of coffee.

Great article! I usually smoke a Papas Fritas with a latte or Mocha for my morning ride every morning. I think it pairs well. If anyone tries it I hope you like it.