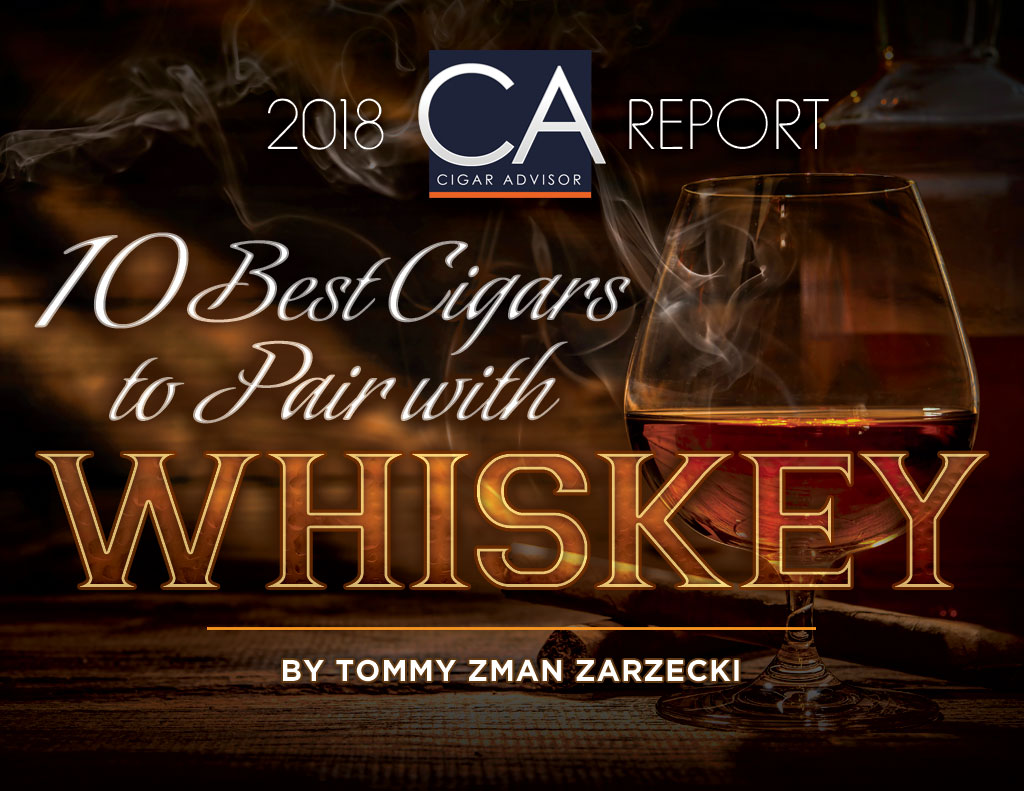 Cigar smoking is my love and passion. Having a belt of good whiskey with my cigar elevates it to “Heaven on Earth” status. I thought it would be a nice idea to match up some good cigars with different types of whiskies I enjoy, to give a sense of what generally pairs well with what. While I’m admittedly no “expert” on malted and unmalted grains, I sure as hell know what I like, and from being in the cigar biz I have gained pretty good knowledge when it comes to detecting body and flavors. So below I give you different whiskey types, their attributes, and a couple of premium hand-rolled sticks that I feel pair well.

The Whisky Advocate says that whisky (or for us uncultured commoners, “whiskey”) is a distilled spirit made from fermented grain and typically matured in wooden containers for some period of time. Let’s take a look at four whiskey types to match our cigars with: Scotch, Bourbon, Irish, and Rye. (Scotch will cover 2 areas: sweeter/lighter and the peaty/smoky type.)

The unique attributes of Scotch whiskies are: Created in Scotland…distilled at least twice but can be up to 20 times…made with malted barley…matured for at least 3 years. While a good number of countries produce what they call Scotch whiskey, only real “Scotch whisky” is made in Scotland. The two big distinctions in the world of Scotch are single malt and blended. Some feel that single malt is all there is and would rather die a slow and agonizing death than put a blended dram to their lips. But, alas, I am not a snob by any means, and I’d gladly take a belt of Johnnie Blue any day of the week.

There are 5 regions where this golden nectar is produced, each with its own characteristics: The Highlands, The Lowlands, Speyside, The Isle of Islay, and Campbeltown.

The Highlands – It is the largest whiskey making region in Scotland producing full-bodied notes, some on the smoky/peaty side and some not as much. Some popular distilleries: Dalmore, Glenmorangie, Ardmore and Oban.

Islay – These whiskies are known for their strong and smoky flavors, and those flavors are believed to come from the higher winds and the seas of the western coast. Some popular brands: Ardbeg, Laphroaig, Lagavulin, Bowmore

Campbeltown – These Scotches have a peaty/salty character. There are three distilleries: Springbank, Glen Scotia, and Glengyle.

First we’ll pair a good Speyside with a couple of nice sticks. I’m a fan of Macallan’s and Balvenie 12 Year Old DoubleWood which is aged six years in oak casks and then six years in sherry casks. It’s the sherry casks that give it a wonderful sweetness while the oak imparts a vanilla quality. Note: Balvenie 21 Year PortWood outrageously good (and outrageously expensive) is aged in port wine barrels for a smoothness that is truly to die for. I would pour this on my breakfast cereal if I could afford it. Onto the cigar pairings…

The rich, sweet flavor of that shimmering Connecticut Broadleaf Maduro wrapper aligns itself so well with the natural sweetness of a sherry cask Scotch whisky like Balvenie. It’s earthy and dark chocolate flavor profile deriving from its Nicaraguan core makes this like having a fine dessert with your after-dinner libation.

While Rocky makes several outstanding smokes, the 15th may be my fave, and it’s an outstanding choice to go along with a Macallans 12, or better yet, a Rare Cask if money is no object. The cigar is complex with notes of coffee bean, leather and cocoa, and a sweet spice comes from that dark, and magnificently oily Ecuadorian Habano outer leaf. Utopia, right here.

This is one hell of a cyclone of flavor, utilizing tobaccos from 5 different cigar producing nations (the spicy Brazilian brings it up a notch). It’s quite full-bodied and rich, and with distinct notes of dark chocolate, espresso, and charred wood, it really stands up well to the complex smokiness of say a Laphroaig or a Lagavulin.

This may just be the deepest, richest, and fullest bodied smoke that has ever been introduced from the Punch line and it’s the perfect type of stick to hold up to the peatiness of an Islay. While there’s a spicy, earthiness throughout, the dark and oily Connecticut Broadleaf Maduro wrapper gives it a touch of natural sweetness. You’ll thank me for this one.

The unique attributes of Bourbons are: It must be made in the United States…it is aged in new, charred oak barrels…must be a minimum of 51% corn, but is generally as much as 70%. Approximately 95% of all bourbon is distilled in Kentucky. It’s a naturally sweeter whiskey, getting that characteristic from the corn. It’s also aged in charred barrels which gives it a caramelized flavor along with some nice smokiness. A few well-loved bourbons include: Woodford Reserve, Makers Mark, Jack Daniels, Buffalo Trace, Knob Creek, and Jim Beam.

The fact that these outstanding sticks are fermented for 14 months in bourbon barrels is one good reason this combo pairs so well. The Nicaraguan core gives this its full-bodied flavor and aroma, and the luscious premium Habano wrapper imparts delicious notes of cedar, coffee and nuts. A sublime match-up.

This hearty offering has impressed many in the cigar world with its deep, full-flavored richness. It’s leathery and chocolatey with that Nicaraguan leaf inside and out, but this stick sports a rare second binder hailing from Honduras, bringing out a smoothness on the palate that matches excellently with a tasty bourbon.

The unique attributes of Irish whiskies are: They are distilled only in Ireland…it is distilled 3 times…made from unmalted barley…matured for at least 3 years. Many good Irish Whiskies have a perfumery aroma, are very smooth and exude a spicy taste with nuttiness. Some well-known Irish Whiskies include Jameson, Bushmills, Tullamore Dew, Redbreast, and Tyrconnell. Onto the best cigars to pair with whiskey from Ireland…

This is just a gorgeous looking cigar done up in it’s handsome box-pressed form. While these boast some spicy Honduran filler tobaccos, they are wonderfully counterbalanced by a silky, Ecuadorian wrapper leaf that delivers a slightly sweet nuttiness to a very happy palate. You’ll be surprised how well this pairs with a good Irish whiskey.

Here I give you, yet another Ecuadorian Connecticut wrapped stick, but never let this one fool you as being mild because that inner blend of Criollo and Corojo give this cigar an awful lot of flavor. And with notes of nuts, cedar and sweetness from the outer leaf, it matches up so well with a nice Jameson or Bushmills, especially the higher end offerings.

The unique attributes of Rye whiskies are: It must be made in the United States…it is aged in new, charred oak barrels…made from 51% rye grain…matured for a minimum of 2 years. It’s the rye grain that makes American made rye spicier than other whiskies. Some favorite American ryes: Bulleit, Templeton, Whistle Pig, Michters, and Willett. Onto the cigar pairings…

The same people who create and roll the Oliva Serie V and the Master Blend Series, make this exquisite flat, oval-pressed treat. While the inner Nicaraguan ligero gives this some spicy kick, the Nicaraguan broadleaf wrapper brings in a subtle sweetness that combined amazingly with the Bulleit Rye I was reveling in. This is one smooth cigar with a hell of a lot of flavor.

This company makes outstanding cigars in their Dominican factory, and the Sun Grown is a really nice choice to pair up with a flavorful rye whiskey. The subtle spiciness of a Bulleit or a Whistle Pig blend well with this cigar’s leathery, peppery notes and creamy texture. It’s medium bodied, which won’t overpower the taste of your drink. So good.

Well, that’s it guys, my officially unofficial guide to pairing some superb hand-rolled smokes with your favorite nectar of the gods: nothing but the best cigars to pair with whiskey. As you can tell, I spent some time on this one, so, I’d love to hear some of your thoughts and favorite pairings in the comment section below!

Love good whiskey and a great cigar. My favorite lately is Jack Daniels #27 Gold. It’s charcoal filtered, like all Tennessee whiskeys, and oak barrel aged. Then it is aged again in maple barrels. Two cubes of ice and a My Father La Opelencia = perfection.

Zman, you nailed this list! What do you have for pairing with Port?

It all makes sense now. My go to whisky is Laphroaig and my go to cigar is Flathead Steel Horse…

Try the Ardbeg 10 with the Flathead Steel Horse. Ardbeg 10 to me is just the better version of the Laphroaig. Laphroaig is good, but to me Ardbeg 10 just hits the better notes of peat. If you want all the smoke you can handle then the combo listed in the reply and a fire pit, just hit home for all the relaxation.

I guess I’m not much of a connoisseur, because the only bottle of whiskey I have, is a cheap bottle ($19.95) of Fighting Cock 101 Proof Whiskey, and it seems to just go with every cigar I own… Hahahaha…. Diesel Unholy Cocktail, San Lotano Ovel Maduro, and I’m sure you already guessed this one, “Acid Kuba Kuba Maduro…”

That is actually a great combo. Bourbon does not need to be expensive to be good.

Partial to Jack Daniels ( regular… black label ), and a KFC Fat Molly myself

I haven’t come across anything hand rolled that doesn’t go well with two fingers (*holds out index and pinky finger*) of Rebel Yell!

I absolutely love Aberlour 12yr old. And it seems to go perfectly with a Cohiba

Any cigar pairing suggestions for Glen Scotia 15 and Glenglassaugh Evolution? Just purchased those for my brothers and would love to give them each a good cigar to enjoy as well. Thanks guys!

I was in Scotland back in January and brought back some 12 year old Auchentoshan. Paired it with a CAO Flathead 660

Nicely done Tommy. Great suggestions. I just recently had an Asylum Lobotomy with a Bulliet Kentucky Mule. May be my hot weather go to.

I can also say that Cigar smoking is my love and passion because I have an extensive cigar collection. However, I was not good at choosing the right whiskey but your blog helped me.

How to Make a Manhattan + Cigar Pairing Recommendation

5 Cigars That Made My Career: Jonathan Drew