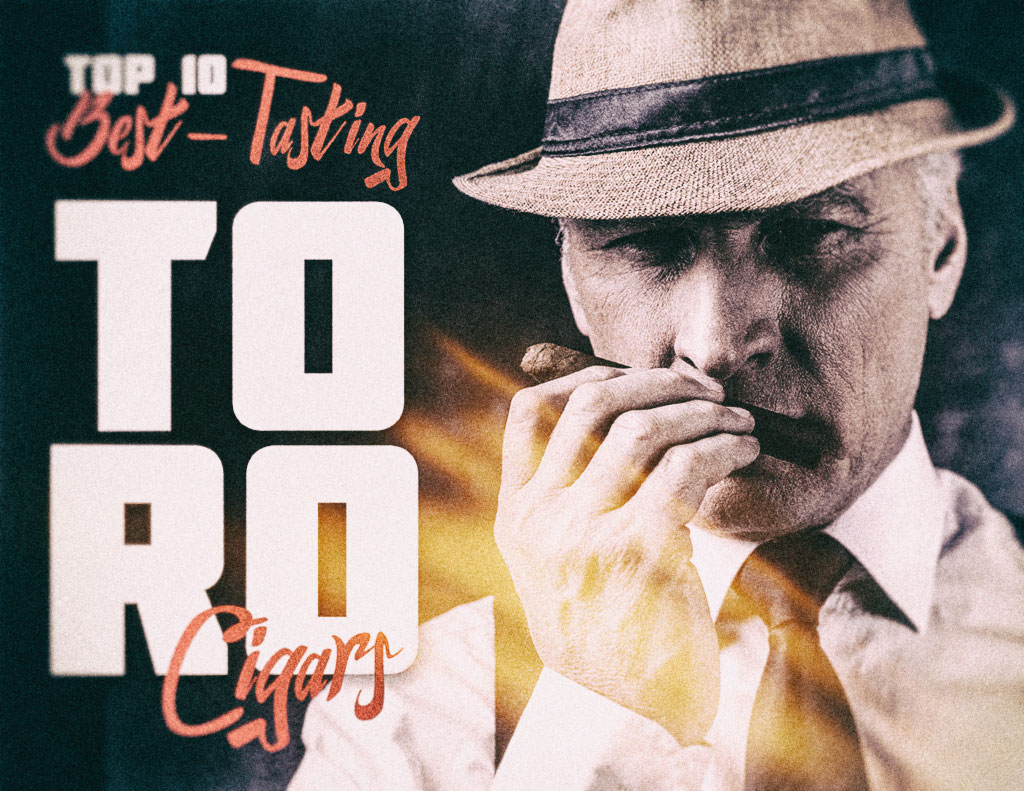 I absolutely love Toro sized cigars. They last around an hour and a half, meaning you get more flavorful smoke time for a few pennies more than a Robusto. It’s the ultimate win-win in my book, and usually the only size I reach for whenever the mood strikes to pick up a fiver or box of cigars. But instead of focusing my efforts and energy on what I love, I’m focusing on what everyone loves as a collective.

What inspired me to come up with this list? It all started in the Cigar Advisor offices where we were talking about the cigars in another article someone was publishing, putting in our two cents each as to which cigars belong in the list. That’s when it hit me that it’s not all about us and what we think is great. It’s really about a collective opinion that makes a “Best Of” list great and all inclusive. So for this list, I’m combining your opinion, as well as my own, to create the ultimate list of Top Ten Tasty Toros.

Narrowing down the list of the tastiest Toro cigars was no small feat; and that’s when we decided to call in the Cigar Advisor Research Team, who was tasked with scouring the customer reviews of all the Toro cigars in the Famous Smoke Shop inventory. They whittled the bunch down to 50 sticks, then cut out the cigars that didn’t have at least 7 reviews. From there, I picked the Top 10 Toros based on taste and taste alone, and voila…a list was born! I was disappointed to have to leave some stellar cigars off this list – and especially disgruntled because some of my all-time favorite cigars didn’t make it on the original list of 50. But out of the thousands of cigars on the market, I had to boil it down to 10…so if you REALLY love a particular Toro sized cigar, and it’s not on the list, name it in the comments below and why you love it.

This was one of the first premium cigars I’d ever tried because they were actually on sale for an unreal blowout price around 4 years ago. Known as one of the best cigars in the biz, I was happy to see this heavyweight at the top of our customers taste lists. This massive double perfecto oozes flavor from its fat core of long-aged full-bodied tobaccos, all wrapped in an oak barrel-aged Corojo wrapper. If you’ve never tried this gem of a cigar, it’s time you added it to your rotation.

The original list I received actually mentioned the Toro Tubo variety of this particular cigar, but because it’s just the same cigar sans the aluminum tube, the un-tubo Oliva Serie O is going in its place. The Serie O has long been a fan favorite, beating the likes of the cigar-of-the-year winning Serie V Melanio in the taste category by customers like you (it wasn’t even on the list!). Comprised of Oliva’s savory home-grown tobaccos, this meaty full-bodied smoke cranks up the yum factor big time with savory caramelized flavors with hints of wood, spice, and cream throughout.

Presented in a box that looks like it’s straight out of the 1960s, the Hoyo de Tradicion pays homage to Hoyo de Monterrey’s Cuban roots by recreating the flavor and aroma profiles that have put this company on the map as one of the best there ever was, is, and will ever be. This instant classic utilizes a select blend of longfiller tobaccos wrapped in a Honduran hybrid wrapper that will have you wanting more.

What’s a list without Rocky Patel? To be honest, I only tried this cigar for the first time around 3 months ago, and since then, I can’t stop with this heavy hitter. The Edge line is the stuff of legends no matter which one you try out. But there’s something special about the Battalion and its assault of rich flavors it unleashes on your palate. This is kind of a cheat cigar since this is technically a 6×60, but Rocky calls it a Toro, so it counts. Spicy ligero tobaccos with rich Costa Rican Maduro wrappers join forces for hearty in-your-face flavors that are not meant for the faint-hearted.

I could just write “There’s nothing Perdomo does wrong,” and leave it at that, but my editor insists I write a little more than that. But really, what more is there to say? Perdomo just doesn’t make a bad cigar. Every blend, every variety, every different wrapper is an absolute home run, and the Habano Barrel Aged is no exception to the exceptional quality Nick is known for. Even Cuban cigars have trouble coming close to the rich diversity of flavors found in this luscious Habano-wrapped stogie which is well-aged in oak barrels to bring out hidden flavor notes you might miss if you don’t pay attention. If you want a true example of what a complex smoke is, look no further than the Perdomo Habano Barrel Aged Epicure.

Cohiba Red Dots have been around since the 80s, and have been the standard for non-Cuban cigars ever since. Some say that it’s because you’re smoking a “Cohiba,” that makes this so special, but most will cite this incredible smoke’s elegant creamy and woody flavors with a decadent matching aroma that makes this cigar so incredible. This Dominican-filled flavor bomb screams luxury from the top of its lungs, making this savory treat a must have.

Drew Estate has amassed a cult following of loyal fans who swear by the brand’s desire to be the best in the business. And with the Liga Privada No. 9, it’s hard to blind yourself to why these fans are such big advocates of this brand. With an almost ceaseless amount of smoke that pours off this premium hand-rolled cigar, the LP9 utilizes a 7 tobacco blend to draw out an incredible array of flavors that is simply unmatched. Once you smoke this flavor-filled cigar, you’ll forever be part of the DE family.

It blows my mind that Kristoff isn’t more well-known than it is, and the Kristoff Maduro Matador is a great introduction to what this incredible brand has to offer. With a well-aged blend of Dominican and Cuban-seed Nicaraguan longfiller tobaccos all wrapped in an insanely oily Brazilian Maduro wrapper, these shaggy foot pigtail cigars deliver tones of licorice, nut, spice, and an unmistakable sweetness. You’re not going to want to miss out on this once in a lifetime smoke.

Ashton is one of those cigars that, I believe, embodies the best of the cigar industry. They represent how cigars should be blended, how they should burn, and how they should be rolled. And with a mild-bodied profile, the Monarch is truly a one-for-all premium cigar. Blended to perfection by the Fuente family (yes, THAT Fuente family), these Dominican longfiller treats are wrapped in a silky smooth Connecticut shade wrapper that helps coat your palate in incredibly complex flavors and has an aroma that may just leave you speechless.

I had to add the CX2 to this list as soon as I saw it. It’s one of my absolute favorites, with at least 5 standing guard in my humidor at all times for special occasions. But what does the CX2 stand for? The CAO CX2 is one of a three-line series of cigars that essentially double up on the wrapper leaf by utilizing it on the binder for a double dose of flavorful goodness. In this case, you’ll be met with a longfiller blend of select tobaccos, all encased by a binder and wrapper consisting of the highest grade Cameroon leaf available. The natural sweetness and velvety smoothness of the Cameroon tobaccos play perfectly with the filler tobaccos for an outstanding smoke you won’t soon forget.

So there you have it: 10 tasty Toro cigars you need to try, as rated by customers like you. If you have more than an hour to bust during your down time, any of the mentioned cigars will help you make the most of enjoying your time. Of course, there are a slew of other Toro cigars that simply didn’t make the cut for this list such as the Padron 7000, Tatuaje Reserva Gran Cojonu, Acid Brand Cigars and more – but with so many to choose from, these are sure to get you on the right track of discovering the incredible world of Toro cigars.

the La Aurora shouldn’t have made the list. that’s not a Toro.

My favorite is Camacho Corojo Robusto

I think the Acid Toast or something by Gurkha ought to have made the list.

Thumbs up on the Rocky Edge, Oliva O, and Kristoff. I would have put the Acid Toast and the Esteban Carrera 5150 on there as well, but all your choices are solidly awesome smokes!

I’ve been a huge fan of Kristoff Maduro Matador and the Ligero. You can’t go wrong.

People get their nose out of joint when their cigar isn’t listed, apparently forgetting that taste is subjective.

Reading Time: 3 minutes Diesel, Davidoff and Desert Rose: this weeks Top New Cigars have landed in our humidor, ready to ship to yours! See our latest additions inside…