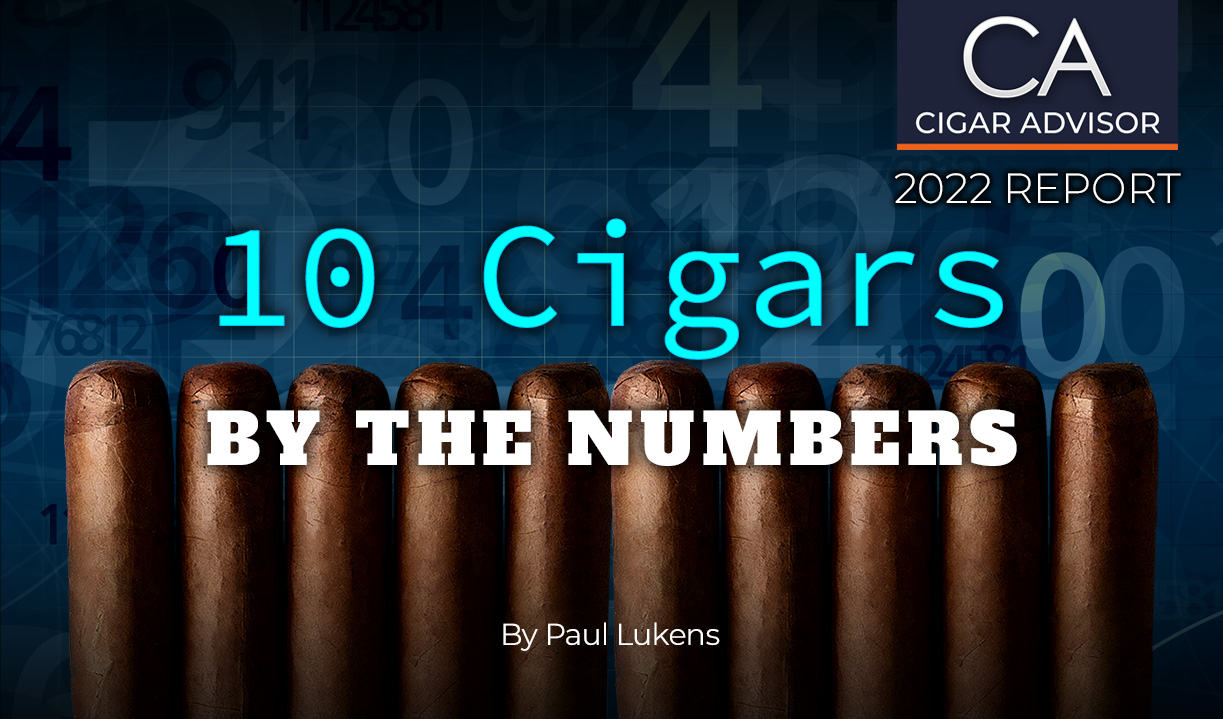 Numbers surround us. Numbers are important. Phone numbers. Powerball numbers. The number 21 in Blackjack. And some sports legends are known by, and associated with, their jersey numbers—like 23 for the Chicago Bulls, 12 for the New England Patriots/Tampa Bay Bucs, and 7 for the New York Yankees. But what about cigars and cigar numbers?

Premium handmade cigars are, in a sense, a numbers game. While cigar ratings and shapes and sizes may immediately come to mind, I’m after something different here. What I’m talking about are cigars whose names contain numbers. And, like the jerseys above, numbers can come to define a cigar. Take, for example, the Montecristo No. 2. You can’t describe the No. 2 without conjuring images of elegance, of smoky boardrooms and overstuffed, burgundy leather chairs.

Below is a simple reckoning of stogies that are defined by their numbers. No bias or favoritism here, just a rundown of the ten best cigars with names containing the numbers 1-10. With that as a guideline, let’s roam around a smoke shop and stock up on a range of premium workman cigars—those great blends that deliver on flavor without breaking the bank. Your ‘perfect 10’ list might come close to something like this.

One is for…101 as in Room 101 Farce Habano, the cigar that marked Matt Booth’s official return to the cigar industry after a brief break. Room 101 is loved for its artisanal blending approach and flavor packed cigars, and the Farce upholds that reputation. Boasting a 5-country blend consisting of an Ecuador Habano wrapper, Indonesian binder, and premium long filler tobaccos from the Dominican Republic, Nicaragua, and the United States, the Farce opens with notes of baking spices followed by some molasses and brown sugar sweetness. Other flavors in the robust profile include nuts, woodiness, and pepper. Enjoyable to the nub, Room 101 Farce is medium plus and approachable for cigar lovers of any experience level.

Two is for…LX2, or to translate, ligero x 2. Ligero is a tobacco priming with thick leaves that’re dark, oily, and loaded with spice—and the CAO LX2 is betting that twice the ligero is twice as nice. When you have a delectable Nicaraguan wrapper over a Honduran binder, hugging a bevy of Dominican Republic and Nicaraguan ligero long fillers, the results are can’t miss, as expected—a full-bodied blend with notes of rich wood, pepper, and an earthy sweetness. Full-bodied, but not overpowering, the CAO LX2 offers a masterclass in subtle and balanced strength.

Three is for… 3rd Degree. No, not the Spanish Inquisition (and I know you weren’t expecting it). Inferno 3rd Degree by Oliva is a spicy and smooth Nicaraguan puro featuring triple fermented premium long filler tobaccos. And it’s that triple fermentation—all the extra time and rotations in the pilones—that deliver a wildfire of spicy flavor tamed slightly with some sweetness of overripe dark cherries. 3rd Degree delivers a richness and complexity that’ll remind you of some of those pricey full-bodied blends on all the best-of lists.

Four is for… Four Kicks. Drawing its name and inspiration from the Kings of Leon song of the same name, this brawny boutique by Crowned Heads is a richly flavored and robust blend with an exquisite Ecuadorian Habano wrapper taking the lead. The feisty Nicaraguan long fillers complete the lineup and take you on a rollercoaster of complexity. The hard rocking, medium bodied Four Kicks offers a refined boldness with notes of cedar, earth, pepper, and baking spices with a bright and clean citrus on the finish.

Five is for…505, which is the International access code for calling Nicaragua, as well as the name of the first Nicaraguan cigar in the rich and storied history of Romeo y Julieta. Blended and produced by the Plasencia family—who may correctly be considered among the elite families in Nicaraguan tobacco—the Romeo 505 delivers a full-bodied profile with rich and spicy flavors. Prepare for a complex and balanced ride with notes of black pepper, coffee, dark chocolate, creaminess, cinnamon and other baking spices, cedar, nuts, and dried fruit.

Six is for…601 Red. Why the Red? Try it and you’ll see, but let’s just start with the oily Nicaraguan Habano wrapper and aged Nicaraguan long fillers. Crafted by AJ Fernandez, 601 Red Label cigars are celebrated for their full-bodied potency and ample and spicy flavor profile with hints of nuts, wood, tea, and earth. Although made by a couple manufacturers over the years, the heart of the 601 Red Label remained consistent—a meticulously blended Nicaraguan flavor bomb that’s affordable. Sounds good, doesn’t it.

Seven is for… 7-20-4. Cigar folklore has it that the founder of the brand, R.G. Sullivan, began the company with winnings from a lottery ticket. The numbers? 7-20-4. A more likely story is that it was named after Sullivan’s cigar factory at 724 Elm St in New Hampshire. Fast forward to the present day and 7-20-4 is a dynamite boutique brand brought back from the dead by Kurt Kendall. This blend comes dressed in a Brazilian Mata Fina wrapper over a Costa Rican binder enclosing a deluxe mix of Honduran, Mexican, and Colombian long filler tobaccos. 7-20-4 is smooth, well-balanced, and earthy, with underlying natural sweetness—in other words the perfect choice if you’re in the market for an affordably priced, medium-plus cigar jam-packed with flavor and complexity.

Eight is for…858, the flagship Fuente for the everyman. This Corona Gorda is topped off with an aged, toothy Cameroon wrapper that hugs a mellow core of Dominican tobaccos. The 858’s flavors include cream and cedar, with some coffee and a touch of sweetness. It’s this well-known and well-balanced collection of flavors that have made the 858 a best-seller for decades. That and its almost ridiculously affordable price tag. This premium is one of the best values around and is the perfect any time-of-day cigar for enthusiasts of all stripes.

Nine is for…1999. This Rocky Patel gem will have you feeling your vintage and partying like it’s 1999. The silky smooth ’99 Vintage Connecticut wrapper sits atop a core of finely aged Nicaraguan and Dominican premium long filler tobaccos. And, as an added touch, Rocky Patel Vintage Connecticut 1999’s are aged an additional 120 days after rolling. Medium bodied, and deliciously smooth and creamy, this cigar is great in the morning with a cup of coffee, or as an enjoyable and relaxing nightcap.

Ten is for…10th anniversary, a milestone anniversary in 2013 for Tatuaje—which I may or may not have called Tatooine’s when they first came out (because I didn’t know how to pronounce them). Pete Johnson and the Garcia family put this small, boutique brand on the map and all these years later that partnership endures. From Miami to the My Father factory in Esteli, Nicaragua—where the 10th Anniversary is crafted—Tatuaje’s maintain their rabid fanbase while still attracting new enthusiasts. This celebratory blend delivers on all fronts and is a must have for fans of Pepin Garcia and Nicaraguan cigars.

I suppose you had no other cigar to use in the 5th spot, but you should have found something else…anything else… other than Gran Habano #5. Especially listed with the others, what an insult. That’s such a big N-O. Just no. And you should probably stop saying things like “creamy smoke”. What a weird statement about burning fermented leaves – and if you refer to the smoke as being creamy then you’re definitely not smoking a cigar.

Brian each his own, I personally love most of the Gran Habanos myself and I’m not alone

And just to note, I’ve experienced “creamy” when smoking a cogar and trying to describe it, as compared to others that are “not”. Again, to each their own.

Reading Time: 4 minutes Cohiba calls it their “most full-bodied cigar to-date.” So Gary invited Cohiba Brand Ambassador, Sean Williams aboard for this review of the Cohiba Royale Robusto. Sure, it’s well made and stunning to look at, but what’s going on inside this 5½x54 vitola? Watch now and see. . .