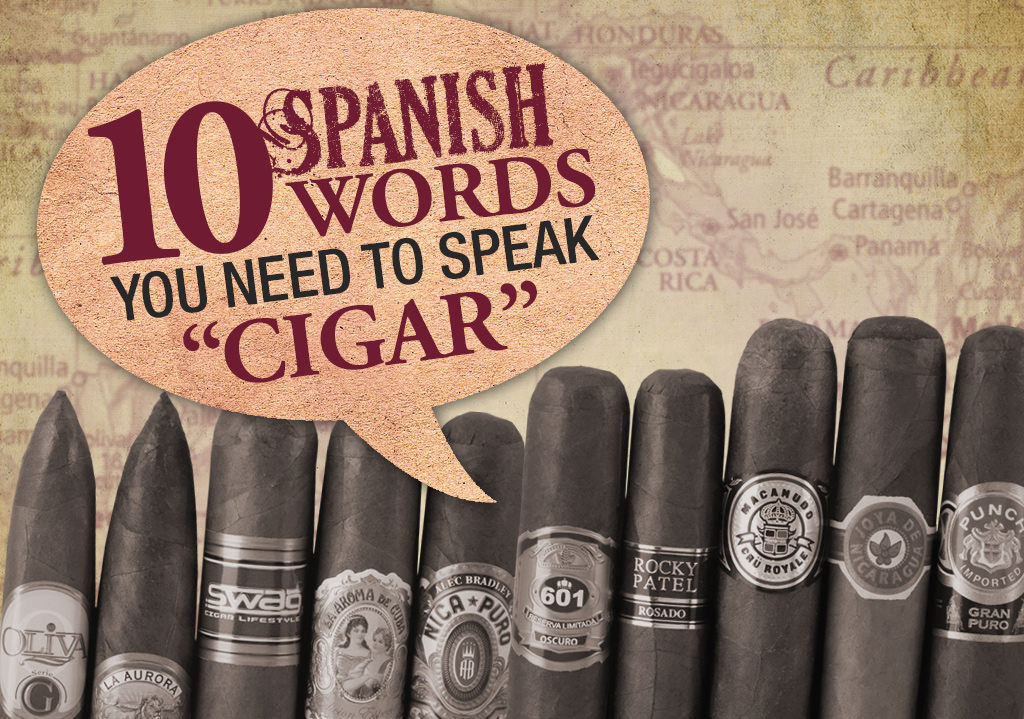 If you’re new to cigars, you remember the first time you strolled into a walk-in humidor…seco, volado, ligero, robusto, Habano, yada yada. Pretty intimidating stuff if you don’t know Spanish, and even worse if you’re not at all versed in cigar-speak. But they all mean something, and can tell you a bit about a cigar before you even smoke it – making it a true adventure each time you try a cigar that’s new to you.

So let’s make for better living…through cigars. Possible? It’s true, friends – see, what people who don’t “get” cigars fail to realize is that, through our common affinity for the leaf, we are expanding our minds and learning things here when we smoke cigars together. For instance – up until right this second, did you know that “olor” is Spanish for “aroma”? In college, that knowledge would have cost you 9 credit hours and $1300. Here, the Spanish is free. Rosetta Stone ain’t got nothin’ on us. So let’s dive into 10 great cigars, and expand your vocabulary at the same time…

There are a few words often used to mean “cigar,” like stogie and stick. But it’s the occasional broad inclusion of “puro” that gets us off track; while all puros are cigars, not all cigars are puros (whaaaaa?). Let’s take Nica Puro as an example: it’s Alec Bradley’s shorthand for “Nicaraguan Puro,” which is simply Spanish for “pure.” Specifically, a pure cigar – meaning the smoke has been blended with tobaccos from only one country. And for the Nica Puro, it’s all-Nicaraguan binder and peppery fillers under a Nicaraguan Habano wrapper that make this sweetly-spicy medium-body winner.

What’s always a challenge when translating between languages is when there isn’t an actual word for the meaning – it’s an “-ish” situation. Rosado wrapper is the “-ish”: it’s sort of pink, but kind of reddish – but more like a rosé wine…so we’ll go with “pink-ish.” The aged Ecuadorian Sumatra wrapper of the Rocky Patel Rosado is obviously brown, but get close and you’ll see a pink-ish hue that’s more of a blush within the brown. Weird? Maybe. Tasty, though. These Rosados match long-aged Nicaraguan and Dominican longfiller that’s both sweet and spicy, and roll them in a wrapper leaf that’s been grown under Ecuador’s natural cloud cover…which is what gives Rosado the –ish.

Time for a Daily Double: Joya de Nicaragua is….not “Joy,” it’s “the Jewel of Nicaragua” – theirs was the first Nicaraguan cigar factory to be opened (in 1968), and JdN cigars were handed out by the Nicaragua President/Dictator Anastasio Somoza as part of his foreign policy events and visits (they were also a staple of the Nixon-era White House humidor). For part II, it’s “cabinetta” that demands a shout out: by adding –etta in Spanish, you make the word “smaller” – in this case, “small cabinet.” It’s a presentation style that features un-celloed cigars in a Spanish cedar box tied together with a ribbon, kind of like a dress box that’s not as fancy. But slide the lid open and bear witness to the JdN Cabinetta, which sports two different wrappers (that’s not a cedar sleeve) and a milder, mellower Nicaraguan blend. You’ll be impressed.

Quick refresher: like the Alec Bradley, we’re tossing around the term puro again – but unlike the Nica Puro, the SWAG Puro Dominicano is (a) not short hand and (b) all-Dominican. What’s really a twist is how much the SWAG smokes like a Nicaraguan: rolled thick with a scandalous amount of Dominican ligero that’s been sourced from a single farm, there is a strength, complexity and smorg of flavors throughout this puro, which also happens to be the original Boutique Blend. So that’s “puro” en una palabra (in a nutshell) – it’s used in conjunction with the country whose tobaccos it’s puro of.

What a difference an “s” can make: “Preferido” means favorite, but “Preferidos” means preferred…in much the same way we’d describe wine as “select” or beef as “prime.” And the Preferidos is both: among La Aurora’s best, these perfectos are rolled of well-aged Dominican, Cameroon and Brazilian tobaccos by expert torcedors at the rate of about 125 cigars per day each. For the bonus round, let’s tackle Maduro…which is Spanish for “ripe,” not “strong” (that’s “fuerte”) – so get that dark-cigars-are-too-strong nonsense out of your head right now. Maduro isn’t even an actual leaf – it refers to the longer and hotter fermenting of the leaf, which actually produces a wrapper cured to give off a sweeter flavor. But can maduro be strong? Sure – but it doesn’t have to be. This #2 is proof.

So we’ve got the puro thing down, right? Almost…“gran puro” can also mean big cigar, which this Punch toro is – nothing less than a 48 ring here. But it fits the definition, being made with rich, spicy yet smooth all-Honduran tobaccos from the San Agustin Valley. But “Gran” can mean a few things: like “great” in a big size sort of way (big taste, big flavor), or in a very good sort of way. So it’s a “great big puro.” Pico Bonito is something else: slightly more than a stone’s throw from the tobacco region is a massive triangle-shaped peak in the Nombre de Dios Mountain Range called… Pico Bonito. The translation is, literally, “beautiful peak” – though pico can also be a beak, a sharp point or slang for your junk…and something tells me they didn’t name the mountain Big Pecker.

I’m putting my money on the fact that you have, or currently do, smoke Macanudo cigars. And you enjoy(ed) them for all creaminess you’d want from a mild smoke. So what makes this, and this extra smattering of Spanish cigar words, different? The “cru royale” treatment. Literally “royal growth” (as in things that sprout from the earth), anytime you see cru royale – or some variation –  we’re talking about a harvest that’s of a more refined, more elaborate and most superior grade. Evidence: Benji Menendez added some exotic Dominican binder leaf (exclusive to General Cigar) to a Nicaraguan/Dominican/Mata Fina blend, elevating the flavor profile far above your usual Macanudo mellowness and wrapping it tight inside Ecuadorian Habano. Impressively well-balanced, stunningly flavorful.

“Belicoso” means aggressive and warlike. Ironic, as cigars are supposed to be the ultimate relaxation device, right? The blend fires a salvo of Nicaraguan Habano fillers wrapped in genuine Cameroon wrapper from Africa in a box-pressed pyramid…and that’s what the shape’s name really describes: a shorter pyramid, with a taper that’s a bit different than what you’d see on your run of the mill torpedo. There’s nothing threatening about this weapon of mass combustion, but the blend brings a bite that matches its bark through a solid medium bodied smoking experience. By the way – these are some of Oliva’s best tobaccos.

As Spanish cigar words go, “La Fuerza” is pretty much 601’s deal: thanks to those guys for being upfront with us about it. Fuerza is the word for strength, force, power – all of which are related to fuerte, which means strong, intense, heavy, loud…you get the picture. But there’s actually a bit more nuance to it, when it comes to cigars. When we talk about strength, that’s a very subjective thing – so it’s better to look at fuerte to mean “full-bodied” rather than “kick ass,” or robust flavors as opposed to clubbing your palate with pepper and spice. And that’s really how 601 Green rolls: absolutely a full-bodied blend, it’s full up on bold Nicaraguan long fillers under a really sharp Nicaraguan Habano Oscuro wrapper leaf that just teems with flavor. Fuerte? Oh yeah.

Here’s the gimme question on the quiz: Edicion Especial – it’s simply Special Edition. You probably knew that already; but like the ability to ask where the bathroom is (“dónde está el baño?”), it’s important to know the basic 101’s. The La Aroma de Cuba (“scent” or “essence” of Cuba, not “smell of Cuba”…they’re vastly different) was an Edicion Especial meant to commemorate something in 2008, but what that was is lost to me. No worries – because what’s important is that the EE is rolled at the My Father factory for Ashton with plump Nicaraguan tobaccos and a tasty Habano wrapper grown in Ecuador. Medium bodied, nicely spiced and an investment in flavor – worth it.

Now I’m not saying you can take your fancy new-found Spanish cigar words and buffed-up language skills and start interpreting at the U.N. – but you should be able to comfortably speak “cigar” next time you hit the lounge. Got any others to add? Comment below…

Nothing to add at the moment other than I enjoyed reading while my Pico Bonito was at rest-HA!

How to Recommend Cigars to Others