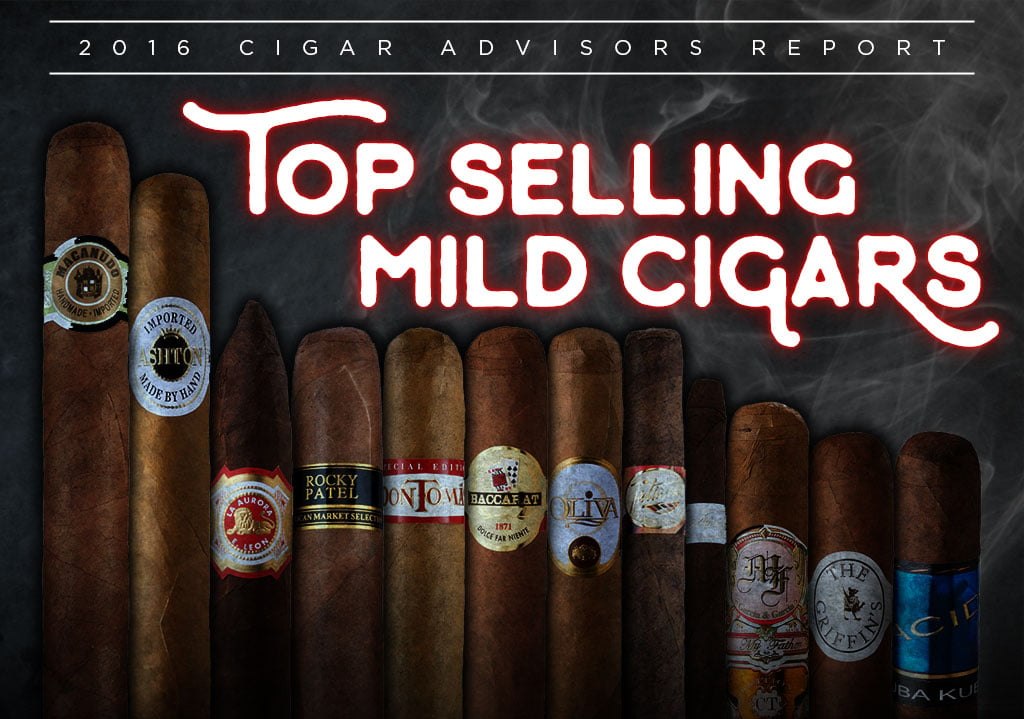 Best Selling Mild Cigars: the 12 at the Top (Plus 4 More to Try)

Say the words, “best selling mild cigars in America,” and you might be inclined to think a few things: first, that these smokes must have been around forever if they’re on a list like this. And second, that you surely must have tried them already.

But what if you haven’t?

I had that surprise earlier this week when I began researching the biggest sellers in America among all of the mild cigars in the business. Of the top 15, I hadn’t smoked 3 of them – and of the rest, a few had been nubbed so long ago I could barely remember what they tasted like until I refreshed my taste buds with a new one. So did I move on from getting my fill of mild sticks too soon?

I don’t think so, as I still revisit the mellower end of the humidor from time to time. But once I was asked to compile this report, I thought it was important to give those overlooked cigars a shot. Because like the books you might see in the “Best Sellers” lists of the New York Times or Wall Street Journal, you have to believe there’s a reason they’re on there.

Once you present someone with the numbers, the list of best selling mild cigars tends to get three reactions out of people:

I think I can speak for most of us here when I say we tend to fall into that last category, because we’re always willing to give a cigar a shot if it comes by way of recommendation. And if we like it, it’s also one of the few times we’ll be ok with someone saying, “See? I TOLD you so…”

So how did these best selling mild cigars get on the list in the first place? Frankly, by being good. It helps that these aren’t brimming with body and strength, which means that many of these selections make for perfect beginner cigars. And once you sensed you liked them, you bought them again and again – and then maybe recommended them to others who might have been starting out on their own cigar journey. And so, the cycle continues. So if you enjoy easy-to-smoke cigars and want to make sure your lineup is complete with the hall of famers, or you’re just on the hunt for something new…try these best selling mild cigars on for size:

The irony: for as mellow as Acid Kuba Kuba is to smoke, fans of this cigar are pretty intense – but it’s easy to see why. An infusion of exotic oils, herbs and essences might be what puts this Drew Estate offering at the top of the list; but even without, this beefy robusto would smoke mild and mellow thanks to its unique mix of Nicaraguan tobaccos under Indonesian wrapper.

In Baccarat’s defense, a sweetened cap makes a nice twist when you smoke this cigar with coffee. That aside, some rip this mild-mannered icon as an “old man smoke”; considering my old man taught me to shoot and fix my car, I’d take that as a compliment. “It is sweet doing nothing,” translates the saying on the Baccarat band – which pretty much nails this whole cigar thing, no?

Rocky Patel isn’t known for his milder fare: he usually bends taste buds like a carnival strongman bends steel. But if you peel back the curtain, you’ll find a guy who’s great at combining Honduran & Nicaraguan tobaccos with a Connecticut wrapper into this creamy-sweet morsel. The Rocky Patel American Market Selection is a surprising smoke, and a top honors taker on our list of best selling mild cigars.

Fans usually talk about the highly-rated, heavy firepower blends that come from their factory; but if voting is done with the wallet, it’s the Oliva Connecticut Reserve that gets the USA crowd’s vote. This Oliva checks all the boxes: smooth, mellow, creamy – and as an added bonus, a touch of rich, earthy flavor. It is an Oliva, after all.

Macanudo Café is the consummate starter cigar; it’s also the ideal golfing cigar, a popular smoke for sharing among friends, for pairing with a lighter craft beer and about 437 other instances and special occasions. Add them all up, and this creamy-mild Dominican rounds out the top 5 best selling mild cigars with ease. Heritage helps: beloved by millions since the mid-1800’s, it’s epitomized the phrase, “mild cigar.”

It’s been a while since I had one of these. But billowing a sweet n’ creamy smoke and a pleasing aroma, the Ashton Classic is proof that cigar smokers who prefer mild sticks can have a celebration cigar to call their own. Lush Dominican flavor abounds with an extra bit of zing, plus a buttery-smooth feel from the US-grown Connecticut shade wrapper; don’t wait for a special occasion to enjoy it.

I’ll give just about any cigar a fair chance, and I like variety. But for whatever reason, the Griffin’s and I just never seemed to have crossed paths. If the same happened to you, then here’s what you’re missing…these best selling mild cigars are mild cigars personified, characterized by a nice, mellow cedary component. That’s a sign of fine Cuban-seed Dominican tobaccos at work, for sure.

As I said before, one of the ways a cigar becomes a best-seller is by being around for years; among La Aurora’s  most heritage selections (and one of the Dominican locals’ favorites) is the La Aurora Cameroon. Steeped in 100+ years of the company’s cigar-making history, these mild smokes dish a mellow Dominican flavor that’s rounded out with a satisfying richness from its genuine African Cameroon wrapper. Bonus: super affordable, which helps its top-seller status.

And now for something completely different…people who opt for mild cigars often do so because they don’t smoke that often, prefer the modest nuances of a mild cigar, or like a smoke that can take on some extra flavor without the fuller body and strength. Or maybe all of the above, depending on who you are. This Tatiana plays to all fields, featuring 2-year aged Dominican tobaccos for nuance, extra flavor from the vanilla blend, and a nice aroma from the Sumatra wrapper – making this cigar a nice occasional treat.

Mild in spite of its 3-nation core blend (DR, Nicaragua, Mexico), Don Tomas Special Edition Connecticut takes the usual creamy flavors found in similarly easygoing smokes like the Griffin’s and Ashton above, and adds an earthy, almost toasty element to the overall taste. Make it more like buttery toast, with the US-grown Connecticut wrapper – a leaf that’s very expensive to grow and use, making the more reasonable cost of these best selling mild cigars a nice surprise.

A mild My Father? Believe it or not, Pepin can play to the mild crowd quite well, thank you. This time out he’s concocted a mild-plus all-Nicaraguan core in which his signature spice is still evident – but through the filter of a slightly darker Ecuadorian CT wrapper, the My Father Connecticut is much more refined. I’ll even be daring and say that even if you prefer medium to full bodied cigars, give this one a try; there’s clear-cut satisfaction to be found.

Many moons ago, the Davidoff brand got its start through custom blended cigarettes; and while you may know them for their super-premiums, this super-slim long cigarillo still speaks the Davidoff name loud and clear. Sporting a mild Brazilian-Caribbean blend, an Indonesian-grown binder and wrapper bring a rich taste that’s a little less velvety than its premium brothers. Think of it this way: did you ever think you could make Davidoff your everyday smoke?

If you’ve tried the best-sellers…

Maybe you have checked all the boxes, and been party to the successes of the best-selling mild cigars above. If you’re now looking to expand your world of mild smokes, or you’re still searching for “the one” to be your first cigar, these will be right in your wheelhouse:

Plasencia Reserva Organica: this mild-medium blend is worth torching up, if being 100% certified organic matters to you; if it doesn’t, the natural-as-it-gets flavor of Plasencia’s well-aged Nicaraguan tobacco is a gratifying experience unto itself.

Montecristo: the legend. Mild to medium with a Connecticut shade wrapper, the buttery flavors transition more to a natural sweetness – which is why this once-Cuban heritage brand has become a mainstay in the mild smoker’s humidor.

CAO Gold: another of the old-school mild standards, CAO Gold has been a go-to on the starter circuit for years. I’ll even guess it was one of the first cigars you ever smoked; if it wasn’t, try it and see why everyone puts this on their to-do list.

Nat Sherman Host: here’s something different…mild Honduran tobaccos fill the core of this mellow smoke, imparting a distinctively different set of flavors from its Dominican counterparts. Nat Sherman’s personal blend, Host has been a fan favorite since the 1930s. Try it and you’ll see why.

Vegas Golds and Varina farms breakfest blends are both hard to beat.

Rocky Patel Vintage 1999….A great mild smoke for any time of the day.

Reading Time: 29 minutes Click to take the Advisors’ virtual Alec Bradley tasting tour: our Guide is packed with quick reviews and tasting notes for 23 cigars, so you can discover what Alec Bradley Cigars have to offer – and choose the one that’s right for you!