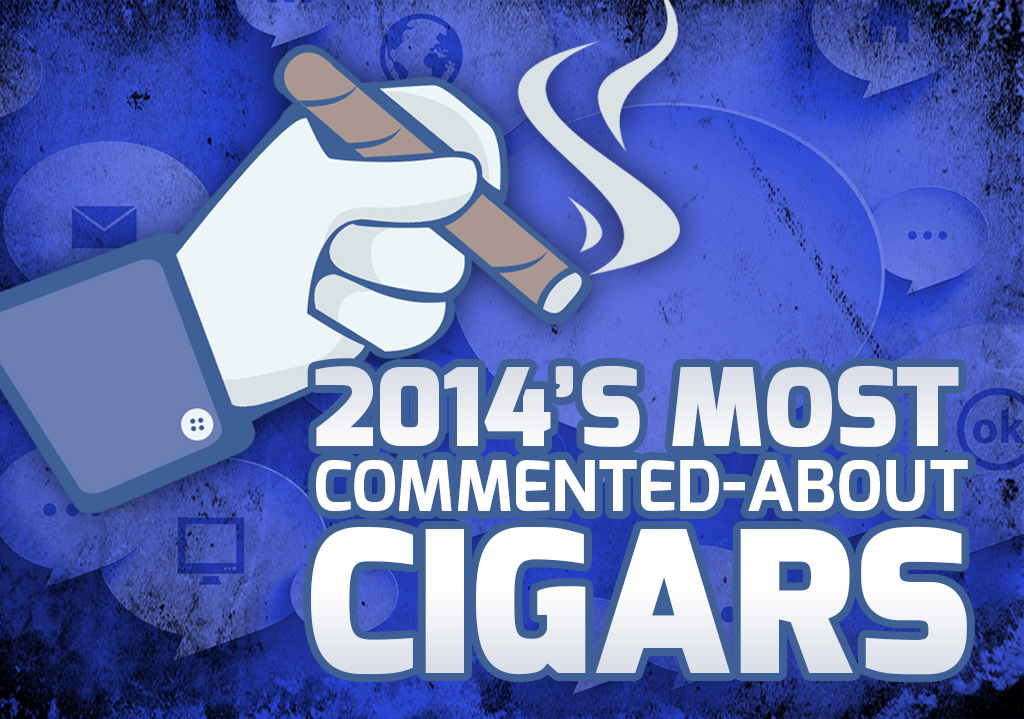 Popular Cigars: the 10 “Most Commented About”

Popular Cigars: the 10 “Most Commented About” Cigars Online

There’s a lot of chatter going on in the cigar industry right now. From the proposed FDA legislation, to the acquisition of Drew Estate by Swisher and Torano by General, the message boards have been lighting up with stogie heads putting in their two cents on every topic imaginable. Rightly so, though. There’s been a lot going on since as far back as IPCPR 2013. We’ve seen impossibly undeniable trends occurring to appeal to the shift in consumer’s palates, which is causing a shift away from more traditional lines, to more unconventional or newer lines. To be honest, it’s a pretty exciting time to be in the cigar industry with so much going on. But aside from all the added fluff on the forums, one thing everyone keeps commenting on, is their favorite new cigars. So based on me trolling almost every forum imaginable, I’m putting up my top 10 list of stogies you have all been talking about that you need to try!

Pete Johnson, man; I don’t think I have to say any more than that, but I sure as hell will. We all know he makes some great stogies, but this one just takes the whole cake and jams it into your face with some primo strength and equally amazing flavor. Originally this cigar was released as a Hawaii-only release and named the Thermonuclear for its strength. Somehow it got to the mainland and soon production barely scratched the surface of the demand for this beauty. After a re-band and rename, the Avion flies high on the forums amidst the chatter about popular cigars.

The beer industry has many blaring parallels to the cigar industry, and the Oktoberfest is the bridge that definitively connects them. This is the second year in a row Quesada has created this pairing gem, and just like last year’s offering, it hits the mark. The cigar is blended so it pairs perfectly with any Marzenbier style brew out of Munich, Germany for Oktoberfest. The only question remaining is why I wasn’t invited to help smoke all the trial blends of this stogie and drink a bunch of beer with each one to see if it pairs well. Quesada, you can contact me via Facebook next year with my invite. Obviously mine for the 2014 blend got lost in the mail, right? That’s what I thought.

A lot of us love Camacho cigars, and for good reason. They’re delicious. BG Meyer cigars, an offshoot of the Camacho line of cigars, are no different. It seems many of you have found this out the easy way by smoking it. And yes, I consider reading reviews to be the hard way. But for those of you who haven’t tried it, all I have to say is this; listen to the reviews. They’re almost all positive. The smoke is flavorful and smoke production is on point from start to finish. It’s earning a lot of attention, and this guy (just pretend I’m pointing to myself) wouldn’t be surprised to find it on some “top cigars” lists in the future.

One look at the boards and forums and you’ll see Liga again and again. Popular cigars to be sure, but they walk the walk. With all the talk about Drew Estate selling to Swisher, it seems a lot of people are buying up “Pre-Acquisition” Liga Privada cigars in the fear that Swisher will make them rainbow colored, pineapple flavored cigars. Nothing could be further from the truth, but people are drawn to joining in on civil unrest when the opportunity arises, I suppose. I know I am. But I have to give credit where credit is due, and I give respect to those that buy the Undercrown. This stogie gets some really high marks and is seemingly loved by all experienced cigar smokers. They’re worth every penny and they’re a personal favorite for me.

I have no idea what kind of Payback Matt Booth is serving up, but if this cigar is any indication, Booth’s #1 nemesis may want to hide out in Azerbaijan for a while until things blow over. Heavy smoke, full-bodied, rich flavors; it’s a total knockout. But be warned, it is for the full bodied smoker and not to be taken lightly, as you can read in plenty of cigar reviews on the forums. But if there’s one on this list of popular cigars I would 100% recommend to my strong stogie loving friends, this is it.

The H. Upmann Banker gives you more ROI than you could ever want for your money. No, that’s not a CT wrapper. That’s a primo Habano wrapper for added flavor and a slight spice. The ladies and gents over at H. Upmann were nice enough to give us a sample of these cigars, and we were all blown away. It seems some of you have taken notice on the forums as well. Again, it’s not one a lot of people have smoked, but there are pages upon pages of people screaming about how bad they want to try them. To those who haven’t tried them yet, it’s about time you invest in some Bankers. This is one investment that pays incredible dividends.

I was hesitant to put Padron on my list because it isn’t a “new” cigar, but it’s still a massive fan favorite, and for good reason. I mean, come on, it’s a Padron! How could you not like them? It seems this sentiment is shared on the forums as well. Every page titled “What are YOU smoking?” features one of these bad boys. It just goes to show you that old dogs don’t need to learn new tricks. After all, if that dog can disarm a bomb and land a jetliner if the pilot ever passes out, what new tricks does it need to learn? That’s already an awesome dog! Padrons are truly epic cigars. Always have been, always will be.

I found this stogie on literally every “Best cigars under $5” thread on the forums. George Rico, if you ever have the good fortune to meet him, is one of the chillest dudes in the industry. Put him and Jonathan Drew in a room together, and it’s like a meat locker. But one of the things he prides himself in, is giving high quality for a low price. Sure, there’s new stuff coming out that blows you out of the water. But a lot of those cigars have a high price tag to match, and we don’t all have that kind of money. George Rico will blow you out of the water, but he won’t mug you afterwards with high prices. The #5 Corojo is proof enough. This is a full out assault on your palate with a full-bodied profile.

This isn’t mentioned much in the “most commented” category of the forums to be honest, but these bad boys are featured in almost every bomb that’s sent between stogie lovers. In case the NSA is reading this: A bomb is simply a gift of cigars from one friend to another. Get off my back, big gubment! This leads me to believe you guys are just re-gifting, or you simply know that every cigar smoker loves these relatively new-to-the-market chew toys. The name says it all; they’re rustic looking cigars, with traditional flavor. Of course they crank that traditional flavor off the charts.

“Flawless,” “Incredible,” Tasty,” and perhaps best of all, “Cheap!!!” are all words used to describe what is perhaps Oliva’s best cigar: the Oliva Serie V. For the sake of this “most popular cigars” list and the generalities of the boards, I’m listing the Natural instead of the Maduro or Melanio, both of which are amazing in their own rights. This heavenly Habano uses only primo Nicaraguan tobaccos and a sun grown wrapper for a long burn time, and really rich flavor. It’s a cigar that rubs the meaning of “full bodied” in your face with some gusto. Before I even checked the boards, I kind of figured this bad boy would be on there. It’s a no brainer.

So there you have it! 10 cigars that you are all talking about on the stogie forums, which you need to have in your humidor. Of course there are a lot of other popular cigars, but by and large, this is what the majority are discussing. This pretty much abdicates me from any ill will any of you may have towards the list since it was essentially created by you. So thank you for taking that kind of pressure off me. As a reward, I will keep on writing the articles you love so much. And as always, happy smokes.

Excellent suggestions! Thanks!! But what’s this about JD selling out to Swisher?

I have only tried 3 of these 10. I would have to agree about the Tat Fausto Avion and the Oliva V. The “V” is, right now, the cigar I daily look forward to. I’ve had one Nica Rustica, but the flavor profile I remember did not suit my palate.
Just last night I lit up a cigar I purchased last month on a whim, the Gurhka Ghost Shadow (5×52). What I read says it’s made with a blend of Dominican and Nicaraguan fillers, a Dominican criollo 98 binder, and Brazilian Arapiraka Maduro wrapper. It’s a luscious, dark cigar whose prelight smell was that of a barnyard. That really made me look forward to lighting it up.
Once lit it provided loads of wonderful smoke, particularly in the first 2/3. While I still have a difficult time picking out flavors (I did taste earthiness, cedar and a little spice.) it was a very tasteful smoke. I went out a bought more in different sizes today. Since that smoke I’ve read other reviews and it appears I’m not the only one smitten.

How to Touch-up and Relight Cigars