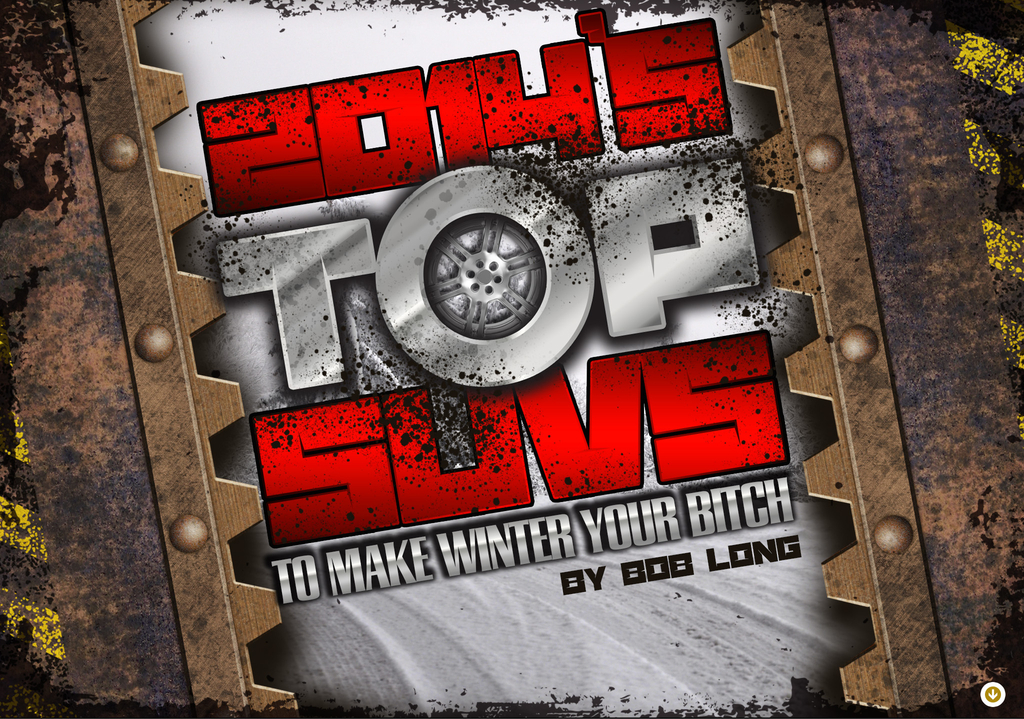 Novelist Robert Byrne once wrote, “Winter is nature’s way of saying, ‘Up yours.'”

That’s a dead-on truth. But that doesn’t mean you can’t flip the odds in your favor and give it right back to Mother Nature, with a hearty “in yo’ face.” No matter how much snow you may need/want to dash through, we’ve lined up five sport utility vehicles (some more sport, and some more utility) that will get you o’er the fields without breaking a sweat – and make winter your bitch.

Having shed 800 pounds from its 2013 predecessor (thanks to Rover’s extensive use of aluminum) the Range Rover Sport has been reborn for 2014. No other SUV in the world combines luxury and elegance with explosive acceleration and brute off-road prowess like this. Step on the “loud pedal,” and the supercharged 5.0 liter V-8 packing 510 ponies will rumble to 60mph faster than a Porsche Cayman. Extreme off-roading, anyone? In the Range Rover Sport, no problem. Its advanced electronic terrain response system and air suspension provides up to 21.5 inches of wheel articulation for off-roading, lifting the Range Rover Sport 1.4 inches for regular use and 2.6 inches for off-road use. The Sport can drive through up to 33 inches of water and blast through snow like it’s taking a Sunday drive, making “over the river and through the woods” more like “a stroll through the park.” Inside the cockpit is leather-lined luxury at its finest, where 007 would feel right at home.

Available outside the US in an insane (my word, but you should use it too) six-wheel form, this is the largest and arguably most extreme SUV to ever hail from Mercedes Benz…Ladies and Gentlemen, I present the Hyper V-8, 536 hp-powered six wheel G63 AMG 6×6. Expected to be produced on a limited basis as of this fall, this colossal pickup started life as a six-wheeled military version of the G320 CDI created for the Australian army. The plush, leather-lined civilian version is designed to appeal to some of Mercedes-Benz’s most affluent clientele. It comes with a four-seat cabin, six driven wheels, low range gearing, five differential locks and a tire-control system for its standard 37-inch wheels, providing what the German car builder calls “the last word in forward thrusting power for the beaten track.” So in other words, “suck it, winter.” The Gelandewagen (German for “cross-country vehicle/wagon”) first debuted in 1979 and was originally built to be part of the Shah of Iran’s Army vehicle fleet; still hand-built in Graz, Austria, the modern G-Wagen is a military truck in dress fatigues. It’s still body-on-frame; it still has a low gear transfer case in unison with three mechanically locking differentials; and it still is capable of driving up a wall. The G is still essentially unstoppable: snow is a non-issue, it’s faster than ever and, in my opinion, just plain ugly. US customers will have to settle for the 4-wheel version in either regular or AMG form.

So crazy German tuner Brabus stuffed a 750HP 6.3-liter Biturbo V12 into a GLK and raced it around the Nardo high-speed track. Result? At 200.3mph (though they claim 211), the Brabus Mercedes GLK lays claim to being the fastest street-legal SUV in the world. Keep in mind, it’s not an off roader – but with proper tires, this Frankenstein of Performance should be able to handle snow without issues and still be able to cart around groceries, the kids and their violins, and that stash of Xanax you’ll need to stay calm while behind the wheel doing 200mph on the way home after school.

The current Grand Cherokee (introduced in 2012 and tweaked for 2014) is “the most awarded SUV in history.” Whatever. Just because you won the award for “Best Door Handle” doesn’t mean I’m impressed; I’m impressed because the upcoming Maserati SUV will be built off this platform, with the only major changes being the Ferrari-sourced engine and more upscale interior. Downside: the Grand Cherokee is not trail rated, so don’t go looking for rock climbing adventures. Upside: the legendary 6.4 liter HEMI V-8 pounds out 470 hp and 465 lbs. of torque, making 0-60 runs in the high fours an everyday stoplight drag smile-fest. Oh, and don’t even bother with shoveling your driveway: the SRT with its standard 4×4 capability will blast through snow with ease. Though it’s the most expensive Jeep in history – performance-wise, this SUV will still easily run with its 6-figure priced competitors.

The Cayenne is Porsche’s best-selling vehicle and – much to the dismay of Porsche fanatics globally – has played a huge role in the survival, growth and expansion of the brand. The Cayenne can be had in many flavors, from spicy to red hot; and to satisfy the needs of the more “practical” among us, diesel and hybrid options are available. For our purposes here, the ultimate Cayenne is the twin turbo S model, with 550 HP at your disposal. It’s also quite a capable off road vehicle, combining luxury and performance in one great package. Just bring your checkbook, as this is a pricey piece with most going out the door between $170-180k.

American Track Truck – Anything can be an SUV

Have an older SUV, and you want to make it into the ultimate snow warrior? Check out my new favorite thing: the American Track Truck Dominator, a track conversion for just about any SUV. If you’re yearning for Yukon adventures but don’t think your Tahoe is up to the task – this might be for you. Just about everything in the ½ ton series from S-10s to RAV4s to Suzuki Samurais (seriously) can fit the Track Truck’s Dominator system – and once they’re on, pick your pleasure: ski or snowmobile trail grooming, farm or camp access, ski hill maintenance, ice fishing, winter exploring, even search and rescue. The tracks install in under an hour with no vehicle mods, no specialized parts and come off just as easily.

Read More
Cigar Buying Guides
Classics are classics - but if you're ready to try on some smokes from the boutique side of the cigar world, your time has arrived! Here are 10 top picks for Beginners' Boutique cigars - easy to enjoy, not too hard on the wallet, and easy to fall in love with. We've even added a few bonus picks you'll like - read now!
Read More