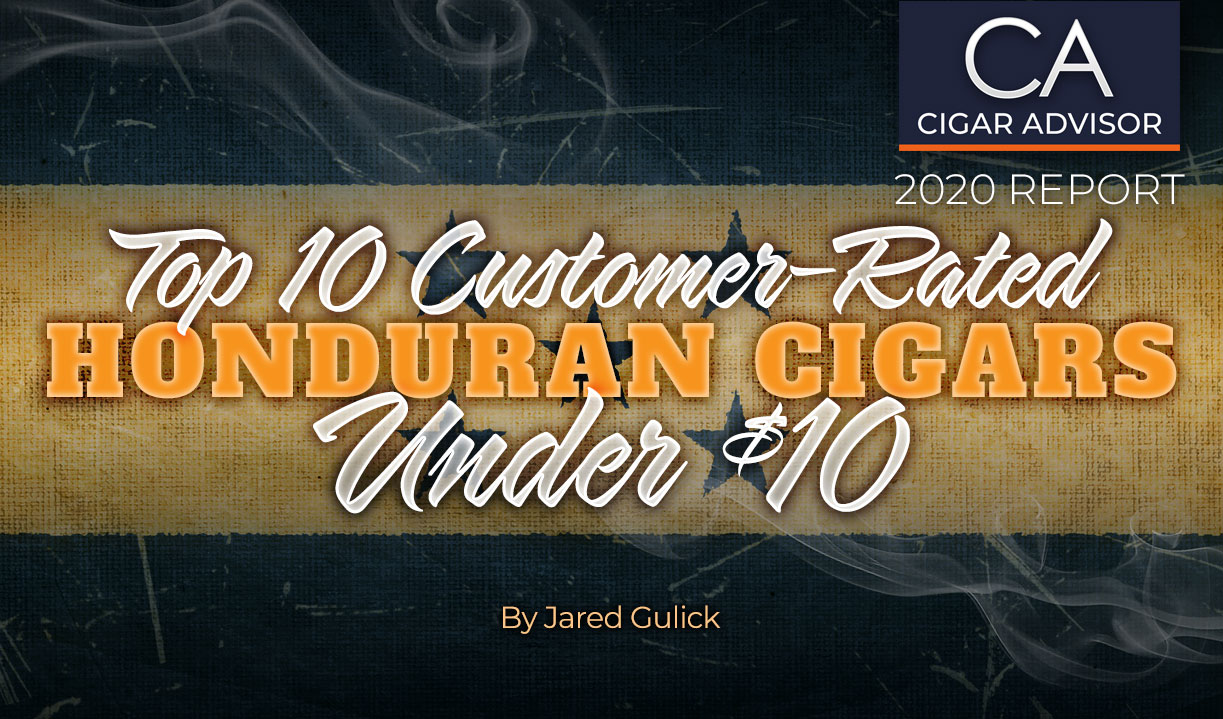 Twenty years ago, there were clear lines drawn between cigars from their respective countries. Dominicans were mellow, Nicaraguans were strong – it was what it was. Honduran cigars tended to be robust and spicy, but still sat in between. At the time, manufacturers kept it simple and tended to source tobaccos from home rather than abroad.

Honduras rose to cigar-making prominence because Cuban exiles found the country’s soils to be ideal for growing tobacco, as some areas are very similar to Cuba’s Pinar del Rio region. The El Paraiso province is the nation’s “cigar capitol” – Danli (home to HATSA) and the Jamastran Valley house most factories and tobacco fields.

Honduran cigars – just by virtue of the name – incline us to think of Baccarat, Punch, Camacho, Hoyo de Monterrey. Famous Honduran factories abound, including El Paraiso, Plasencia and Raices Cubanas, as well as those from back in the day like Villazon. As years went on, they experimented with their blends to include leaves from outside countries.

Of course, that creates a distinction among Honduran cigars today…the line has been blurred between those that are rolled with some (or all) Honduran tobacco, and those that are simply manufactured in a Honduran factory.

For the purposes of this CA Report, we’re focused on the latter. (Old-school country/tobacco puros just aren’t as commonplace anymore). In addition, each cigar had to receive a minimum score of 4.5 stars, globally, by at least 10 reviewers of Famous Smoke Shop.

It’s worth noting that a lot has changed since this article was first published five years ago. The cigar industry is kind of like an evolving ecosystem; just because big-name cigars like Alec Bradley Prensado or Camacho Corojo aren’t on this list, doesn’t mean they’ve fallen out of favor…it just means there are more players on the field to compete with. Smokers are trying new cigars, and rediscovering lost classics – and rating them. So we’ve rerun the numbers, and selected 10 fresh Honduran-made cigars and given you their scores, so you can see how today’s cigar smokers feel about them.

Be sure to check out our 10-under $10 guides to the top customer-rated cigars from the Dominican and Nicaragua, too.

Some think that high ratings require complexity and full flavor. Baccarat realized long ago that you can win just as many hearts and minds with a consistently mellow, Connecticut Shade-wrapped cigar. Because of this, the blend produces creamy notes of cedar, toast, and earth – all underscored by gentle spices. There’s a reason these things are best sellers. If you’ve somehow missed this mellow staple smoke, maybe it’s time to turn around for another look.

Punch is arguably the manufacturer that put Honduras on the map. And with a penchant for…well…Punch-y recipes, they’ve always lived up to their name. This Maduro certainly does, too. Wrapped in a dark Connecticut Broadleaf wrapper, the cigar exhales a dense, chewy smoke full of earth, coffee, and sweetness.  Why not end your day on a high note with a stiff drink and a smoke that can keep up? This is one Punch in the mouth we’d welcome any time, and we think you would, too.

Rocky was among the first of the boom-era manufacturers to craft bolder cigars. Simply put, he saw that the industry was evolving, and he was willing to evolve with it. The Edge Corojo is a prime example. Hints of caramel, cocoa, and a dash of sweet peppers emanate from its Corojo wrapper and Ligero-laden core. The blend is potent, yet controlled, and approachable enough for those who want a thrill ride without having to sign a waiver.

Stealth jets make up for their lack of visibility with precise execution, and when the dust settles, their aftermath is unmistakable. The same is true with Gran Habano #5 Corojo. In similar contrast to the cigar’s lack of headlines, the customer reviews paint a clear message: “smoke me.” 5’s flavors are dark, spicy, and rich, and they always outperform its price tag. You could follow the masses, but sometimes the paths least travelled end with the best rewards.

With everyone celebrating the return of the Roaring 20s, a little art deco vibe via La Gloria Cubana Gilded Age fits nicely. Don’t mistake that all flashy packaging for a gimmick, though. Its Sumatra Leaf (the same one found on the Serie R and N) underwent lengthy fermentation and aging. And the result? A savory, full-throttle smoke brimming with nuts, spices, and a hint of citrus zest. The cigars may draw inspiration from a prosperous time of American history, but you won’t need a fat stack to get your hands on one.

If it works, you don’t question it, because Saint Luis Rey Serie G Maduro brings the bacon with five stars across the board. The cigars are loved for a simple formula: great flavor at a great price. You’ll be greeted by wisps of baking chocolate and sweet espresso from not one, but two Connecticut Broadleaf Maduro leaves. If dark cigars are your forte, it might be time to get on the Serie G train and smoke what you’ve been missing.

Alec Bradley Sun Grown is a veritable world tour of cigar flavor. With leaves from Nicaragua, Honduras, Colombia, and Brazil, the blend bevies a bold medley of complex flavors. Floral, zest, sweetness, and dark fruit – to name a few. While AB is more known for brands like Prensado and Black Market, Sun Grown keeps the love alive just the same…and is only available at Famous.

Sancho Panza (the U.S. version) has its roots in the pre-boom, way back in 1981. For those of you who remember the originals, oh, what gems they were! Though time hasn’t been friendly to many of the heritage brands still around today, much of what made Sancho Panza special remains today. The Double Maduro is extra dark, with the Maduro treatment given to both its wrapper and binder. It’s creamy, earthy, and uncharacteristically consistent at its price point. If you’re looking for where old-school and new school meet, make some room in your humidor for these.

Churchills don’t often make our lists, but one worthy exception is Hoyo de Monterrey Excalibur. The only explanation I can muster: cigar enthusiasts want as much of it as they can get. For the better part of 30 years, Excalibur has been a reliable workhorse, and it still smokes the same today as it did back then. Medium-bodied with leather, cream, cedar, and spice, few cigars balance price and flavor as well. We think you’ll love it regardless of your level of experience.

For the finale, there’s Romeo y Julieta Reserve. The quintessential Honduran cigar. As far as brands go, RyJ is among the most successful, and of their cigars, Romeo Reserve is the benchmark. Its flavor is toasty, nutty, and fruity, with a bit of zip around the edges. It’s great for beginners, but ideal for smokers bridging the gap beyond mellow. The blend is like that old pair of shoes you’ll never throw out. Classic, comfortable, and always better with age.

What are your go-to Honduran cigars? Let us know in the comments below!

Clear, concise, and quick. I particularly like the averaging of reviews which I consider a truer indication of the cigar’s quality. I shall have to update my list of sticks to try.

Mark, so glad this was helpful. Let us know what you think when you try them!

I would also recommend Padilla Cigars Vintage Reserve, it will blow your mind

Good smokes! Thanks for reading, Alejandro!

Another highly recommended cigar is Eiroa Natural. Christian Eiroa was the owner of Camacho before selling it to Davidoff.

I’ve also heard very positive comments about the Eiroa Dark Natural but have not had the pleasure to try yet. Will let you know when I do

Eiroa Dark is excellent. Christian really knocked it out of the park!

[…] There you will find 54962 more Infos: famous-smoke.com/cigaradvisor/2015-top-rated-honduran-cigars/trackback […]

As a reader from Europe, I can’t belive you called RyJ a Honduran cigar! Or at least still HAVE to call it that. Still, an amazing list.

Thanks for reading! Romeo y Julieta Reserve is a Honduran cigar. That’s where the blend is made and what qualifies it as such.

The original RyJ company itself is based out of the Dominican Republic and has been since the revolution forced the original owners to flee Cuba.

Reading Time: 3 minutes Before you bust out the chips, beer, and meat tray, have a look at four more top new cigars that are sure to take your Big Game party to the next level. View the list now!