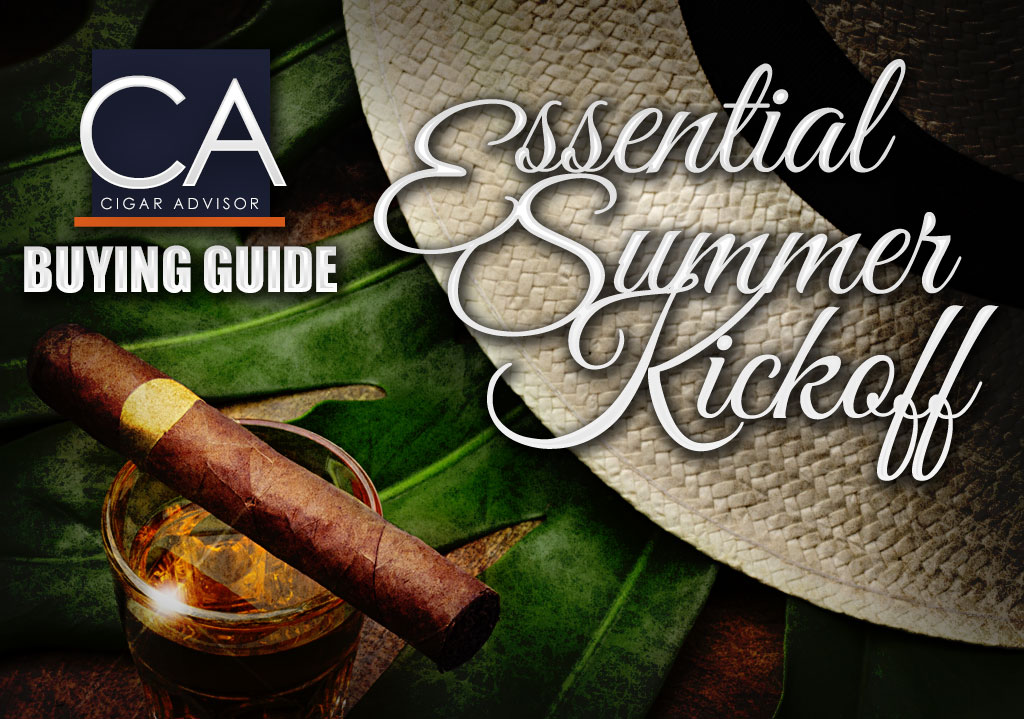 Up in Smoke: The Essential New Cigar Summer Buying Guide

by the Cigar Advisor Editorial Staff

While you’ve been busy packing up the sunscreen and eyeing those oh-so-tempting timeshares in Boca Raton, we’ve been racking our brains to come up with a comprehensive list of the most recently released cigars to hit cigar shop shelves. And there were many – we had over 200 to choose from (thanks, FDA Deeming Rule deadlines)…which made it extra hard to boil it down to a short list of the latest and greatest that we think will be the perfect smokes to kick off your summer. The ones that got left out? No worries, we’ll tell you more about them in the coming months. But we’ve rounded up the troops, and put together this recommendation/buying guide of 12 new cigars that are guaranteed to spice up those poolside rendezvous.

This year’s IPCPR is still a ways off; so we’re not sure what new cigars we’ll see in the latter half of 2017. We sure saw new action in cigar regulations, both positive and negative for the industry. But because Cigar Season is just getting started, we’ve tried to captured 2017’s hottest cigars (so far) that are sure to burn up the scene.

So – whether you’re hitting the water for your next big fishing trip, heading to your cabin in the woods, a beachside retreat or just planning to be at the pool all summer – our new cigar buying guide has you covered.

The Cohiba Cigars brand continues its expansion into more complex flavor territory with the new Cohiba Blue selection. Seamlessly handcrafted with specially-selected tobaccos from three countries, the centerpieces of this medium-bodied blend are the Honduran Olancho San Augustin (OSA) wrapper and binder that envelope a core of Honduran Jamastran, Nicaraguan Ometepe and Dominican Piloto Cubano tobaccos. The smoke is velvety smooth, well-balanced and moderately earthy with caramelized flavors of cedar, molasses and a light note of white pepper on the finish. Cohiba Blue cigars will be offered in four popular sizes: Churchill, Toro, Robusto and Rothschild.

Upmann has been one of the busiest brands over the past two years, having added a number of more diverse blends to its stable. For this new Mogul selection the recipe called for long-fillers from the Dominican Republic and Nicaragua, plus Peruvian ligero, all bound in a savory Nicaraguan binder, and finished with a dark, shimmery Connecticut Broadleaf Maduro wrapper. Expect a medium-full smoke brimming with base notes of earth, wood, dark chocolate and sweet spice. Priced affordably, and offered in the most popular sizes, the retro, circa 1960s-designed boxes may remind you of the hit television series, Madmen.

Since Ernesto Perez-Carrillo founded E.P. Carrillo in 2009, his cigars have amassed some of the highest tasting scores, and the Original Rebel selection is no exception. Built on a full-bodied Nicaraguan tobacco core, the “Maverick” sizes have an Ecuadorian Connecticut wrapper, while the “Rebellious” sizes feature a U.S. Connecticut Broadleaf Maduro. Both blends are offered in three shapes designated by their 52, 54 and 56 ring gauges.

Maverick offers notes of earth, spice, roasted nuts and sweet tobacco, making for a smooth, well-balanced smoke that pairs well with coffee. Rebellious starts with an earthy-peppery kick, then rounds-out to flavors of cedar and roasted coffee with a subtle note of sweet tobacco and nip of peppery spice on the finish, making for a satisfying after work or dinner smoke. Both cigars are reasonably priced and presented in boxes of 10 cigars.

Well, Rocky Patel’s ex-bus driver is making some killer cigars and the new 2012 line is one hell of an excellent offering. The Connecticut and Maduro are terrific but the Corojo will appeal to a broad base of cigar lovers with its medium body profile. Very toasty and creamy notes of roasted nuts and graham cracker fill your palate with the tobacco goodness you deserve.

Yes, it’s the same blend as the original, but now beautifully pressed giving it great hand feel and a nice looking smoothness. What I love about this stick is that they took a bold Honduran Camacho blend then wrapped it in a silky Ecuadorean Connecticut shade leaf that tones it down and smooths out its profile so nicely. Very nutty and toasty, and smokes well any time of the day.

Everyone knows that Steve Saka blends great cigars and surprise, surprise, the Mi Querida is no shocker… it is a massive Nicaraguan flavor bomb! Very full-bodied and wonderfully rich in full-flavor, it’s not a smoke for beginners but rather a treat for the experienced, aged tobacco palate. With notes of espresso, dark cherry and roasted nuts, it’s a cigar you’ll want to finish off a great meal with and to cap off another day well lived.

If the days are longer, maybe your cigar should be, too. Check out this meagerly-priced Cuban Rounds Churchill measuring a solid 7 inches (that’s about 2 hours!). The Cuban-sandwich mix of 100% Nicaraguan tobaccos smokes with a pleasant medium body that won’t leave you sweating in the sun. With all that high-octane leaf, the folks at Ventura Cigars have coaxed some lip-smackingly rich flavors of wood, spice, sweet earth, and a nip of pepper. Some even say Cuban Rounds remind them of that familiar Havana taste. We’ll let you decide that for yourself, but at this price…they’ve got daily smoker written all over them.

While summer days can be scorching hot, I’ll be staying nice and cool, sitting poolside with a Vindicator Chimera (preferably Churchill) and a strong gin & tonic. A Famous exclusive, this cigar is chock full of flavor with a combination of Mexican Sumatra for a wrapper, a Criollo 98 binder, and a sweet blend of Honduran, Mexican, and Nicaraguan filler. The Chimera is one smooth smoke, robust in flavor yet not overpowering. I’ll take this Chimera any day of the week.

Smoking Joya de Nicaragua has always been accompanied by the old adage, “you mess with the bull, you get the horns, too.” While they can lay claim to the original power smoke, Joya Black is a (relatively) new cigar that keeps all of that complex Nicaraguan flavor – but trades strength for smooth, dialing in on a tasty puro recipe that’s finished in a sweet Mexican San Andres Negro wrapper. I’m not sure which is more impressive, really: the deep and dark flavors, or that this almost-anytime Joya is affordable enough to smoke on repeat all summer long.

When we reviewed this cigar a couple weeks ago, I braced myself for full-bodied impact…so imagine my pleasant surprise when I felt this new cigar from AJ Fernandez develop into an easier, more medium-bodied cigar. Shadow King releases a flash flood of pepper to start, and the three-nation blend of long fillers are certainly bold enough to stand up to any cocktail. Not content to leave well enough alone, though, AJ added a little zest to the blend by utilizing an Oscuro Sumatra wrapper. The smoke is thick, and the tanginess is evident. Fans of Nicaraguan cigars: if you’re feeling froggy and want to jump, this here’s your new summer smoke.

Casa Magna Domus Magnus II is the big cheese of the Quesada lineup. I’m cheating here – this Casa Magna is not necessarily new, but it IS new to us – and this masterwork has flown under the radar for long enough. And what a finely woven tapestry it is: inside is a big dose of all-Nicaraguan tobaccos that smoke complex and FULL – matter of fact, it’s the only cigar that got me weak in the knees in quite a while. On top is a Jalapa Sun Grown wrapper so silky smooth it belongs in the permanent collection at the MFA; combined, the Domus Magnus is sure to keep your taste buds occupied down to the nub. This is the PERFECT fire pit smoke.