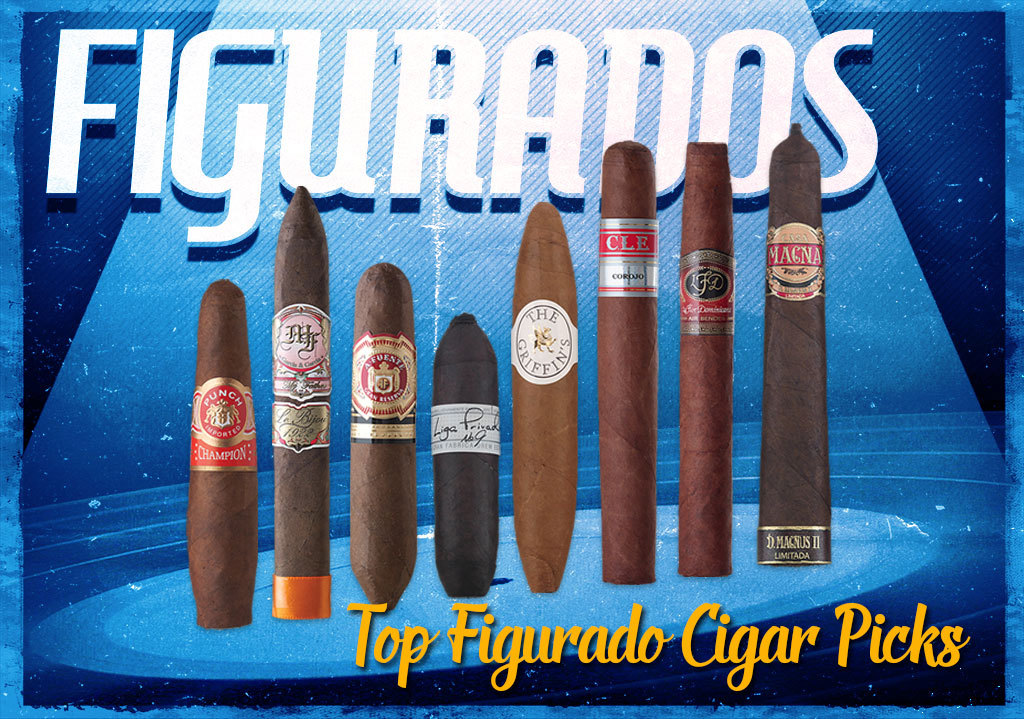 If I asked you to name six cigar shapes, what would they be? Robusto…Churchill…corona…what else?

If you answered torpedo, you’re onto what we’re doing here. The torpedo – like the classic shape of the Montecristo Pilotico Pepe Mendez No. 2 – is technically a figurado cigar, and I’ll bet you didn’t have any besides that on your list. Of the two main cigar groups – parejos and figurados – the “shaped” cigars (or figurado) have become more of an aficionado’s special occasion pick than an everyday smoke.

The figurado cigar (especially the perfecto) was intensely popular during the golden age of cigar smoking, around the late 1800s, and easily outpaced parejos in demand well into the 20th century. Not so much, anymore: Robustos are now the most common size. Fortunately, many cigars still come in at least a torpedo form, and there are some guys who still go all out with exotic figurado selections that are a solid throwback to the glory days of the old Clear Havanas. That’s because the figurado cigar is a thing of tradition.

What is a figurado cigar?

Basically, any cigar that isn’t a parejo is a figurado; toros, robustos, Churchills and the like are all parejos, featuring straight sides and a round head. Figurados feature a tapered (or even pointed) head: the sides of the cigar will still be straight, or might flare out at the foot, or bulge in the middle. A Pyramid (sometimes spelled Piramide) flares from the shoulder to the foot, like a cone; the perfecto bulges in the middle, and is tapered at both ends. A lot of times, you’ll see the names end up being used interchangeably – you’ll also see Belicosos, Salomons, Trompetas…the list goes on. A lot of times, cigar makers will come up with their own unique names for their specially-shaped cigars. But in the end, these guys make a figurado cigar for flavor.

What a figurado cigar means for flavor

I heard someone describe smoking a figurado as “a journey of flavors” because of the ring size variations between the start and the finish. In the case of the torpedo and belicoso, drawing smoke through the tapered head results in you tasting it more intensely, in a more concentrated way, on the taste buds. It’s “focused.” For pyramids and perfectos, the ring gauge widens and narrows – making for a cigar that smokes with varying amounts of intensity and coolness at different times. It’s also a chance for you to taste more of the wrapper’s flavors when the cigar is at its thinner parts, as the cigar delivers more body, strength and intensity.

Sometimes you’ll see the size of a figurado written with a slash in the ring size – like the Diamond Crown No. 6, which has a 46/64RG. That means the thinnest part near the head has a more petite 46 ring gauge, and the widest part (in this case, near the foot) is a beefy 64.

These days, any of the figurado shapes are considered a specialty smoke. They’re a luxury; they’re also very hard to roll, meaning the best-trained torcedores in the factory are the ones who create them. And that, of course, means a figurado cigar runs a little more expensive than your run-of-the-mill robusto. But they’re so worth it – and if it’s time to treat yourself, here are 10 figurados well worth the splurge…

Drawing inspiration from the larger (and wildly popular) Drew Estate Feral Flying Pig, this Flying Pig has pretty much become THE standard bearer among the figurado cigar choices out there. This is the savory No. 9 blend in a short, fat and pigtailed 60-ring format that booms with full, sweet flavor.

Tradition is at work here, and the Griffin’s gets it: fine Dominican-raised Cuban seed long fillers under genuine Connecticut shade, in a classic shape that smokes with smooth and nutty character. A luxury cigar indeed, and without the bloated price tag slapped on other specialty smokes.

Christian Eiroa’s figurado cigar defies the convention I told you about before, as the 11/18 does not refer to this cigar’s size – it’s to honor his mother’s birthday. Brimming with that classic Eiroa Corojo bite, this curvy toro (note the bump below the band) is created using a factory mold Christian had made specifically to form this cigar.

If we’re going to feature a belicoso, might as well use a top shelf example. Padron’s 1926 No. 2 features a superb box pressing of its robust Nicaraguan tobaccos; the head tapers gently into that classic almost-torpedo shape, topped off with a formed cap. Highly rated, and hard to beat.

The 97-rated Air Bender is known for super-full body, packed with creamy spice; the Chisel also happens to be more of a “new breed” in the figurado cigar world, where the normally rounded head is tapered on only two sides. This really focuses the Ligero’s flavor. Pro tip: instead of using a cutter, you can gently pinch the sides of the Chisel’s head to open the draw.

The classic. Already a well-regarded Honduran smoke, the flavors get a boost of complexity in this almost-perfecto Punch by the wild RG-size swing from about 40 to 60 to 30. Remember, a figurado is about flavor – and with the Ecuador Sumatra wrapper, there is no shortage of it. A hearty and well-regarded cigar.

Like I said, some cigar makers create their own names. Here, it’s “tip of the spear.” Alec Bradley’s all-figurado cigar line (5 sizes in all) draws its name from the more Salomon-ish shape, made with Honduran and Nicaraguan tobaccos that smoke medium in body, a recipe that took 5 years to perfect before being shot into space. Seriously.

My Father’s exceptional example of the torpedo shape, and the expertly-formed head that tapers to a sharper point than a belicoso (that’s the biggest difference between the two shapes). A Nicaraguan puro that showcases full body and flavor, and how the cigar’s shape can influence both.

Manuel Quesada gets to the heart of tradition and his Cuban heritage with this extremely complex blend of Nicaraguan tobaccos, rolled in a gorgeous trompeta (“trumpet”) shape. Evolving from a 46 to a 64 ring gauge, the flare from head to foot is very evident; so is the power of this cigar, going from full to super-full. Don’t say I didn’t warn you…

Hamlet Parades came to the U.S. in 2015, and become Rocky’s blender of record; he brought with him a wealth of cigar rolling experience, having spent a number of years at the old RyJ and Partagas factories in Cuba. A true master-crafted Salomon, this Hamlet smokes with dark and peppery flavors, laced with sweetness from the San Andres wrapper.

Probably the most popular figurado cigar on the market today, and whose virtues we’ve preached to you time and again. The Hemingway speaks for itself.

Looking for some other figurado cigar options? Try these:

Perdomo cigars offers probably the widest array of the more unique selections of cigar shapes out there – we could almost do an article just on Nick’s figurados.  Among the must-haves are the Edicion de Silvio and Double Aged Salomons, along with the uniquely-formed Perdomo Champagne Noir figurado. For a grade A example of a classic, sharply pointed torpedo, any of the Perdomos will deliver.

Oliva Serie G Maduro perfecto is a popular (and highly rated) smoke, so is their Special G. There are some great AVO piramides; Rocky Patel offers a perfecto size in both the Vintage 1990 and the Vintage 1992 lines, and each of his Lucullan cigar blends has a beautifully made torpedo.

Want more Quesada? Try the Q D’etat Molotov (a fantail-capped figurado cigar) or the Draga (another Salomon), above. La Aurora has a slew of perfecto options – if you like Brazilian Maduro as much as I do, look for the Preferidos Ruby #2. Kristoff GC Signature Series and the Kristoff Ligero Criollo Torpedoes are potently delicious; if you prefer a belicoso, find your way to the rich, Sumatra-wrapped La Gloria Serie R.

As you can see, there’s no shortage of figurados available in the humidor – and with so many to choose, you just may have to seize the opportunity and enjoy these “special occasion” smokes a little more often.

Got a favorite figurado? Tell us what it is in the comments below…

Reading Time: 6 minutes Can Robustos and Churchills of the same cigar blend taste different? We sample five popular brands to see how much a cigar’s size affects its taste. Click to see more!