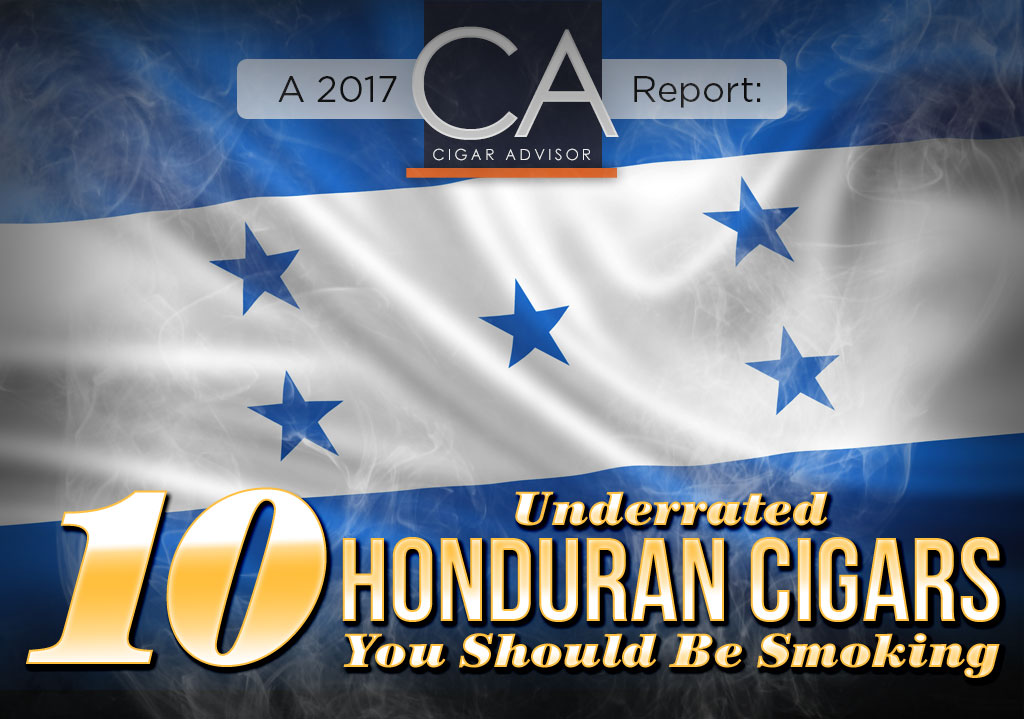 10 Underrated Honduran Cigars You Should Be Smoking

For almost half a century, the Dominican Republic has been the leading exporter of cigar tobacco and producer of premium handrolled cigars, while in recent years, Nicaragua, with its fertile valleys and rich volcanic soil has steadily become the center of the cigar-making world. But what about little ol’ Honduras, which has been home to some of the world’s finest tobacco for almost 300 years?

Colonized by the Spanish during the 16th century, Spain’s explorers went to Honduras in search of gold, yet soon discovered that its rich soil could yield riches by growing tobacco. Moreover, after the Revolution nationalized the tobacco industry in 1959, many of its best tobacco growers fled Cuba to start over in Honduras. Since then, a number of Cuban-seed tobacco varieties have been developed in Honduras, including Corojo, Criollo, and Connecticut seed which, in turn, has sprouted a number of world-renown brands with very distinctive flavor profiles. Honduras may not produce the number of cigars as its Nicaraguan and Dominican neighbors, but what they lack in quantity they make up for in quality.

If you’re an avid cigar smoker, odds are you’ve already had the pleasure of several high-quality Honduran cigars. You may have even developed a particular taste for Honduran tobacco with its bold, earthy, and sweet-spicy character. I know I have. And although there are plenty of highly-rated cigars to choose from, here are 10 underrated Honduran cigars that I feel deserve a little more attention – whether you just happened to miss them, passed them over, or would like to pay them another visit.

The folks at Alec Bradley Cigars are no strangers to Honduran tobacco. Almost all of their cigars are made in Honduras and provide a great example of how well Honduran tobaccos mix with tobaccos from other countries. Take this Alec Bradley 1633 Churchill for example, which employs a blend of Honduran, Nicaraguan and Panamanian tobaccos, binds them in a Costa Rican leaf, and caps them with a smooth-smoking Connecticut wrapper. This cigar offers a mellow, yet very rich-tasting smoke brimming with toasty, sweet and woody notes on a creamy finish. Affordably-priced and excellent as that first cigar of the day, its long length also makes it perfect for enjoying on the golf course.

Here’s one that even I forgot about! The CAO OSA Sol selection stars a shimmery and savory Honduran Olancho San Agustin wrapper from a proprietary vintage 2008 crop, and when combined with the Nicaraguan-Honduran fillers and Connecticut Broadleaf binder, the result is one helluva complex, medium-bodied smoke. Yet, in addition to its earthy undercurrent, along with notes of sweet spices, cedar, and a hint of leather, the redolent aroma alone is outstanding. Presented in boxes of 25 (rare these days), and very reasonably-priced, the CAO OSA Sol Lot 54 stands out among these underrated Honduran cigars as a full-flavored smoke that hits all the right notes. Great for chilling-out over the weekend with your favorite pairing, or any time of day, for that matter.

Camacho built its reputation on making full-bodied cigars with “authentic Corojo” tobaccos grown in Honduras, and over the years have come up with some phenomenal blends like this Camacho Ecuador Toro, one of my personal favorites. A bold Ecuadorian Habano wrapper is just one of the highlights of this complex cigar blended with Honduran and Dominican long-fillers and a Brazilian Mata Fina binder at its core. After an initial pepper shot, the well-balanced smoke is thick, creamy, spicy, and loaded with dark, sweet, and chewy flavors that command your attention from end-to-end. This one makes out underrated Honduran cigars list because it’s often overshadowed by other big hitters in the Camacho cigar lineup – but it’s a must for full-flavored fans.

Christian Luis Eiroa is the name behind the C.L.E. Cigars initials, and he also happens to be one of the top tobacco growers in Honduras. You know that “authentic Corojo” I noted for the Camacho Ecuador above? Those tobaccos came from his family’s Rancho Jamastran farm, which is supervised by Christian’s father, Julio. This CLE Plus 2015 Robusto was one of the most impressive surprises for me last year. It’s a puro that’s seamlessly rolled in the Eiroa’s savory Corojo tobaccos, offering a perfectly-balanced, medium-full smoke that’s creamy and semi-sweet, with some nice spicy components and a hint of pepper. Great any time of day with your favorite pairing.

I’ve been a fan of the Don Tomás cigars for years, and this Sun Grown version, introduced in 2007, takes that rich Honduran tobacco flavor to a whole ‘nother level. The Robusto is a puro surrounded by a sun-kissed Jamastran Colorado wrapper. The smoke is full-bodied, yet not overpowering, and offers well-balanced flavors of toasted nuts, cedar, spice and sweet tobacco. It’s also very reasonably-priced, making it as much of a good value as it is enjoyable. Perfect for any occasion, and well worth checking out, since you will very likely find yourself returning to it on numerous occasions.

Among the most intriguing cigars in the list, since these H. Upmann Yargüera cigars are made from a rare Cuban seed varietal that was introduced to Honduran soil in the 1960’s by the Arias family. They found the perfect spot to grow it, too, but the leaves were very delicate, making for low yields. Enter Altadis’s Grupo de Maestros who hybridized it with a Criollo ’98 seed, resulting in a much heartier leaf while maintaining its natural sweetness, and in 2013 it was ready. Rolled in a “Yargüera 13” shade-grown wrapper that caps a core blend of Honduran Criollo ’98, the result is a complex, medium-full puro brimming with caramelized flavors of cinnamon, nutmeg, coffee bean, cocoa, and brown sugar. I found the Robusto to be exquisite. This is one cigar you really want to savor slowly so you don’t miss one iota of flavor.

I’ve sung the praises of this line several times in the past, yet when I bring them up to other cigar smokers, they’re not always aware of them, so I’ll give it another try. Blended with Honduran San Agustin and Dominican Piloto Cubano long-fillers, plus some Nicaraguan Ometepe for body, a Connecticut Habano binder, and a handsome Honduran Jamastran Viso Rosado wrapper, the Epicure is rolled to a Robusto shape, then box-pressed. The smoke is medium-bodied, ultra-creamy and earthy, with notes of sweet cedar, graham cracker and almonds. Ideal for newer cigar smokers and perfect for enjoying in the morning with coffee, or later in the day as a relaxing after-work smoke. Donned with old-style Cuban Hoyo de Monterrey cigar bands, your friends may do a double-take when you take this one out of your case. They’re also priced affordably, which makes these fine, albeit underrated Honduran cigars even more attractive.

Here’s a good one for newer cigar smokers who want to discover the flavor of Honduran tobacco by starting with a milder cigar. The La Fontana DaVinci is a puro rolled to a Churchill format and blended with mellow Honduran long-fillers encased in silky Honduran Connecticut wrappers with a sweetened cap, which was popular with some older Cuban cigars. The long length keeps this cigar running a bit cooler, for the most part, while smoke is creamy and toasty with some woody notes, as well as some natural sweetness from the wrapper. Just as appealing is the friendly price of this cigar, which won’t cut too deeply into your budget, making the La Fontana DaVinci a terrific value.

Once I acquired the taste for Honduran tobacco, I began trying just about every cigar with it, and Saint Luis Rey cigars became regular favorites. The Saint Luis Rey Gen2 contains a heartier blend of Nicaraguan and Honduran long-fillers rolled in a spicy Ecuadorian Sumatra wrapper. This recipe results in a full-bodied smoke that’s loaded with rich, complex flavors, including earth, charred wood, espresso, plus sweet and peppery spice, all rolled into a very relaxing after dinner cigar that pairs well with everything from coffee, to Port, to a long-aged single malt, bourbon, or dark rum. A must for full-flavored fans at a very reasonable price, too.

I don’t hear much from other cigar smokers about Sancho Panza cigars, which is odd, because they happen to be well-made, very tasty and a pretty good value. Maybe it’s a generational thing, but before I digress too far, the Sancho Panza Caballero is a box-pressed Lonsdale format with nice dimensions for getting the most from all of the tobaccos in this blend. The core consists of Nicaraguan, Dominican and Honduran long-fillers with a sweet Connecticut Broadleaf binder, and a darker than usual Connecticut shade-grown wrapper. The smoke is medium-bodied, well-balanced, and reveals a creamy mix of cedar, nutmeg, and sweet spice. If you haven’t had a Sancho Panza, now’s as good a time as any.

Whether it’s these underrated Honduran cigars, or you’re a fan of Honduran cigars in general – add a comment about which ones you enjoy smoking, too.

Amen on the Camacho and Sancho Panza!

I thought the CLE tasted like dried old leaves from my yard.

Definately going to pick up a couple of 5 packs of these. Although, as I was reading the article I kept thinking… I’ll just click on the link at the end to price out the sampler! Just an assumption on my part, but that would have been cool!

Reading Time: 2 minutes You ready for the Rockiest Top New Cigars yet? In this edition of Top New Cigars, Rocky Patel takes the spotlight as we take you on a brief tour of all his new arrivals. Check it out now!