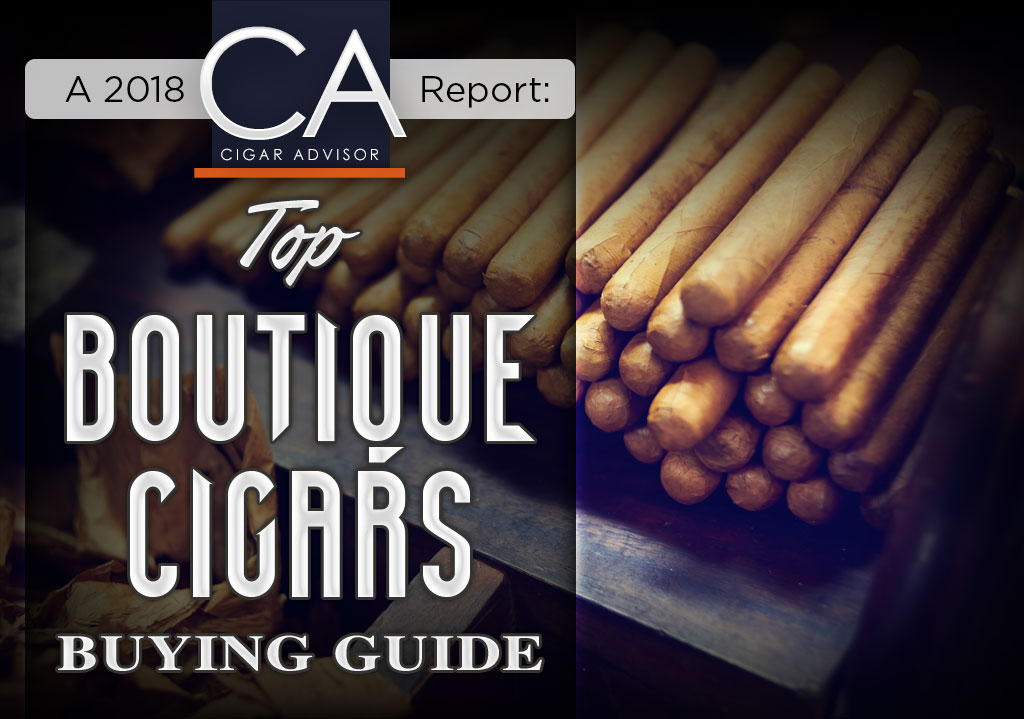 Boutiques for Beginners – The Best Boutique Cigars on the Block

Classics are classics, no matter what – but every now and again, it’s time you let yourself take a walk on the wild side of the boutique cigar world. Admittedly, trying new cigars can be scary: there’s a lofty level of uncertainty when it comes to adding new cigars to your lineup, and when some of the buzz-heavy boutique cigars comes into play – often at a hefty price tag – you want some reassurance. Beginners (meaning those of us who don’t stray much from the humidor staples) can easily get lost in the pro-level recommendations for really rare and hard-to-find boutique cigars…so I’m stepping in to take the reins, and give you ten surefire boutique cigar picks that are a little off the beaten path, and that you’re more than likely to fall in love with. Along with a few extras, just for good measure.

So, what is it that makes a cigar maker or brand a “boutique”? A few years ago, John Pullo broached the subject while sitting down with Rafael Nodal, then-owner of Boutique Blends Cigars. While there are some pretty big grey areas when trying to figure if a smoke fits into a true “boutique cigar” category, the two were able to boil it down to this: “boutique” is relatively interchangeable with “small batch”; the size of the company is also relevant, and market perception is nearly the most important.

Of course, times have changed – new companies have arisen and some would be hard-pressed to say Boutique Blends is still boutique given their recent merger. Brands such as Fratello, Aganorsa, and Leaf by Oscar have seemingly popped out of the ground into overnight successes. On the other hand, brands such as Oliva, Rocky Patel, and Drew Estate have grown from boutique origins to become industry giants. Through the looking glass, the boutique world is ever evolving with many reaching success and spinning off newer, exciting brands. Ready to take a walk on the wild side?

Here’s a boutique cigar brand that comes with both a history and a stellar track record. Founders Jon Huber and Mike Conder hailed from the CAO pedigree before launching Crowned Heads in 2011. Based in Nashville with a strong affinity for music, Headley Grange is their second release: a highly rated, full-bodied smoke that gives a nod to Led Zeppelin’s  former recording and rehearsal location. With a gutsy blend of all Nicaraguan fillers in a gorgeous Ecuadorian Sumatra wrapper, this cigar quickly climbed into our hearts with 90+ ratings and a spot in the Top 25 for 2012.

Another brand with a Drew Estate background, Foundation Cigar was founded by DE’s former EVP of International Operations, Nick Melillo. Highclere Castle is perhaps his most interesting and flavorful cigar to date, though you can’t go wrong with any of them. This premium was blended to re-create the cigars of the early 1900’s, the name itself is taken from the actual castle used for filming Downton Abbey. Melillo blended this ultra-fine cigar with a unique combination of Jalapa and Ometepe-grown Criollo and Corojo, as well as an exclusive hybrid called Nicada’n; the binder is a dark and sweet Brazilian Mata Fina, all capped off with a Shade Grown Connecticut wrapper. Rich, smooth, and creamy – how about that?

The King is Dead by Caldwell Cigar Co.

With some top-shelf partnerships, savvy blending, and old-fashioned elbow grease, Caldwell has quickly climbed to the top rungs of the boutique ladder. Made in the Dominican Republic, King is Dead has a choice blend of all Dominican tobaccos for a full-flavored, full-bodied cigar that boasts a deep milk chocolaty undertone with rich earthy complexity.

Aganorsa launched themselves cigar into stardom overnight as one of the best boutiques for the money. After Guardian of the Farm earned a No. 8 spot on the Top 25 Cigars of 2017, cigar smokers everywhere learned that not only were they making killer tobacco for themselves but also for HVC and Illusione. The Miami Arsenio Oro is a medium-bodied trip made with their signature Corojo leaf in a Cuban-esque profile. Give it a try, you won’t be disappointed.

If you’re looking for a tried and true boutique, Fratello has what the doctor ordered. Fratello Navetta is what founder Omar de Frias calls his “special occasion cigar,” and after 21 successful space missions with NASA we think he knows a thing or two about celebrating. De Frias partnered up with Joya de Nicaragua to create a consistently smooth cigar with rich and earthy Nicaraguan fillers, Dominican binder, and a sumptuous Ecuadorian Oscuro wrapper.

Veteran owned and operated, Southern Draw is a blue-chip boutique brand made out of AJ Fernandez’s operation. While their mellow Rose of Sharon and uber-heavy Jacob’s Ladder get a lot of attention, their Quick Draw line provides a quick, flavor-packed smoke. This Quick Draw Pennsylvania is made using only vintage and aged Nicaraguan and Honduran filler and binders in a sleek PA Maduro wrapper, and best of all – it comes without a boutique price tag.

For the guy who likes some full-bodied bombs, RoMa Craft dives head first into the heavy side of Nicaraguan tobacco with the Whiskey Rebellion. RoMa Craft is yet another burning boutique with a huge following of fans who adore the rustic and primal flavors of these Nicaraguan powerhouses. Intemperance Whiskey Rebellion takes a page from the full-flavored book with big rips of creamy earth, charred wood, peppery spices, and a pleasant floral aroma.

Cornelius & Anthony has a history in tobacco unlike any other boutique. About 150 years ago, Cornelius Bailey set roots in the rich soils of Virginia, growing his operation into S&M brands. Great-great-grandson Anthony has since added these smashing cigars to their portfolio, including the 90 rated Venganza. With a blast of pepper followed by a lingering vanilla bean sweetness and creamy finish, this up-and-comer will knock your socks off.

Crux is a boutique that’s devoted to the craftsmanship of cigar making. The Guild is a medium-full bodied smoke dedicated to the unity and comradery of cigar smoking. Blended to be enjoyed across all levels of experience there’s no shortage of notes like chocolate, cedar, and raisins to go around.

Hailing from Rocky Patel’s neck of the woods, this bonus boutique is decadently rich and handsome in a box-press. Try the Maduro – it’s right up there with the Corojo, which we called one of 2017’s top releases.

Made by Hirochi Robaina, an icon in the Cuban cigar industry, the H.R. Blue is a savory and decadent smoke enhanced by notes of sweet cocoa, barnyard, and mild spice.

You can’t go wrong with any Illusione but if I must pick one, it’s the Epernay. A 90+ rating lands nearly everywhere it touches, as this complex cigar holds hints of honey, coffee, and floral notes.

Warped is a standout cigar company run by Kyle Gellis, one of the young guns of the industry. La Hacienda is a killer medium-bodied smoke with a rich smoking experience.

Very insightful and dead on balls article. Familiar with all the brands except crux. As much as i despise this publication, much respect has to be given to the writer. Wish him great success but with a more reputable magazine.

5 Cigars That Made My Career: Rick Rodriguez of CAO Cigars