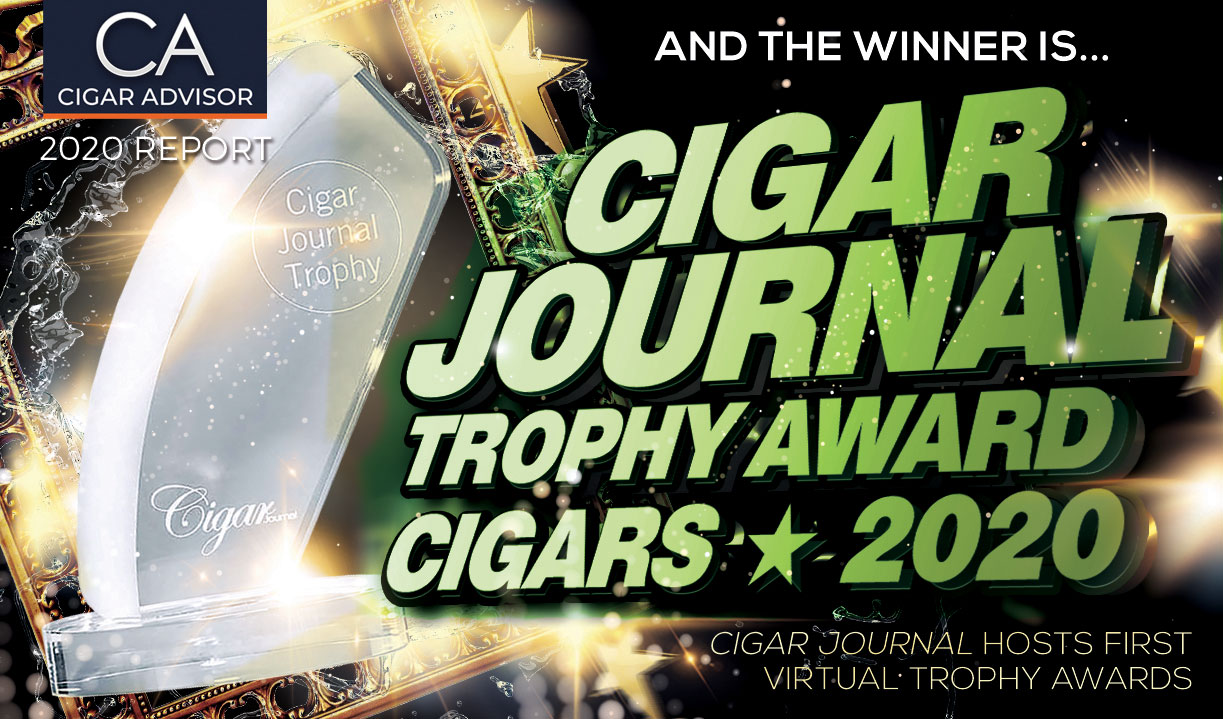 And the Winner Is. . .The 2020 Cigar Journal Trophy Award Cigars

The 2020 Cigar Trophy Awards marks the 20th year Cigar Journal has honored excellence in premium cigar making and other cigar-related categories. However, as a result of the Covid-19 pandemic and travel restrictions, this year’s Awards ceremony took place virtually on September 18, 2020 via ZOOM.

Between June 3rd and June 14th, 2020, cigar lovers worldwide nominated thousands of cigars from the leading cigar-making countries. Other categories included best cigar accessories and cigar lounges. What also makes the Cigar Trophy awards unique is they are the only awards in the cigar industry that are determined by cigar consumers.

After the nominations were voted on between June 22 to July 3, the five most frequently mentioned products and lounges made it onto the shortlist. 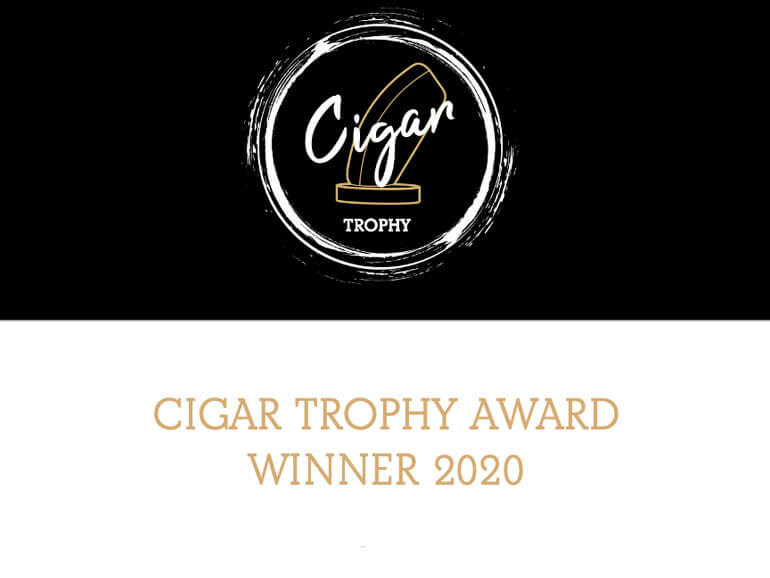 “Around 150,000 votes were submitted. . .and it became clear that products with a large community in the social media networks could rely on the support of their fans,” said, Reinhold C. Widmayer of Cigar Journal magazine.

As always, the manufacturers and brand owners, a virtual Who’s Who of the cigar industry, participated live. There was some pretty stiff competition this year, too.

Since Arturo Fuente Cigars won Best Brand DR last year, I’m not all that surprised the Don Carlos selection took the 2020 Trophy. I’ve been yakking about this brand for years as my favorite of all the Fuente brands for its impeccable construction, long-aged tobaccos, and consistently rich, complex flavor profiles. It’s a goldilocks line for me, too, in that, the blends have more body and strength than the main line Arturo Fuente cigars, yet are not as bold, spicy, or as hard to get as Fuente Fuente Opus X cigars. They’re just uber-creamy, intensely flavorful, and delightfully aromatic. Nice size selection, too.

Davidoff calls their Gran Cru line, “the last word in sophistication.”  Every component is stellar starting with wrappers that are so silky you’d swear they were made of real silk. This medium-bodied cigar is beautifully layered, too. Notes of creamy sweetness, oak, nuts, earthiness, and a peppery finish are enhanced by an almost mesmerizing aroma. And because the Grand Cru line is allied with the fine wines Zino Davidoff admired, you might want to opt for a Pinot Noir or a tangy Chardonnay. When it comes to the ultimate in cigar refinement, the Davidoff Grand Cru Toro is a winner.

One thing you can say for La Aurora, their main line cigars have always been reasonably priced. Take the La Aurora Cameroon 1903 selection for example. (Have you ever noticed that La Aurora seems to have a lot of cigar lines named for years?) Rolled in prime select African Cameroon wrappers, this line is a real standout in both flavor and price. The core tobaccos offer a well-balanced recipe of Dominican and Nicaraguan longfillers bound in an Ecuadorian leaf. The smoke is medium-bodied with a mostly sweet-spicy character complemented by nutty and woody accents. Offered in several popular sizes, the La Aurora 1903 Cameroons are good cigars for beginners, too.

This was a tough category because the finalists were all amazing, including former Camacho owner, Christian Eiroa’s First 20 Years, but Camacho Corojo prevailed. The seed comes from the original Cuban Corojo seeds developed in the 1940s by famed tobacco grower, Diego Rodriguez, who hybridized the imported, native Mesoamerican Criollo strain with Indonesian Sumatra. It took to Cuba’s soil, climate, and—VOILA! Eventually, the seed made it to Honduras and a classic was born. Many say the Camacho Corojo is closest to a Cuban flavor you can get. I say, it’s more like the best Honduran flavor you can get. This line is a must-try for every cigar smoker, and I’ll leave it there.

I wasn’t surprised to learn that the Rocky Patel Number 6 took the Best Cigar prize. I smoked this cigar shortly after it came out and it was really impressive. Its numerical name comes from it being the sixth and best-smoking blend during the blending process. In blending world, that’s almost miraculous. This heavily Honduran-forward blend is practically a puro, but for some savory Nicaraguan leaf. Medium in body, this is a sweet-spicy smoke laden with well-balanced notes of coffee, earth, sweet spice, and a thread of caramel that weaves it all together. The Number 6 Robusto makes a relaxing after dinner treat that’s worthy of its Cigar Journal “93” tasting score.

Introduced in 2007, The Oliva Serie V is a genuine classic that pulled out a win from some really tough competitors like My Father and Padrón. Made in a number of sizes, including the award-winning Oliva Serie V Lancero (above), Oliva Serie V cigars are lauded for their creamy, complex, and full-bodied, yet never overpowering flavor profile. The capa is a tawny Ecuadorian Habano sun-grown that surrounds a core of Jalapa Valley ligeros. Light up and discover a profuse and well-balanced cocktail of earth, wood, nuts, coffee, and pepper underscored by a layer of sweet spices. If you haven’t had the Oliva Serie V experience, now’s as good a time as ever to pick a winner.

Perdomo Cigars is having a great year. On the heels of their Perdomo 10th Anniversary Sun Grown and Maduro releases last month, Perdomo took the Best Nicaraguan Cigar Trophy, beating the awesome Plasencia Alma Fuerte Generación V Salomon. I’ve been a big fan of Perdomo’s sun grown cigars, especially the 20th Anniversary Epicure. The best way to describe the ESV Imperio is, it’s like the 20th Epicure on HGH. It’s got all that smooth and creamy flavor, but Nick’s use of an Estelí core takes the cigar to a bolder mix of sweet tobacco, oak, cedar, and nutmeg to name but a few of the players. It’s a terrific smoke, especially after dinner. Just one piece of advice—savor it slowly.

If you’ve been smoking cigars for a while, odds are you’ve had a few Padrón Classic cigars by now—the line with the “2000,” “3000,” “4000” etc., sizes, among others.  Assuming that’s true, you probably also realized that these somewhat rustic-looking Nicaraguans are remarkably affordable. Even better is they burn great, draw effortlessly, and you get a lot of flavorful smoke for your buck. Mostly medium in body, Padrón cigars reveal notes of earthy spice, cedar, coffee, and cocoa bean, and the maduros offer an extra helping of sweet spices. Somehow Padrón has come up with a recipe that’s universally loved, and it’s not surprising that they’re often at the top of a lot of cigar smokers’ favorite lists.

Now here’s a cigar that’s truly unique in so many respects from the company that also won the 2020 Cigar Trophy for Best Brand/Other Countries. If you call yourself a cigar smoker, you just have to have at least one Toscano. So, why not make it Toscano Antico. In the true Toscano tradition, this dusky, fire-cured blend has a Kentucky wrapper over Italian and Kentucky medium-length fillers. They’re machine-made, and they sell like crazy, too. Starting out with a very pungent, peaty aroma, intense flavors of bitter almond, leather, wood, anise, bitter cocoa, and cloves are just some of the treats at the heart of this unique blend. One review site suggests pairing the Antico with espresso, a sweet Madeira, or Amarone.

The Boveda Humidity Control packs have become a standard in the cigar industry for keeping premium cigars factory fresh. Bovedas are so widely used, it’s no wonder they took the Best Accessory Trophy. I doubt there’s an avid cigar smoker out there who hasn’t used one by now. Bovedas are also lifesavers, especially when your humidor is acting a little out of sorts, but they didn’t stop there. Cigar Advisor has recommended them incalculable times be it for humidity control, seasoning your humidor, and calibrating a hygrometer.

I hope many of your favorites received an award this year. For the complete list of nominations and winners, visit Cigar Journal online.

Reading Time: 6 minutes It takes three to party, and we welcome the arrival of the third in the Siboney Reserve series – a Connecticut – with a Cigar Advisor panel review. Check out our tasting notes and overall impressions of this Famous-exclusive cigar!