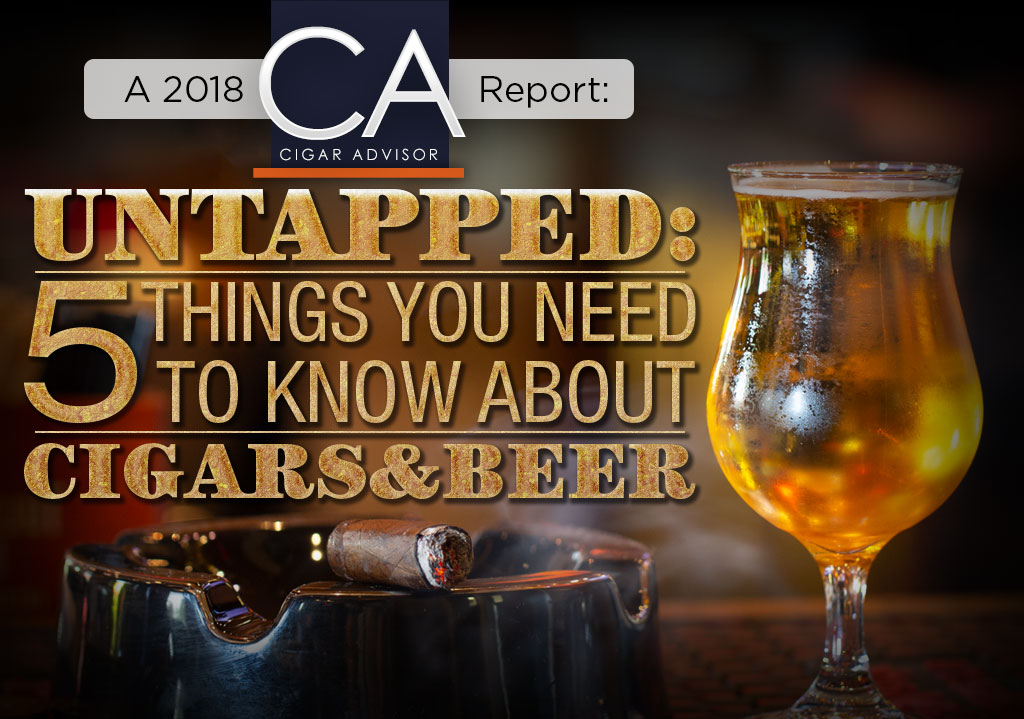 5 Things You Need to Know About… Cigars and Beer

Untapped: 5 Things You Need to Know About Cigars and Beer

“For a quart of Ale is a dish for a king.” ~ William Shakespeare

Between pairing videos and Saturday afternoons on the porch, I’ve certainly made clear to my readers my profound love of beer, namely craft beer. There’s nothing like the refined and sometimes exotic flavors of a premium craft beer combined with complex or even simple notes from a premium cigar. Sure, we’ve talked from dawn till dusk about how much cigars have in common with wine, but what do they have in common with beer?

To satisfy my thirst for beer knowledge, I reached out to Free Will Brewing Company. Between numerous emails and calls, I got the full, untapped dish on what our hoppy friends have in common with our beloved cigars. Between Owner Dominic Capece, and Master Brewer John Stemler, we fleshed out some of the juiciest details about beer with everything from growing to production and aging in our scope. Check it out!

The ingredients in cigars and beer grow in both regions near and far…Tobacco thrives in nearly all parts of the world, but the best places tend to be the exotic locales such as the Dominican Republic, Cuba, and Nicaragua to name a few. However, a lesser but still important quantity of our coveted leaf can be found in the tamer grounds of the Windsor Valley in Connecticut and the sprawling countryside of Amish country in Pennsylvania.

The same can be said for hops, says Dominic, owner of Free Will Brewing. “Most all domestic hops are grown in the Pacific North West”, namely Washington’s Yakima Valley but “European Countries, New Zealand and Australia also grow significant amounts.” Similar to tobacco, “Hops will grow in most any moderate climates but do best in USDA hardiness zones 5-9 with loamy, well-drained soil.”

To make good beer and good cigars, it takes time…Anyone who’s drank a 25-year-old Scotch will vouch that the best things in life take time. It’s often touted in the cigar industry that from seed to ash, over 200 hands will touch a cigar, which can take several years to bring to your retailers shelves. But what about from seed to tap?

Master Brewer John says, “Some beers, particularly sour beers, can take years to produce from the day they are brewed to being ready for sale. Hop rhizomes, once planted take at least 3 years to produce a usable yield. There are whole industries that support beer production- farmers, maltsters, yeast labs, truckers, equipment manufacturers, packaging producers and more.”

Fermentation is a critically important process when making cigars and beer…I’ve discussed the importance of tobacco fermentation before and our friend Nick Perdomo will be the first to tell you how essential the process is. It draws out the ammonia and harshness from the leaves and brings out the natural sugars to create a smooth, pleasurable smoking experience. For tobacco to properly ferment the temperature, time, and quantity must all be in synch. But how important is fermentation to beer?

“Fermentation is absolutely critical to the outcome of finished beer”, says Dominic, “both due to the production of alcohol and flavor.” Dominic emphasized that, “The time, temperature, quantity and type of yeast all must be in spec throughout the entire fermentation process to produce the intended outcome of any recipe.”

Both beer drinkers and cigar smokers have debates…It’s no surprise that cigar smokers love to chat and partake in polite debates. It only seems fair that beer nerds do the same and over similar topics at that. For example, the raging dispute among many cigar smokers is how much flavor is truly imparted from the wrapper leaf. So, what do beer drinkers debate?

John promptly jumped at the question, “One recent debate would be ‘hazy IPA’s’.” For the unfamiliar, Hazy IPA’s are a tweaked recipe of traditional IPA’s in which the hops are added late to the boiling process to interact with the yeast in a unique way to give them their trademark haze. To elaborate, the debates focus on “Whether the haze contributes to the flavor and aroma of the finished beer.” Like the wrapper leaf debate, it’s a subjective matter. “What’s not up for debate”, says Dominic, “is that hazy IPA’s, with bold hop aroma, soft bitterness and full mouth feel are all the rage now.”

There is a great dispute over home-aging both cigars and beer…Ah, the great home-aging dispute has gone on for years in the cigar circle. While most cigar makers argue their cigars are ready to be smoked right out of the box, many smokers will age them long-term in the hopes they will round-out in flavor. However, not all cigars are suitable for home-aging; only stronger, more full-bodied cigars are suited for the test of time. So, are there beers that are suitable for home-aging and, most importantly, is it worth it?

“Most beers should be consumed quickly”, says Dominic. “Generally, beers with higher alcohol and hop bitterness can hold up to some aging.  Sour beers, such as our award winning Olly, are an exception. Many are of a lower alcohol content with almost no hop bitterness, but their low Ph and the bottle conditioning process helps them hold up for years if stored properly. We release these beers ready to drink but some have ‘peaked’ 2-3 years after their release.   All beer will change with age, if that change is for the better can be a matter of opinion. In any event, the curation of the aging process and anticipation can be as much fun as the drinking/smoking experience.”

There you have it folks, the 5 need-to-know facts about cigars and beer.

About Free Will Brewing Co.:

John Stemler went to school for biology and chemistry at Ursinus College, but ended up running a contracting company while brewing at home as often as possible. Dominic Capece ran a successful paving business and enjoyed working on cars and other motorized vehicles on the weekends as well as some occasional homebrewing. The two, once brewing as a team, started getting noticed by some industry professionals through a local homebrew store association and were encouraged to take it to the next level. The main 18k sq ft facility brews and bottles several brands, with distribution in the Northeast of the United States, as well as Japan. In addition, the 17k sq ft Sour Cellar currently houses over 1500 bbls of sour beer in production, to be shared with an ever-expanding market of sour beer lovers.  The main facility has a taproom that is open 7 days a week and has food trucks like The Stick Pig on the weekends as well as several events per month including a Sour Sunday that draws patrons from far and wide.  An additional retail taproom is located in Peddler’s Village in Lahaska, PA.

To the founders, “Free Will” means many things.  It embodies the brewing style of John in that he enjoys all styles and brewing them.  Nothing seems out of reach when you consider that the boundaries of the brewing industry are only constrained by those of science and the imagination. “Free Will” is also easy to remember and the word “Free” is one of the most powerful words in the English language.

Reading Time: 2 minutes #nowsmoking San Cristobal Quintessence Corona Gorda: a My Father-made Nicaraguan cigar that teems with “a rich-tasting brew of earth, wood, and peppery spices.” Click now for our review, and what you should know about this cigar, delivered in under 60 seconds…