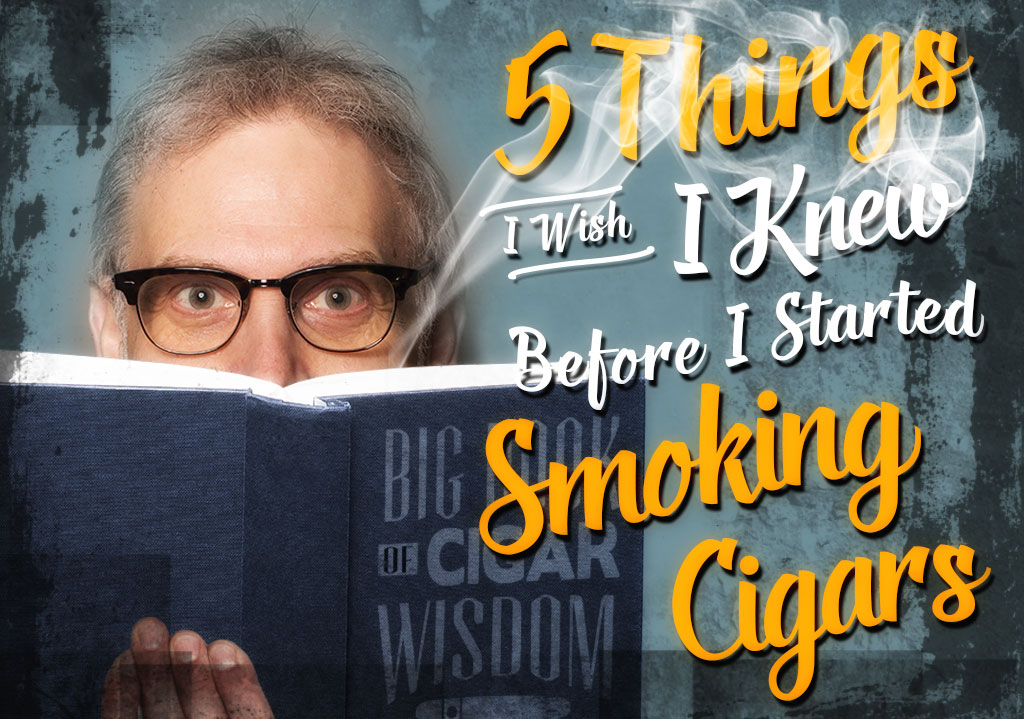 “I wish that I knew what I know now, when I was younger” – goes the refrain to the song, “Ooh La La” by The Faces – and don’t we all? Like when I think about the time I caught the cigar bug. The year was 1981. There were no cigar magazines, no internet, and I didn’t know any cigar smokers. . .

I was working in New York City at the time. One day, on the recommendation of our UPS delivery driver, I set sail for a popular midtown cigar store. I walked into the dank, smoke-filled shop and immediately found myself surrounded by aisles of cigar boxes stacked almost to the rafters with names like Montecruz by Dunhill, Partagas, and Hoyo de Monterrey. These were totally unknown to me, but others like Macanudo, Romeo y Julieta, and Montecristo rang a familiar bell. A clerk appeared and asked if I needed some help. For some reason I was embarrassed to admit I needed it, so he walked away, but boy was I green. Inside, I was desperate. I began scanning the aisles and realized that a lot of these cigars were a little out of reach for my wallet. Instead, I left the store with a couple of budget-priced bundles that were supposed to be “alternatives” to the pricier smokes I spied earlier. They tasted awful. Well, maybe they really weren’t all that bad, but I had no idea what I was smoking, and no frame of reference other than they were supposed to be as good as those pricier cigars, which I knew nothing about either.

My earliest cigar education came not from a cigar store sales clerk or a cigar-smoking friend, but from a little-known, short-lived newsletter called CIGAR. It was published during the early 1980’s by porn king, Al Goldstein, of SCREW magazine fame who had almost as much of a penchant for cigars as he did for sex. Within its pages each month I learned about cutting cigars, lighting, wrapper leaves, humidors – the whole schmear. Al was definitely on to something, but his timing was way-off. Interest in premium imported handmade cigars was still little or nil, so he put the kibosh on the newsletter. Less than 10 years later, Cigar Aficionado magazine premiered, marking the dawn of the 90s Cigar Boom and became the cigar smoker’s bible.

Not much longer after Mr. Goldstein stopped printing CIGAR, I lost interest in the pastime for reasons too mundane to reprise here. Up until that time, I’d been smoking these funky-looking Panatelas made in Brazil that fanned-out at the foot. I can’t even remember the brand now, but I was hooked on them mostly for their aroma, and a box of 25 sold for around $25.

After a long hiatus, the bug got me again, this time for keeps, and I discovered my first genuine premium handmade cigar – a Don Tomás Special Edition Connecticut #400 – a Panatela that I purchased from a well-stocked bar humidor at a local nightclub.

By that time, I was working at a company in New Jersey where one of my coworkers was really into cigars; that’s how I first learned about Arturo Fuente cigars. We talked about cigars constantly and compare notes. We pored through cigar store catalogs like IRS agents and ordered new cigars we wanted to try, occasionally splitting the cost of a box. Sometimes on weekends we’d meet at a local cigar store and buy more cigars. What I was not aware of however, was that we were currently in the midst of the 90s Cigar Boom.

Looking back, and for many years even after I took up the practice, I never imagined that one day I’d be a so-called “cigar expert” dolling-out advice to cigar smokers on, of all places, a cigar advice website; yet, here I am, a professional cigar smoker. So, for the new cigar smokers among you, I thought it would be a good idea to pass on some of the basic things I wish I’d known before I got into cigars.

The first thing you should know is, what makes a premium cigar a “premium.” Cigars with long-leaf filler tobaccos that are made entirely by hand or, “hecho a mano,” are called “premium handmade cigars.”

You’ll find plenty of articles on CigarAdvisor.com covering just about every type of wrapper leaf. But to give you a quick overview, here are the basic wrapper types you’ll run into most often:

Light brown or tan wrappers are generally your “shade grown” variety like Connecticut Shade. These leaves, grown in both the U.S. and Ecuador, receive a very controlled amount of sunlight, and they’re the lightest in body. Yet, when well-cured, fermented, and aged, they produce a sweet taste and an inviting aroma.

Wrappers that are more medium to dark brown in color are generally your Sumatra, Cameroon, Corojo, and Habano, among others. These wrappers also tend to have more flavor, some spiciness, and more body.

Very dark brown wrappers are classified as Maduro. These wrappers are created through a combination of extra sunlight and fermentation at higher temperatures. Maduros tend to be thicker, stronger in flavor, and characteristically sweet. The most popular maduro wrapper is the Connecticut Broadleaf, but there are many more, as you’ll eventually learn.

Keep in mind that not all cigars with Maduro wrappers are stronger. A cigar’s strength comes mostly from what’s inside the cigar, not the wrapper, though it can play a big part in the overall body of a cigar.

There are basically three cigar body types: Mild, medium, and full. These designations have more to do with the fullness of the cigar’s smoke than its advertised strength. When you first start smoking cigars, it’s usually best to start-off with a good quality mild cigar. Over the years, I’ve met several cigar smokers who started-off with some pretty full-bodied smokes like Padrón 1964 Anniversary Maduros, but here’s where I’m coming from: By starting with mild or even mild to medium-bodied cigars, you’ll get a baseline for the flavors and varying strengths to come later as your palate develops over time. Although space prevents me from going into detail on each cigar, below is a list of five excellent mild, medium, and full-bodied cigars to get you started.

Then there’s the question of size, because cigars of varying shapes & sizes taste and smoke quite differently.

First, let’s look at what determines a cigar’s size. When you see a cigar listed as “5½ x 50,” the first number tells you the cigar’s length – simple enough. The second number is the diameter or width of the cigar. This number is based on 1/64th of an inch, or the average thickness of a tobacco leaf.

As for what size cigar is best for starting-out, I would recommend a Lonsdale, whose standard size is 6½ x 42, or 6½-inches with a diameter of about 5/8ths of an inch. The Lonsdale (allegedly, the most popular size in Cuba), offers nice proportions in terms of length, so the cigar will smoke relatively cooler, and the width allows enough tobacco content to get a good amount of flavor from the blend. After you’ve had a few Lonsdales, start trying some other sizes until you find the one that best suits your taste. Over time, you’ll learn that some cigars just taste better in certain sizes.

Once you’re fully committed to smoking premium cigars, you’ll need something in which to store all those cigars you’ve been buying. There are a lot of ways to keep cigars fresh, but the wooden, Spanish cedar-lined humidor is the most traditional of the lot, and my personal choice. Whatever type of storage container you choose, be it a freezer bag, a beer cooler, or a humidor, there are two things that remain constant with regard to storage: Temperature & humidity.

You want to store your cigars out of any direct sun or lamp light at a temperature between 60 and 70 degrees Fahrenheit with a relative humidity of somewhere between 64% and 72%. (70% RH is considered “ideal,” but I prefer 67%.) Conditions will change with the weather, the number of cigars, and the type of container, but if you can keep them in the temp/humidity ranges noted above, your cigars will always be fresh, stable and ready to smoke.

1) A humidifier, preferably a crystal-based model or Boveda packs based on the number of cigars in your collection: 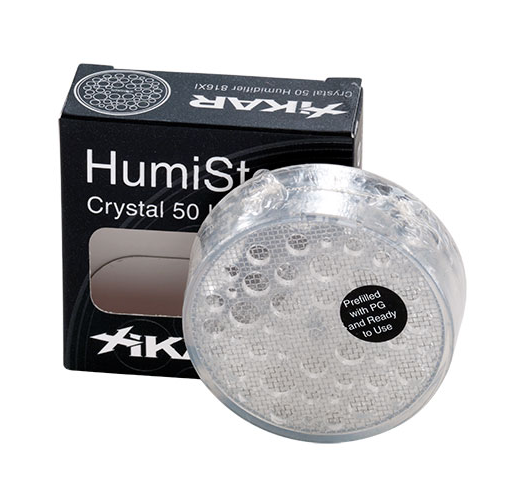 and, 2) a digital hygrometer with a thermometer: 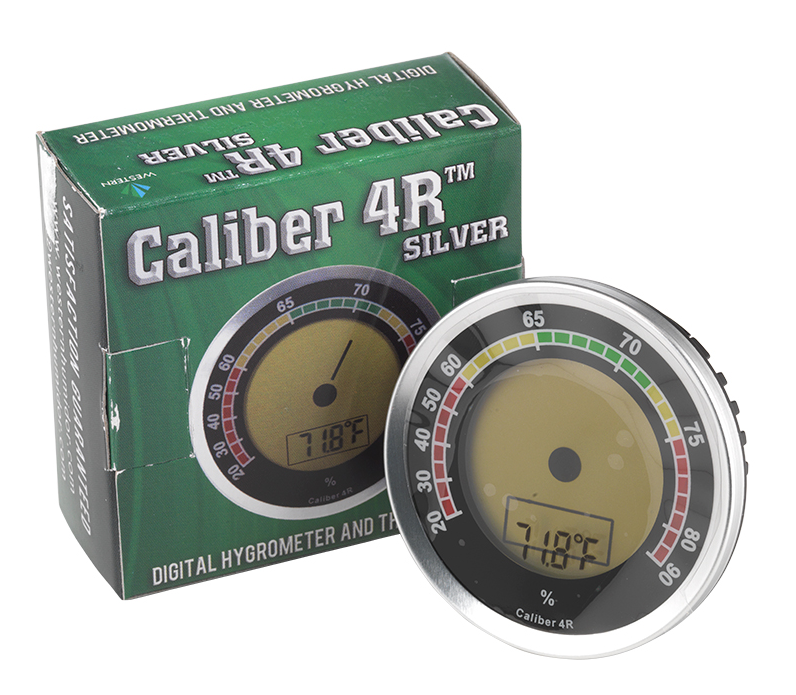 And finally, if you go with a refillable humidifier, never refill it with anything other than steam distilled water or 50/50 polyglycol solution, as recommended by the device’s manufacturer.

So there you have it. You’re now ready to step into the wonderful world of premium handmade cigars with all the info you need to start enjoying them to their fullest. If you found this report helpful or otherwise, please leave a comment, too.

little jimmy here……….north of 71, been smoking stogies for 52 years………….have a small cigar shop (indianapolis)………primarialy a maduro house……the ONLY tobacco we sell is 100% hand rolled cigars
………….appreciate your simple but to the point article………….will show this to my “newer” customers….
……some folks go on for days, speaking about what you just put in a few lines……….i appreciate their excitement but brevity rules……..a good read………..keep up the great work……………on a side note, we prefer distilled water………….go thru about 5 gallons a week…………..

Excellent review for new smokers. As a new smoker I found the Drew Estate varieties very pleasing. Articles on cigar manners also helped me greatly, and surprisingly illustrated that some self proclaimed experts lacked some of the basics. TY for sharing your knowledge.

Great info for the amateur and the expert……Stay smokey

Neither the temperature nor the rh gets that low anywhere in the Caribbean so why keep your cigars so cold and dry?

Carlos: Tobacco beetles and mold have a chance to propogate at higher temps and humidity. Last thing you want to find when you open your humidor. YIKES!!

Thanks for explaining that the first number indicates the length of the cigar. My boyfriend has mentioned that he enjoys the occasional cigar, so I’m thinking about buying him a nice pack for his birthday next month. I will keep these measurements in mind while shopping.

Reading Time: 8 minutes Where in the world is Cameroon – and how do they grow such tasty premium tobacco? It’s Africa, and this spicy-sweet leaf is found on our 10 best Cameroon wrapper cigar picks – including Arturo Fuente, Rocky Patel, Cohiba, ACID, and more. . .