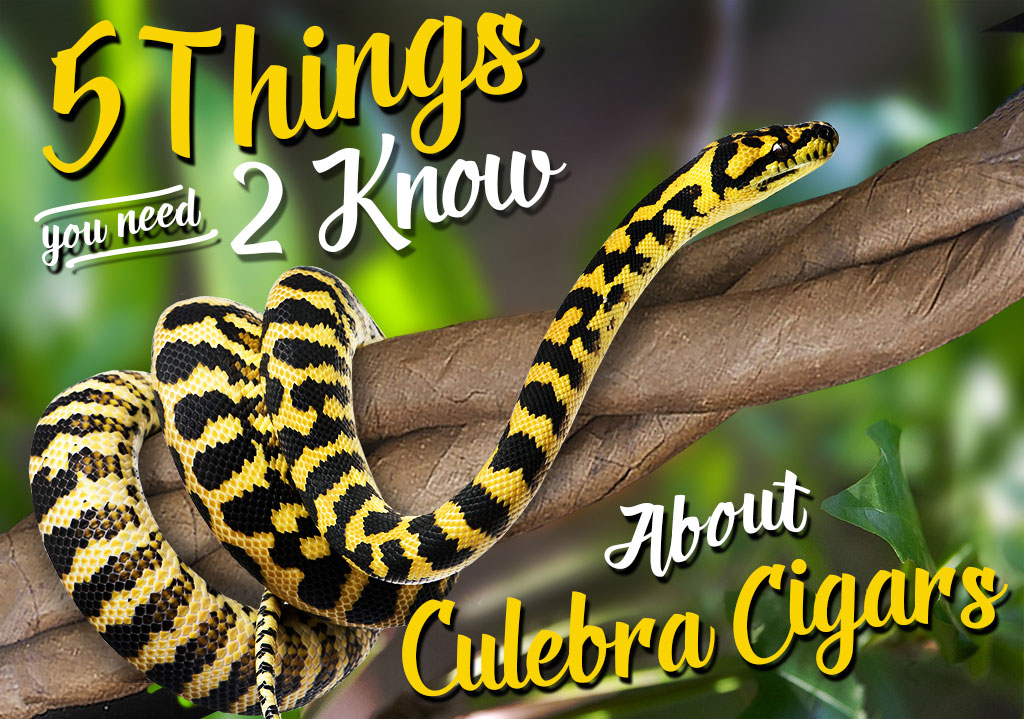 5 Things You Need to Know About… Culebra Cigars

5 Things You Need to Know About… Culebra Cigars

Seven years ago I wrote a short article titled, “Those Crazy Culebras,” about those gnarly-looking cigars entwined in a braid and tied together at each end. The Culebra, which is Spanish for “snake,” hence its snakelike appearance, has never achieved wide popularity, not even in Cuba, but the cigars are still made by some of the better cigar manufacturers, including Davidoff, Drew Estate, Rocky Patel and Hamlet Parades, Villiger, Tatuaje, and the Cuban Partagas brand – so there appears to be a market, albeit a small one, for them. Reasons for their lack of popularity could be any number of things starting with their crooked shape, or their length and ring gauge dimensions, or their more costly price; though with regard to the latter, you are getting three cigars.

Whether you decide to smoke a Culebra cigar at some time in the future or not, here are five things about these novel cigars that, as a cigar enthusiast, may interest you.

Based on the sparse history that’s available on the subject, the Culebra cigar originated in the Philippines during the late-1800s solely as a Philippines cigar industry creation. Culebras soon found their way into U.S. cigar factories, and from 1890 into the 1920s were mainly produced in Ohio and Wisconsin. The F.P. Filbert Cigar Company in Ohio had 3-cigar version made circa 1890 as “Filbert’s Twisters.” Later U.S.-made versions were given names like “Twisted Smoke,” a 4-cigar Culebra made around 1914, and “Cuban Twist,” made during the 1920s.

Although some manufacturers continue to make 3 and 4 cigar Culebras, cigar historians have determined that these screwy-looking vitolas were made primarily as “novelty cigars.”

Another intriguing aspect to the Culebra’s history is the story associated with its true origins; that being, it prevented factory workers from stealing cigars. As the story goes, cigar factories customarily allowed their workers three gratis cigars per day, but since personal consumption was hard for managers to control, some workers either smoked or took more than their share. By giving them three twisted-shaped cigars, factory managers could easily identify any additional cigars the workers had purloined. Moreover, since workers couldn’t sell such odd-looking cigars, there was no black market for them. Although the thievery explanation seems perfectly plausible, there is no reliable historical evidence to back it up.

Thing #3: What Size Cigars are Used for a Culebra?

Whether a Culebra is made with three or four cigars, the cigars used to construct them are Panatelas, generally 6-inches by 38-ring in size, but they can vary more or less. In any event, they must be thin to develop their snake-like appearance. Depending on the manufacturer, the individual Panatelas themselves can be either handrolled or machine rolled cigars.

Thing #4: How Culebra Cigars are Made

In order to make a Culebra, the Panatelas must be slightly underfilled and over-moistened so that they can be braided without breaking or causing the wrapper to crack. First, the cigars are first tied with a ribbon or string about one-half inch below the capped ends to hold them together. Next, the cigars are braided and a second ribbon is placed about one-half inch from the feet. As the cigars age and some of that extra moisture evaporates they continue to mold into their new twisted shape, which will remain so even after they’ve been separated.

Thing #5: How to Smoke a Culebra

CigarAdvisor.com has two videos on smoking Culebra cigars: the first by Managing Editor, John Pullo, in which he describes how to smoke a Culebra, and a video we recorded for this article in which John, Fred Lunt, and I partake of the Gran Habano Tres Reyes Magos in a more social setting. What’s interesting, and quite different about the Tres Reyes Magos (meaning, the “Three Magi Kings,” or “Three Wise Men”), is that unlike most Culebras, it’s made with three cigars rolled in three different wrappers: #1 Connecticut, #3 Habano, and #5 Corojo, each representing Gran Habano’s most popular mainline selections.

Extra Thing: Watch Our Bonus Culebra Video for the Gran Habano in Action

As I mentioned, Culebra cigars are a rare find on your cigar shop’s humidor shelves…but worth a try, even if it’s just once. Those Villiger Krumme cigars are a regular production smoke – so click now if you’d like to experience firsthand what I’m talking about:

can anyone tell me if partigas makes any other cigars with the same tobaccos and wrappers as their culebra, i find them to be one of the better tasting cigars partigas makes great taste…