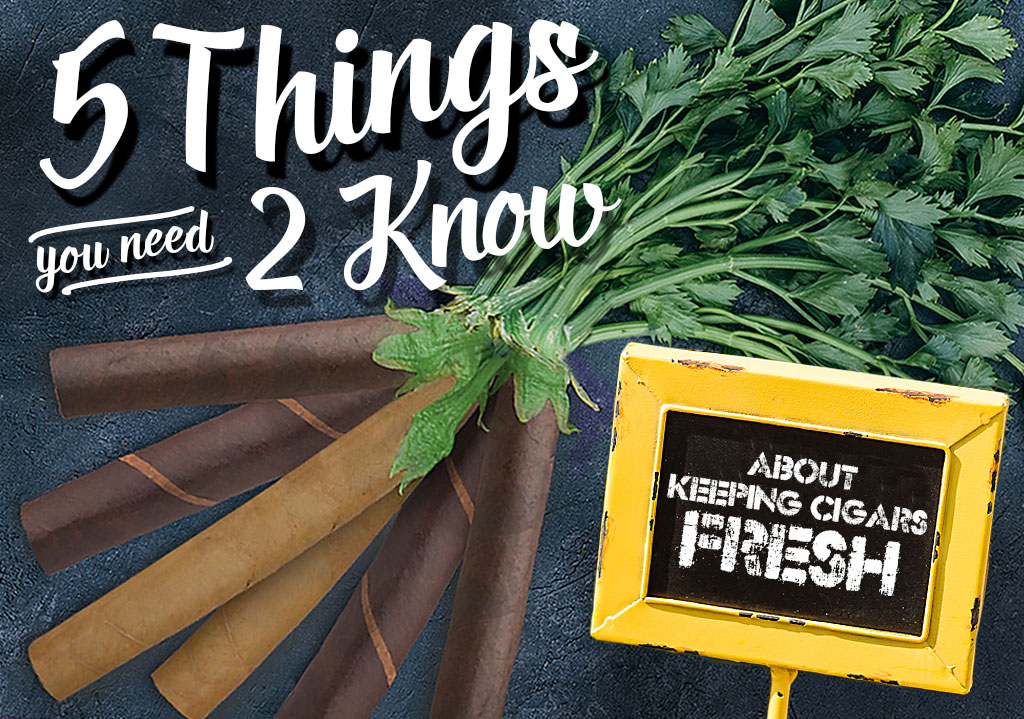 5 Things You Need to Know About Keeping Cigars Fresh

I’m going to bet that you’re already pretty good at humidor upkeep, whether or not you’ve used the Cigar Storage 101 tips we’ve talked about here at Cigar Advisor. So today, I wanted to send along a few tweaks you can use to get more enjoyment out of your smokes…because when it comes to keeping cigars fresh and safely put away, you’ll use any trick in the book you can.

Something that got me thinking, while on a recent cigar pilgrimage I made to the Dominican Republic: cigars seem to taste better when they’re smoked where they’re made. Whether it was just the sum of the setting and the experience (along with a generous helping of rum), I couldn’t prove it. So I asked one of the pros from Davidoff Cigars, and surprisingly, he agreed; the consistency of the climate conditions, from when the cigar was rolled, aged and smoked, all really do make a difference in how fresh it tastes. So it makes sense, then, that tobacco burns and tastes best when stored fresh, and as close to the climate in which it was made. And that’s why we make such a big deal about cigar humidification and humidor care.

Once you close the lid of your humidor, an impressive miniature ecosystem sets about its work of keeping your cigars fresh. Think of it as life inside a bubble, or one of those little terrariums: you’ve created a whole little world inside that exists exclusively to provide the ideal conditions to protect the inhabitants. And ideally, it’s a climate that’s consistent with – or at least similar to – the one where your cigar was made.

Keeping cigars fresh is easy, with a little attention to detail – and your taste buds will tell you if you’re doing it right. The basics start with seasoning a humidor; then, calibrating your hygrometer every 6 months or so, just to make sure it’s reading right. Remember that the humidor will do what it’s asked – maintain a humid environment – but keeping your cigars fresh is made harder when your hygrometer is spitting out false readings. Use these 5 Things to your cigar’s advantage:

The 70-70 Rule is Not a Rule. The age-old humidor rule/guideline/conventional wisdom was 70° temperature, 70% humidity for keeping cigars fresh – set it and forget it. Turns out it’s pretty hard to keep your humi at a solid 70 anything, especially if you see big weather changes from season to season: humid summer weather can raise your humidor’s RH, and a cold, dry winter can cause your hygrometer reading to drop a couple points because you cranked up the heat in the house.

Turns out there’s plenty of wiggle room in the rulebook…if you want to prevent mold while still keeping cigars fresh and ready, you can get away with relative humidity between 62 and 72%, and temps in the same range. Proper moisture content is achieved by lowering the humidity when you raise the temperature, and vice-versa.

It also depends on what kind of cigars you’re storing. My experience has shown that I get a pretty good burn when my hygrometer reads around 67-ish%; for my Cuban-smoking friends, most have had success storing their cigars as low as 63% RH. Some other Cuban cigar sources have confirmed this as well, though it’s hard to figure out why. For Maduros, a little drier can be better. Maduro wrappers are thick leaves, teeming with natural oils from the fermentation process. They retain moisture well – and being so oily, may not burn right if you keep your RH up at 70%. If you’re keeping a bunch of Serie V Melanio, LGC Serie R or Liga Undercrown on hand, try letting the humidity drop to 65% – mine fare much better when it’s a little drier.

Bottom line is to find the right balance in your humidor for keeping cigars fresh, happy and palate-pleasing – and variables like humidor size, type of humidifier, etc. all factor in to finding your cigars’ comfort zone. And if you’re using an analog hygrometer, expect some minor fluctuations…it’s more like a tolerance, as opposed to a hard and fast number when monitoring RH.

Location, Location, Location…Even though the inside of a humidor is a small space, the moisture levels will be different in different spots. The air inside moves around pretty good, too. So a couple of things about placing cigars in your humidor that will matter when keeping cigars fresh:

Cigars Are More Resilient Than You Think. If you’re leaving the house with a few cigars in tow, you can toss a few smokes in a Ziploc bag and they’ll be fine. More often than not, I just use my travel humi to make sure my cigars don’t get crushed.

A sealed box of cigars will keep fresh outside the humidor for longer than you might expect; you have a little bit of leeway before getting the cigars into your humidor at home. Let’s say you don’t have the room to store another 20 cigars…as long as the box is kept wrapped in its cellophane, your cigars will stay fresh for at least a week or two before they begin to lose their moisture. After a month, you’re pushing it – so smoke some cigars to make room within two weeks of bringing the box home, then open the new box and let the new sticks acclimate to your humidor.

As for re-humidifying a dried-out cigar, think of it like a houseplant. The plant has a wilting point: when it’s dry and you give it a little water, the plant bounces back. Wait too long, and the plant goes flat. In the case of your cigars, it depends on how long they went without hydration…if your humidor went a little on the dry side while you were away on vacation, they should bounce back without you noticing any difference. If it’s too dry for too long, your cigar may regain the proper feel – but may not taste 100% the same as the first ones you smoked from the box. In either case, be patient when you try and revive them, and let the cigars absorb humidity slowly. Shock them with moisture, and they can swell – or split.

Fresh Cigars, ROTT. That’s shorthand for “right off the truck.” I know you’re tempted to dig into that box of cigars as soon as they hit your doorstep…so dip right in and smoke one ROTT. If you pulled that cigar straight from the box and it burns a little (or a lot) wild, it’s too moist to burn properly and enjoy. As I said before, cigars seem to taste best when they’re smoked where they’re grown; so keeping cigars fresh from the factory often means treating them to a little extra humidity so that they’ll survive the trip to the cigar shop. It also may tell you that the cigars have not had time to acclimate to the shop’s humidor before they were sent to you.

So again, here’s where patience pays off in the form of a better burn. Let the rest of the box sit in your humidor for a week, and try another. How does it burn? How are the flavors? Are you touching it up a lot as you smoke it? This method of “resting” your cigars (if you pull them out of your humidor and let them sit for a few days, it’s called “dry boxing”) allows the cigars to acclimate to the conditions in your humidor, and you’ll get more enjoyment out of them once they’ve settled.

No Humidifier Lasts Forever. Everything has a lifespan, so make your choice of humidification device count. The basic green foam puck is fine for keeping cigars fresh, as long as you’re using polyglycol solution (the 50/50 stuff) to stave off mold. But the 50/50 solution will clog the foam’s pores over the course of a year or so, keeping it from releasing the necessary moisture to keep your cigars in ready-to-smoke condition (you’ll know this is happening because your hygrometer will consistently read too low). Great time to toss the green stuff and upgrade to a gel jar, crystals or beads. As long as you’re just using distilled water to keep them puffed up, the humidifier gel crystals will last for years; if you let the crystals go pretty dry before you recharge, it limits their lifespan at up to two, maybe 3 years at the most. Past the 3-year mark? Time for new gear.

If you’re using Boveda packs, it’s pretty obvious when they need replacing: the salts inside will feel pretty grainy, and the pack will be stiff. Toss, and replace with a new pack – one for every 25 cigars in your humidor.

You go through a good amount of effort to make sure your humidor is keeping cigars fresh and ready: you season the wood to keep an optimal moisture, the cigars are spaced properly, the cigars are rotated occasionally so they’ll all benefit from the air flowing throughout the interior of the box. So consider adding these extra tips to your routine, and you’ll be rewarded with a great tasting cigar each time you open the humidor!

I also like to season the cedar thin sheet separators that come in some of the boxes and place them in the humidor. Careful though as some of these are not cedar but oak or other woods. Break off a piece, flame it , blow it out and smell the smoke. You will know for sure if it is cedar.

Why toss the Boveda pack?? Re-charge in a baggie with distilled water.

Sure, you can do that – a Boveda pack will take on a limited # of “re-charges” though. I usually do a bunch of packs at a time in a large tupperware – just pour in distilled water and soak for a few days.

What about mixing flavored with plain

Dale – best not to store them together, as everything in your humidor (and probably the humidor too) will take on the flavor. More here: https://www.famous-smoke.com/cigaradvisor/should-flavored-cigars-be-stored-separately

i use a small tupperare style container that snaps shut very tight. mu question i only keep maybe 5 gars in it at a time,sealed in a zip lock and couple water type envelopes. is this ok to keep my gars smokeable

Hi Dan – if that works for you, sure – the zip loc is probably overkill though. I’d also take some extra precautions to make sure the water pillows are not coming in contact with the cigars (making them too moist in some spots). Also make sure to open the corner of the tupperware lid every once in a while to get some fresh air mixed in there (called “burping”) so the RH doesn’t get too high and mold grows.

How to Make a Cuba Libre + Cigar Pairing Recommendation