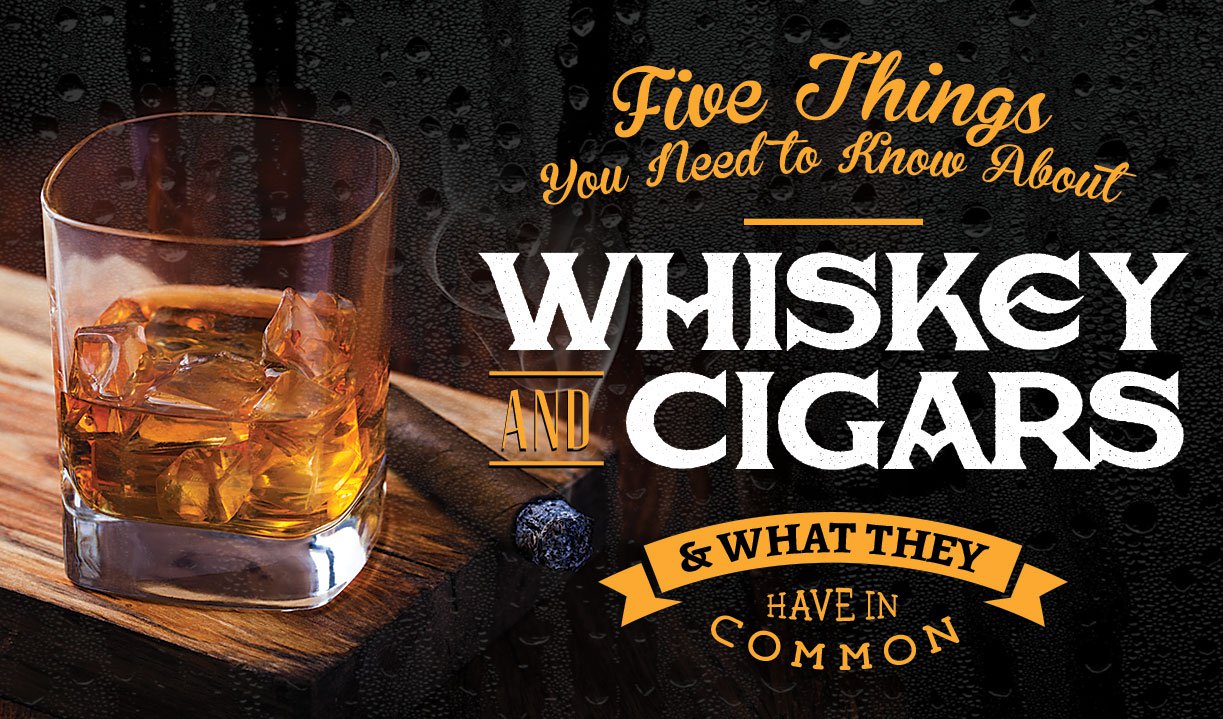 5 Things You Need To Know About… Whiskey And Cigars

And What They Have in Common…

“There is no bad whiskey. There are only some whiskeys that aren’t as good as others.”

We cigar lovers basically say the same thing: There are no bad cigars, only better ones.

A solid truth. And even just scratching the surface like this, a common bond between whiskey and cigars starts to appear…

They are both available in a variety of flavors, strengths and blends: spicy, sweet, mellow, full, Nicaraguan, Dominican – to name just a few.

Both often serve as a meditative getaway to cleanse and clear your consciousness: the same way you watch a wisp of smoke dance its way off the end of your cigar, your eye is drawn to how the sultry, honey-colored legs of your whiskey weave their way back down the inside of the glass.

Both are made to be savored: whiskey – or as it’s been called, “liquid sunshine” – is meant to be enjoyed slowly. So is a cigar; both were crafted with a lot of care and attention to detail, and with your satisfaction in mind; these flavors deserve your time and appreciation.

Upon further inspection, this relationship actually runs pretty deep…so I’m going to share 5 Things I learned that bond whiskey and cigars together: how cigarmaking dovetails with distilling, why a smoke is a natural fit with a pour of whiskey by its side, and what else these indulgences have in common.

Fair warning: I do not proclaim myself to be any sort of whiskey (or whisky) expert, but I’m willing to admit that I know just enough to be dangerous. I will jump at Crown Royal in nearly any form; I know that I like a Highlands whisky over a peaty Islay (say EE-luh), and I know bourbon is way too expensive to do as a hobby on a writer’s salary.

Doesn’t mean I can’t appreciate the art and science behind making ‘em, though.

Like Cigars, Whisk(e)y Flavors Will Vary by Region…No “e” in Whisky here, because we’re talking specifically about Scotch – and how the country’s geography (and terroir) impacts the flavor in the finished product. The whisky aisle at the liquor store by my house has handy little shelf tags under each bottle to tell me what region that particular brand or expression is from, and the general characteristics I can expect when I drink it:

A nice cheat sheet to have when you don’t have time for a full Scotch geography lesson (visit here for a full refresher, too), and it’s a solid intro to learning the different flavor profiles that are indicative of each of the different Scotch-making regions.

On the cigar side, we’re told, “it starts with the soil” – meaning a cigar’s flavor also begins with under what conditions, and where, the tobacco is grown. Let’s take Nicaragua  and its four primary growing regions as an example:

So when it comes to making whisk(e)y and cigars, where it’s from matters just as much as what it’s made from.

Whiskeys and Cigars are Painstakingly Blended Indulgences…Forgo any thought that blended whiskeys are just a mix of leftovers, or a bottling of whatever the distillery “has laying around.” It’s a carefully curated process, just like with the various tobaccos that go into cigars, and it’s done with the same result in mind: different batches of whiskey are mixed together, with the goal of producing an expression with desirable flavors. A blended whiskey starts with a few batches of barrel-aged malt whiskey; then, they might add a quantity of grain whiskey and other neutral grain spirits into the mix. After that, maybe some caramel coloring to get that rich amber hue.

I should note that single malt whiskeys are not blended; instead, they’re produced from single batches, and are bottled straight from the barrel. That’s it.

It’s the job of a Master Blender to combine component tobaccos to create a cigar and tweak the blend to maintain its consistency year after year. It can involve dozens of tobacco variations, and months or even years to get right. Interestingly, the same title – Master Blender – applies to the person at the distillery whose job it is to blend whiskey, and the goal is the same: produce consistent bottlings, year after year, by tweaking the blend with different batches or proportions of component whiskeys.

And if you thought the trial-and-error proposition of cigar making was challenging, try whiskey: a premium blended Scotch may contain “more than 60 individual malt whiskeys which must be blended in the proper proportions.”

Both Whiskey and Cigars are Aged to Perfection…Or shall we call it, matured.

While I don’t want to neglect mentioning that whiskey (like cigar tobacco) has a fermentation step, the processes are very different; what’s more alike is the aging process that both whiskeys and tobaccos must experience before we’re ready to enjoy them.

Then there’s whiskey, which shares much of the same process:

There is one big difference on aging, however: cigar makers say their cigars are ready to smoke when you buy them, but you can continue to age cigars in your humidor at home. More time spent in the humidor often can result in a cigar tasting more “rounded” as the oil content diminishes within the cigar, leaving you with a smoke that may taste a little smoother than it did a couple months before.

Whiskey, on the other hand, is finished aging once it hits the bottle; it only ages in the cask, and the time between distilling it and bottling it is what ends up on the label (i.e., 10, 18 or 21 year, or even the ridiculously eyebrow-raising Macallan 72 Year, selling at 60 grand). Which also means that that bottle of Glenlivet 18 isn’t now a 22, just because it’s been sitting in your liquor cabinet for 4 years waiting for “the right occasion.”

Humidor Meets Decanter: Presentation is Everything…Decanting is more often associated with wine (as in letting it “breathe”), but every old-timer I ever knew had a whiskey decanter and a set of glasses on top of the record player console, next to the TV tray tables. Decanting releases a wine’s aroma and lets it breathe; many argue that the practice doesn’t apply to whiskey, as a drop or two of water is more effective at bringing out a dram’s flavors than is exposing it to air. But putting whiskey in a decanter doesn’t hurt, either – more than anything, it adds to the presentation, while still keeping the contents fresh.

The decanter has the same kind of eye-catching appeal that a cigar humidor has: refined, serious, elegant.

If you think about it, a humidor is a decanter (of sorts) for cigars: made with an airtight seal, crafted to be an eye-catching presentation, and able to hold the amount of cigars you need at hand, until it’s ready to be refilled. And if you prefer your pour straight from the bottle at the bar, that’s very much like walking into the cigar shop and picking out that single cigar you’re ready to enjoy right now.

Things Are About to Get…Wheel. As we’ve discussed in the past, a flavor wheel helps us all speak a common language when comparing specific qualities and flavors of the cigars we like. And just like us cigar lovers, whiskey nuts use flavor wheels to identify the different sensations they taste and feel in their drink – and that helps them figure out what they like.

Ever see a whiskey tasting wheel? The vocabulary is very close to ours: wood, grain, spice, fruit, sweetness (like caramel and chocolate), nutty, earthy, floral, chemical, vegetal…there are a lot of tastes whiskey has in common with cigars, which is another reason they get along so nicely.

The flavors in whiskey and cigars are what keep us coming back for more; they’re strong, full, rich and warming. The smoke from a cigar warms your palate, the heat from whiskey stokes a fire in your belly. “Liquid sunshine” indeed – and depending on your libation of choice, that fire burns with an extra layer of nuance, such as the sweetness of bourbon, or the intense smokiness of peated Islay single malts.

Here’s a tasting tip: when you see or read a cigar review and someone says they detect a taste of coffee bean or charred wood, it’s not because they actually ate those things to compare…it’s all in the nose. Next time you smoke a cigar (or drink whiskey), taste and breathe out through your nose at the same time. You’ll sense the flavors a little more clearly, than on your taste buds alone.

With this much in common, I hope these five things about whiskey and cigars – and all the extras – have made the case for how and why both are high on our to-do list, and together whenever possible. All that being said, some still argue that bourbons make for a better pairing than whiskey or Scotch – your mileage and taste buds may vary, but that’s another discussion for another day. But two things are clear: it’s hard to doubt why a drink and a smoke have been age-old pals for such a long time; and with what’s left of a bottle of Oban 14 and a Perdomo Habano Barrel Aged Maduro waiting for me at home, I’ve got a very enjoyable to-do list to finish tonight.

This article was very well written and enjoyable to read. I learned a good bit from it.

Wow, I never knew before that cigars get aged for at least three months to ferment its flavor. I’ve recently started having interest in cigars when I joined my husband in an opening of an art gallery and some of the attendees were smoking it. I hope there’s an online store where I can get cigars delivered to me.

Hi Alice – glad you enjoyed. Click the link at the top of the page to get started!