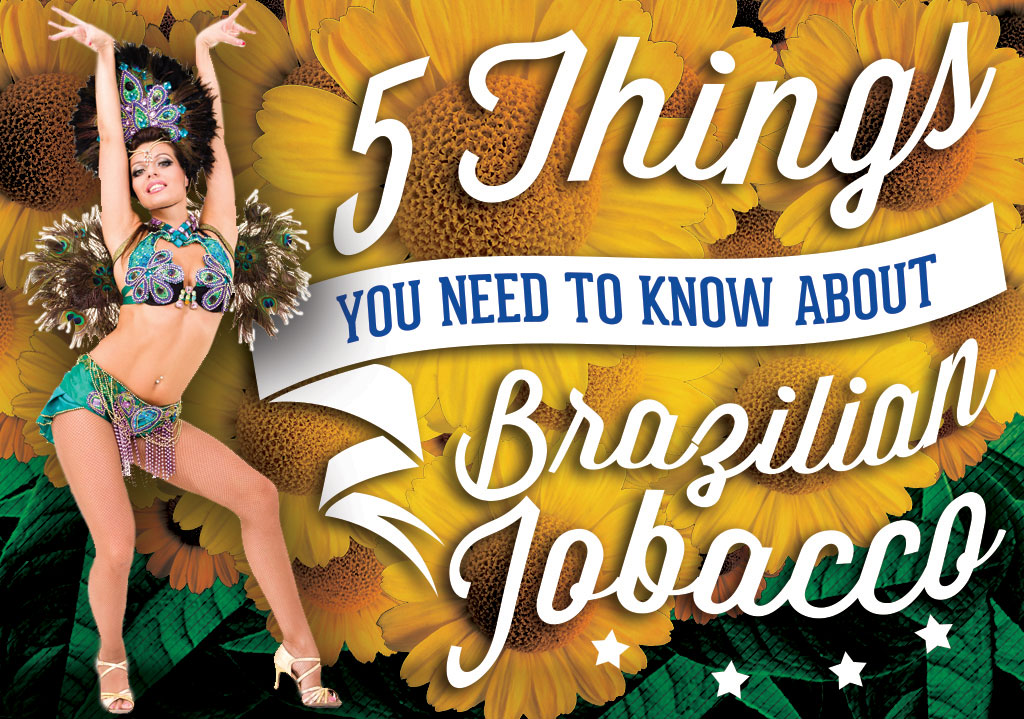 5 Things You Need to Know About Brazilian Tobacco

It’s true: Brazil is certainly not on your short list when you’re rattling off the best known cigar-making countries. It is, however, a popular destination for cigar blenders looking to inject a whole new level of flavor in their cigars: Alec Bradley, Brick House, Kristoff, Nub, San Lotano, Toraño, RoMa Craft…each of these brands (and many more) has looked to South America’s largest country for deep, dark n’ delicious Maduro wrapper leaves. But Brazilian tobacco can be super tasty when it’s added to the inside (hello, Liga Privada No. 9? That’s a Brazilian Mata Fina binder talking). We as cigar lovers are constantly on the hunt for new flavors and aromas to experience, and Brazilian tobacco delivers. Today, I’m going to give you 5 reasons why.

I ran across a quote from Crowned Heads Cigars’ Jon Huber back in the day, calling Brazil “the leading nation in tobacco export in South America.” Surprising, but true: right alongside sugar, coffee and soybeans, tobacco is one of Brazil’s most important agricultural exports – but even though it’s valued as a $2.62 billion export, it sure doesn’t get nearly the amount of attention those others crops do – even though the cigar trade has been part of Brazilian culture for centuries.

Here are 5 more fascinating facts about Brazilian tobacco that I bet you’ll find surprising – not only will these tidbits help increase your leaf knowledge five-fold, you can use ‘em as the ammo you need to look like the biggest brain in the cigar bar, the next time you want to talk Maduro…

There’s really only one place to grow it.

Yup, one place. Excluding Brazilian-seed tobacco that’s grown in other countries, most Brazilian tobacco is grown in the Bahia region – a province on the Atlantic coast, north of Rio and Sao Paulo. “Climate is key,” said Huber in that interview, and the different growing regions of Bahia all have their own different microclimates; so those wide-ranging conditions, coupled with the farming and curing techniques unique to each area, make for very different tasting tobaccos.

Each type of Brazilian tobacco is named for the location in which it’s grown. And most of it hails from Bahia’s Reconcavo Basin, an area broadly called Mata Fina.

Mata Fina is the main varietal of the most popular Brazilian cigar tobacco. It’s a sun-grown leaf that’s stalk-cut – and when fermented, makes excellent Maduro and Oscuro wrappers. It’s dark, smokes about medium in strength, and has a smooth, rich flavor that’s tinged with a natural sweetness. The earthy aroma is off the charts, too. Mata Fina comes in a few different varieties:

If you’ve never heard of them, you should know these other types of Brazilian tobaccos, too:

Brazilian tobacco was a Cuban go-to – or more accurately, a stand-in.

With Castro’s hostile takeover of the cigar industry complete, many of the cigar-making ex-pats who managed to make it out of the country landed in the Canary Islands. Montecristo, H. Upmann and Montecruz all had a brief stint there – but with much of the Cuban crop now off-limits thanks to Fidel, cigar makers had to look elsewhere for their fillers. “Brazil filler was used a lot in the early days,” said José Seijas, the now-retired vice president of Tabacalera de Garcia (Altadis USA’s big Dominican cigar factory). Apparently Brazil-grown leaf paired really well with Olor and Piloto varietals cultivated in the Dominican, and became one of the top go-to fillers and binders to round out some of their blends. “This was the combination that they liked the most after testing many other combinations,” Seijas told the Aficionado gang in an interview. When he was blending, he used a good amount of Mata Fina tobacco, because “it’s a good candidate to blend with other parts of the cigar.”

Brazilian cigars aren’t going to unseat Dominican and Nicaraguans as the Kings of Humidor Mountain any time soon, but their individual strains of cigar tobaccos bring a rich, more potent taste to the blend – making the cigars that use it very popular…today, anyway. When CAO was developing the Brazilia (which is made in Honduras, not Brazil), they went for a fuller bodied smoke by adding an Arapiraca wrapper leaf. The marketing people who were working with the Ozgener family (CAO’s owners at the time) said, “ehhhh, maybe don’t mention the Brazil part.” Apparently many tobacco brokers told him to keep the Brazilian angle quiet – or not even mention it at all. “A lot of people didn’t promote the fact that they used Brazilian tobacco,” said Tim Ozgener at the time, a nod to the fact that it was unknown and not in demand. Thankfully, he ignored the advice – and even doubled down with a big Brazilian flag scheme splashed across the box; today, the CAO Brazilia is still one of their most popular cigars. 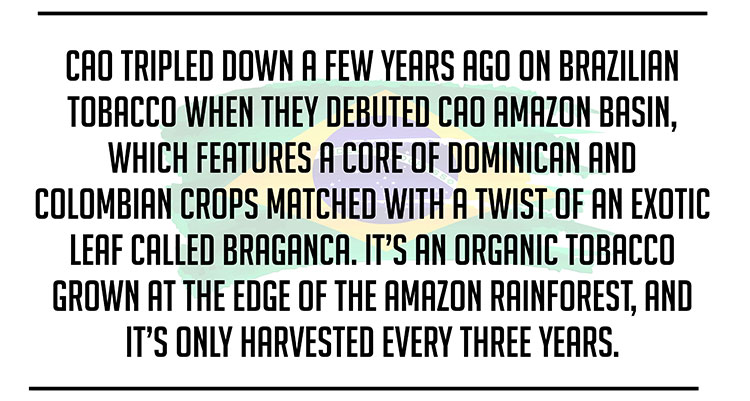 And not just the supermodels. Bahia is the heart of the Brazilian tobacco culture – it was also central to a very robust lace-making industry that came to South America with the Portuguese. The rendeira (lace makers) of northeast Brazil, all women, were renowned for handcrafting some of the most creative and beautiful lace patterns in the world, which were in high demand back in Europe. The rendeira were credited for having gifted hands; and it was these hands that were tapped to sort and strip the tobaccos, and roll the cigars using locally grown leaf. That’s not unique to Brazil, by the way – many women are involved with cigar production around the world, as they operate with a dexterity and delicateness that a man’s big ham hands can’t provide. They’re also better than the men at running the sorting table, because the ladies have sharper eyes – making them more skilled at parsing and matching colors when packaging the cigars.

Brazil Has Been Smoking Since, Well, Forever.

An offshoot of the tobacco that grew in the Andes, Mata Fina and most of its related tobacco strains are native to Brazil – which means that chances are, if it’s been growing there, someone (and I mean ancient someones) had the bright idea to smoke it. To this day, tobacco has been a staple of Brazilian culture, used in pipes and something-like-a-cigar form for thousands of years. It wasn’t until the ‘60s (thank the Cubans, above) that Brazil’s best kept secret got out, becoming a legit choice for premium cigar fillers and wrappers; still, the majority of the country’s crop is rolled for cigarettes. Why? According to an interview with Benji Menendez (yup, that Benji Menendez, of General Cigar) I dug up from about 12 years ago, “’Brazilian tobacco isn’t so much unappreciated in the United States as it is unknown,’ he says. ‘We are confident that it will be well received, once the consumer gets a chance to smoke it.’”

Listen to the man.

My sources for this article:

The Davidoff Escurio, with its Mata Fina blend is probably one of the most flavorful cigars I’ve had so far, and got me hooked on Brazilian blends

Great article Mr.John Pullo! And being a Brazilian myself it only makes me proud! Our classical cigarrilos are hand rolled with corn husk and are called “Palheiro” (from the word “palha” = husk) , I’m gonna be in the Us next month, gonna bring some of them with me, hit me up if you’re interested..