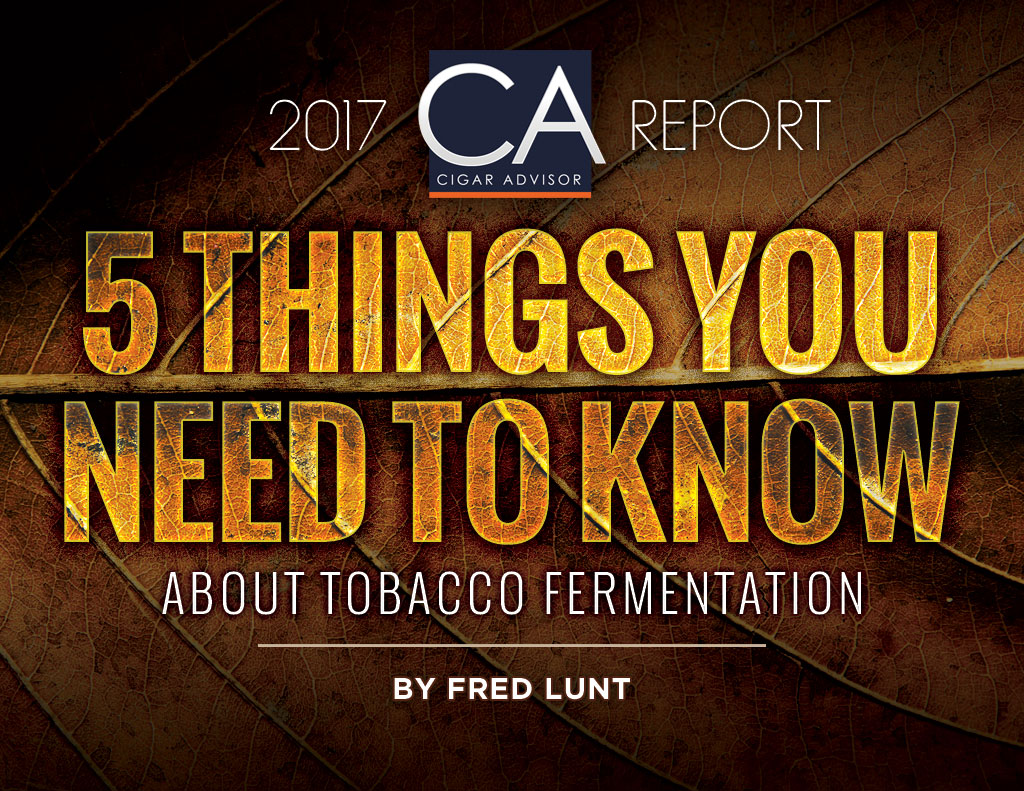 5 Things You Need to Know About Cigar Tobacco Fermentation

5 Things You Need to Know About Cigar Tobacco Fermentation

Fermentation is a process in making premium cigars that often goes unnoticed when it’s done right, yet is immediately noticeable if not done properly. If you’ve talked to a factory owner or brand owner, they’ll tell you just how critical the tobacco fermentation step truly is and how closely it’s watched and monitored. The catch is, that not many people know much about the process outside of the cigar makers and their workers responsible for doing it. So here’s the 411 on the five basic, need-to-know facts about fermenting cigar tobacco.

What is Tobacco Fermentation to Cigars?

Natural fermentation takes place after the tobaccos have been cured and separated. The tobacco is stacked into piles or stacks referred to as pilons, which are essentially compost heaps. The tobacco biochemically processes itself under pressure, dissipating any moisture and releasing ammonia from the leaves. As the process takes place the temperature is carefully monitored. Temps in the pile should reach 110-115 degrees but the pilons must be ‘turned’ as soon as they reach optimal temperature. This process can go on for weeks or even months, until the tobacco is ready.

After some time, the pilon is broken down and misted – watered with natural, clean water. The tobacco is then aerated for another 12-24 hours. A worker will roll up a leaf and smoke right then and there to determine if the tobacco is ready.

That the process for tobacco fermentation is used on other consumable products is no secret. You’ll see that cigars are often compared to wine – and fermentation is another process they share. Wine, kombucha, vodka, sauerkraut, cheese, and pickles are all fermented at one point in their production. The use of bacteria, alkaloids, and other factors will refine the wild flavors and bring a finished product. What makes tobacco fermentation different, however, is the transitions that the nicotine undergoes during the process.

As it’s such a critical part of a cigar’s production, fermentation needs its own room where the tobacco can mellow out. This, however, isn’t a room you’ll want to hang around in for very long: ammonia fills the air, and can be overwhelming for those who aren’t used it. Things can get unbearable as the temperatures rise, and the ammonia is choking.

Although the process is a delicate and labor-intensive one, tobacco fermentation is worth repeating. Doing so ensures all the ammonia is out of the tobacco and adds an extra step in the aging process. However, when a cigar is “double fermented,” this sometimes means the tobacco is placed in barrels for additional aging after natural fermentation and not that they have been undergone the process twice. Cigars such as Macanudo Double Maduro, Asylum Lobotomy, and Romeo y Julieta Añejo have all been double fermented; though Nick Perdomo beats all with the triple-fermented Champagne Noir.

Additionally, while maduro is a shade, the term also relates to a special fermentation process that only hardier leaves can withstand. Maduro leaves will face temperatures as high as 120 degrees and will have a longer fermentation process. As tough as it is, these steps are meant to draw out to tobacco’s sugars, leading to a sweet and robust smoke.

Maduro cigars were highly sought-after back in the days of the cigar boom (and sometimes even now), leading many cigar companies to fake their maduro and cash in on skipping the extra-long process. Terms like “boiled” and “cooked maduro” caught on as they would heat the leaves to alter the pigments. Other companies even dyed their leaves; often boiling a pot of water with sugar, molasses, wine, tobacco and other products that would be added to the leaves.

I don’t need to tell you that these fake maduros fall completely short of a naturally fermented maduro, but how can you tell the difference?

A natural maduro is beautiful, dark, smooth, and oily. They feature sweet and spicy flavors and often have notes of coffee, chocolate, earth, and leather. The freak-of-nature fakes may appear splotchy; the obviously inferior products will have nowhere near the amount of flavor as a natural maduro, and often times the dye will rub off on your hands and mouth.

Very interesting! Thanks for sharing!

Good reporting sir. To me, this process is the key differniator between good, damn good and event great…patience and understanding each leaf,.coax those flavors out naturally.

All things good to know, I’ve had some of these “fake” maduro’s and I always wondered why some of the coloring came off on my hands and mouth! I can’t belive some cigar makers would do this but anthing for a dollar! I guess but saying that the real Maduro’s can be detected right off a real delight to me!

Reading Time: 2 minutes #nowsmoking San Cristobal Quintessence Corona Gorda: a My Father-made Nicaraguan cigar that teems with “a rich-tasting brew of earth, wood, and peppery spices.” Click now for our review, and what you should know about this cigar, delivered in under 60 seconds…