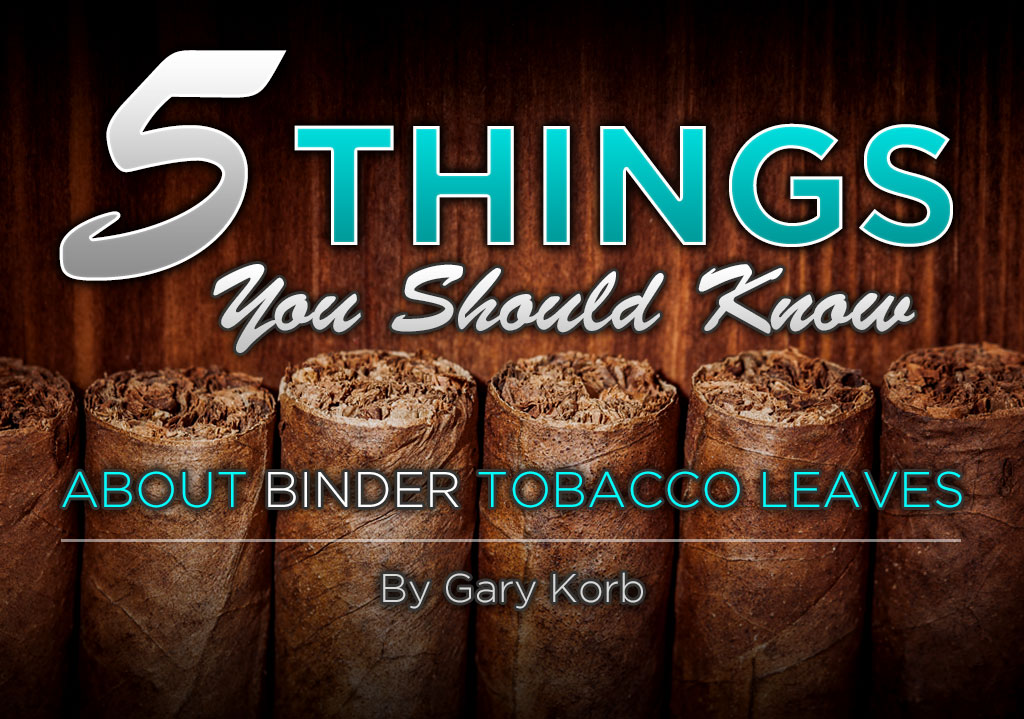 Five Things You Need to Know About Binder Tobacco

The Loneliest, Yet Hardest Working Leaf in the Bunch

Poor binder tobacco. why does it seem like this leaf used in every handmade premium cigar gets no respect?

It’s always the fillers and wrappers that get to play the leading roles of the blend. And although the binder may not seem all that important to the average cigar smoker, it’s very important to the master blender.

Every leaf is important to the overall blend, but most importantly, the binder has to blend well with the wrapper. ~ Ernesto Perez-Carrillo

As Richard Carleton Hacker writes in The Ultimate Cigar Book: “The binder is the ‘blanket’ that holds the filler in place. It is a specialized leaf, for it must be strong enough to do the job, yet it has to impart a complementary flavor to the filler and wrapper.”

Following are five aspects of the binder leaf that help define it in more detail. . .

In blending terminology the binder is referred to as the capote, which is Spanish for a “cloak” or a “cape,” as in capote de brega, a bullfighter’s cape. Since the binder is used to hold the filler tobaccos in place, you can see where this comes from. But the binder also has another equally important job; to keep the entire cigar burning evenly.

Although there are exceptions, most binder tobacco leaves are harvested from the lower middle section of the tobacco plant where you’ll find the Seco and Volado primings.

Speaking of primings, on a Criollo-seed tobacco plant, the leaves between the Volado (very bottom) and Seco (middle) are actually referred to as the “Capote.” The leaves on this part of the stalk tend to be lighter in color, flavor and strength, but the binder must also be a little thicker and more elastic in order to hold the filler tobaccos in place and protect them when placed into the molds and presses.

After all of the tobacco leaves are harvested they’re sewn together in pairs with thick thread and all hung together in the curing-barns to dry on saltas, or long wooden sticks in a single row. However, because some leaves tend to crack during this process, the wrappers and high-quality binder leaves are not sewn together. Rather, they are hung on thicker and smoother wood sticks called cujes where one leaf hangs on one side of the stick, and the other on the opposite side. This is done mostly to protect the delicate wrapper leaves, but the binder leaves must also be protected because any holes or cracks in the binder will prevent them from doing their job – holding the fillers together and producing an even burn.

Additionally, all leaves are separated by their primings, which are designated by using different colored threads. For example, Volado may use white threads, while Seco uses yellow, red on Viso, and black on Ligero.

As to curing time, the lower primings like Volado and Seco used for binder cure in about one to two years, whereas the higher priming leaves like Viso and Ligero cure in three years or longer.

The finished binder leaf will also have underdeveloped venations, which makes them naturally smoother in texture, and helps make for a better-looking wrapper.

Without the binder, there’d be no cigar. Well, you’d have a “cigar,” but in name only; it wouldn’t be a true premium, and more importantly, it would never burn right.  Therefore, when the binder is added to the filler bunch on the rolling table, it must be applied in a way that not only assures the cigar will burn evenly, but it must also be elastic enough to provide a smooth surface for the wrapper; otherwise, the finished cigar will have soft spots and/or appear bumpy. Additionally, it should have a certain amount of absorbency to help provide better air flow through the cigar. After the binder is rolled and sealed with some vegetable gum, the entire bunch is placed in the mold to prepare it for applying the wrapper.

Although every leaf in a premium cigar’s blend contributes to its flavor and aroma, binder tobacco tends to be more lacking in the former than the latter. This is because binder leaves tend to come most often from the lower half of the plant, so they get less sunlight, plus they receive less curing and aging time, which limits in the amount of flavor they produce. But what they lack in flavor, they often make up for in aroma – a key ingredient for most cigar enthusiasts.

What do the pros say about the binder leaf? I asked one of the best, Ernesto Perez-Carrillo, for his opinion:

“Every leaf is important to the overall blend, but most importantly, the binder has to blend well with the wrapper,” said Ernesto. “To me it is a key tobacco in the overall profile of the blend. If the wrapper and binder don’t blend well there is no way you’re going to get a blend that is going to be enjoyable. For me, it can be the difference between an ‘OK’ cigar and a memorable cigar.”

So, the next time you light up one of your favorite cigars, remember the binder. Raise a glass to it and give it a nod of thanks for making your smoke more enjoyable.

Excellent article Gary, Thanks. I learned something today.

Thanks for the education – always helpful!

Very very informative for sure…
What an art form!

CA is always a great source of information for me. Love the articles and advice.

Great article! I actually blended Freyja starting from the binder! I wanted to try to use a Mexican San Andres as a binder (and I was choosing between two Dominican wrappers: it became a Criollo ’98)… Well the Mexican San Andres binder was an immediate hit and the only leaf that didn’t move from the blend from the first written notes on a piece of paper to the final cigar!
It’s so true what you say that the binder never gets a spotlight and this is a Very Refreshing article with great information!!!

Very informative article. I will add this site to my weekly reading. Keep writing!