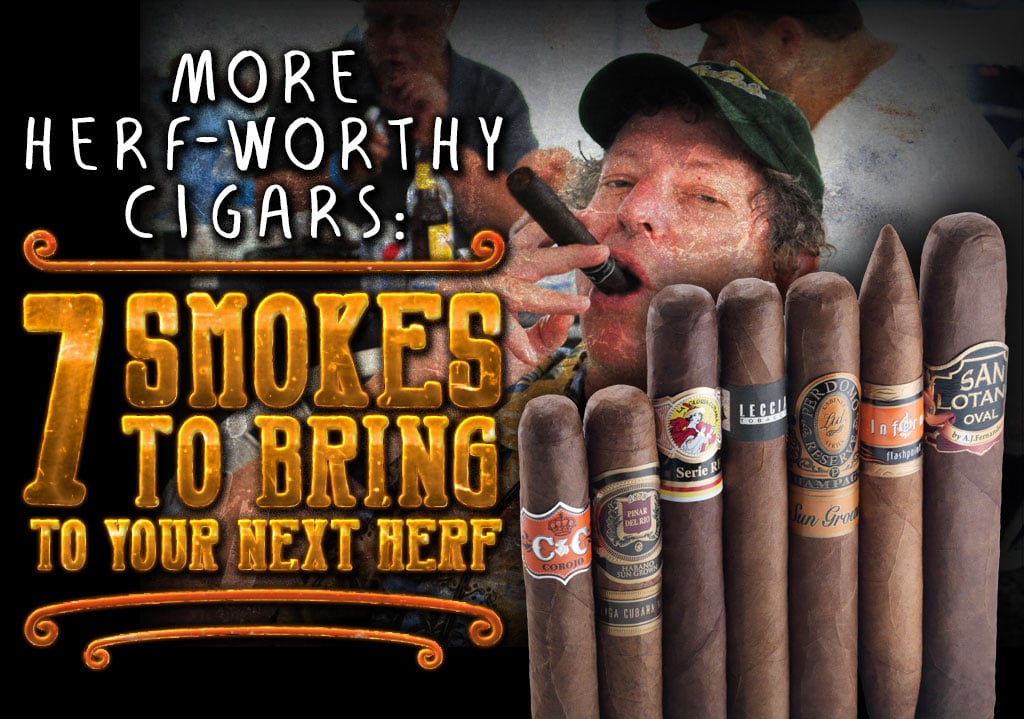 Cigars are fine and dandy on their own, but in good company, they become a catalyst for social engagement and make every cigar moment that much better. That is unless you’re just the worst kind of curmudgeon-y hermit who enjoys breaking the Frisbees over your knee that the neighbor kid accidentally throws on your lawn when the kid asks politely if you can throw it back. In that case, perhaps it is better you just leave well enough alone. But for those of us who enjoy the company of near and dear friends, sharing a smoke is at the apex of brotherly or sisterly bonding. That’s where herf-worthy cigars come into play.

What’s a “herf-worthy” cigar? I’m glad you asked (I assume)! A herf is a smoke session where people gather to smoke cigars and just hang out. But because these herf sessions are more special occasions, it goes without saying you need some special cigars. These cigars are meant to give you enticing flavor, fill the room with a pleasing aroma, and take your herf session to the next level. That’s why I compiled my list of 7 more herf-worthy cigars you can share with your buddies.

[Editor’s Note: This Item is no longer Available]

Touted as one of the most complex cigars in the industry, C&C Corojo cigars are a cost-effective when you’re enjoying herf time. Made to taste similar to the cigars of pre-1959 Havana, this cigar is rolled with a traditional Cuban triple cap finish which holds together a rich blend of longfiller tobaccos inside of a lush Ecuadorian Corojo wrapper. It’s rich, complex and robust, with a strength that shifts into full gear towards the end. It’s a cigar that’s meant for herfing with friends, but you’ll want to make sure you hang on to this to smoke all to yourself.

The Oliva family really outdid themselves with the Inferno Flashpoint. It’s rare a cigar comes along where you literally burn your fingers trying to get every last puff out of it and smile through the pain from the incredible flavor. But that pretty accurately describes the diehard Flashpoint fans out there. You think I’m kidding? You should take a look at my fingers. I could rob a bank and they wouldn’t find one fingerprint anywhere in the joint. With a consumer rating in the high 90s, this Nicaraguan-core cigar is wrapped in an incredibly smooth Ecuadorian Sumatra wrapper for a complexity that just won’t quit; and chances are you won’t quit this cigar either.

[Editor’s Note: This Item is no longer Available]

The Leccia Black has about as many tobaccos crammed in it as you’ll have friends crammed on your back patio herfing the night away. With a U.N. Coalition of tobaccos, this full flavored, full strength stogie is packed with Nicaraguan, Brazilian, Dominican, Kentucky fire-cured, and Tennessee fire-cured leaves, all wrapped in an Ecuadorian Habano wrapper. The result is a flavorful mesquite-like aroma and (mild) flavor among a plethora of other notes that come and go throughout the smoke. Perfect for when you’re throwing some meat on the grill or just hanging with the guys during the weekend, the Leccia Black is one cigar you need to get your hands on.

If you’ve never had the pleasure of a Perdomo cigar, then here’s the perfect introduction to Nick Perdomo’s world. He’s a master blender through and through, and one of the coolest dudes to smoke a cigar with, and his style and knowledge shine with this epic stogie. The Champagne line is one of his most recognized lines, with the relatively new Sun Grown leading the pack in terms of fan favorites. The sun grown Nicaraguan wrapper adds a heavy layer of flavor and strength that simply kicks this cigar into the stratosphere. There’s really only two words you’ll say after lighting up this cigar: My. Goodness.

[Ed. Note: PDR Sun Grown is no longer in stock at Famous Smoke Shop; click the image to view other PDR Cigar options.]

Abe Flores and Juan Rodriguez are the gurus behind the PDR brand, and they went a little off the deep end with the Sun Grown. I think PDR is one of the most underrated brands of all time. Each of their cigars is a home run, and those who have smoked them know how truly amazing this brand is as a whole. But like I said, the Sun Grown is like something the tobacco gods themselves have bestowed upon us lowly mortals. Using extra-long aged Nicaraguan and Dominican tobaccos with an oily Dominican Habano leaf, this deep red-brown cigar hits you with untamed complexity, a blast of almost every flavor on the chart, all while keeping the power leashed up at a true medium-full. I can never rate this cigar, because “A+” doesn’t do this stogie justice.

The San Lotano Oval is a favorite among the Cigar Advisor staff, and we’re sure it’ll be a fan favorite during your herf. Made by AJ Fernandez, this stogie is strong yet super complex with each flavor being drawn out of a mix of Nicaraguan, Honduran, and Dominican longfillers, a Nicaraguan binder, all wrapped in a Brazilian Ligero Habano wrapper. That means you’ll be getting spice, sweet, woody, creamy, and just about every other note your palate can handle without literally exploding in your mouth. In other words, this is a killer cigar.

Rounding out the list is perhaps the most perfect cigar in the humidor. No, really – it is. The idea behind this cigar is to follow the teachings of Fibonacci’s Integer Sequence. Really, the idea is all about perfection, and the makers of this stogie used that idea to find the perfect blend along with the perfect construction to make a cigar that’s… well… perfect. The flavor is complex and spirals just like Fibonacci’s Spiral, with a burn that’s on point from start to finish. And at its price point, it’s one of those herf-worthy cigars you just can’t pass up.

So round up the cigar smokers in your life, and light them up. I would say these are all perfect to spark a conversation about the flavors you are tasting when smoking them, but you’ll be puffing away on these down to the nub in quiet, trying to draw out every different flavor in each. Don’t believe me? Get them for yourself and try them all out with your buddies now!

Reading Time: 2 minutes Hear Arturo Fuente Cigars’ Liana Fuente tell us about growing-up Fuente, her passion for cigars, the Cigar Family Charitable Foundation, and more in this edition of the Master Blenders podcast…