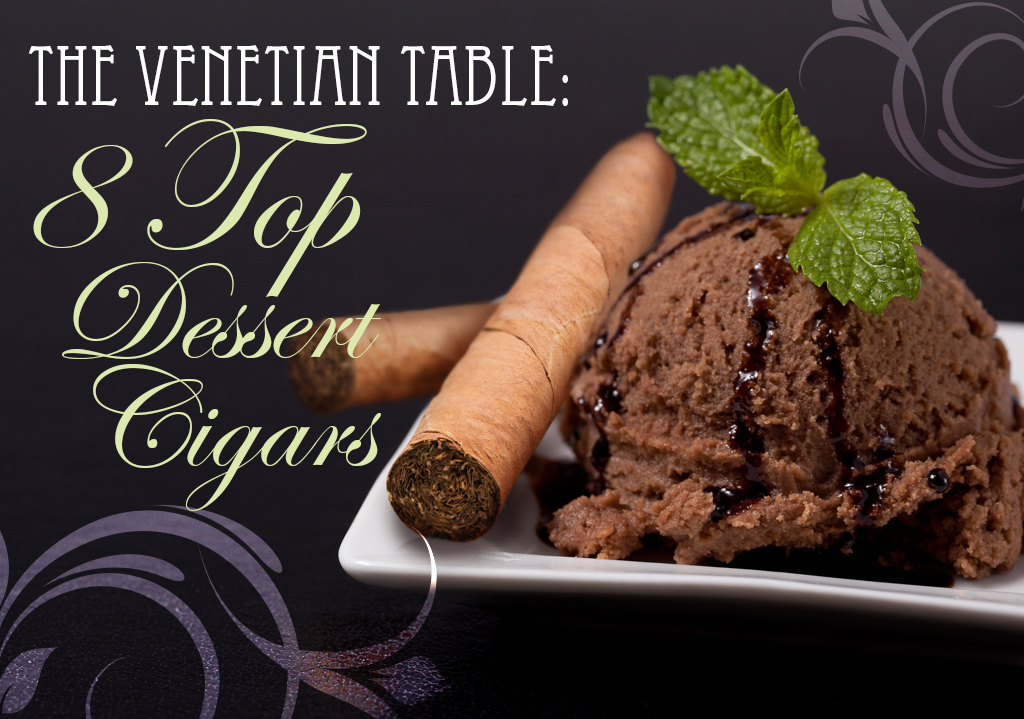 Nothing in this world puts the finishing touch on a great meal more than lighting up a good cigar. Since the term, a “good” cigar may be a subjective statement, let me focus in on a term I like to use known as Dessert Cigars. To me, these are the kinds of sticks that have a certain quality, maybe a natural sweetness to the tobacco that satisfies the taste buds after dinner, telling your brain that you are full, happy and content.

Maybe you’ve just devoured a thick sizzling rib eye with some sides of garlic mashed and rich creamed spinach. Or maybe you went Italian – pasta with a hearty red sauce (or gravy, as my northern Eye-talian family members refer to it), hot fennel saus-eege and something drenched in garlic and oil. Perhaps you went barbecue – ribs either dry rubbed or slathered in Kansas City style sauce and some sweet and savory smoked brisket. Or, how about a hearty seafood delight with shrimp, lobster and clams. (Damn, I gained six pounds just writing this shit.) And don’t forget your drinks like beer, wine, soda, etc.

Now that you’re ready to eat your monitor, my point here is that your palate is generally bombarded with a smorgasbord of tastes and you really have to choose a cigar whose flavors will stand up to what you just ate while cutting through the spicy, sweet, sour, salty, savory and any other flavor descriptor that begins with the letter s.

So I’ve gone ahead and chosen eight sticks that I deem as Dessert Cigars – premium hand rolled treats that I feel go great after a nice meal while satisfying the taste buds and olfactory senses. I like to refer to this grouping as the Venetian Table, and much like the dessert table you find at fancy weddings, an assortment filled with an eclectic mix of flavors, colors, scents and strengths.

Let’s start with a real beauty from CAO Cigars that harks back to the days when cars were like works of art. Master Blender, Rick Rodriguez, got this line SO right, and the Flathead V554 Camshaft is a work of art unto itself offering a ton of spicy, full-bodied tobacco flavor in a 5″ x 54 box-pressed format. There’s a plethora of tasty aged Nicaraguan tobaccos in this blend, plus an Ecaudorian Habano binder, capped by a dark, flawless, Connecticut Broadleaf wrapper that glistens with oil and balances the blend with notes of sweetness, giving this cigar a unique and satisfying flavor. And because the 54 ring is box-pressed it offers a really comfortable mouthfeel. I love this cigar and I know I’m not alone.

Drew Estate’s dark and oily offering originated as the cigar that the factory rollers created and smoked for themselves, but when Jon Drew got a taste, he knew he had a winner on his hands. The Nicaraguan and Brazilian fillers lend some huge flavors to this fuller-bodied smoke. But it’s the Mexican Otapan Negro Último Corte wrapper (try saying that 5 times fast) where the harvest is delayed by over 4 weeks, that result in a higher natural sugar content and a richer, creamier flavor.

The Latte is a unique blend created by Jonathan Drew and Rocky Patel, and I will go out on a limb and say that if you’re not a fan of so-called flavored cigars, this one will change your thinking. The wrapper is a silky, creamy Ecuadorian Connecticut with a blend of rich tasting Nicaraguan leaf inside. But it’s the immaculate and subtle blending of mocha that makes it a wonderful after-dinner treat… and the aroma is truly divine. I fired one up walking the streets in New York’s Little Italy and I was amazed at how many passersby commented on how good it smelled. Now that’s a switch!

This little gem is an expertly constructed perfecto with a distinct natural sweetness created by a balanced blend of well-aged Dominican fillers and an African Cameroon wrapper that looks like it was made from silk. There’s a cedary nuttiness to the flavor profile that just goes so well with an after-dinner coffee or espresso. Mellow, but very flavorful and aromatic, I think it’s called the Best Seller for a good reason.

This full-flavored bomb is truly a dessert smoke if there ever was one. Our good friend Rafael Nodal of Boutique blends created a stick with a pre-light draw flavor like I’ve never tasted. In our Cigar Advisor video review, the editors panel all noted deep, rich flavors of a baked pumpkin spice kind of cinnamon bread – and that is just from the tobacco blend of Dominican inside and the very dark and oily Nicaraguan grown wrapper. But then you actually light the thing and it just explodes with complex flavors. Definitely recommended after that big steak dinner.

While BOLD is the mantra for the good people at Camacho cigars, they took an interesting direction with the creation of this tasty stick. First off, do not be fooled by the word: Connecticut. While yes, the cigar is wrapped in a beautifully smooth Ecuadorian CT leaf, the inside is that same kick-ash balance of ballsiness (I think I made up a word) that these Hondurans are known for. I feel that it’s a great dessert cigar because of the balance of spiciness and creaminess that the blend delivers as it stands up nicely to any type of meal you can precede it with.

While my list here is truly an eclectic mix of strength and body, THIS cigar is the atomic flavor bomb of the bunch. I can honestly say that I ONLY smoke this cigar on a very full stomach because I’ll be loopy as a drunken jay bird if I light one up before dinner. Inside, you’ve got a blend of 3-year aged Nicaraguan tobacco. On the outside is a Corojo wrapper that is dark chocolate brown and slathered in its own natural oils, producing a powerful, yet sweet and balanced flavor profile. These amazing dessert cigars are truly for the seasoned smoker.

I am NOT a fan of flavored cigars – but I felt that the NUB Café deserved to be on this list as it is literally like smoking a hunk of dessert. It’s infused with coffee and I swear it smells like freshly baked chocolate cake. Now, I know this isn’t for everyone, but I view it as a nice change of pace and since I’m laying off the sweets for New Year, I can honestly say it’s the next best thing. They actually did a nice job with this dark and supple stick and I can’t tell you how many people in the office popped their head in the door of my office and said, “That smells amazing, what is it?” It’s dessert!

[…] all the salty, sour and spicy flavors that you just shoved down your throat. Here are some of the best dessert cigars currently on the market, defined by an eclectic cocktail of scents, flavors and consistency […]

Should’ve included the Java MINT!!!!!!! I call it ‘cigar crack’…and for a good reason! Even my wife loves them!

Read More
Cigar Buying Guides
Partagas cigars are one of the most famous names in smoke. Dating back to 1845, Partagas has a rich Cuban heritage; yet the subjects of our Tasting Guide, the 6 Partagas made outside of Havana – please palates worldwide just as well. Click now to see notes, reviews, and get the full Partagas experience in this Guide!
Read More

Cigar Tasting: How to Rejuvenate Your Taste Buds