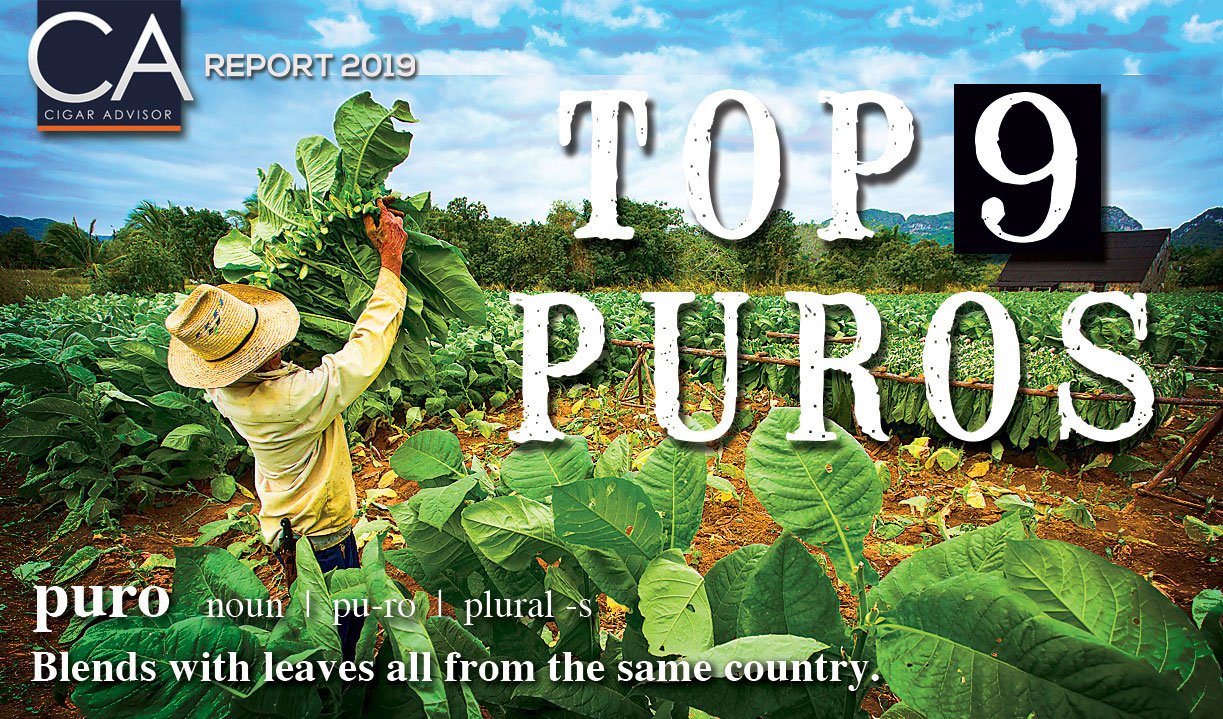 Ah, the celebrated puro cigar. So, what exactly is this sacred gem? Well, it’s pretty simple: a puro is a cigar whose leaves – filler, binder, and wrapper – are all grown in the same country.

Now the original puro is from Cuba, as every Cuban cigar is indeed made with 100% Cuban tobacco. The 4 growing regions in Cuba are: 1. Vuelta Abajo, the main region for Habanos where all types of leaf are grown; 2. Semi Vuelta, a region in the western heartland where Habano wrapper leaves are cultivated; 3. Vuelta Arriba, a source for all types of leaf, and 4. Partido, the area that concentrates on the growing of wrapper leaves.

Nicaragua is the land for dark, rich cigar tobacco and there are 4 main growing regions: 1. Esteli with its dark soil and thick leaves that provide that patented Nicaraguan earth and spice; 2. Jalapa Valley produces leaves both utilized for filler and wrapper that are of a sweeter variety; 3. Condega Valley, known for growing binder leaves that are thin and supple, and, 4. Ometepe, actually a volcanic island that sits within Lake Nicaragua, whose soil is loaded with rich minerals.

Honduras boasts 3 growing regions that produces leaves with strong flavors. 1. In the country’s south west is the province of El Paraiso, (which translates to paradise) where the Jamastran Valley lies near the area of Danli; 2. the Talanga Valley in the center of the country with its mountains and wind where sun grown tobacco is grown, and 3. Copan, close to the Guatemalan border in the west and a major tobacco growing region.

In the Dominican Republic most of the cigar tobacco is grown mainly on the outskirts of the city of Santiago. The Yaque Valley is the country’s premiere growing region where the rich soil is perfect for growers of Tabacalera A Fuente, Davidoff, and General Cigar. There are as many as 4,700 tobacco farmers producing crops in this lush Dominican valley.

Now check out my list of nine great puros – 3 from Nicaragua, 3 from Honduras, and 3 from the DR (sorry, but Cuban cigars are not sold in the United States and they’re not getting listed).

While Padron’s Anniversary cigars get all the hype and hoopla, it’s the 1000’s series that are the workhorse of the brand and are wildly popular with smokers everywhere. The 3000 is the Robusto sized version of the line, box-pressed in those oily Nicaraguan wrapper leaves that are aged a minimum of two and a half years. All the leaves for these babies happen to be grown and cultivated in Esteli, making for a very robust, rich, and spicy smoke. Heavy notes of espresso, earth, spice, and dark cocoa fill your mouth with a mountain of flavor. The main difference between these and the Anniversary lines is the level of complexity you will experience. The 3000’s have less complexity and carry more straight-forward flavors all the way through, but damned delicious and satisfying flavors they are. These are great smokes and always consistent.

Shortly after I interviewed him at Leaf Cigar Bar at Famous Smoke Shop, Ernesto Perez Carrillo’s Encore Majestic was awarded the #1 Cigar of the Year and I’d like to think I had something to do with it. The first thing to know is that the tobacco for the Encore is wrapped and aged in palm tree bark (tercios) allowing the leaves to marry for two full years. This wonderfully complex blend hails from three of Nicaragua’s growing regions: Condega, Esteli, and Jalapa producing a lot of flavor from the get-go. Oakiness and spice dominate the first inch or so giving way to hints of caramel, cinnamon and a really nice bout of citrus. The retrohale is quite pleasant with woody notes and more intense citrus. This is one hell of a premium smoke, with a smooth and perfect draw, well worthy of its number one status.

The Montecristo brand has always been known for producing mellow to medium bodied premium aged smokes in those silky golden wrappers. Well, the Monte Nicaragua has blown that to pieces with a full bodied, full flavored treat. This much hailed #10 Cigar of the Year in 2018 was produced by AJ Fernandez, so its flawless construction is no surprise. It’s a complex stick, very rich and full of that classic Esteli spice. Earthy from the start; you’ll get a coffee bean flavoring with a sweetness of cedar that stays consistent until about half way through, where dark fruit notes set in – it’s all just so pleasant to the palate. The retrohale gave me a buzz where the earthiness became intense. This is a hell of a flavorful cigar and paired so well with the multiple pours of the Balvenie Doublewood I enjoyed. Not your typical Monte and oh-so good.

Hailing from the San Agustin Valley in Honduras, the Gran Puro offers up a uniquely robust cigar and quite different than the regular Punch line. Rated the #10 Cigar of the Year in 2016, it’s a semi-complex smoke that packs a whole lot of spicy Honduran tobacco flavor. A cocoa and cedar medium-bodied sweetness appears at the start, with a whole lot of creamy smoke billowing from this superbly constructed stick. At about the halfway point, the strength picks up and a pleasant floral component makes its way in, which I always note that being a characteristic of better Cuban-made cigars. The retrohale is actually pretty sweet and clean and was consistent at the start and at the two-thirds point. You might say that this one is a sleeper, but not with the many fans of this top quality smoke.

Christian Eiroa only knows how to make exquisite cigars. The man who put the Camacho brand on the map brings us his CLE, and his all Honduran-made Corojo is a full-bodied blast of creamy flavor. The first thing you’ll notice is its unusual shape, 48 at the head bulging out to 54 in the center and back down to 48 at the foot. This stick offers up some serious complexity with that patented Corojo tanginess. Earth and dark coffee will hit you almost immediately with every smooth and perfect draw as the construction is impeccable. A vanilla oakiness starts to take hold and that’s when you’ll notice that you can’t put this damned thing down! I actually paired this with a bold Dominican style café con leche which made for one hell of an after dinner dessert.

All the tobaccos in this cigar are grown and cultivated in the Honduran Jamastran Valley. This is a true medium bodied stick, with a silky medium brown Sun Grown wrapper with a buttery smooth draw. Now this is not a complex smoke by any means, but instead gives off delicious straight-forward flavors all the way through, making it an extremely pleasant smoking experience. A cigar doesn’t have to be complex to be full of flavor and this Don Tomas is just that. There’s a distinct nuttiness that pretty much carries all the way through, with some spice, cedar, and a slight leather quality in the flavor profile. While this is a true premium, it’s almost priced like a budget cigar which makes it a wonderful value. If you like medium bodied with terrific flavor, this Sun Grown is for you.

Abe Flores produces some amazing cigars in his Dominican factory, and this Capa Sun Grown is as good as they get. First off, it’s quite an attractive stick to look at with its ultra-oily Habano Sun Grown wrapper leaf and its neat little pig tail cap at the top. The long fillers are an interesting blend of Habano, Criollo ‘98 and Corojo leaves that deliver a medium-bodied strength but a very full-flavored smoke. The construction is particularly noticeable producing an absolutely flawless draw and a noticeably sharp burn emitting a ton of thick smoke. It’s spicy and slightly peppery at the start with a leathery quality as well. But with every puff a wonderful creaminess builds and lasts throughout the finish. This is a superb medium-bodied smoke that paired nicely with a cup of joe. Really, really nice.

Solera is a method of aging brandy, wine, sherry and rum for centuries, and now Aging Room uses the Solera method – which combines different vintages of leaf during various stages of the aging process – for fuller flavor and deeper complexity. Dominican Habano long filler leaf is used for both the filler and binder and it’s covered in a simply gorgeous, chocolate, supple and oily wrapper. A distinct coffee flavor dominated the first third of the cigar with a hint of cedary sweetness. It even starts to pick up notes of milk chocolate about the one-third mark, then a nice earthiness enters around the half way point that takes you all the way home. The retrohale is easy going and sweet and the aroma is sweet and woody. I enjoyed a dark rum whose sweetness was the perfect match for this well-made cigar.

The King is Dead The Last Payday by Caldwell

Caldwell Cigars owner, Robert Caldwell is renowned for finding the rarest tobaccos to make his cigars, including the vintage 2008 Dominican Negrito wrapper leaf. While the binder is a Corojo, the filler tobacco is an eclectic mix of three different Dominican tobaccos. A blast of sweet cedar and spice hit your palate almost immediately, delivering a lot of rich, creamy flavor up front. Coffee and cocoa make their way into this cigar around the one-third mark making for some over the top delicious complexity that actually intensifies in sweetness as the cigar continues to burn. These sticks are impeccably made, packed with tobacco but produces a perfect draw and burn. I matched this flavorful puro up with a 20 year old Taylor Fladgate Tawny Port wine alongside a cup of coffee which turned out to be the dessert from heaven. These are truly unique cigars and well worth a try.

There you go again, making me smarter. Great article.

Thanks buddy… smarter is good…

Interesting selections. Been told that Cuba uses a lot of off the island tobacco?

I really wish the fabricas would pt that info on the cigar bands. The simple addition of the word “PURO” on the band would not only let the smoker know but would probably boost sales.

Reading Time: 8 minutes It’s the 2018 Cigar Journal Cigar Trophies: Read as we reveal to you – and give our take on – the winners for “Best Brand,” “Best Cigar,” “Best Value” and more, along with a few reasons why each cigar earned its trophy.