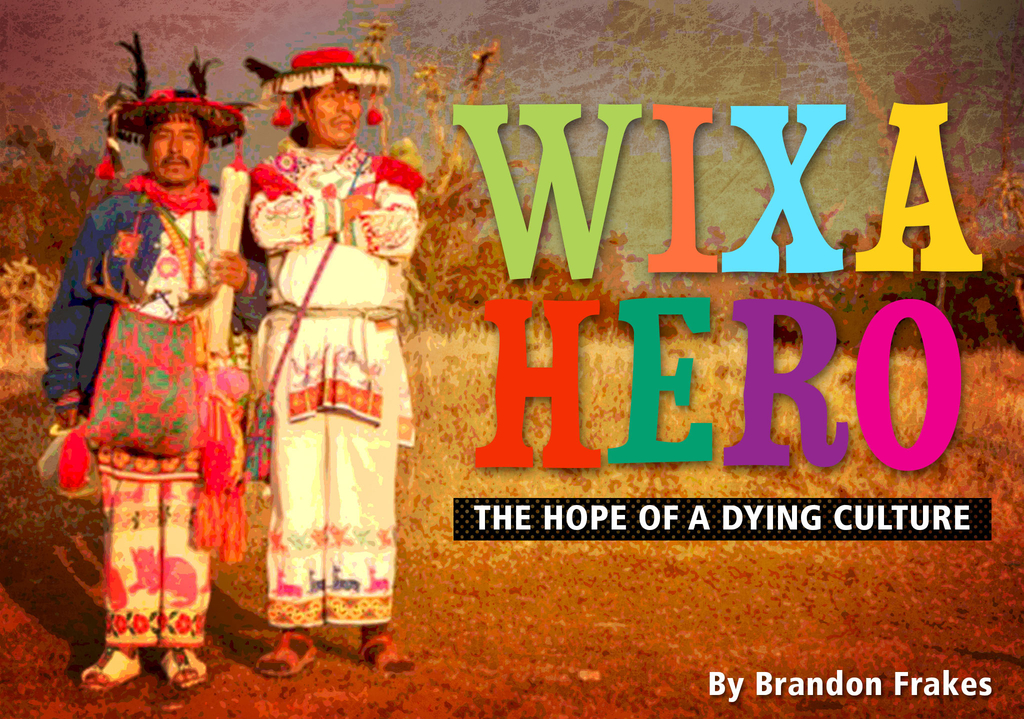 Tucked away in the SierraMadreMountains of Central Mexico, 7 hours by bus to the nearest large city, a community belonging to the indigenous Wixárika (pronounced Weeks-Are-eeka) people are struggling for survival. The Wixárika people are some of the oldest and proudest groups in all of Mexico and are fully prepared to die rather than leave their communities and culture behind.

The Wixárika culture is vastly different than the world you and I live in today. The once flourishing culture is now disintegrating into a few representing communities scattered throughout central Mexico. For almost 1,000 years, the members have relied on 2 pillars of survival; one is farming tobacco, corn, and beans, the other is perhaps the most

captivating art imaginable. Although farming is necessary for food production, art is the true foundation of this beautiful culture and accounts for over 75% of the total revenue for the communities annually. The important aspect to look at is over three-quarters the financial support comes from less than 24% of the community’s members, the artists.

Art of the Wixárika is without exaggeration, their identity. If you were to take away their ability to do their art, the entire culture would fail to exist. To translate that into the American way of thinking, no more family time, no more income, no more food, and no more personal beliefs.

A rich Mexican cigar culture has been developed over many years. Tobacco is known to the Wixárika as “Ya” and “Macuchi Tobacco.” It is known to have been cultivated for thousands of years in the SierraMadreMountains for two cultural purposes. The first is used during sacred celebrations and pilgrimages to their sacred land which is the San Luis Potosi Waterfalls. The Wixárika smoke one of the oldest versions of cigars – tobacco wrapped in corn husk. This is much like the cigars Christopher Columbus would have seen Native Americans smoking upon his arrival in the new world. This method of rolling cigars is still used today and is typically done during special rituals before a pilgrimage that celebrate the Fire God, “Tatéwari,” whom they believe gave them tobacco. There has been a dying Mexican cigar culture.

The ritual is performed by a shaman reciting prayers and setting a ball of tobacco on fire. He then touches the burning tobacco with a group of feathers and blesses it. After the prayers are concluded, he takes the tobacco and rolls them in corn husks to make ceremonial cigars and hands them to every member of the community. The cigars are then stored in special bags called a “tecomate” or “bule” to be carried to the Holy land where their pilgrimage ceremonies will take place. It is their belief that corn complements tobacco since both represent breath, memory, and life with corn representing food for the body and tobacco representing food for the soul. It is this belief that encourages them to grow tobacco and corn side-by-side for a simultaneous harvest and a more harmonious union of these two special crops.

The second use for tobacco is for medicinal purposes. Wixárika believe there are two different origins of illness. The first origin of illness attacks those whose ancestors originated from the mountains. These illnesses can be healed with the help of a shaman no matter what the illness may be. The other type of illness targets those who come from the Spaniards, which they believe cannot be healed by a shaman, but by medical and scientific means only. Although there are different methods to treat internal illnesses, tobacco is used to help heal injuries such as animal bites and bone fractures and to remove evil curses by cleaning a person’s soul.

Tobacco is also used as protection for children. Parents put a small amount of leaves in a fabric bag and give it to their children to wear on their neck and wrists. This is said to help protect them against snakes in the rivers where they bathe and retrieve the community’s drinking water. When they reach 5 years old the children are not considered vulnerable to snake bites and they are allowed to stop wearing the leaves. After removing them, the children burn the leaves to return the tobacco back to the Fire God, thus completing the circle of protection by allowing the Fire God to bless others with the powers of tobacco.

The Art, Shaping a Culture

The Wixárika people’s pilgrimage to their holy land near the San Luis Potosi Waterfalls occurs once a year. The falls are located over 200km from their communities and are traveled by foot on the same path since the beginning of the culture. When they arrive, certain members partake in a religious ceremony that involves the smoking of the Peyote flower and traditional Wixárika cigars. In doing so, the members of the culture have visions they believe to be direct messages from their Gods in how to live and where to steer their lives. Immediately after (sometimes during) the ceremonies, artists transcribe visions onto different forms of traditional art. The most common form is covering hand-carved wooden sculptures with glass beads 75% the size of a BB. The mosaics are shaped into animals and other objects symbolic to their culture such as animals, bowls, and boxes. The artists then carefully cover the sculptures in a special wax from the south of Mexico, which retains adhesion over long periods of time. After the sculpture has a perfectly even layer of wax, the artist uses a long needle to place appropriate color beads one at a time.

Depending on the size, sculptures may have anywhere from 1,000 to 20,000+ beads, all placed individually. Meticulously, they create numerous traditional symbols seen during the ritual and within the finished work of art therein transcribing the message their Gods have orated. For comparison to our culture, the same emphasis we place on our alphabet and language, the Wixárika place on their language of symbols. Recall to when your children brought home worksheets outlining each individual letter, the children of the Wixárika communities are doing the same with their symbols instead of ABC’s. Because of this, each completed art piece tells a unique story. And like ancient writings on the wall, they are open to interpretation as to how you see them benefit your life.

The Wixárika people are in serious danger of their culture dying off. Their main water source is far from their communities and is not safe for drinking without an entire day’s worth of purifying, and even then, there are no sanitary containers to store the purified water longer than a couple of days. In order to save their community, they rely on their artwork and agriculture to produce some sort of revenue. Farming alone accounts for just a small amount of income or trade while their meticulous artwork is left to supplement the rest of their revenue.

Sadly, the blessing of small beads that gives their art identity is also the curse that damages their eyes after working daily to create the art. As a result, the artists must stop creating art while in their 30’s and thus become a member of the community that consumes revenue instead of generates revenue. As more and more artists lose their eyesight, less revenue is available to support the cost of agriculture and basic needs of the population. With these two main issues, it forces members to do one of two things: either leave the community and culture behind to seek work in larger cities such as Guadalajara and Mexico City or fight for survival in a famine of basic resources such as water, which has proven to be a deadly fight.

WIXA HERO is a company with a mission to be the connection point between the dying Wixárika culture and the American market that has the ability to save it. The name reflects the mission: WIXA, representing the Wixárika culture; and HERO, representing the customer because every purchase literally “Saves the Day” for a WIXA HERO artists and their community of 1,000 Wixárika members.

WIXA HERO artists are paid for every work of art they complete – regardless of whether or not it sells. Though with every purchase, WIXA HERO sends down magnified glasses for the artists to work more comfortably, portable water purification systems, and a percentage of every purchase goes toward the Wixárika Growth Fund – raising money to construct education centers, permanent water purification centers, and much needed infrastructure.

WIXA HERO is accepting donations of glasses, both prescription and cheaters, that can be sent to the artists for a more comfortable work experience and a newfound longevity.

Brandon Frakes is a contributor to Cigar Advisor magazine.

Reading Time: 8 minutes There are lots of great cigar lighters to choose – but with so many different features and a wide range of price ranges, which is the best one for you? Get the low-down on the highlights of these 10 affordably-priced lighters, and see…

Welcome Back To The Famous Cigar Blog