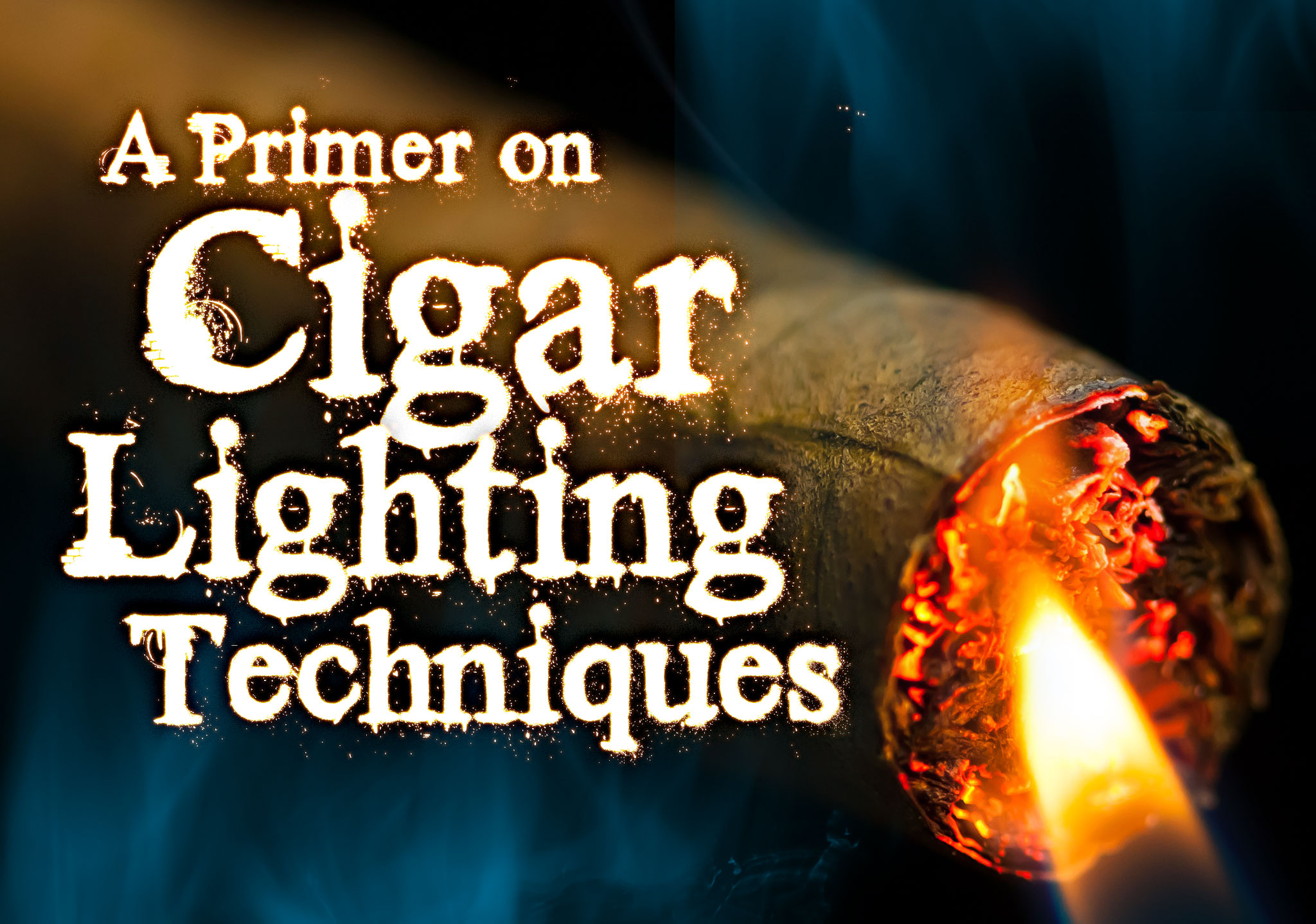 A Primer on Cigar Lighting Techniques

When you light-up a cigar you probably don’t think very much about how you light it. Well, as a “professional cigar smoker,” this is one of the things I do think about, so I thought it might be fun to look at the different techniques people use to light their cigars.

Before I get into them, here are a couple of things to keep in mind with regard to flame. The blue portion of the flame is the hottest. This is why torch lighters are so effective for lighting cigars. Moreover, this uber-hot flame permits you to “toast” and light your cigars without scorching them. As described below, if you can help it, you really don’t want the flame touching the tobacco. That’s especially important in this case, because the blue flame is so hot, you can hold the torch several inches from the foot of the cigar and still get a really good light.

That brings us to the white part of the flame. This part of the flame is pretty damn hot, too. Want to find out? Hold your open hand palm down about 6 inches above the tip of a “soft” butane flame, or a match. You’ll feel the heat almost instantly. This is also why you needn’t touch the tobacco when using a regular butane lighter or match. If it can burn your skin from that distance, imagine what it can do to a razor thin wrapper leaf at close range.

And speaking of matches, if you prefer to use them over a lighter, use a long cedar wood match (or a spill) rather than book matches. They offer a nice aroma when lit, and give you more time to get the job done.

I think the reason so many cigar smokers just “go for it” is that they don’t have the patience to light a cigar in the traditional method, which I’ve summarized below.

Without repeating the whole sequence here, basically it’s a two-step process: Toast the foot entirely, blow on it until it glows all red, then holding the cigar in your mouth at about a 45-degree angle, apply the flame without actually touching the tobacco and puff, drawing the smoke slowly through the head.

This is where the cigar smoker clips the cigar, puts flame right to the foot and puffs away. No toasting, just flick the ignition switch and go, usually with fire emanating from the foot like a dragster doing the quarter-mile.

The “Roll, Puff and Blow”

A little closer to the traditional method. The cigar is toasted, then the smoker rotates the cigar while applying flame to the foot and puffing. Once the smoke takes, turn the foot toward you and blow on it. This helps ensure that the entire foot gets lit evenly.

This is similar to the above method except during the toasting process you blow on the foot to see how you’re doing. You notice some black, unlit areas still left on the foot. Normally, you would gently blow on the foot while rotating the cigar to allow these areas to catch. But using this method, the smoker keeps hitting the blackened areas of the foot with the torch flame until they glow like a branding iron. All this does is cause the tobacco to produce more tars, which may turn the cigar prematurely bitter.

I kind of like this one, though it involves a little extra work. The cigar is first toasted with a torch lighter, followed by a cedar match (or a soft butane flame) to complete the process. The advantage of this is you get the best of both worlds. A cooler flame to toast the cigar followed by a white-hot flame to ensure the tobacco takes completely.

This is very cool. I saw someone do this in a video a while back titled Three Matches. You need three long cedar matches for this one, and it takes a lot of patience.
Important: Do not clip the cigar first! I’ll explain why later.

Light the first match, hold it in close to and in front of the cigar and rotate the cigar as you toast it. Eventually the match will burn down. Be sure to knock-off the ash of the match as you go to keep it burning properly. Put it out and immediately move on to the second match, concentrating on the center portion of the foot as you continue to rotate the cigar. Again, this must be done very slowly. By the end of the third match, the foot should be pretty well lit and emanating a good amount of smoke. At this point, clip the head and draw on the cigar. That’s it!

The reason for not clipping the cigar first is, the gentleman who showed how to do this felt that aromas and flavors coming from the flame source could pass through the cigar and affect the flavor of the tobacco. Personally, I don’t buy it, especially when torch lighters burn so clean. Moreover, the guy in the video admits that he hardly ever uses this technique due to time constraints, but it’s fun to try when you do have the time.

Regardless of how they were taught to light a premium handmade, most cigar smokers eventually develop their own personal method for getting the job done. Sometimes I see someone lighting-up and I want to cringe, but in the end it’s really a matter of to each his own. Or, to look at it another way, when was the last time you corrected someone on how to light their cigar?

Finally, your own personal cigar lighting methods are welcome in the comments field.

Glad you enjoyed the article John, we are trying to offer some practical advice here to enhance the enjoyment of smoking cigars.

Please invite your friends to read our blog.

I have unknowly been using the The “Overkill” method to light my cigars since the beginning. I have seen both cigar manufacturers and Cigar Aficionado writer/contributors at the annual Las Vegas conferences use the The “Roll, Puff and Blow” method. Now I know why, and for now on I too will use this method for better cigar taste and enjoyment. Thank you for this very informative article!
John Sackett

Will do! I really like Famous Smoke Shops’ cigars, your outstanding catalog displays/write-ups (“the best catalog” with cigar strength ratings/taste, etc!), pricing, and an A+ website! Thanks again!! John

I’ve been following @Famous_Hayward and I think these blogs and short articles are GREAT! It’s really important for people to understand that cigar smoking has so much more to it than simply “select-cut-light-smoke”. If you do one step improperly, you can potentially destroy the flavors of what would normally be a fantastic smoke.

I really enjoyed this article and comments.

As I wrote in a blog a while back titled “Lighting Cigars: Lighter Fluid vs. Butane”(http://cigaradvisor.blogspot.com/2008/02/lighting-cigars-lighter-fluid-vs-butane.html), “I filled the lighter with Zippo Premium Lighter Fluid. The can states: “Clean Burning/Improved Ignition/Low Odor…I lit up several cigars with my Zippo, and frankly, I didn’t taste anything funky in the cigar. Plus, I surmised there was “truth in advertising” with regard to this more refined blend of lighter fluid.” Since you say your cigars taste “normal” you are probably using the Premium fluid. The main advantage I found to using a torch over the Zippo was it took less time to toast and light my cigars.

I am a flamethrower! guilty as charged, I will try the roasting method tonight with cigars that just arrived today from Famous Smokes!

Great informative article the best I’ve seen on the net so far, I unknowingly also was using the overkill method and my Por Larranaga Petit corona was ruined so will be using the Roll puff blow method from now on.

I learned a long time ago to use the Roll, Puff and Blow method (even though I often end up torching by accident). I recently won a 5 pack of Gurkha Vintage Shaggy and I don’t want to ruin them. Since there is no wrapper at the foot, how would you recommend lighting them?

I bought a pile of Spanish cedar scrap ends (3/8″x4″x10″) to use in some tupperdors for overflow smokes — when I get a little over excited shopping, I guess. I had to cut the scraps to fit the containers, and then took the leftover pieces and made long, thin 10″ sticks that are great for lighting cigars. Spanish cedar smells very nice when burning, and though it takes longer than using a torch, I like the effect, and darned if I don’t feel “green” for recycling my scraps!

Hi Daniel. You are correct. The blue part of the flame IS the hottest. Apparently I had received some erroneous information a while back and instead of checking it out I took it verbatim. However, I did fix it in this similar article: http://www.famous-smoke.com/blog/post.cfm/how-to-avoid-torch-flame-overkill. I will update this post as well. Thanks for pointing that out and happy smokes,
G~

Uhm I thought the blue was the hottest and white is coolest hence it’s a BLUE flame ?
Correct me if I’m wrong

I feel vindicated! Being Puerto Rican, I mimicked the older men in the family as they lit their cigars all through the 1950’s-90’s. When I lived in Key West, a few elderly Cuban gentlemen taught me to refine my technique and it improved my cigar smoking experience. I make it a practice to avoid correcting others but cringe when I see friends take a careless approach to burning this article of pleasure. I will, however, share the “secrets” with friends that I trust and, after asking if they mind a constructive suggestion. Enjoy “sus tabacos, mi amigos.”

With out cutting the cigar I like to gently toast the cigar ( using the lighter from a distance to bring the foot to a soft glow ) I then clip the cap and blow outward once then begin to toke. Without the lighter flame as to not bring the heat of the lighter into the cigar.

My best preferred lighting a cigar is: Cigar ala flambè.
You need a cognac glas, put it upside down on the table. A fine Cognac on the foot of the glas. Make sure to not spil. Light up the cognac, hold the cigar in a 45 degree and roll it over the flame. and voila. A cigar ala flambè.
But be very careful. You can get your whole house on fire, due to cognac spil, stumbled on the table after lighted it up.

Why I Now Snub Cigar Snobs Even Harder