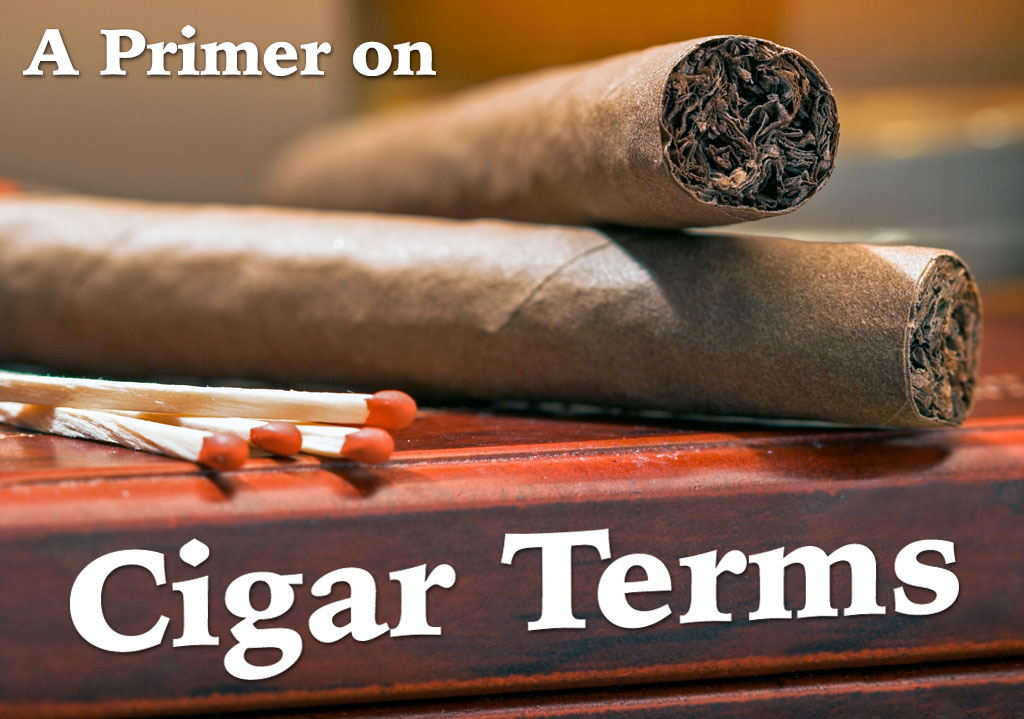 In 15 years of cigar smoking, I’ve come to realize that cigar makers have no problems using terms very liberally, much to the chagrin of cigar newbies everywhere. In this article, we’ll explain some basic to intermediate cigar terms the average cigar smoker is likely to encounter.

As for the construction of cigars, here’s how it breaks down:

• Fillers: The “core” of the cigar. Longfillers are long leaves of tobacco. Shortfillers are scraps of longfiller tobacco that has been cut. A blend of the two in a given cigar is called “mixed fillers,” or a “Cuban Sandwich.” Generally, the more shortfillers in a blend, the cheaper and lower the quality.

• Binders: Often wrapper tobacco that has been rejected because of blemishes, these leaves surround the core tobacco bunch.

• Wrappers: The most pristine leaves; surround the filler/binder blend. It is commonly held that wrappers impart up to 60% of a cigar’s flavor.

Blenders are responsible for creating “recipes,” or blends of these tobaccos. Think of them as executive chefs. Once a blend has been established and the tobacco for it sourced, it is ready for larger-scale production. Typically, teams of two (one buncher and one roller) work together to make cigars by hand.

The buncher is responsible for creating the longfiller bunch, and then rolling it in the binder. This produces what’s sometimes referred to as a “blank.” The blanks are put into molds, which are in turn stacked inside of a crank press. Over time, the cigars’ shape conforms to the mold, and a uniform desired shape is attained. Thereafter, the now-molded blanks are given to the roller, who applies the wrapper and cap.

Applying the cap is an art unto itself, with many different methods used. The highest-quality cigars usually stick with the Cuban tradition of a “triple cap,” which entails three circular pieces of tobacco at the head. The “pigtail” cap is another popular option, and also traces its roots to Cuba.

Cigars come in an inconceivably large number of shapes, as do the cigar terms used to describe them – but they all can be broken down into two basic categories:
• Parejos = straight-sided cigars (Corona, Rothschild, Robusto, Toro, Churchill, Presidente, etc.)
• Figurados = any irregularly-shaped cigar (Pyramide, Perfecto, Salomon, Diadema, Torpedo, Belicoso, etc.)

These cigar terms should be enough to get any smoker started. But when you encounter a term you’re unfamiliar with, don’t hesitate to ask what it means. Cigar smokers are generally a knowledgeable and friendly bunch, and welcome the opportunity to spread knowledge and love of the leaf.