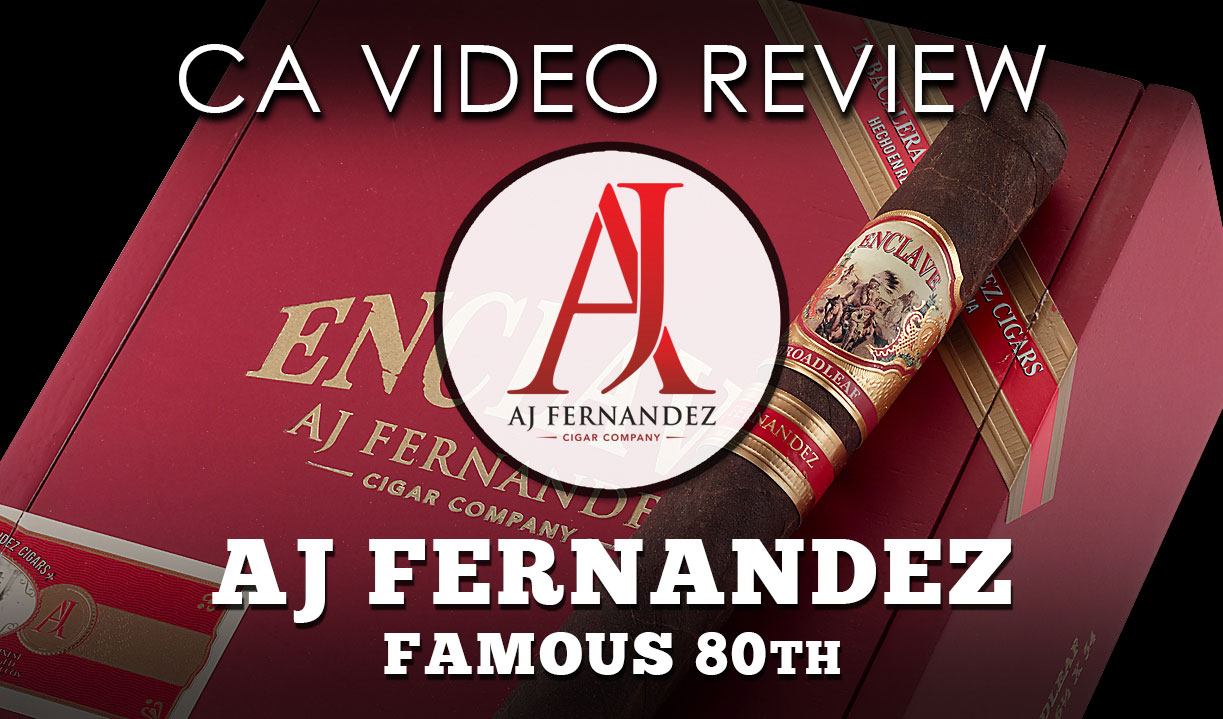 Since Famous Smoke Shop announced their 80th year in business, several top cigar manufacturers have had a hand in creating cigars exclusively for the occasion. In this instance, the credit goes to AJ Fernandez who made 3,000 Enclave Broadleaf Toros for the occasion.

One of AJ’s personal favorite cigars, and one that has received a number of high rating scores since its release, the AJ Fernandez Enclave Broadleaf Famous 80th differs from the main line in several ways. For one, the cigar is box-pressed, which the original Enclave line is not. Secondly, it’s a limited edition cigar rolled to just one size, a 6″ x 50 Toro. Finally, it features a gold band at the cigar’s foot that displays the words “Famous Smoke Shop 80th Anniversary.” 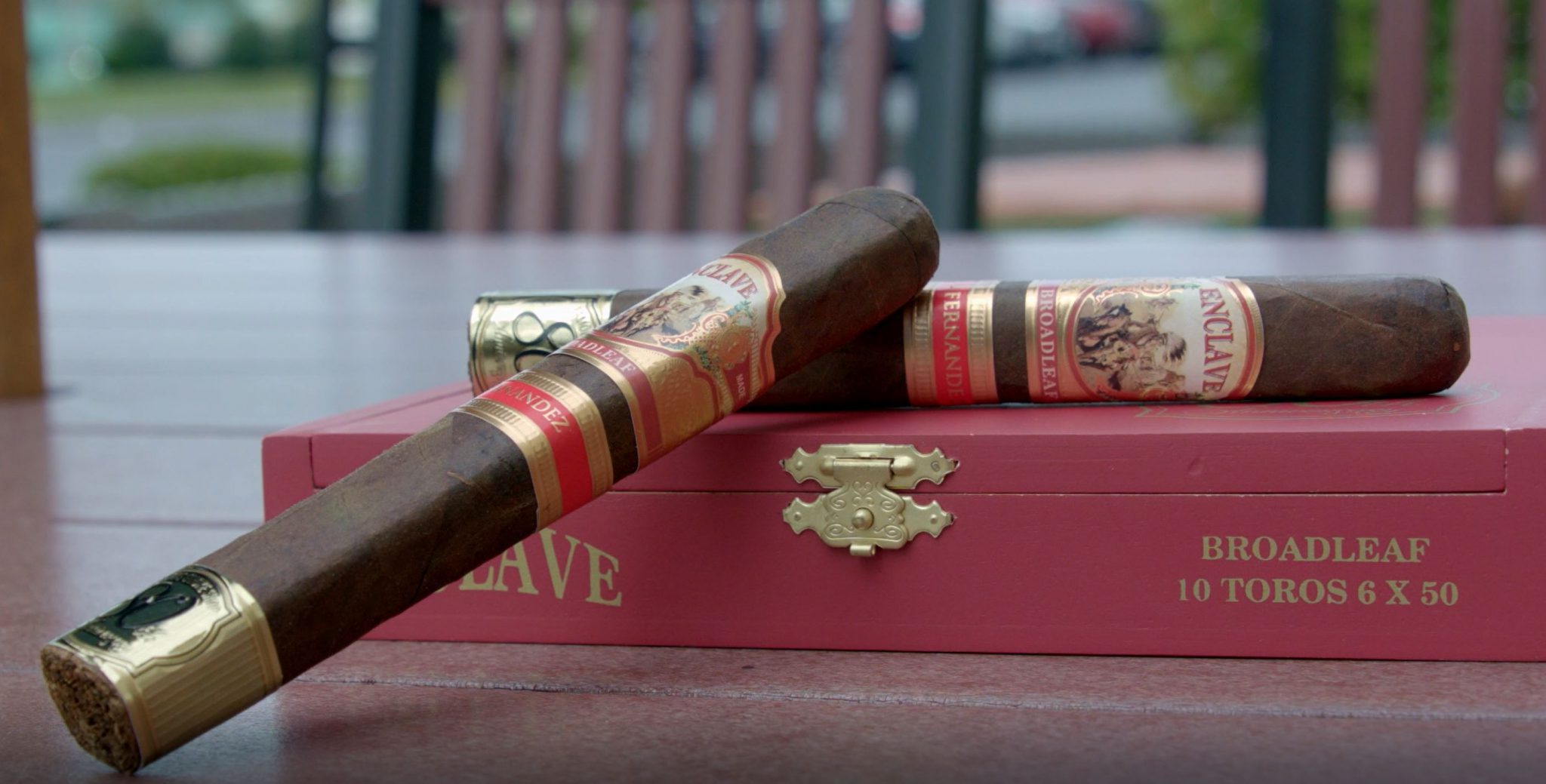 Using select Nicaraguan long-fillers for the filler and binder, the Enclave Broadleaf Famous 80th cigars boasts a dark, toothy Connecticut Broadleaf wrapper, and as AJ has said about the Enclave Broadleaf selection in past interviews, the blend “puts the emphasis on flavor and the smoking experience, itself.”

As noted in the press release, the spark for creating this anniversary cigar ensued from a conversation between Famous Smoke Shop CEO, Arthur Zaretsky, Purchasing Director Jim Charnley, and AJ, who were talking about the state of the cigar industry while visiting AJ’s factory in Estelí, Nicaragua. It was AJ who suggested making a special Enclave Broadleaf in a box-pressed Toro.

Presented in boxes of 10 cigars, only 300 boxes of AJ Fernandez Enclave Broadleaf Famous 80th cigars were produced for the occasion. Cigar smokers who have become loyal “AJF” followers – and there are plenty of them – know his penchant for making cigars that are consistently full-flavored, well-balanced, and skillfully made. So, for Famous Smoke Shop to have AJ make this cigar for their 80th Anniversary is more than just another treat for the true believers; it’s a rare opportunity to discover one of the world’s most prolific cigar makers.

Construction:  The Broadleaf wrapper had an attractive, milk-chocolate color, showed little or no veins, was even throughout, and had plenty of tooth. The rolling was virtually seamless with an excellent pressing and a triple seam cap. The cigar also had good weight to it and felt good in the hand.
Draw: Just right. Once lit, the draw offered plenty of dense, creamy smoke that continued throughout the entire length of the cigar.
Pre-light flavor: Leathery with some sweet tobacco.
Toasting & Light. The cigar lit well, with early notes of wood, pepper, and a slight floral note.
Base flavors: Earth, wood, sweet spice, light pepper.
Retrohale: Peppery in first act, then eases-off to a more floral character in second and third segments.
Aroma: Sharp with a floral and herbal quality.
Burn & Ash Quality: Superb. The cigar burned evenly exposing a very firm grey ash with some tiny, granular white spots that come from pockets of oil in the wrapper.
Balance of flavors: Excellent. More earth, wood, pepper.

Summary: As one of AJ’s favorite blends, reportedly, this cigar sports a very handsome appearance. The cigar began with some front-loaded pepper accompanied by notes of earth and wood. The pepper faded after the first inch where the smoke settled into a well-balanced mix of earth, wood, and a bit of sweet spice with a medium body. 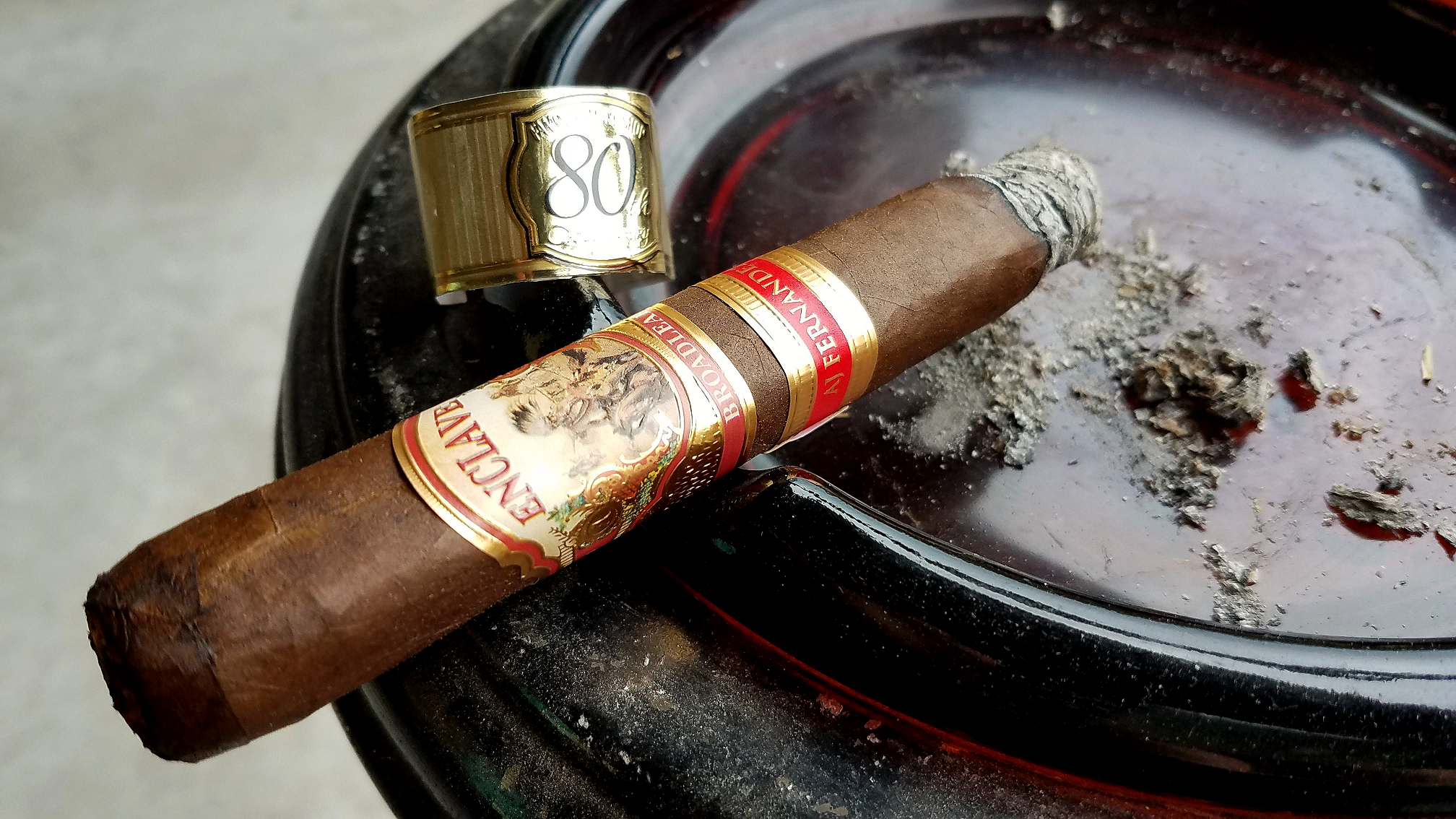 The second act was sweeter and a bit spicier, yet the earth and wood notes kept the mix anchored. As this juncture, the smoke was especially creamy. As to the finish, it was long and velvety on the palate with a mix of sweet spice and light pepper. I felt that this was the section where the Enclave performed best. Although I picked up only a few flavors, they were all balanced and well-defined.

Moving into the final act, the cigar revealed more spice, wood – mostly on the order of cedar – and maintained only a modicum of sweetness. Complexity-wise, the Enclave offers several change-ups between the spice and sweeter notes, but the woody elements were the most consistent for me.

Suffice it to say. . . The AJ Fernandez Enclave Broadleaf Famous 80th is bold enough to satisfy more experienced smokers who enjoy dark Nicaraguan tobacco. Yet when it comes to strength vs. body, this cigar never exceeds medium-plus in strength, while maintaining a body that is decidedly full. Best suited for the afternoon or evening with a fine red wine like a good Spanish Rioja. If you want to go the liquor route, I can see this pairing nicely with a sweeter añejo rum. All-in-all, a solid Nicaraguan smoke in the true AJ Fernandez tradition.

Construction: Slightly toothy, exceptionally smooth Broadleaf wrapper is a bit oily; body is firm and nicely box-pressed.
Draw: A bit tight.
Pre-light flavor: Sweet tobacco and earth; the foot has an earthy smell, too.
Toasting & Light: A somewhat mellow start; strong coffee taste, plus earth and a shot of pepper in the back of the throat.
Base flavors: Coffee, earth, sweetness, cedar.
Retrohale: Crisp pepper and wood; later, that pepper goes away and is replaced with a creamy sensation.
Aroma: Sweet and leathery.
Burn & Ash Quality: Grey ash shows the wrapper’s tooth; burns straight, and the ash holds well.
Balance of flavors: Very flavor-forward instead of strong, bordering complex.

Summary: You’re probably used to being told that Broadleaf is ugly…rough, rustic, and an all-around gnarly looking wrapper. That’s the first real surprise of the Enclave Broadleaf Famous 80th: it looks way more refined than most Maduros you may have seen.

The Enclave Broadleaf 80th opens (and stays) at medium strength, but the flavors are already hard at work: the most obvious is that “typical Nicaraguan” rich coffee sensation, backed by earth and pepper. Soon enough, the smoke sweetens up a bit with a dash of chocolate, cedar and a fruity sweetness that’s most noticeable in the nose. 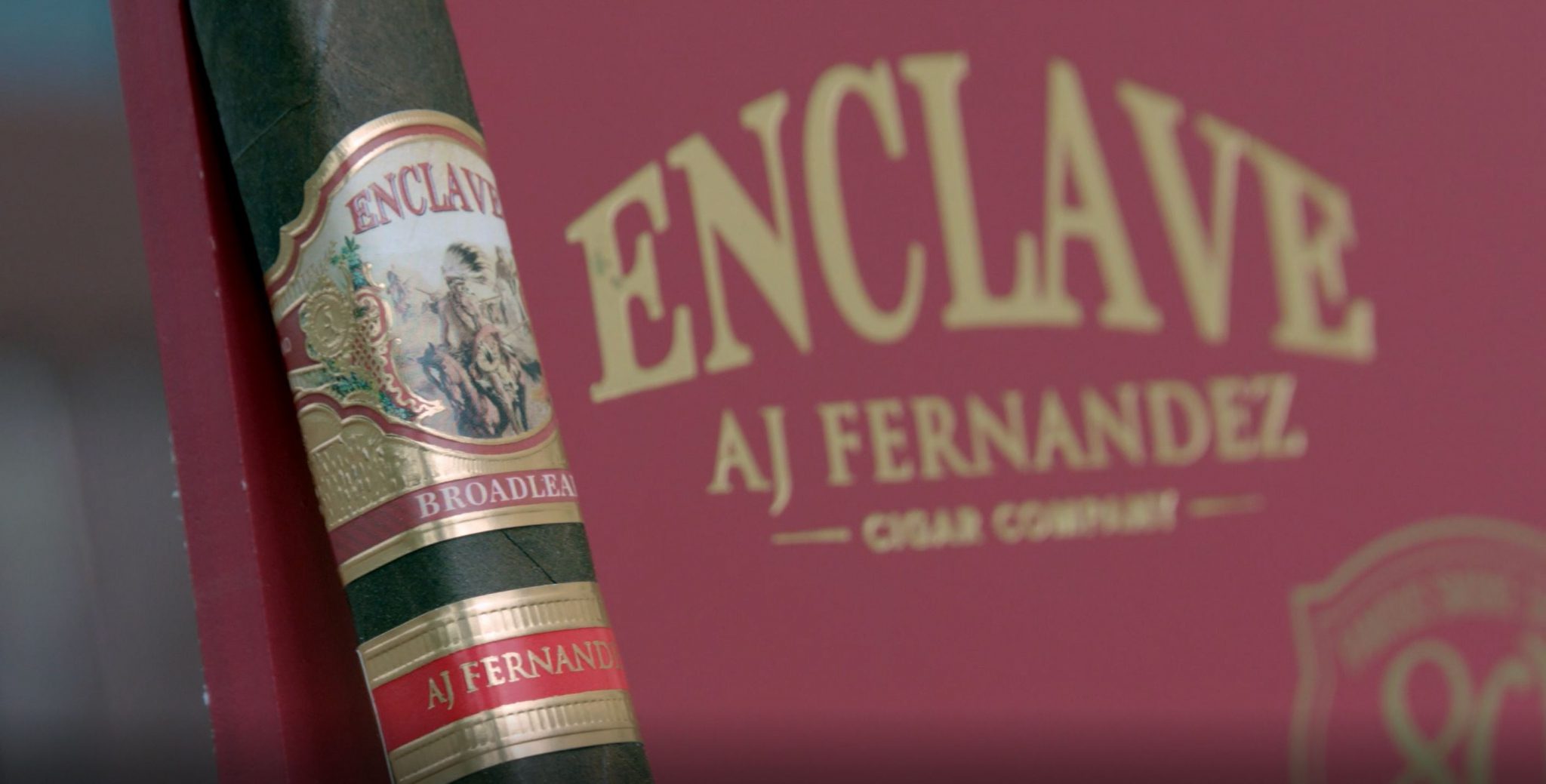 Smoke pours off the foot of this slow-burning Toro as it sits, and flavors turn a little leathery and bready by the halfway mark. That’s the sweet spot: the smoke gets full and velvety in body, bordering on savory with all that Broadleaf sweetness now front and center in the mix. The retro is also a significantly different experience than before.

It’s a bit of a shame these are so limited in supply – this box-pressed size makes for a really nice smoke, and is sure to appeal to those who like their Maduro experience on the sweeter side.

Summary: My initial dive into the Enclave Broadleaf Famous 80th by AJ Fernandez will be different from most. The new vitola and box-pressing will surely carry some differences, so let’s get down to the nitty gritty. 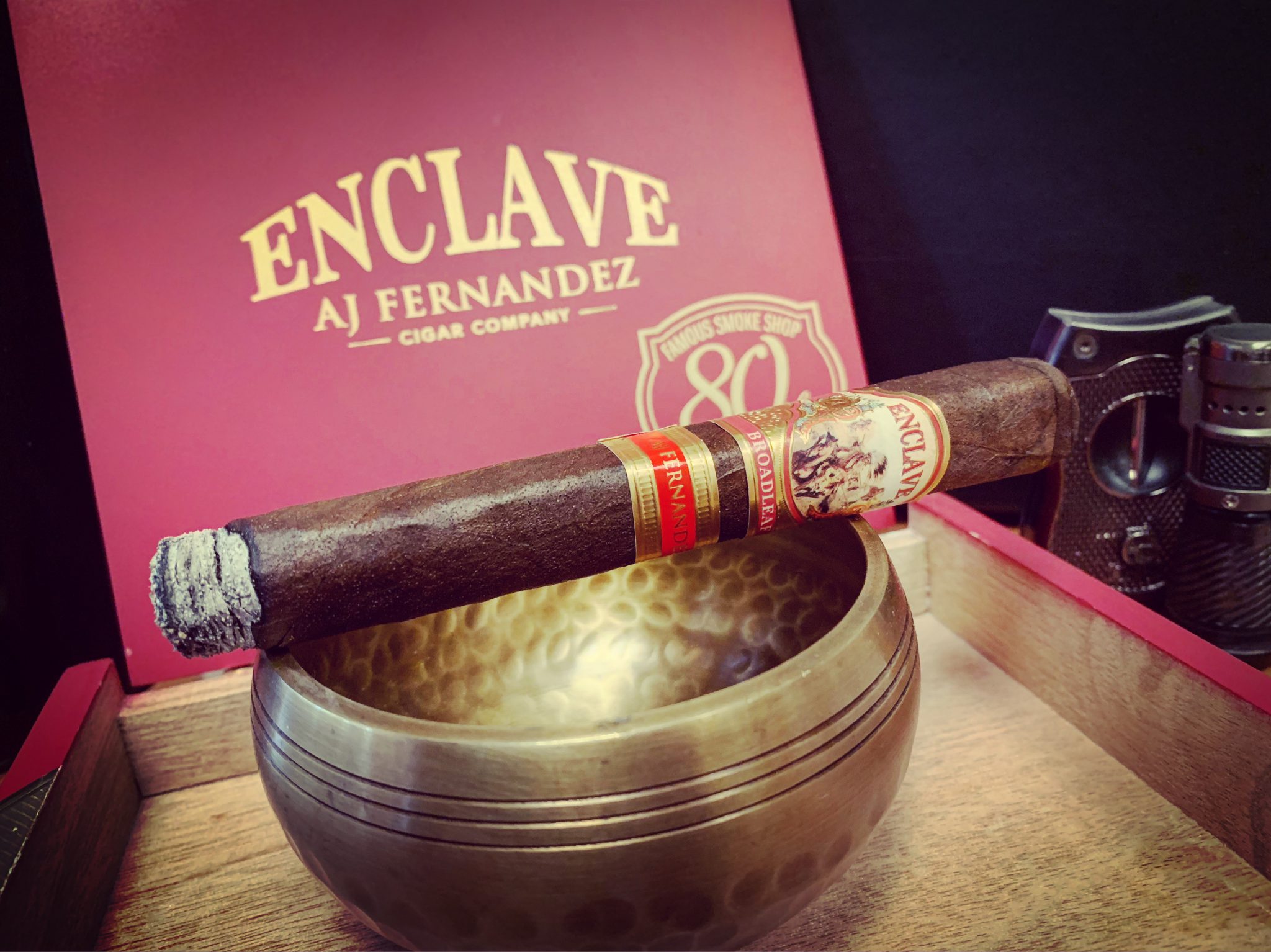 Beginning with the pre-light, I noticed some light echoes of a floral, fruity sweetness that progressed into a savory nuttiness once the cigar was lit. Up front, Enclave 80th was headstrong, peppery, and it fits AJ’s signature level of strength note for note…but not for long.

After burning through the first inch, the power tapered off and it settled in as a balanced smoke through the remainder of my session – an attribute that I loved. 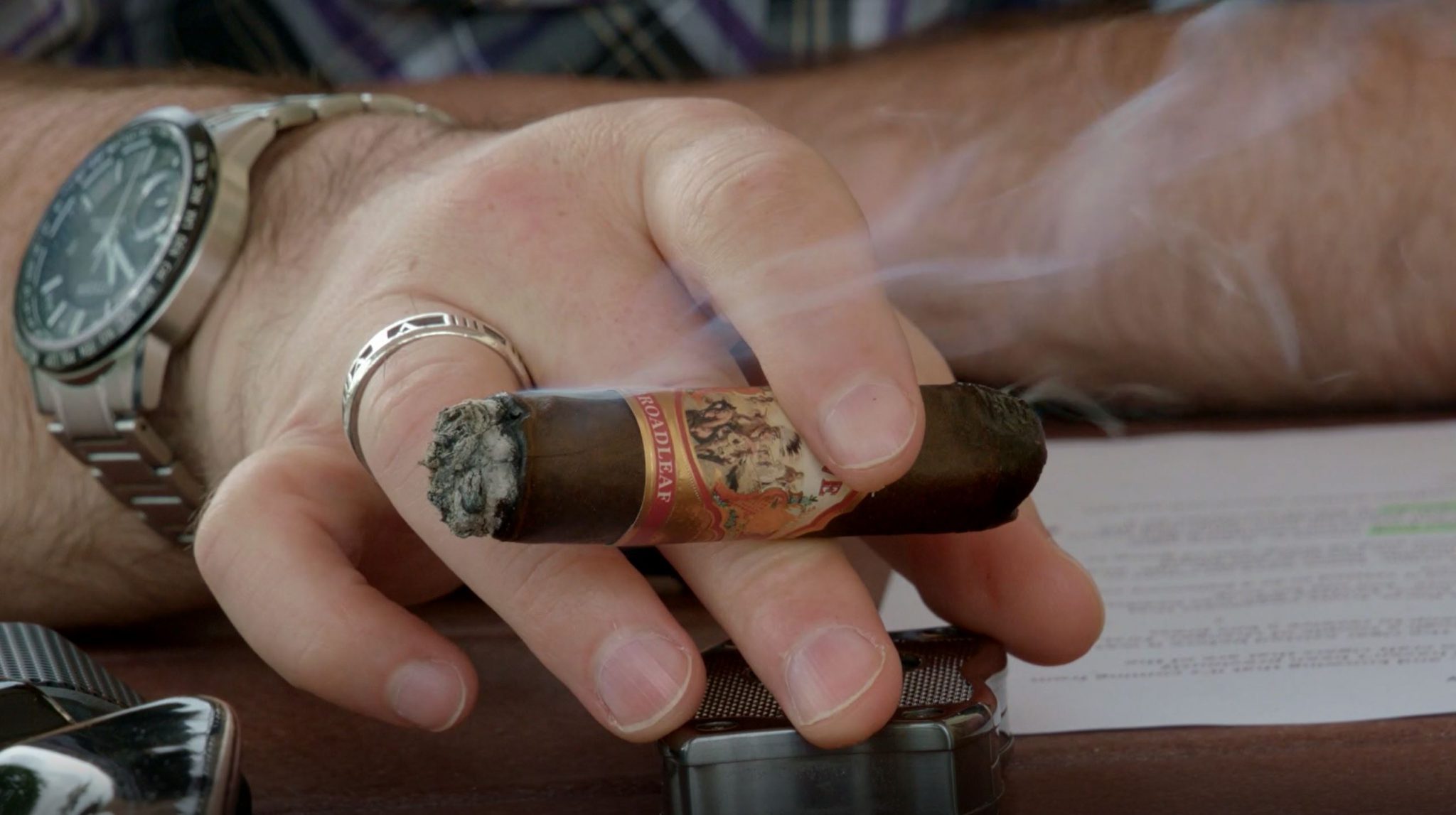 Fairly soon afterward, I noticed that the cigar was somewhat static. There were no crests or troughs, but it was a non-issue when I considered the flavor profile. Notes of coffee, salt, and bread kept pace along with a faint floral sweetness on the finish. To say that this blend exhibited a Cuban quality is an understatement, so if that’s your kind of thing, you’re going to be left satisfied. Fans of AJ will still feel at home, but the added benefit of a medium-bodied appeal will put this in many more hands. Yours should be one of them.

Reading Time: 7 minutes While we love the aroma of a good cigar, the smell can linger longer than we’d like…Get fresh with these Advisor tricks to take that smoky morning-after stink out of your holiday threads, if they still smell like last night’s Liga Privada.