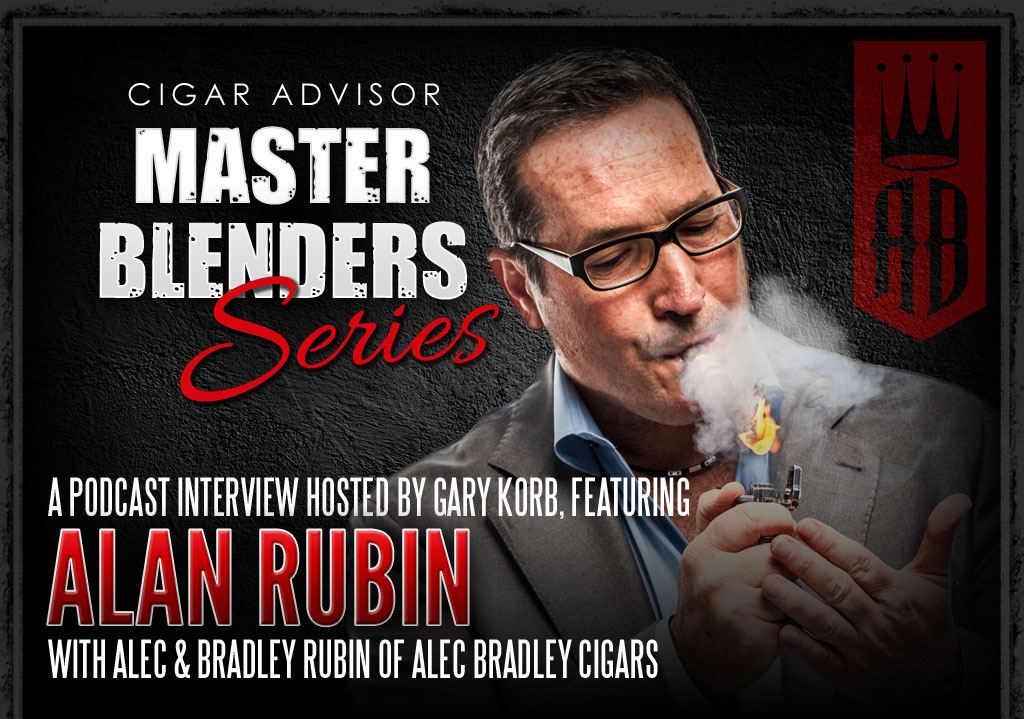 A FIRST for the Master Blenders podcast – Alan Rubin, joined by his sons, Alec and Bradley, speak about how Alec Bradley Cigars has made their mark in this crazy business. We also get into the leading cigars in the Alec Bradley stable, how Alec and Bradley are contributing to their father’s business, the new Alec Bradley Black Market Estelí and Prensado Lost Art cigars, and much more. Whether you’re already an Alec Bradley disciple, or just incredibly curious about this highly-rated boutique brand, give it a listen.

It began in 1998 with an exchange of business cards between Alan Rubin and Ralph Montero. The Cigar Boom was over. Alan was trying to hold together a fledgling cigar business. Ralph had left his gig at Tropical Tobacco to go out on his own. Both businessmen were hungry, but it would be two more years until Alan and Ralph partnered-up.

Enter, the Millennium. Alan and Ralph needed good cigars to sell. Henke Kelner, owner of the Occidental Factory in the Dominican Republic and blender for Davidoff Cigars needed some production jobs. Ralph knew Henke well and suggested to Alan that they “give it a shot.” So, with a $60K deficit and $3,000 in the bank, they pulled the trigger. The result was a high-quality cigar at an affordable price – Occidental Reserve cigars. Sold in bundles, the shot hit the bullseye giving Alec Bradley Cigars the momentum it needed, including hundreds more customers and the ability to erase its debt.

Without Occidental, Alec Bradley Cigars might be nothing more than a vague memory in the minds of a few cigar smokers. But now they had a cigar that would keep the lights on and let the company move forward.

Trilogy, a triangular shaped cigar came next. It was gimmicky, but it was also top-flight. Next came the not so gimmicky MAXX. The attraction for The MAXX was its wide ring gauges, which had become a growing trend.

Yet, it was the Alec Bradley Tempus cigars selection that shined the big klieg light on the company. They had received their first big hit, scoring a ’94’ in both Cigar Insider and Aficionado for the Tempus Centuria in 2008, and last year the Centuria reprised its ’94’ rating, landing it the #5 spot in the “Top 25 Cigars of 2017.”

Recently, Alec Bradley Cigars ushered-in the next generation of cigar marketers – Alec and Bradley Rubin – Alan’s sons and the namesakes of the company. They are working with the Alec Bradley team and sharing the company’s goals: ‘To give cigar smokers an unforgettable experience and make their lives better one hour at a time.’

And the beat goes on.

Listen to the Podcast here:

Read More
Cigar Buying Guides
Don't get burned - if you're in the market for a good cigar lighter, this one is a must-read. Get an up-close look at the 5 best cigar lighters to serve-up the holy trinity of consumer confidence: Quality, Reliability, and Value.
Read More

2018 CA Report: Inside the Oval Office – Presidents Who Smoked Cigars