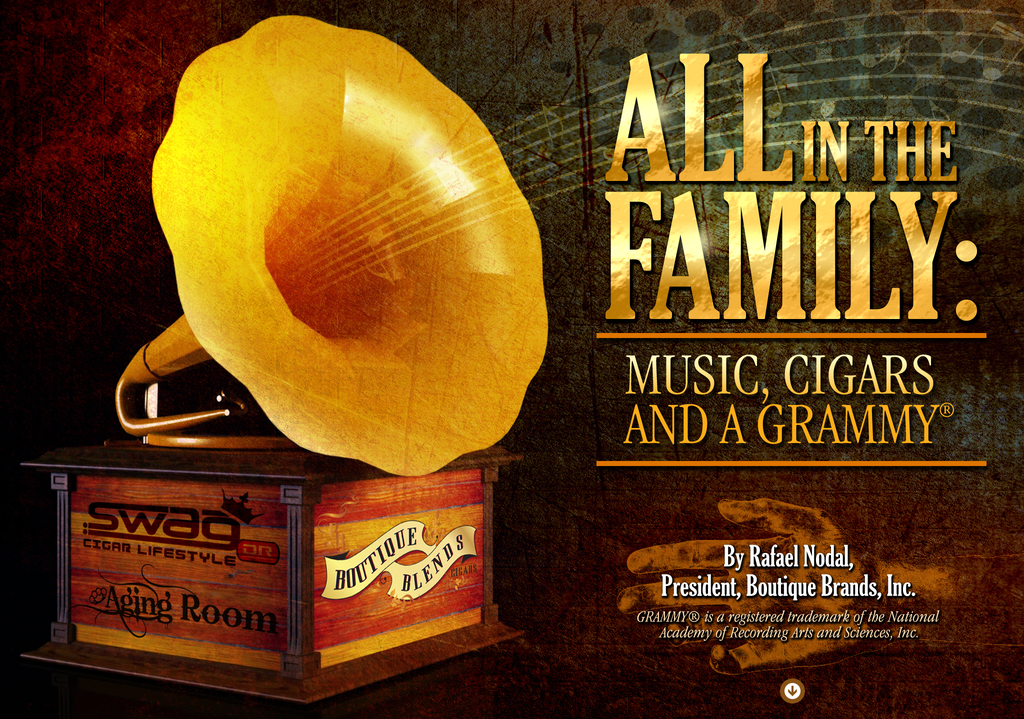 All in the family: Music, Cigars, and a Grammy

It was Wednesday Decemeber 5, 2012. I had just arrived home from the office, late as always. I had been traveling for a few weeks, and the week before I had cut my trip to New York short because I had become a grandfather. My stepson Marco’s son was born a week early on November 29, and he was named Miles, in honor of Miles Davis. As his name suggests, in our family, music rules. Cigars too, but music was my first passion, and one that continues in the family.

This Wednesday was a regular night, like any other. My wife, Alina, had come home from visiting our grandson, but since I had so much paperwork to do, I decided to work late and just look at the new pictures of Miles that my wife had surely taken. After eating a Cuban sandwich in the backyard by the pool with a Presidente beer, I lit up an Aging Room Small Batch M356 Presto and poured myself a little Barcelo Extra Anejo Dominican Rum. Due to its complexity, great aroma, and medium to full body, the cigar was perfect with the extra-aged Rum. The weather was perfect; 75 degrees and a little windy. I could not help thinking of how lucky I was being able to smoke one of my cigars in the backyard in December. Immediately I thought of my good freinds and customers in the northeast and how difficult it is for them to smoke in December in the backyard.

Yes I am lucky; not for being able to smoke a cigar outside in December, but for having a great family and the oppurtunity to live in America. I wish I had the oppurtunity to continue with my first passion, music, but sometimes God works in mysterious ways. When you are an immigrant, sometimes the choices are limited, but at least I was lucky enough to work in the business of my second passion, cigars. Padron me, for I digress…..

With the cigar in one hand, and the glass of rum in the other, I started looking at the new pictures of Miles. Wow, he was growing by the minute, and sure enough, he was going to be a musician-cigar maker, My stepson Marco swears that when Miles listened to Michael Jackson he smiled and moved his hand. Miles was six days old and already he could identify with the early music of Michael Jackson. No pressure at all for Miles, right?

While looking at his pictures, my wife received a call from Marco. He had just been nominated for a Grammy Award as the producer of one of the songs on Lupe Fiasco’s Rap album, The Great American Rap Album PT.1. This being his fourth nomination, Rap music fans know Marco by his professional name: “INFAMOUS.” He received three nominations and won a Grammy in 2009 for producing Lil’ Wayne’s Rap Album of the Year: “Mr. Carter.”

Yes, I was lucky. Our new project of Boutique Blends Cigars was doing great, with the new addition of the Aging Room Small Batch F55 Quattro, a box-pressed cigar with a 2003 Sumatra wrapper, the new Swag Sobe (South Beach) Edition, and now, even music in the family was successful!

As I mentioned in my last column, I had studied violin since I was six years old in Cuba, and later, in New York City, I studied a little piano to help with my composition classes and my music direction classes. I originally wanted to play the drums (like any other six year old), but in a Communist country, you weren’t even free to play the instrument you wanted. So violin it was. As a result, I studied classical music.

When I met my wife Alina, Marco was a DJ, and it was hard for me to understand his passion for this new type of music. I remember the many lively discussions we had about whether or not a turntable is or is not a musical instrument. We still have many discussions, although now they are about politics and the economy. Where we don’t differ is, the love for his mother, the love of music, and the love for Miles.

Alina was always very supportive about Marco’s musical career, maybe more so than I. When Marco finished high school, he decided not to attend college so he could fully dedicate himself to the music. He had already received a number of international awards as a DJ, but avoiding college was not the way to go in my view. However, Marco was always dedicated to music and knew exactly what he wanted. I remember when he was 16, I took him to his first job as a DJ at a skating arena. It was Saturday and he was supposed to start at 1:00 pm. So, I dropped him outside the arena around 12:30. It took a few minutes just to unload all of the vinyl records, mixers and other equipment (his instruments). Two hours later, he called and asked me to pick him up because he quit. They wanted him to play Disco and other music, but in his words “I’m not going to compromise my art.”

On the way home I said to him, “Sometimes you have to compromise in life and do things at the beginning that you may not want to do.” But Marco would not have it any other way. For him, there was no compromising. This was his one and only regular job; 30 minutes was all he could take.

I like to think that Marco has learned something from me, as I have learned from him. The passion that he has for music is the same passion I have for the cigar, and the “no compromise” attitude is the same way I feel about the quality of my cigars. I had already compromised once; in my younger days, when I stayed in Miami to be with my family and gave up an audition to The Julliard School of Music in New York City.

Music has always been part of my life. Playing the piano and composing a musical piece is how I got my wife to notice me when we worked together. I think I sealed the deal when I played the violin for her by the beach, as a Valentine’s Day gift, because I had no money to buy her a gift.

This night was no exception. Along with the rum and the Aging Room Cigar, I was celebrating the new Grammy Nomination.

As I sat there enjoying my rum and cigar, I thought about my first Grammy experience in 2009. In addition to being an unbelievable experience for a musician and for having our son nominated, the idea for our SWAG cigar line was also born there. Marco and his girlfriend Jennifer were staying at the Beverly Wilshire Hotel, where many of the famous Grammy participants stayed. Alina and I were staying in another hotel with the “regular people.” But this was no regular experience. Alina was dressed for the occasion by Arturo, a Cuban designer for Miami. I hired a stretch limo to pick up Marco and Jennifer at the hotel and take them to the Staples Center. Marco, being a low-key person, did not want to enter the ceremonies on the red carpet, so we did what any proud parents would do: we dropped them off at the back entrance, and with Marco’s passes, Alina and I walked the red carpet with all the celebrities. I could imagine what the paparazzi were thinking, “Who the hell is this guy with the big cigar in his mouth?”

The show itself was incredible. Although Marco did not win two of his nominations, winning as part of the Best Rap Album with Lil Wayne’s “Tha Carter III,” was a milestone in his career, Many people in the music business will give anything for one Grammy nomination, but three nominations and one Grammy- priceless! His work was also nominated as Album of the Year, but that Grammy went to “Raising Sand” by Robert Plant and Alison Krauss.

The list of performers was also pretty unbelievable. I saw, among others, U2, Kid Rock, Stevie Wonder, Paul McCartney, who was also nominated for Album of the Year, and a new singer who won the Best Record of the Year, Adele. Yes, it was a night to remember, but the best was yet to come at the famous after-party, not to mention the after-after-parties. The offical after party was held next to Staples Center. The performers were also first rate, including girls who were flying above us half-naked, like something out of Cirque du Solei, over big pools of water.

“You need a cigar with more Swag.”

The idea for my Swag Puro Dominicano was born at one of these parties. As I was passing around my Oliveros King Havano cigars, Lil’ Wayne told me that I needed “a cigar with more Swag.” That’s how the new all-Dominican leaf blend I had been working on was born. Instead of the standard, classic cigar box design that we were working on, we opted for a much hipper packaging. The Swag Puro Dominicano was the first introduction of the project we now call Boutique Blends.

Marco and his girlfriend went to sleep early, yet Alina and I stayed up and participated in as many after-after parties we could. My personal favorite was a Jazz after-party where only the best jazz and blues musicians were performing; among them was B.B. King. Being a fan, that was pretty incredible.

I didn’t plan an attending the Grammy Ceremonies this year. I had an incredibly busy traveling schedule, promoting our new cigar releases. Plus, I thought I’d have to stay home and take care of Miles while Marco went to the Awards show. Instead, he stayed home with his girlfriend and Miles and watched the Grammys on TV. So, we did what any parents would do: attend the Grammy Awards and went to as many after parties as we could.

I figured that maybe a new idea for the next Boutique Brands blend would also be born there.