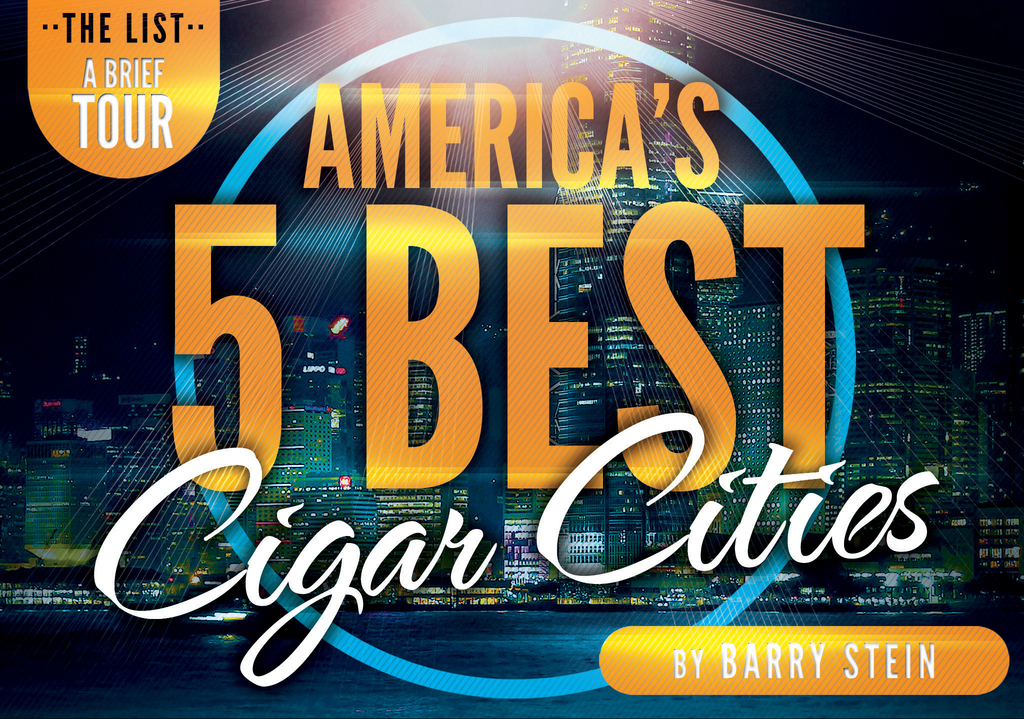 One thing almost universally accepted about cigars is that they’re the great equalizer; they allow people from different backgrounds, beliefs, and social standing to come together without labels or judgment. As a matter of fact, many of my friends and professional contacts have been made during the time I’ve spent in cigar lounges around the globe. I remember being in a lounge in Israel smoking with a group consisting of both Israelis and Palestinians, where political differences were forgotten, and the laughter was raucous. I reflect on that experience quite often.

Having spent so much time on the road, I’m often asked where my favorite place was to smoke, and what was the best cigar city…but to answer that would be unfair, because (to paraphrase an old friend), ‘the best place to smoke, is the place that you enjoy the most.’ True. However, this doesn’t prevent me from sharing my opinion

When I moved from New York City to Miami in early 2012, I expected my new hometown to be the epicenter of the cigar world. What hit me was a bit of a culture shock. While at any given time you could run into the power players of the cigar industry, Miami doesn’t have the same vibe as other cities I’ve visited. There is more of a sense of tradition here, which seems to go against the grain of the part of America that has embraced the boutique brands. Humidors seem to lack the diversity found in some of my favorite cities, and the majority of smokers seem to have more brand loyalty than in other places I have visited.

There are no places in Europe that would make my list. The smoking bans that are in place stateside are also in place in a lot of European cities. During a recent jaunt to Switzerland I was looking forward to visiting Davidoff of Geneva, but was disappointed to find that you couldn’t smoke inside – which quickly put a damper on things. And while Cuban cigars are often looked at as “The Holy Grail” of cigars, they just lack the consistency and quality for which they were once so coveted. I often found myself looking forward to my return home and enjoying my comfort sticks made in Nicaragua or the Dominican Republic.

The Swiss Federal Assembly began enforcing a law in May 2010 prohibiting smoking in enclosed, publicly-accessible areas. There are a few exceptions for bars and restaurants – where smoking is only permitted in separate, ventilated rooms or in establishments smaller than 80 square meters (861 square feet). More than half of Switzerland’s 27 cantons have imposed even stricter laws, which don’t allow for those smaller rooms. In September 2012, Swiss voters turned down a rigorous ban on smoking in all enclosed public places via national referendum..

New York: I lived there for 42 years. I know this place like the back of my hand. But what makes New York really stand out is that it truly is the “city that never sleeps.” There are a handful of shops that you can find open at 1:00 in the morning for a cigar; and despite draconian tobacco laws, you can smoke in a lounge, but not at the beach or a park. If events are your thing, there is one almost weekly within an hour’s drive of the city. And because of the importance of the location there is always a manufacturer present with a company rep.

Philadelphia: having no tobacco tax once made this city a haven for a cigar smoker from New York, which had a 75% OTP tax. It’s also been the home of some super stores with incredible staffs. The city itself adds to the mystique, since the historic districts allow you to take a stroll down the street as our forefathers did while enjoying a cigar.

OTP stands for “Other Tobacco Products”…but beyond that, it’s up to each state to define what products, exactly, fall under that definition (such as cigars, pipe tobacco, snuff, etc.). New York sets theirs as 75% of wholesale price.

Atlanta: This city is home to a lot of great restaurants, and a few even have smoking lounges. Add to the fact that if you enjoy being in a gentleman’s club, you can smoke inside as you enjoy the “talent” on stage. And lastly, it is home to a club called Prohibition where you need to know the password to get through the door. Once inside, you’ve stepped into the past with a bar that you can smoke in. This alone is enough to put Atlanta on the map.

Washington DC: I’ll spare you any Monica Lewinsky jokes, as the greater DC area is home to one of the oldest shops in America, as well as home to the yearly “Little Puff” event which takes place on the rooftop of a steakhouse overlooking the Capitol. The recently-opened Civil Lounge also makes this city a true haven for any cigar connoisseur.

At the center of the scandal? Rumor has it, a Gurkha Grand Reserve.

Chattanooga: Rounding out my list is a city that is known for its choo-choo. But what scores its place on my Top-5 list is Burns Tobacconist, which has two iconic shops located within the city limits. What makes it stand out is the fact that at a Chattanooga Lookouts baseball game (the AA affiliate of the Los Angeles Dodgers), you can watch the action from right field and smoke a cigar.

Upset that your city did not make my list? Take consolation in knowing that it hurt me deeply to leave off more than a handful. But as I said earlier, the best cigar city is the one in which you enjoy your cigars the most.

Read More
Cigar Humidification
The travel humidor - rugged, airtight, watertight, and built to last. But can they survive the stress test our Cigar Advisors devised? We put three of the top travel humidors to the Drop Zone test in 5, 15, and 30 count sizes; Does carnage ensue? Or will these cases pass the test? Watch NOW and see what happens!
Read More