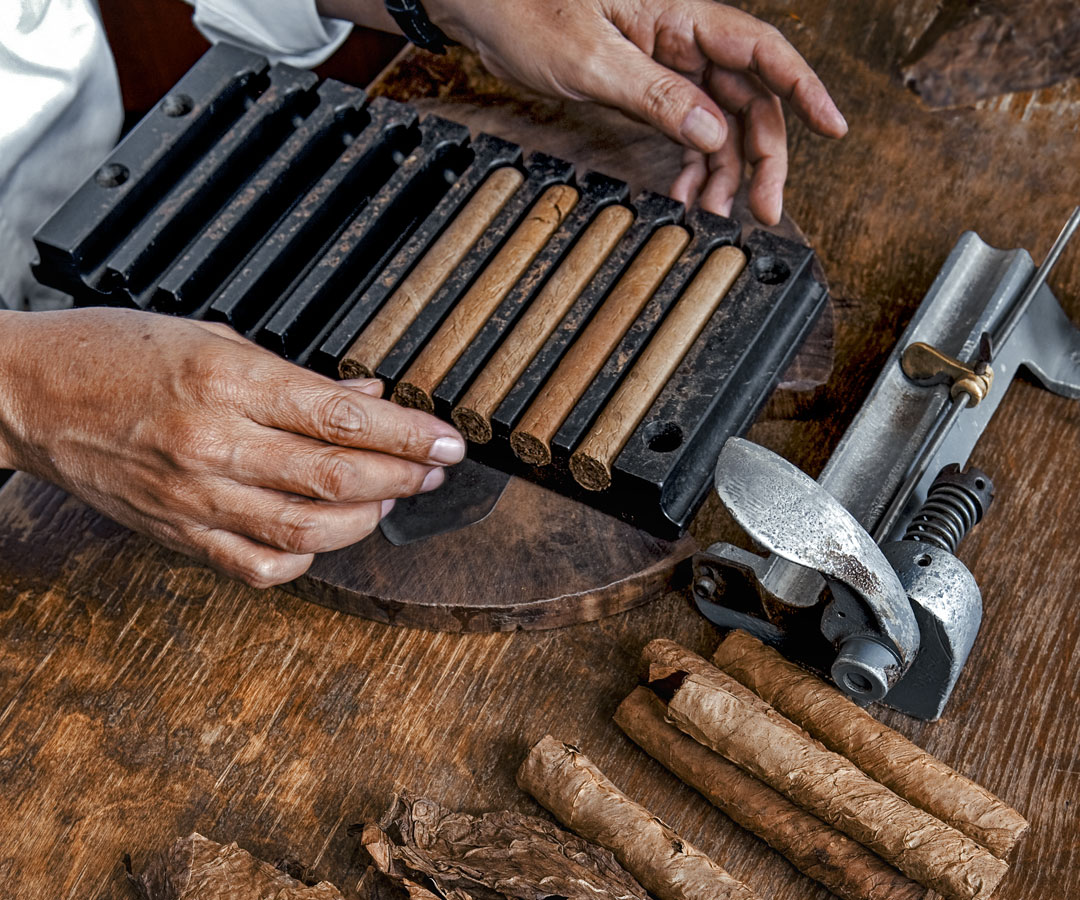 After taking the cigar world by storm several years ago with the introduction of two unprecedented “firsts” for premium cigars, Sam Leccia has struck out on his own with a new line of cigars produced and distributed through his new, aptly-named Sam Leccia Cigar Company.

Gary Korb: What was the first cigar you ever smoked, and what do you remember most about it?

Sam Leccia:. I actually remember my first cigar quite well. I was in 10th grade. Me and my two buddies, Vince and Tom, pitched-in and bought a box of Phillies blunts. I can remember opening that box when we got home. I had cigar boxes around the house with baseball cards and matchbox cars in them; this was the first one that I had with actual cigars in it. We were so pumped to smoke them. Then we got into other cigars, like hand-rolled cigars. I remember my first hand rolled. It was a Macanudo and I spent $6.00 on it, which on a 15 year-old’s budget was insane, but I felt like I was on top of the world smoking it. I used to always go into the cigar store at the local mall just to enjoy the aromas of the walk-in humidor. I was hooked. The funny thing is, growing up my Dad always insisted that I didn’t smoke or drink, and yet my career has been both in the liquor and now tobacco industry. Sorry Dad.

GK: How did you decide on the name “Debut” for your first release?

Sam: Names are not easy to come up with, and usually are more important to the company using it rather than everyone else. I gave a lot of thought to various names. Some I will probably use down the road, but this is my first solo release, so what better than Debut?

GK: Where is your company and factory based?

Sam: My company is based in Pittsburgh, Pa, still out of my garage, but the factory that’s making Debut is in Honduras.

GK: Can you give us some background about the tobaccos used in Debut blend and how you developed it; for instance, when you knew it was ready, etc.?

Sam: I am excited about the blend. It’s the most fun of the entire process. The blend consists of tobaccos from Honduras, Nicaragua, Ecuador and Santo Domingo. The wrapper ages well and the oils really rise to the surface after some aging. I love a good oily wrapper, and this truly delivers beyond my expectations. As far as ‘when I knew it was ready,’ just like finding your soul mate, you know when you know.

GK: Why did you decide to go with 60 gauge ring sizes for two of the three Debut frontmarks?

Sam: Well it’s no secret that I like a 60 ring. I wanted to put my twist on traditional sizes. I didn’t want to come up with some new name for a size, I like the length of both the Robusto and Churchill, I just gave them more tobacco. Though, the figurado is a traditional 6 ½ X 52 Torpedo.

Sam: I enjoy Facebook and Twitter. I have reconnected with so many people: old Navy buddies, school friends, and I can stay in touch with people I meet in my travels. I don’t really build a strategy around using Facebook or Twitter, rather, I just use it like everyone else does to update my friends on my life. It just so happens my life is cigars, so it turns into to some form of marketing, but that’s not truly why I use it.

GK: The cigars that brought you to prominence were true “firsts.” Does the Sam Leccia Cigar Company have plans for producing something just as unique in the future?

Sam: You know, I look at things differently now. I am different. I am a nonconformist by nature. I like to try new things and have fun. The goal is to just bring some excitement to an industry that I am excited about being in. I could easily make traditional blends in traditional sizes but that’s just not who I am. I honor tradition by creating new cigars. I have lots up my sleeve.

GK: Since going rogue, what has been the most surprising thing that has happened?

Sam: Your question makes me sound like some kind of Sarah Palin (laughs),
but the answer is, I enjoy the freedom. It’s liberating.

GK: What do cigar smokers seem to misunderstand about you?

Sam: I can probably write a book based on this question alone. Some people expect me to be a 6-foot 6-inch hard-ass, but I’m a soft spoken, 5-foot 7-inch regular Joe. I’m a creative thinker and I’m kind and generous. I certainly don’t think of myself as any sort of ‘celebrity.’ I say this all the time but, I have no paparazzi on my lawn; no one bothers me in grocery stores or the mall; and I highly doubt anyone tells Kid Rock that he “looks like Sam Leccia”. I’m as real as it gets and I enjoy meeting and hanging out with the cigar smoking nation.

GK: Will you be introducing Debut at the upcoming IPCPR show in Las Vegas this summer and doing other major cigar events?

Sam: I am currently taking pre-orders and plan to start shipping before the show. I’m in kind of a difficult situation, as my first run looks to have already been pre-sold. I know that sounds like a good thing, but I want to meet the demand without sacrificing quality. I will be at the IPCPR, and I can’t wait to hit the road and reconnect with all of my cigar smoking friends.

GK: I heard that you are not using a traditional wood box for your cigars. How will they be packaged?

Sam: I am using a box made from thick chipboard. It is made from 100% recycled materials and manufactured here in the USA. I don’t profess to be ‘green’ but I can sleep better at night knowing that I am not responsible for one tree cut down in the rain forest to make my boxes. Central America’s rain forests are being depleted; I am proud not to have a hand in that. I’m very excited about the boxes; they look amazing and I hope others follow suit.

GK: If you could compare yours cigars to one of your favorite bands, which would it be, and why?

Sam: Wow. That’s a tough question. I love music to no end – I am an amateur singer and lyricist, but to compare what I do to any of the music and bands that I love, I just can’t do it.

I just can’t wait for this! Sam’s creations have always been my favorites to smoke, and I doubt this will be any different.

I met him a few years ago at a Cain event. Really great guy. His new smoke should be a good one.

Hi Steve. Agreed. Just a few minutes ago, I was telling someone how Sam rolled this really neat cigar with a design in the band out of different colored tobaccos. There’s a photo of it somewhere on CigarAdvisor.com I hope he’s doing OK, too.