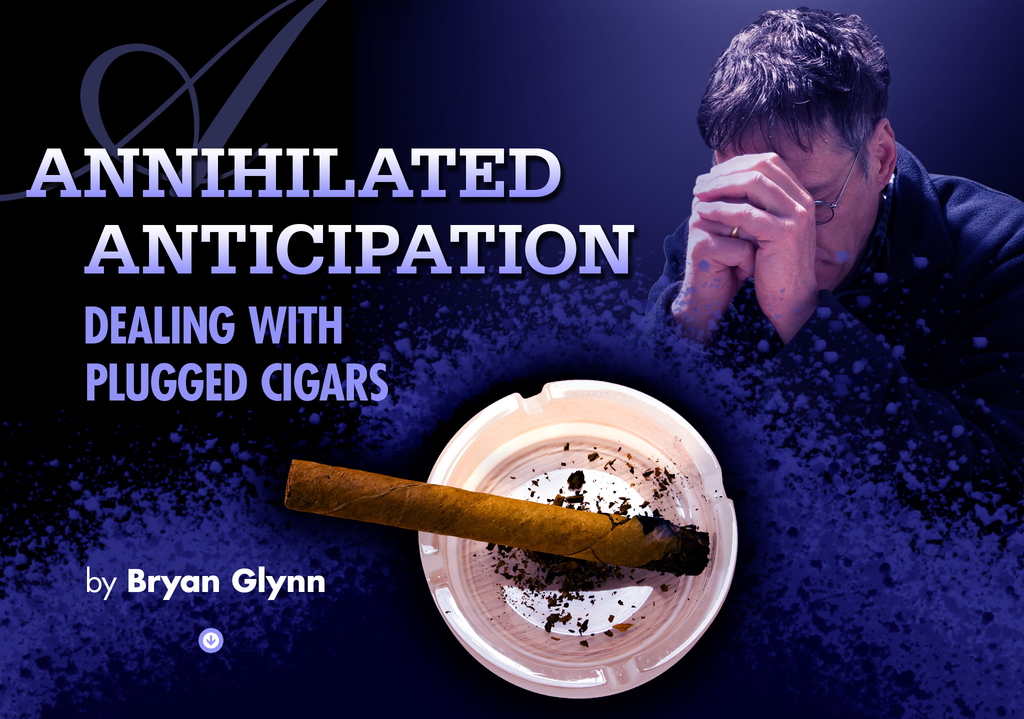 We’ve all been there: you reach into your humidor and carefully extract the prized stick you’ve been saving for just this occasion. It looks as sexy as it did when you first laid it down -even better, maybe, its now-sepia cellophane concealing a delicate coat of plume.

Sniffing the wrapper and the foot, you carefully slice off the cap. Your mouth is practically watering. Before toasting it, you attempt a cold draw: nothing. To your horror, the draw is excessively tight, or worse, totally plugged.

Putting flame to foot only confirms your suspicions: it’s like sucking the proverbial golf ball through the garden hose. You grunt white-knuckled frustration; with equal parts disgust and resignation, you assume your best Al Bundy pose and prepare to sling it 50 yards downfield.

Before pitching your prized puro, let’s see if we can’t resuscitate it. We’ll investigate the causes of plugged cigars, and uncover some tried-and-true steps for restoring your cigar (and the moment).

A WORD ON COMPLICATED SIMPLICITY

When it comes right down to it, cigars are just rolled up leaves. That sweet simplicity is complicated by factors like how that tobacco is cured and fermented, how and when it’s rolled, how the cigars are stored, and how they are smoked. Obviously some of these variables are beyond our control, but understanding their role equation of a good smoke will help us achieve a more consistent and enjoyable smoking experience.

If tobacco has not been properly or fully fermented, it can release tar once it’s fired up. As the tar builds up, it plugs the air gaps between the leaves. This can lead to an increasingly tight draw, often coupled with an uneven burn and a “crispy” cherry at the cigar’s burning foot. Often, the cigar goes out all together; even if it doesn’t, the tar will build up at the head of the cigar.

If you’ve had experience with it, you’re keenly aware of how vile tar is-a bitter, viscous liquid whose exceedingly disgusting flavor is nearly impossible to remove from the lips, tongue, or skin.

Unfortunately, there’s no magic solution here. Once rolled, it is impossible to appreciably alter tobacco, and no amount of home aging will properly ferment the tobaccos. You can try to ‘purge’ the cigar by blowing fairly forcefully back through it, rather than drawing the smoke into your mouth. This can help dislodge some of the buildup, but there’s no guarantee of success.

If the taste is good and the draw tolerable, try dabbing the head of the cigar with a tissue or paper towel to remove the tar. However, this is a truly case where you may have no recourse but to chuck it.

Premium cigars are physically rolled by hand, and therefore subject to human error. If the roller fails to form the bunch (the interior longfiller leaves) evenly along its length, it can create a knot. Similarly, if the rollers’ hands aren’t perfectly synchronized-think “rolling a snake with clay”-the leaves form a twist. Though uncommon, the overall pack of the roll can also be too tight.

If you suspect a knot or twist is impeding the flow of air, try gently rolling the cigar between your thumb and forefinger. If you’re lucky, you’ll locate a knot or twist, and gently loosen it. The patient among us may simply choose to endure a poor draw until the burn to get past the blockage, especially if the imperfection is toward the foot.

This is also where a draw poker can come in handy. This commonly-sold implement is more or less an ice pick that is driven through the center of the cigar lengthwise, thereby creating an unobstructed air channel. It won’t help in every case-if it’s rolled too tightly, for example, the wrapper may end up splitting-but you literally have nothing to lose by trying.

The downside is that this can lead to tunneling, where the center of the cigar burns faster than the outside, producing an inverted cone-shaped cherry and leaving wrapper leaf unburned. Still, you’d probably rather touch up a good cigar than toss the whole thing.

If an ounce of prevention is worth a pound of cure, then the most effective solution is undertaken weeks before the cigar is ever smoked. More on that below…

Torpedoes, belicosos, and perfectos are all beautiful vitolas, but you’ll occasionally get one that’s excessively tight at its taper. This is simply human error; rolling a shaped head is 100% a manual process, and flawlessly rolling hundreds daily is no mean feat. Should you find that your figurado has a tight draw, try cutting the head a little further back. You can cut down as far as where the cap meets the wrapper; any further, and the cigar will start unraveling. Gently rolling the head of the cigar between your fingers might also help.

Humidity is probably the most culpable in all of this. Over-humidified cigars swell up with moisture, restricting their airflow. Ever hears that old 70/70 guideline for degrees and RH? It’s just that: a guideline. Cigars can withstand considerably lower temperatures and humidities. Indeed, some thrive in them.

If you encounter plugged cigars frequently, consider lowering your humidor’s RH. Even a difference of 2% RH can result in a better draw, so go with your gut. This is especially true if you favor fuller-bodied fare, whose tobaccos tend to contain more oils. Generally, the stronger the cigar, the lower the ideal RH. Take stock: if your inventory skews toward strong, don’t be afraid of 65% (or even 62%) RH.

Additionally, some opt to “dry box” their cigars by putting them in an un-humidified cigar box for a day or two before smoking. The net effect is basically the same.

No Rest for the Weary

If you are getting plugs from mail order cigars, try giving them a couple weeks in a proper humidor to re-acclimate them before trying to smoke them. Often mailed cigars are over humidified to keep them fresh on their journey, and it’s always a safer bet to let them settle.

This is the easiest variable to control. A relaxed smoking pace yields benefits beyond heightened appreciation and a sweeter flavor, especially for full-bodied smokes. When you smoke too fast, you unleash bitter tars and oils which foul the cigar’s taste and restrict the draw. With the draw now tighter, you’ll smoke even harder-a vicious cycle the ends with your unfinished cigar in the ashtray.

For some, the preceding sounds like so much esoteric rambling. For others, it’s basic knowledge. Either way, I hope you learned something. Like most hobbies, cigars are as complicated as you want to make them. Now armed against the evils of plugged cigars, you are a stogie ninja. Go forth and herf!

The advice to lower my humidity was spot on. Addtionally I have used a dry box AND after cutting and checking the dry draw will also put inot a dry box. At that point Ive nothing to loose but a day or two adry and if im lucky i saved a good cigar.

Damn,I was looking for the magic cure. Can’t imagine many more frustrating things then having that dream cigar be plugged,and I’ve had my share

Growing up in the Detroit Metro area, Bryan studied commercial aviation before settling in IT, working in the automotive engineering industry for GM and major suppliers until moving to FL in 1999 to switch careers. Becoming a full time wedding and commercial photographer in 2007 opening BG Pictures, Bryan quickly merged passions of photography and cigars by moving in to the cigar photography scene producing ads, banners, booths, web and fine art for a variety of manufacturers and shops. He started Cigar Obsession to further his passion for the enjoyment of fine cigars and help others get the most out the fine hobby with unbiased, professional information and reviews.

Reading Time: 7 minutes What does Hecho a Mano mean? And just WTF is Vitola and Gorda all about? Learn 11 Spanish cigar terms that will help you understand the lingo used on the box of your favorite cigars…