Arturo Fuente Don Carlos cigars are among my list of personal Fuente favorites, and I’m glad to bring you my Arturo Fuente Don Carlos cigar review. I call this line “the original Fuente Fuente OpusX cigars,” because just as the latter were created by Don Carlos “Carlito” Jr., this selection was created a generation earlier by Don Carlos Sr., himself. Coincidentally, both cigars took years to create and are rolled with only the most select estate-grown Dominican tobaccos. From the very beginning, the filler leaves used for the Don Carlos line have always been aged for as long as 10 years, which accounts for their abundance of rich flavor and remarkable smoothness.

Rolled in flawless, genuine African Cameroon wrappers, unlike Fuente’s mainline series with gold, red and green colored bands, Fuente Don Carlos cigars feature the gold, red and black bands. I mention this only because there is often confusion among some cigar smokers about which band colors represent the different Fuente selections. The black bands generally represent the more up-market blends in the Fuente stable.

The cap comes off clean with a cold draw that’s distinctively cedary with a hint of grassiness. The cigars toast and light fairly quickly offering plenty of thick, creamy smoke dominated by woody flavors. The cigar doesn’t come on strong with a peppery bang, either. Rather, the smoke starts off somewhat mild with a pleasant cedar flavor and aroma.

The burn is razor sharp exposing a firm and almost solid grey ash that, if you’re careful enough, will hang on for a very long time. Even when tapped-off, the next ash simply repeats the trick.

When retrohaled, the smoke is very smooth, woody, and devoid of any harsh pepper flavor. Speaking of flavor, the Fuente Don Carlos is one of the best examples of consistency. Unlike Carlito’s peppery, full-bodied and complex OpusX cigars, his Dad’s cigars are more straightforward in flavor and strength as they make their way toward a medium-full smoke with predominant flavors of sweet cedar and nutmeg laced with some delicate spicy notes.

Another excellent attribute of the Don Carlos cigars is their aroma. Though none of the tobacco used is grown in Cuba, these cigar have a very authentic Cuban bouquet. How they do it I guess is their secret, but I don’t care.

As the ash makes its way past the first inch, the cedar flavor turns much sweeter, both on the palate and in olfactory senses. Flavors of nutmeg, sweet spice and a modicum of pepper show up more prominently in the last third.

Some Arturo Fuente Don Carlos cigars tend to vary in sweetness. This is the only “inconsistency” I’ve noticed in these cigars over the years. However, they are extremely consistent in terms of their quality, appearance and 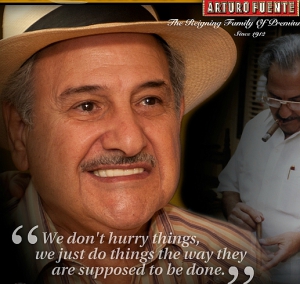 overall flavor. This is not a complex cigar that keeps you guessing as to where it’s going next. The flavors are so satisfying, it’s nice to know that what you taste is what you get from end-to-end.

Arturo Fuente Don Carlos cigars are true luxury cigars that don’t look like luxury cigars. They don’t have fancy bands, but they do come in lacquered boxes with attractive routing around the base which gives them a little swag. Singles start at around $8.10 for the #4 (Petite Corona) and go as high as $283.99 a box for the #2 (Torpedo), so they’re certainly priced at the luxury level.

That said, these classic cigars belong on every cigar smokers “must-smoke” list. For one, they are made in very limited edition, so they are often hard to find in stock. Second, and more importantly, they have a unique flavor and aroma that must be experienced first-hand to fully appreciate. I hope you enjoyed my Arturo Fuente Don Carlos cigar review, and I hope that you’ll give these terrific cigars a try and enjoy them as much as I do!

Filler:  Dominican aged up to 10 years

Binder:  Dominican aged up to 10 years

Always the best cigar for the money.

I have enjoyed both the Belicoso and #2 for many years but over the past 6 months I feel the flavor and aroma especially of the Beliciso has really declined. So much so that once I finish the 2 boxes of each that are in my humidor I doubt I will buy any more. And Don Carlos was the only cigar I smoked regularly except for an occasional Cuban Montecrisro #4. Has anyone else noted a falling off in quality of the Beliciso or #2 or both?

FDA Cigar Legislation: How The FDA Took My Stogies Away