It all started on October 20, 2011, with a simple request from LTC Larry Dugan to Robert DeSousa, who is a LTC in the PA Army National Guard and also serves as state director for U.S. Senator Pat Toomey. The Battalion Commander’s Nittany-6 (from Pennsylvania) had just in arrived in Iraq for their tour of duty.

“Any chance of hooking us up w/ some cigars and a humidor? The unit we’re replacing isn’t really into the social cigar smoking thing, but our HHQ (SB) is–it’d help the Command relationship and overall mission I’m sure…”

Hate to bother you. This is a PA unit. 135 guys. They just arrived in Iraq. They will be the last unit there. Do you send cigars to troops? 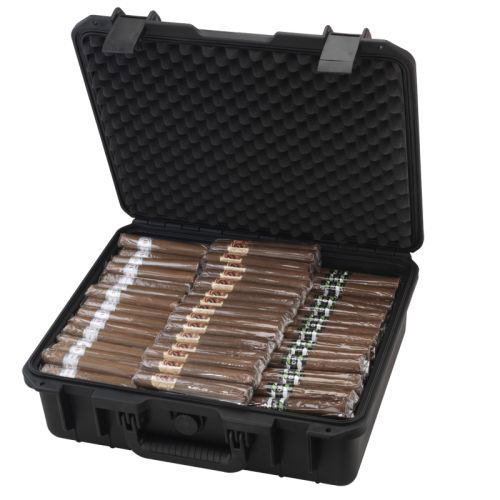 Arthur replied, saying he’d be happy to oblige and forwarded the message on to the Customer Service Manager, Cory Reinhard. Mr. Reinhard, who has done this on many occasions for U.S. troops, set the wheels in motion. Once everyone was in the loop, the following package was prepared and shipped out within 24 hours:

50 CAO OSA Sol cigars, 50 La Gloria Artesanos Retro cigars, 35 Vegas Cubanas cigars by Don Pepin, all neatly packed in a Perdomo 80 cigar travel case. That’s quite an impressive stash. At least one topflight cigar for every soldier in the unit, plus a humidor that can take plenty of punishment and keep all those cigars fresh under the harsh conditions of Iraq’s climate and desert (see photo).

As noted above, sending cigars to the troops is nothing new to Famous Smoke Shop. We’ve been doing it since the war in Iraq started, and have also sent cigars to U.S. troops stationed in Afghanistan. The call center has even had phone-in orders where customers ordered extra cigars to be sent to the troops. Additionally, there is a group of local retail store customers who annually collect cigars for the troops and ship them out during the Christmas holidays.

“I’m proud to be able to support our troops by providing them with our products and giving them a little piece of home,” said Mr. Reinhard. “They are serving and protecting us and our country. Being able to assist them is the least we can do.”

In the war zone there is very little that acan compete with a nice cigar at the end of the day! This si an awesome project!

In the war zone there is very little that acan compete with a nice cigar at the end of the day! This si an awesome project!

A great opportunity to send a gesture of appreciation for thanks to our troops. Cigar Geeks.com has accumulated over 500 cigars from members slated for the troops over the holidays!

A great opportunity to send a gesture of appreciation for thanks to our troops. Cigar Geeks.com has accumulated over 500 cigars from members slated for the troops over the holidays!

Read More
Cigar Ratings & Reviews
Just off the boat from Nicaragua, Trinidad Esteli cigars are here - and the Advisor Review Panel has smoked it and recorded their critiques. Our expectations were pretty high for this full-bodied blend...but the question is, did the new Trinidad Estelí live up to them? Find out by clicking NOW to watch our review!
Read More

FDA Regulation: The End of Cigars