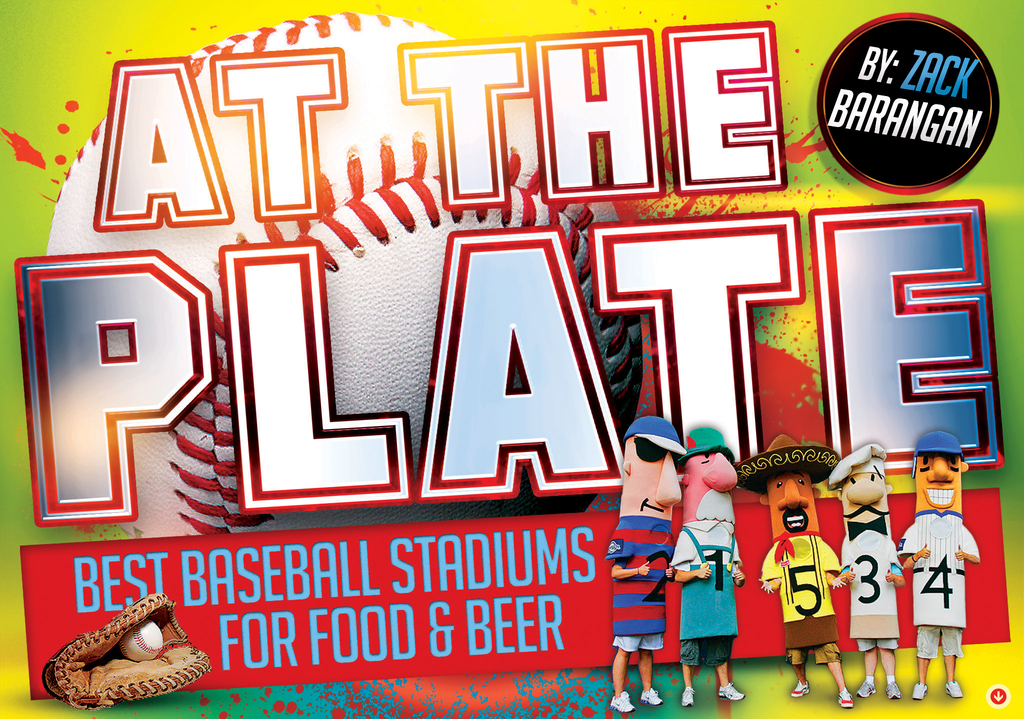 One of the most legendary road trips for anyone to experience is a grand tour of America’s great baseball stadiums. Baseball, the national pastime, is revered amongst sports enthusiasts and travel buffs alike. The great stadiums of Major League Baseball are more than just places for folks to take in the games, they are shrines to the game itself. But nowadays, stadiums have taken on another premium feature: the food and drink experience. Parks are now offering gourmet food made by some of the best chefs in America as well as artisanal beers that any homebrewer would gush over. The days of dirty water hot dogs and Bud Lights are long gone. If you are a foodie and would like to experience the best food and drink experience baseball has to offer, then get ready to make some travel plans.

Though the Mets may be a long-suffering franchise, their park is one of the premier destinations for baseball-loving foodies. If you love burgers, the park features one of New York’s most revered burger joints: Shake Shack. We recommend their signature Shack Stack, a rich burger that features a cheesy mushroom garnish. If that’s not your thing, you can eat lobster rolls made by James Beard winner, chef Dave Pasternack or dine on smoked ribs from Blue Smoke. Wash it all down with a selection of over 60 brews, including local brews like Blue Point, Brooklyn Ale and Ommegang. Our favorites include Abita Purple Haze and Shock Top, two fruity brews that are perfect for a summer’s day.

If you’re in the food business – winning an award from the James Beard Foundation is akin to a rock star winning a Grammy. Score a nod, and chances are you’ll want to wear your Award medal to bed. See, James Beard was like the original foodie – he was a chef, and wrote a ton of food books. He was also the godfather of American cuisine, bringing higher-end French cooking to the American dining experience in the 1950s and allowing the US to make a mark on the gourmet food biz that even makes bacon jealous. The James Beard Awards honor “outstanding names in the food and beverage industry” – we’re talking the big names you see on TV, like the Emerils, Martha Stewarts and Andrew Zimmerns of the world – so the fact that you can enjoy this caliber of food at a ballpark while you’re rocking a Mets jersey and screaming at the other team’s left fielder is a serious deal. 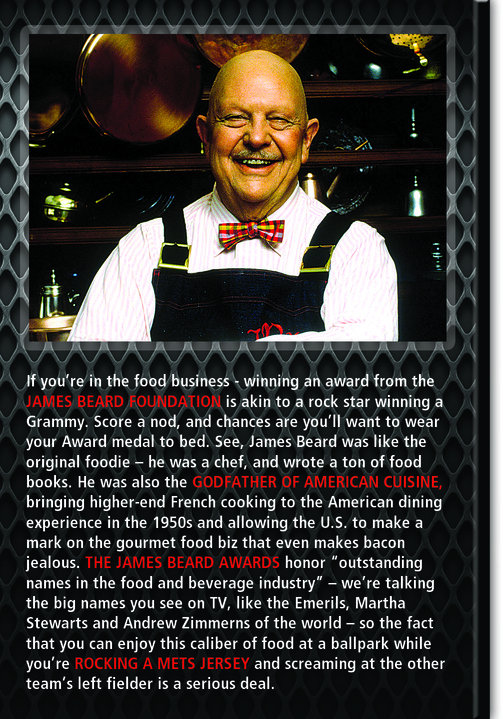 Picture a stadium with the flair and flavor of the city of Miami. That’s exactly what Marlins Park offers. Based in the Little Havana neighborhood, the park is one of the league’s newest and flashiest. The menu at the stadium reflects the flamboyant culture of the city around it. Culinary services at Marlins Park are directed by Executive Chef Jim Abbey of Levy Restaurants, the same team behind the U.S. Open tennis tournament’s delicious menu. The park features a vast array of foods for the tastes of every fan. Like the city’s colorful clubs and fashion scene, the stadium’s food is a mix of international and local flavors. The crowning achievement is the Sobe hot dog, a twist on the classic ballpark offering that features a mango coleslaw and chipotle mayo. Fish tacos and Cuban sandwiches round out the rest of the fantastic food options. To kick back with a few brews, head over to the Clevelander, a spinoff of one of Miami’s most famous nightlife hotspots.

You don’t have to be in Miami to score a good one, because here’s how to make a “Cubano” – or Cuban sandwich…”three” and “thin” are all you need to know:

Slice the bread so you have 2 open faces (but still connected), and lay in some mustard. Add your ingredients, brush a little soft butter on the outside of the bread, and throw it in a Cuban press. No press? Toss it in a hot skillet and put something heavy on top of it. Cook until the cheese melts and the bread is slightly hard. Eat. Oh yeah.

There are a ton of variations on the Cuban Sandwich, but most in the know say no mayo, tomatoes, onions, lettuce or peppers. FYI – it’s the pork that makes the sandwich, so don’t scrimp on the pig. And serve it fresh – those “deli cuts” with an expiration date a decade from now aren’t up to your Cubano. Play it right, brother. 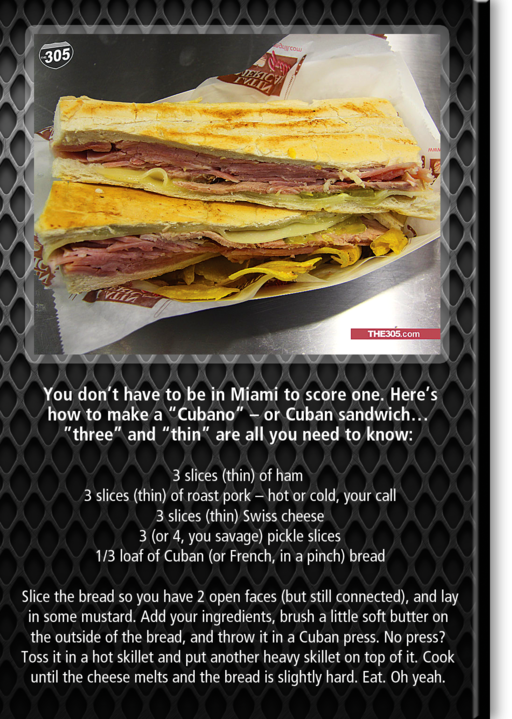 Made famous by the Iron Man Cal Ripken, Camden Yards is one of the most venerable locations in the league. The park is credited with being one of the first stadiums to incorporate local fare into its menu. Today, the park continues this tradition. Executive Chef Josh Distenfeld, formerly of Harrah’s Las Vegas Hotel and Casino, has certainly brought a distinct Maryland flavor to Oriole Park. The All-Star Café is a marketplace in the middle of the stadium that features a rotating menu of cooked-to-order meals. Boog’s BBQ’s pit beef sandwich with raw onions and secret sauce is a highlight of the All-Star Market. But since it is Baltimore, our favorite item on the menu would be the Crab Mac and Cheese Dog from Stuggy’s, combining the best that Charm City and baseball have to offer. Not content with just offering some of the best local meals in town, Camden also offers a slew of craft beers that delight customers. Beers by Baltimore’s Heavy Seas Brewery and Frederick’s Flying Dog feature very heavily in the rotation.

This isn’t your run-of-the-mill stadium. Miller Park is a behemoth of a stadium befitting of the great city of Milwaukee. The parking lot fits up to 12,500 cars, which means a heck of a lot of tailgating is going on before, during and after games. But inside, it’s all about the sausage. This is, of course, the home of the famous Racing Sausages, a race of sausage mascots held at the bottom of the sixth inning of every Brewers game. Every kind imaginable is available at the park from chorizo, kielbasa, and bratwurst to your every day bacon-wrapped dog. But it doesn’t stop there. The “Miller” in Miller Park means that the stadium features some truly fantastic beers. Leinenkugel’s 1888 Bock is a favorite, as is Glarus Brewing Company’s Spotted Cow ale. Beer geeks and foodies will have a ball (pun intended) at Miller Park. 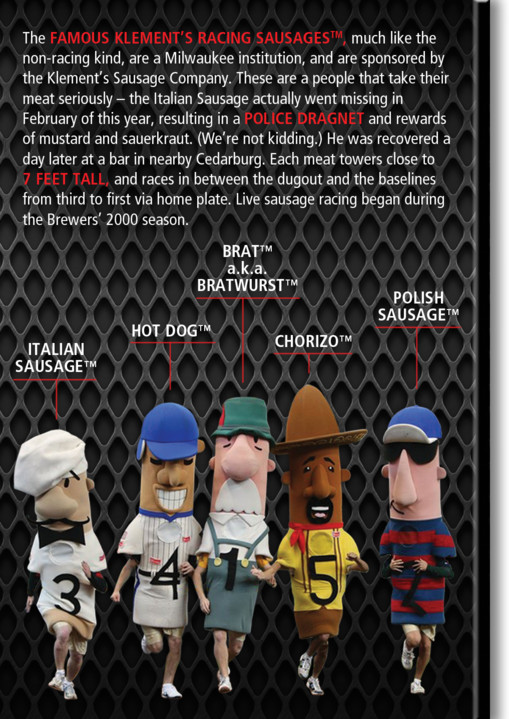 The MANual: Nuts and Bolts of the Hardware Store