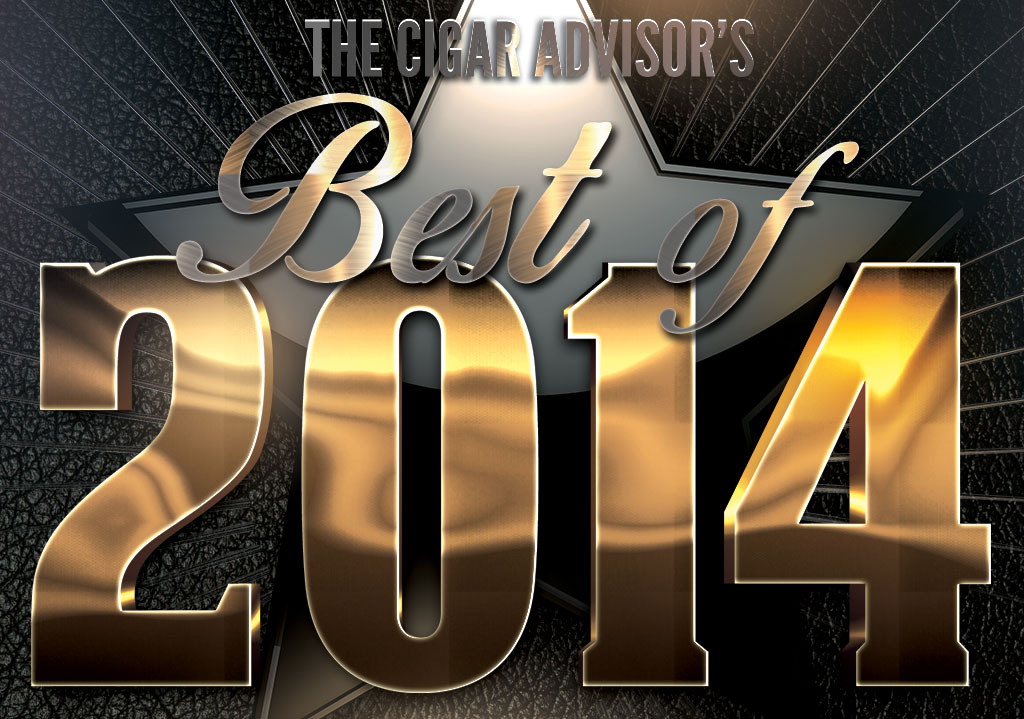 By The Editors of CigarAdvisor.com

Ed. Note: The end of a year inevitably means a look back at the highlights of what made those 12 previous months so great. But what about the year before that? Sure, our 2015 list looked markedly different (and focused primarily on “new” cigars), but we though it would be a good time to set the wayback machine for TWO years in the past and to see where our taste buds landed us – and what we picked for our favorite cigars we smoked that year. Take a look – I’ll bet you’ll find many have become humidor staples. ~ John

As the sun begins to set on 2014, the cigar bloggers and cigar websites are announcing their best cigars of the year. Here, in the underground bunker at CigarAdvisor.com, we editors have been poring over our top picks for the last few weeks. Each editor chose his top three cigars. Some are new discoveries, some are perennial favorites, and some may surprise you. So, without further adieu, here are our picks for the best cigars of the year.

Although I enjoyed many of the new cigars that were released in 2014 (a number of which are mentioned in this article by my CigarAdvisor comrades), this year I decided to go with some tried & true cigars that have consistently satisfied me year-in and year-out.

Perdomo2 Ltd. Edition 2008 Robusto
A perennial staple in my humidor, this medium-full, all-Nicaraguan blend never ceases to amaze me. I like the way the dark Habano wrapper (the maduro is almost black, and is equally, if not more, delicious) gleams against the bright band, and the quality of the box pressing. Flavor-wise, the smoke is smooth, creamy, earthy, and delectably sweet. I tend to nub these down the bone 90% of the time. They stand up well to a relight and stay true to the very end.

Avo XO Robusto
Another cigar that’s become a trusted friend is the Avo XO Robusto. As for the quality of this classic, medium-bodied cigar, it doesn’t get much better. The blend consists of six different tobaccos rolled in a silky Ecuadorian Connecticut wrapper for a complex smoke that’s especially creamy with notes of sweet cedar, coffee bean, nutmeg, and other toasty-nutty flavors. Add the marvelous aroma, and you’ve got that Avo “cigars in perfect harmony” thing going-on.

Rocky Patel Sun Grown Robusto
This full-flavored cigar is one that I discovered early, but got into later. Among the loads of “sun grown” cigars on the market from which to choose, the Rocky Patel Sun Grown has remained high on my “go to” list for its perfect balance of 7-year-aged Dominican/Nicaraguan long-fillers and 5-year-aged Ecuadorian wrapper. The smoke is rich, creamy, and aromatic with a satisfying sweetness complemented by hints of pepper & spice that sneak in and out during the trip.

Taking a quick look back over the cigars I really enjoyed in 2014, I can sum it up in one word: “full.” If you asked my wife, it might be “stink,” though I would prefer “aromatic” if we’re going to have that argument again. But I’d be happy to stink up my clothes with these three cigars, as it serves to remind me that I can chomp on each of these gems for well under $10 a stick. One is new, 2 are not; but they’re new to me and I smoked them in 2014, and that’s what gets them on my list.

San Cristobal Clasico
Yes, I know San Cristobal has been around for a little while…but 2014 was my first time. I’ve never been a huge fan of spicy cigars; but if you’re looking for full body with “just-enough” of that Pepin touch, it’s time you and San Cristobal were introduced. Ashton provides the all-Nicaraguan base, a full-yet-smooth concoction that left me trying to describe a lush experience with words that just don’t exist for cigars. An Ashton product that delivers the goods, starting ata very respectable $6.50 per stick for the Corona? No brainer.

Partagas Black Label
Or as I call it, “the uber.” Partagas Black Label is the full package: flavor beyond legal boundaries, sweet, sweet aroma and a Connecticut wrapper so oily it should come with a Valvoline sticker on it. Starting at under $4.50 a smoke, I’m half-tempted to snap up every box I can find, move to a yurt in the wild, and pass my remaining days smoking Partagas Black. It’s hardly a newcomer, but I am hard-pressed to find anything more smokeable right now; disagree if you like, but you’re welcome to find me in my yurt if you change your mind.

Montecristo Relentless
I should hit up these Montecristo guys for horse picks, because whoever was responsible for blending Relentless hit my personal tobacco trifecta of Nicaraguan, Brazilian Mata Fina and Mexican San Andres and made a champion cigar that burns a solid medium-plus. This newest Montecristo line extension (released this past Fall) is among the more affordable of the bunch by comparison, which means – finally – a Monte that doesn’t have to be relentless upon your cigar budget. Big and tasty smoke output, and the burn is dead-on nuts…which puts it square in my 2014 Winner’s Circle.

I’m a medium to full bodied cigar lover and I’d say I smoke around a dozen a week in the winter and a bit more than that when the weather is nice in the spring and summer (ok, sometimes a whole lot more). I really don’t care how much a cigar costs or if it’s a trendy smoke; all I care about is great flavor and consistency, and the three sticks I chose for 2014 just happen to be consistently great.

CAO Colombia
A new offering from the mind of Rick Rodriguez, this is a medium bodied smoke that possesses one hell of a lot of flavor. The wrapper is a golden Honduran leaf, but its uniqueness comes from tobaccos grown on the Colombian coastline. The flavor profile is incredibly toasty, nutty and slightly sweet. Total proof that not every flavorful stick has to grow hair on your dangling kachongas.

Jericho Hill
In my opinion, one of the best sticks to hit the market this year, Jericho Hill is a full flavored beast, yet refined and smokes like a dream. Crowned Heads, in association with My Father Cigars, created this blend of Nicaraguan binder and fillers with a dark and supple San Andreas wrapper. It’s just one of those hand rolled gems that lets you know you’re smoking an incredibly well-made cigar with every puff.

Leccia Black
While this isn’t a new cigar, it’s consistently one of my “go-to’s” when I want to smack my taste buds with serious flavor. There’s a lot going on in this stick with tobaccos hailing from Nicaragua, the DR, and Brazil with a toasty Habano wrapper. But what gives this baby its unique flavor and aroma are the fired-cured tobaccos that produce a smoky mesquite sweetness. Sam Leccia told me that he found that using a quarter of a leaf gave it just enough oomph without becoming overpowering.

I’m a big advocate of smoking what you like. That’s why I simply smoked what I liked this year, and if a new cigar happens to be on my list, then great. I’ve never been one to go screaming towards the counter with a fistful of bills in my hand, demanding the newest cigar on the market. I walk in, pick what I like, and walk out. Having said that, these are my top three smokes of 2014.

Alec Bradley Nica Puro Robusto
Interestingly enough, Davidoff also released a Nicaraguan puro in 2013, and Cohiba just released one in 2014. Of the three, I go for Alec Bradley simply due to the stellar flavor, full body and strength profile, and low price point. It’s a no brainer to reach for the Nica Puro. It’s honestly one of my favorite smokes, using some of my favorite tobaccos, at a price I can always afford. The Nica Puro earned a permanent spot in my humidor for sure, and hopefully this turns you on to these magical stogies as well. But be warned; these are rather strong. Newbies beware.

Aging Room Maduro Mezzo
Again, another hit from not-the-year 2014, but this cigar deserves a lot more recognition than it currently receives. It’s actually really frustrating to me that this cigar isn’t topping the charts. It looks menacing, but it’s far from it. Full bodied in every respect, this is a sweet maduro smoke that goes great with a warm spiced (and of course spiked) cider, or a port. To me, this is one of the best cigars to hit the market for its affordability mixed with astronomical flavors. It’s perhaps my favorite as an after dinner smoke.

Quesada Oktoberfest 2014 Bavarian
Light up your stogie and raise your stein! This cigar will help you get lit, time after time! All miserable rhymes aside, the Oktoberfest is blended by Quesada to pair perfectly with any Marzen style beer out of Munich for Oktoberfest. So if you love beer as much as I do as well as cigars, this is a match made in heaven. Just be careful – these bad boys smoke for a while, which gives you a lot of time to put a few back. This annual treat is always on my list of favorite cigars for their rich flavor and genius concept. I mean, come on… who doesn’t love a good stogie and a brew?

Agree? Disagree? Leave a comment and tells us what your favorite cigars were this year.

Every cigar tastes the same to me, can’t find a a flavorful cigar with a good taste and aroma, what should I try?

Strong Cigars: How do they make them so potent?

When Can I Buy Cuban Cigars in America?