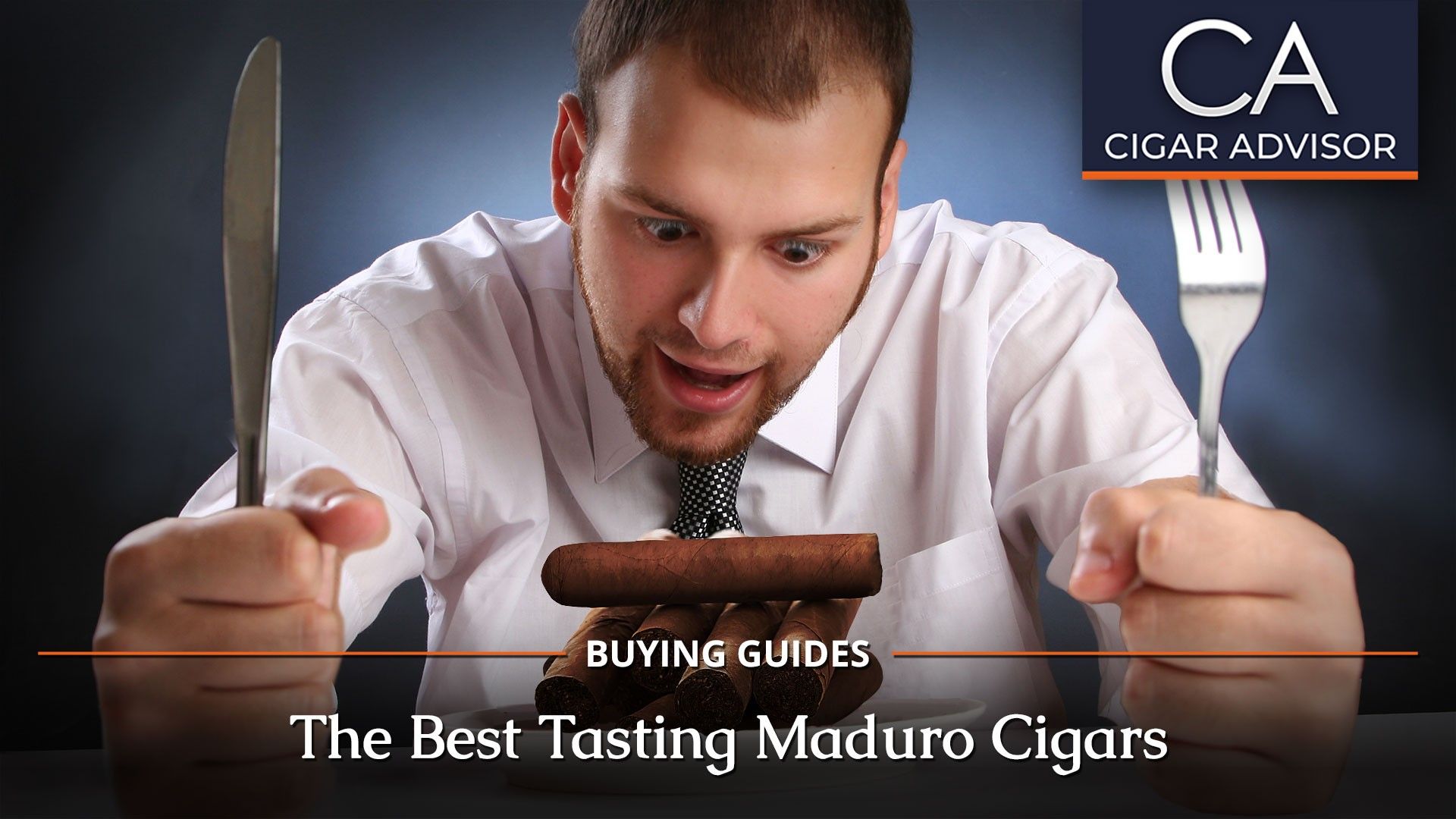 The old adage is that “the best cigar is the one you’re smoking right now.” But if you have Maduro on your mind, you have a specific – and highly desirable – set of expectations when it comes to the taste and flavor attributes of your smoke.

But what makes for the best-tasting Maduro cigars? For starters, quality. Most, if not all of the cigars in this report are clad in a wrapper that’s been well-aged, in addition to the lengthy and intense process that yields a top-quality Maduro color and flavor. That’s right, color – Maduro is not a type of leaf, but a color shade. It’s achieved through fermenting the wrapper leaves at a higher temperature and for a longer time than usual for wrapper leaves. This extra heat and time bring out more oils and natural sweetness from the sugars in the leaf. No “painting” here – all of the Maduros in this list are fermented the natural way, with no shortcuts in the process.

Yes, yes…”taste is subjective,” you say. While I would tend to agree with you, I’ll fall back on my ratings-by-crowdsourcing argument to show that if a significant number (let’s say 10 or more) of our fellow smokers can agree that a cigar tastes good, then…well, I’ll take them at their word that it tastes good.

So what are people looking for in “the Maduro taste” to help these cigars achieve high taste ratings? In general, these wrappers feature a mix of spice and sweetness that complement each other. It’s also common that if your palate can detect them, you’ll find an interesting spread of flavors that range from espresso and dark coffee bean to dark chocolate and cocoa flavors in the mix.

Here’s a quick guide to the most commonly used leaves:

Brazilian…Cigar wrappers cultivated in Brazil, such as Mata Fina and Arapiraca produce a smooth, slightly earthy smoke that is naturally sweet (not saccharin) with a plentiful aroma.

Broadleaf…Broadleaf cigar wrappers tend to have a toasty quality, and whose flavors lean more to the meaty and earthy side in contrast to a more faint natural sweetness.

San Andres…these wrappers are very thick, very oily; they were originally cultivated in Mexico, but are grown in many countries, and tend to exhibit bolder tastes of spice and chocolate, with a touch of earth.

Ed. Note: When this article was written, it included requirements based on a cigar rating system that Famous Smoke Shop no longer uses. I’m honoring two of the original requirements:

1. Each cigar must have received at least 10 ratings on Famous-Smoke.com.
2. We’re highlighting the highest-rated size for each, so that you’re getting a consensus of taste not just from us, but additionally from everyday cigar enthusiasts like you.

Let us know which Maduro cigars taste best to you in the comments below…but first, here’s our list!

Made in partnership with Romeo y Julieta and AJ Fernandez, House of Montague is a Famous exclusive that goes all-in on creamy Maduro sweetness thanks to its well-fermented Connecticut Broadleaf wrapper. Expect flavors of roasted coffee, earth, and oak with hints of dark fruit and vanilla, plus an eye-opening shot of spice. If that doesn’t pique your tastebuds’ interest, your wallet will be especially pumped about the price.

If you want the full dark side experience, you really must make some room in your humidor for Camacho Triple Maduro. And that’s because all the tobaccos included—Mexican San Andres wrapper, binder, and filler—underwent that coveted bonus Maduro fermentation. Going times three gives this Camacho a sweet-leaning disposition that adds coffee and cocoa, earth, and bold spices for a pleasing palate experience. For a Maduro lover…the buck stops here.

There are few cigars for which I’m willing to shell out top dollar. Plasencia Alma Fuerte stands among them. It was love at first puff for me thanks to Alma’s banquet of flavors like cocoa, nougat, coffee, and vanilla—all with an inviting medium-bodied temper and impeccable quality. These cigars are truly a treasure and worth every penny of the price they command. Grab a box to keep aside for special occasions and I’m betting you’ll agree!

Putting out a sequel to La Gloria Cubana’s 91-rated Serie R masterpiece was a tall order, but they were up for the challenge. Serie R Black picks up where its predecessor left off with a richer, full-bodied flavor profile that stirs up pyroclastic plumes of smoke. Within it, you’ll find notes of baking cocoa, earth, dark wood, and pepper with a long finish. But is it as good as the original? Some say it’s better, but I’ll leave that to you to decide.

Hailed as one of Perdomo’s best, the all-Nicaraguan tobaccos inside Perdomo 20th Anniversary Maduro burn slow, full-bodied, and velvety with a lingering pepper. Word has it the Epicure is the go-to size for this best tasting Maduro, and even though I prefer a narrower cigar, it’s hard to argue with a 4.5-star rating. Level up your Maduro experience with the brand that helped put Maduro on the map. You’ll be happy you did!

No list of bests is complete until we’re treading into super-luxury territory…so now’s about the time we trot out Padron. As with all Padrons, a Nicaraguan puro; but unlike all their others, their best-tasting Maduro comes from the Family Reserve—the 85 Year to be precise. This line is the cream of their crop – literally – boasting ten-year-aged tobaccos from their finest stock. Yes, they’re pricey; but as the reviews will tell you, you get what you pay for in these celebration cigars.

The Nub is short in stature, big in ring, and huge on high taste ratings. Inside you’ll find a nice array of Nicaraguan tobaccos that bring a robust pepper-spice combo free of harshness, but it’s the Brazilian Maduro that tugs on the taste buds with dark, coffee-laden sweetness that one reviewer thought was, ”a nice surprise.” If you’ve never sampled Nub before, go directly to the best cigar in their stable…you’ll see.

And now for something completely different…here’s the straight dope: Java Mint is infused with a mellow brew of mint, vanilla, and mocha essences, all of which highlight the richness of the Nicaraguan tobaccos inside. The icing on the cake is a sweetly-rich Mata Fina Maduro wrapper from Brazil, infused with smoke that is a nice diversion for the experienced smoker…or a great treat for those who partake occasionally.

Love is in the air, and it is delicious. La Aroma de Cuba Mi Amor is rich, to be sure – full in flavor, full in body and by all accounts, pinning the taste-o-meter. At the heart of Mi Amor is an all-Nicaraguan longfiller blend that’s clad in a double binder, then finished in what is probably one of the finest examples of Cuban-seed San Andres tobacco that was actually grown in Mexico. “The wrapper really ties it all together” was one comment that lingered, almost as long as the sweet and earthy undertones on the finish of this remarkable cigar.

Many of these best tasting Maduros have been in circulation for quite a while; but while it seemingly makes Flathead a relative newcomer, this box-pressed CAO big boy smoke has quickly tapped into the desire for full body and deep, rich flavors. Connecticut Broadleaf Maduro is back with its mellow natural sweetness to counter the spiciness of the Ecuadorian Habano binder, and balance the burly Nicaraguan longfillers in the middle with amazing skill. Follow the advice of those who have sampled it before: use a cigar punch to channel the flavor, and you’ll see why this top-tasting dark leaf hits all the high notes.

Creamy, smooth, rich, espresso-like, tasty, satisfying. All these words were used to back up the high “Taste” ratings of Cohiba Black, as was “off the hook.” Here’s how Cohiba did it: mix smooth Dominican and earthy Mexican tobaccos with a bright and flavor-rich Dominican Piloto Cubano; age it all together for three years, then roll it in the heartiest U.S. Connecticut Broadleaf they could find. “Bring the scotch,” as one reviewer noted, and you’ll be spending quality time with one of Cohiba’s most flavorful offerings.

Wondering when we were going to get to this Oliva stunner? If you haven’t yet been introduced, this cigar showcases the top-notch Jalapa-grown Habano tobaccos coming off Oliva’s farms, all of which contribute a marvelous complexity with an intoxicating aroma to match. The reviews are actually more of the rave variety, with consistently stratospheric marks for taste – so it’s not a shock that Melanio has brought home a number of highbrow awards, and why it’s a natural for inclusion in our Best Tasting Maduro Cigars report.

OMG. This list should be renamed “cigars famous smoke want you to buy”. Really? Java mint. Nub. Wow. You need some better taster/judges

Love the Avo Maduro, when I can find it.

Not arguing with anything on that list, just wanted to cast my vote for the Sancho Panza Double Maduro. Sublime…

Some very good picks listed here. I bought a box of Fuente Anejo last year at Thanksgiving time. I love them and have been getting them every Fathers day and around the Holidays since they aren’t available at other times of the year.

Really getting into the Charter Oak line from Foundation.

Good job on picking these cigars. There are a lot more as well but none the less well done.

Best Maduro is Cohiba Maduro 5 Genios… in my opinion…

Reading Time: 4 minutes The most unsung heroes of our cigar accessories, hygrometers keep tabs on our stash so we don’t have to. Check out our definitive list of the best humidor hygrometers and discover how to choose one, adjust it if necessary, and learn why it’s more important than any other tool.

Reading Time: 6 minutes Having a glass or two of red wine with a premium cigar is one of life’s great pleasures. Too often, this combination is forgotten—and that’s to our detriment. Our Cigar Advisor takes a deeper look into this natural pairing and offers up some great suggestions along the way.