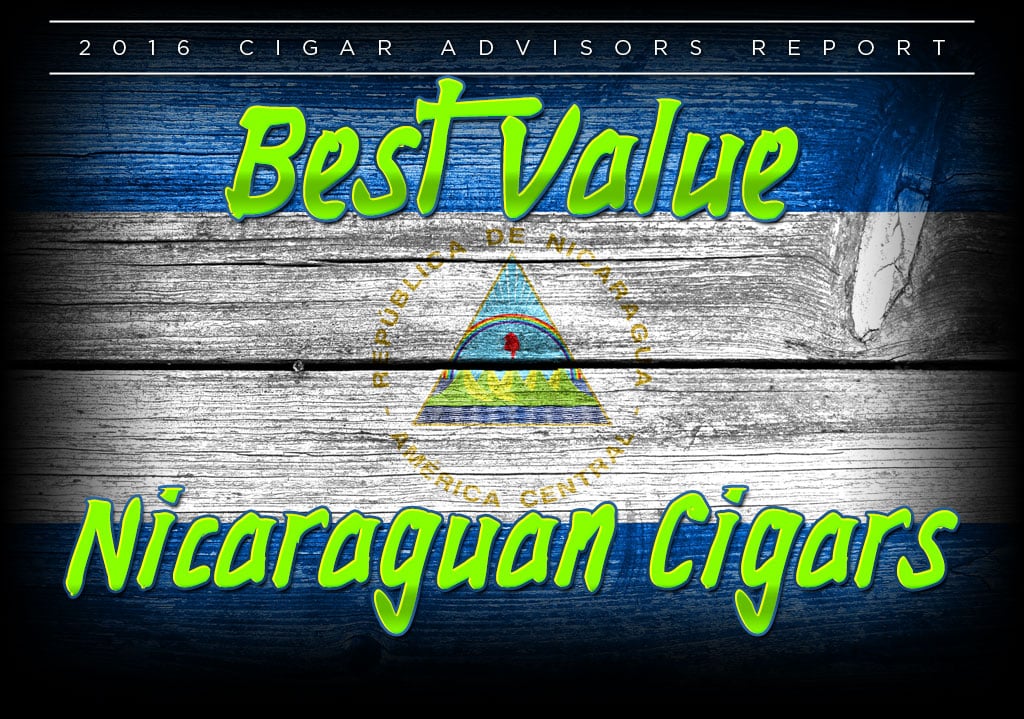 Before we can start talking about the “Best Value Nicaraguan Cigars,” we need to hash out what “value” really means. Your first inclination might be to use the words “bargain,” or even “cheap.” But those words aren’t interchangeable, as there is no shortage of cheap cigars that aren’t even worth their low price tag because of the materials, the construction and the lackluster experience you have while smoking it.

And there it was. Value: how much (or how little) did you pay for it, and how much did you enjoy it?

To be called a value smoke, a Nicaraguan cigar – or any cigar – doesn’t necessarily have to be priced ridiculously low (though it certainly helps), because I think their value needs to be measured in this different way. Investors try to make it easy, determining worth in their simple yet crafty dance of supply, demand, and market price. But apply that to gourmet items and commodities – like wines, foods, and in the case of this report, cigars. A cigar isn’t necessarily valuable (or should we say pleasurable?) because we paid $15 for it, but maybe that cigar is $15 because it’s really that (insert the term you want to use: good, tasty, honest, authentic, name brand, boutique, etc.). The question of value then becomes, what are you willing to pay for the experience?

It’s usually the lowest cost possible – you don’t need an economist to predict that. Which means that you get the “best value” when the smoking experience you desire – a memorable peppery shot of Nicaraguan flavor and body – exceeds the cost of the cigar as much as possible…and that ain’t easy.

Think about this for a second: what is the cost of time, labor, tobaccos, boxes, taxes, duties and services that go into making a cigar? Well, they’re not small – so the fact that we can even put together a list of 12 best value cigars from Nicaragua that each cost less than a Happy Meal is both startling and wondrous. And while they’re less expensive than their premium brethren and may use some alternative methods of production – and I’m talking about more than just bundles vs. boxes – a nearly identical amount of pleasure can still be derived without the use of higher priced methods and ingredients.

So in the case of the following cigars, I accounted for their value through a combination of the following: their price tag, reference to a prominent brand (skills matter), the raw materials used, and the representation of Nicaraguan taste. There are also some intangibles, like the cigar’s appeal to someone who would enjoy a Nicaraguan cigar, the pleasure derived from smoking it and the overall experience. And like I said before, value doesn’t have to mean bargain – though many of these cigars can be considered as such, because if you do your homework you can have any cigar on this list for well under $5 dollars, with most under 4 – a relative pittance in a hobby where some of the most premiere examples can cost upwards of $30/stick.

Ed. Note: Per-cigar prices shown are based on Famous Smoke Shop box prices at the time of writing, and are subject to change.

Schizo 70×7: What have we here? Big Ring Madness for under $3/stick sans box, that’s what. Schizo, an all-Nicaraguan mix that smokes mild-medium, might just be the Value Cigar King of the list – and not just because of the available natural (shown above) and maduro wrappers. A mixed filler by way of Eiroa & Co., this 70×7 spares extra coin by going the bundle route; do even the most simple of cost-benefit analyses and you’ll see you’re getting a whopping 70 ring smoke – and the hours of pleasure derived – for a panatela price.

Perdomo Fresco Maduro Churchill: Perdomo’s Fresco lines are already known as high value Nicaraguan cigars – and that’s because the man takes no shortcuts. And as Nick ferments some excellent wrapper leaf, this extra-large Churchill makes for a stocky, affordable maduro whose price sorely underrepresents its true value. Medium-full and direct from the fields of Nicaragua, Fresco’s cost dips to around $2.50 a stick because it’s done in a bundle, and because Perdomo absorbed many costs in an effort to provide you an affordable everyday stick.

Final Blend Toro: Final Blend is an earthy, sweet and spicy Nicaraguan value smoke that – quite simply – underpromises and overdelivers. Finished in a dark Brazilian Oscuro wrapper and brimming with a 3-nation filler blend, the toro hovers around a per-stick price of 3 bucks. The entire line is manufactured in a little out-of-the-way factory in Nicaragua that’s hard to find; but they just do what they do in order to turn out an honest, flavorful handmade affordably and consistently, and that in itself adds significant value.

El Suelo Vuelos: L’Atelier bucks convention and overturns the quality over quantity argument; turns out, you can have both. Blended using Nicaraguan and Broadleaf fillers by Tatuaje’s Pete Johnson, it’s often argued that some of his best cigars are in the petite corona size like this one. Which is why you’ll want to load up on the 50 stick big-buy: do the math, and bring them home for a paltry 2 bucks and change a piece. Think about that – Pete Johnson/My Father boutique quality, in the form of top value Nicaraguan cigars…worth exceeds cost, indeed.

Immortal Toro: Nestor Plasencia is one of the biggest players in the Central American cigar biz: if he’s not making cigars for a brand, then odds are he’s sold them some of the tobacco they’re using. Immortal is the case of the former, utilizing a puro recipe capped in a spicy-sweet Habano wrapper to create a value Nicaraguan cigar smokers can enjoy for well under 3 dollars. Heavy in that authentic Nicaraguan body, with a just-right touch of strength for the cost of a large coffee.

Rocky Patel Nicaraguan Torpedo: Rocky Patel’s previous blends done in this fashion have been runaway best sellers – given that his best cigars channel luxury, it’s no surprise then that his value smokes (like this one) exhibit the taste and character of his ritzier lines that incorporate Nicaraguan tobaccos, but for a fraction of the price. We’re talking sub-$4, here – especially nice, as torpedoes are often significantly more expensive. Rocky Patel Nicaraguan wears its name on its sleeve: full bodied and full flavored, and has that punchy Nicaraguan taste to the end.

La Vieja Habana Corojo Celebracion National: And here you thought you couldn’t get into the Drew Estate cigar scene without deep pockets. Made in the same factory as the pricier DE blends, this cigar combines Nicaraguan fillers under a spicy Corojo wrapper; but by utilizing a Cuban sandwich filler approach, they’re able to create value and keep it reasonable. At well under $3 a piece (by the box) La Vieja Corojo – and the entire La Vieja lineup, for that matter – is proof you can soak up Drew Estate’s renowned satisfaction without having to mortgage your house.

La Zona Habano Robusto: Erik Espinosa has blended some of his most potent smokes at his Esteli HQ; and his La Zona factory’s namesake cigar, the La Zona Habano, shows he knows how to navigate the sometimes choppy waters of making good value Nicaraguan cigars that smoke smooth. That’s a challenge in itself, given the heady components involved – in this case, medium-full Nicaraguan fillers and a spicy Habano wrapper. For added value, this $3-ish robusto displays an intriguing amount of complexity that’s usually reserved for more pricey premiums.

CAO La Traviata Divino: The CAO LA Traviata somehow flies under the radar…which baffles me, as it performs exceedingly well in both the ratings and the value categories. That’s right, this budget-friendly robusto got 90+ marks by pairing ligero longfillers from the Dominican and Nicaragua under a Havana wrapper grown in Ecuador. Part of the CAO Classic series, very refined La Traviata was not designed nor intended to be a Nicaraguan value cigar; it just happened to turn out that way. And thank God – because you can stuff this whopper of a smoke in your humidor for less than an actual Whopper.

Perla Del Mar Perla P: Even more affordable than their “everyday” smoke Brick House (and made in that same factory, fyi), Perla Del Mar boasts an all-Nicaraguan core that’s milder and mellower, and a nice step up for mild cigar smokers seeking value. Here’s why: the Perla P is a husky, 56RG Rothschild that exhibits that desirable smooth Nicaraguan flavor and significant complexity for under $4.50 each. Seem a little pricey by comparison? Remember, these are the folks also responsible for luxury class cigars like Julius Caeser – so the chances of their cheaping out are slim.

Perdomo Small Batch Sun Grown Corona: Perdomo is back again, this time with a wrapper that’s extra-fortified after basking in the brutish Nicaraguan sun. Few do Sun Grown as well as Perdomo – and given that you can tread into small batch/limited edition cigar territory for $4.50/stick, Nick is doing you a sincere solid. The Small Batch is a puro; and with the entire assembly of tobaccos having been aged for a full decade (or more), smoking this corona spark plug is as memorable as the deal. Itself.

Oliva Serie G Special G: Oliva’s is another case where quality and quantity contribute equally to value. Special G is a uniquely shaped figurado that’s more of a perfecto than anything, already a hard cigar to make and much more costly to produce in scale. But with 40 of them in your box, it brings the humidor packing of these born-and-bred Nicaraguans down to a much more reasonable three eighty-something per cigar – a veritable bargain, given Oliva’s extensive stock of top tobacco, from which they’ve created a slew of historically highly-rated handmades. Oliva cigars are well known throughout the industry for top-notch production standards.

There are my 12…your mileage may vary, as we all tend to perceive value a little differently based on factors we may or may not realize when we buy a cigar to smoke. I think it’s actually that little voice in your head, or that feeling you get in your gut, when you look at a cigar on the humidor shelf and debate internally whether it’s “worth it.” I think these are.

So ponder again our definition of the word “value,” and how it’s used to describe our list of Best Value Nicaraguan Cigars: what does it mean to you?

Just picked-up a mazo of El Suelo. Worth every money-saving cent.

Why don’t you guys put out a sampler pack of these? Hard to commit to bundles, taste untasted.

Diesel Uncuts fit the category. Great smoke and nothing fancy. $3/stick. Also agree with Dennis. Bundle the reviewed sticks. I like to try new ones without chunking for a box. Did that before and gave them all away! Great list!

5 Things You Need to Know About … Sharing Cigars with Friends