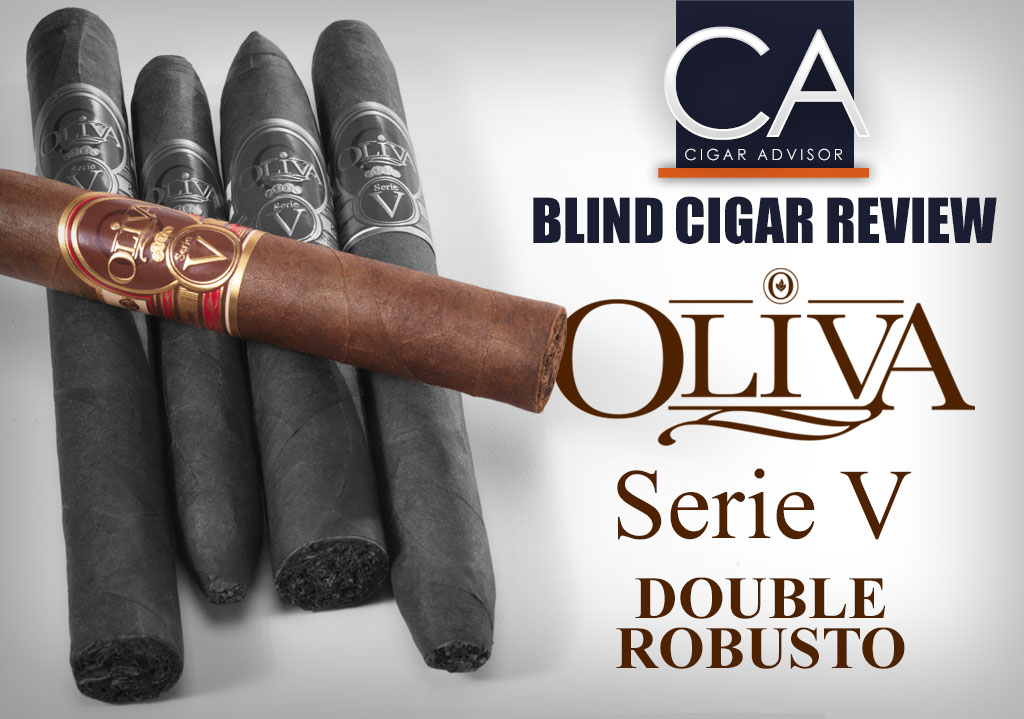 A Special Guest Cigar Review by…

When the Advisors review cigars, the four of us usually get together with a smoke, a couple cups of coffee, and ham it up while giving our impressions of a cigar in the hopes you might find some useful information about it; maybe, by the time we’re done, we hope you’ll want to try it for yourself. Today, however, we wanted to give you the chance to experience something a little different…a blind cigar review. And that gave us the opportunity to turn over the controls of the CA Mothership to the guys at Blind Man’s Puff, who unleashed their review skills on the Oliva Serie V Double Robusto for our collective benefit. It’s a popular and highly-rated smoke – but the question is, would they know that, if they weren’t aware of it being a Serie V?

Ed. Note: If you’re not familiar with the process, a blind cigar review – or blind tasting – is just like it sounds: the cigar’s band is removed and replaced (the new one usually just has a tracking code on it), and the people smoking it give notes, tastes and impressions without any background knowledge about what they’re smoking.

The idea is that by removing any clues to the cigar’s identity, it also removes any expectations you may have about how good it is, how strong it is, how it should taste, and so on. For instance…if we told you that the cigar you were smoking was an Oliva Serie V, you’d probably have a few preconceived notions about flavors and how it should burn, or at least some biases. And because you expect it to smoke like a somewhat strong and full-bodied Nicaraguan premium, you end up comparing the cigar to the qualities you think the cigar should have based on your experience. Those biases are (hopefully) removed once you’ve deprived your instincts of information such as what brand it is, how much it costs, where it’s made, how it’s made, box or bundle, how popular it is, and so on. Here’s a really good opinion piece on the science behind a blind cigar review that I think you should read, if you’ve never tried it.

You’ll see that each comment in the review is tagged with a smoker’s name – that’s because when the Blind Man’s Puff guys review, they’re doing it at home…which in some cases, is a couple states away from each other. They describe it on the BMP website like this: “To achieve these reviews…[Aaron] un-bands the sticks supplied and ships them off with only a number to the reviewers of that stick. Then, each reviewer completes a pre-made form that was created with a scoring system, and room for notes. We then compile the numbers using all that statistics stuff we learned in high school that we thought we’d never use like Standard Deviation, and Outliers, and we get a total average for each category and a weighted total score. We then pick out trends and consistent things we see about the cigar in the reviewer notes and add that to the review.” Science!

“This cigar is almost flawless in appearance. The wrapper feels and looks toothy and is very uniformly colored. There are no large veins and the seam work is great. The triple cap is applied expertly.” – Emmett (rhetorik)

“This cigar had a pleasant aroma of leather, sweetness, and a hint of coffee. Not overwhelming in any aspect.” – Kent (Throck) 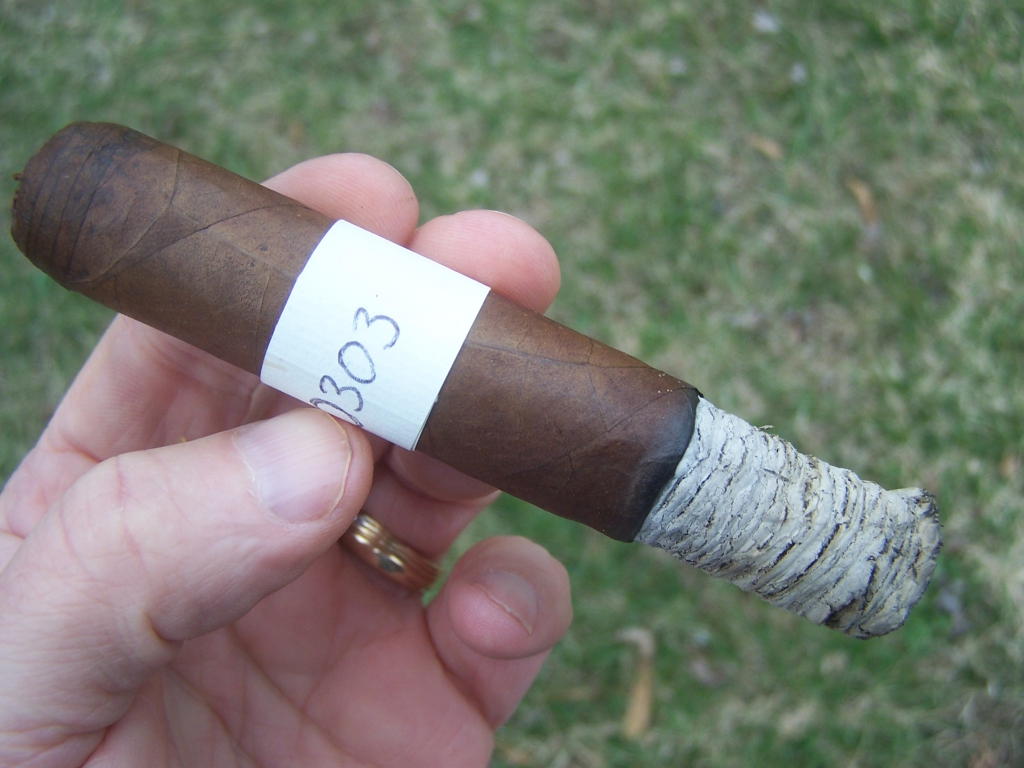 “Mild coffee mingles with cedar as the cigar begins. There is a little spice on the retrohale that brings a contrasting flavor to the table. As the third progresses, the sweet nuttiness of marzipan and grass push the coffee to the background.” – Gregg (McGreggor57)

“The first puffs are very cedary with some leather in the background, and not much spice. A little further in, a nice strong espresso flavor joins in, making for a pretty complex third so far. At the end of this third, some spice starts to build, making me look forward to the next third very much.” – Emmett (rhetorik) 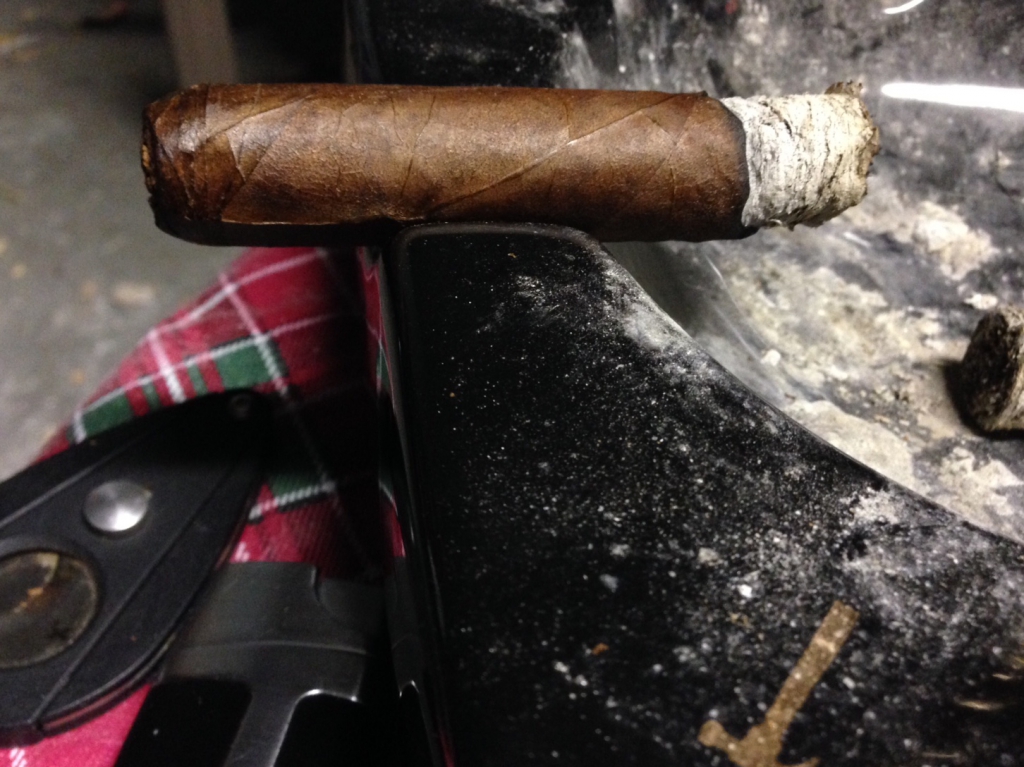 “A peppery wood taste is still up front and kicking. The dry tasting leather is joined by a light, but rich coffee flavor that keeps the heat at bay and smooths some of the edges off to help level things off in a good way.” –Ron (shuckins)

“The second third was my favorite. The taste of raisins continued, but the smoke bellowed forth. I found the smoke deep and rich with quite an ample amount. A new flavor was introduced in this section which I only could describe as a mossy/peat flavor which slightly added to the complexity. Accompanying this second third was my Dalmore Cigar Malt scotch which paired exquisitely during this section.” – Kent (Throck) 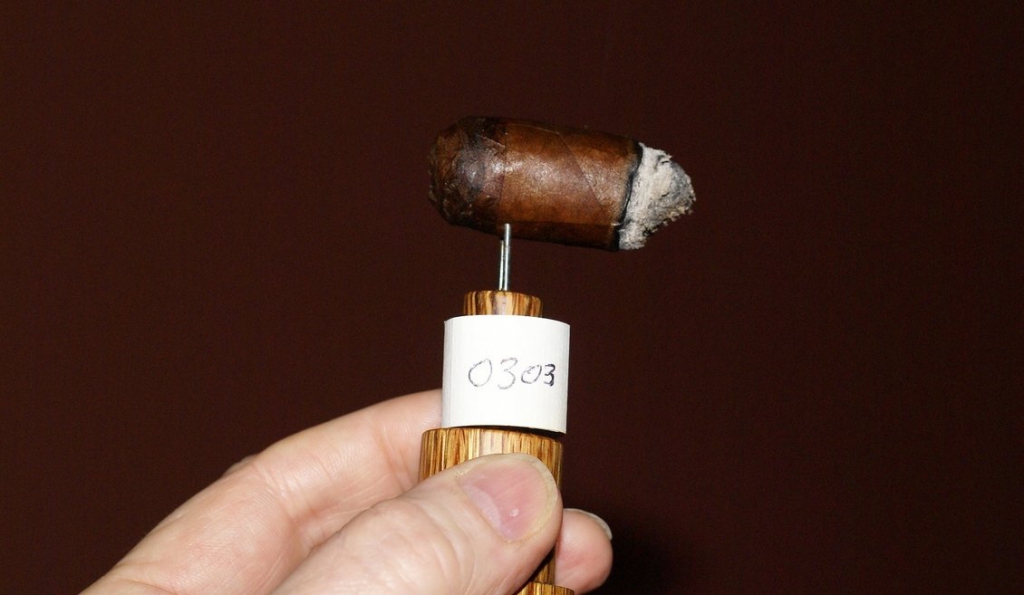 “At the final third, and I’m bummed because I wish this stogie was longer! Flavor wise, still spice, pepper, strong bitter coffee, but that backed off and I was getting a really nice rich tobacco flavor. Everything still blending well. This one is definitely going to be smoked to the nub.” – Robert (NavyPiper)

“This third is the boldest of all the thirds, with the dominant flavor being espresso. There are still some leather and random spices in the background. The cigar never got hot at the end. This was another great third.” – Emmett (rhetorik)

“As dense packed and firm and heavy as the stogie was, I was expecting a tough draw, but it was dang near perfect. Couldn’t ask for anything more from the draw.” – Robert (NavyPiper)

“A really nice burning cigar. Slow, steady and very even, leaving a soft flaky ash in its wake.” – Ron (shuckins)

“A slight ding for the draw on an otherwise flawless burn.” – Gregg (McGreggor57)

“Not much in the way of flavor changes, just a steady smoking cigar that would probably have potential with some time in the humidor.” – Ron (shuckins)

“The flavors were not complex but still offered some nice transitions. I would have loved for the second and last third to have been reversed with the sweeter and more mellow flavors ending the cigar. Regardless, each segment of the cigar offered a standalone enjoyable experience.” – Gregg (McGreggor57)

“This was a terrific stogie. From the moment of punching the cap and firing it up, it was very enjoyable. I wish it was longer. I’m not into Churchill sized cigars, but this is one I would get. This is one I’m going to stock up on when I learn what it is. I smoked this guy ‘til I literally couldn’t hold it any longer. A dang fine smoke.” – Robert (NavyPiper)

“I really enjoyed this cigar. The construction was top-rate, and the flavors were solid and balanced the whole way. Very enjoyable. I would definitely pick up a few more of these as the profile is definitely one I enjoy.” – Emmett (rhetorik)

“A very solid cigar. I really enjoyed the distinct flavor of raisins without any sweetness and the thick plume of smoke that this produced, especially in the second third. The construction of the cigar was spot on.” – Kent (Throck)

Click the chart for more results from this blind cigar review…

Glad to hear these reviews, just bought my second box of Oliva V’s, enjoyed the first two. Thank You for such GREAT REVIEWS!!!

Emmett Malone is the majority owner and founder of Blind Man’s Puff, he also contributes reviews as a blind panelist. He lives in beautiful Denver, Colorado and absolutely loves it, taking advantage of skiing in the winter, and hiking in the summer. He has been smoking cigars for over over 11 years now. He appreciates all kinds of cigars from mild-bodied subtlety to gut-checking Pepin-pepper. He enjoys a good bargain stick but also appreciated the extremely rare, expensive, and hard to find. Aaron Loomis is Blind Man's Puff Co-Owner/Cigar Distributor/Review Contributor. Aaron lives in the California Bay Area and has been smoking cigars for four years. He collects, documents, photographs, and distributes most of the cigars for Blind Man’s Puff and takes turns putting the reviews together for the articles. He also occasionally does a blind review. He enjoys seeing what the guys come up with smoking something that they have no idea about. Other than cigars, baseball is his other go to hobby. He loves watching and playing the game. He’s a fantasy player (stat head) and also plays softball three times a week.

Reading Time: 4 minutes Earlier this year, Gary reviewed the Onyx Estelí for this column, and now comes Onyx Bold Nicaragua. Both share Mexican San Andrés maduro wrappers, but tell quite different tales. If you want the full story, this review of the Onyx Bold Nicaragua Toro reveals all.