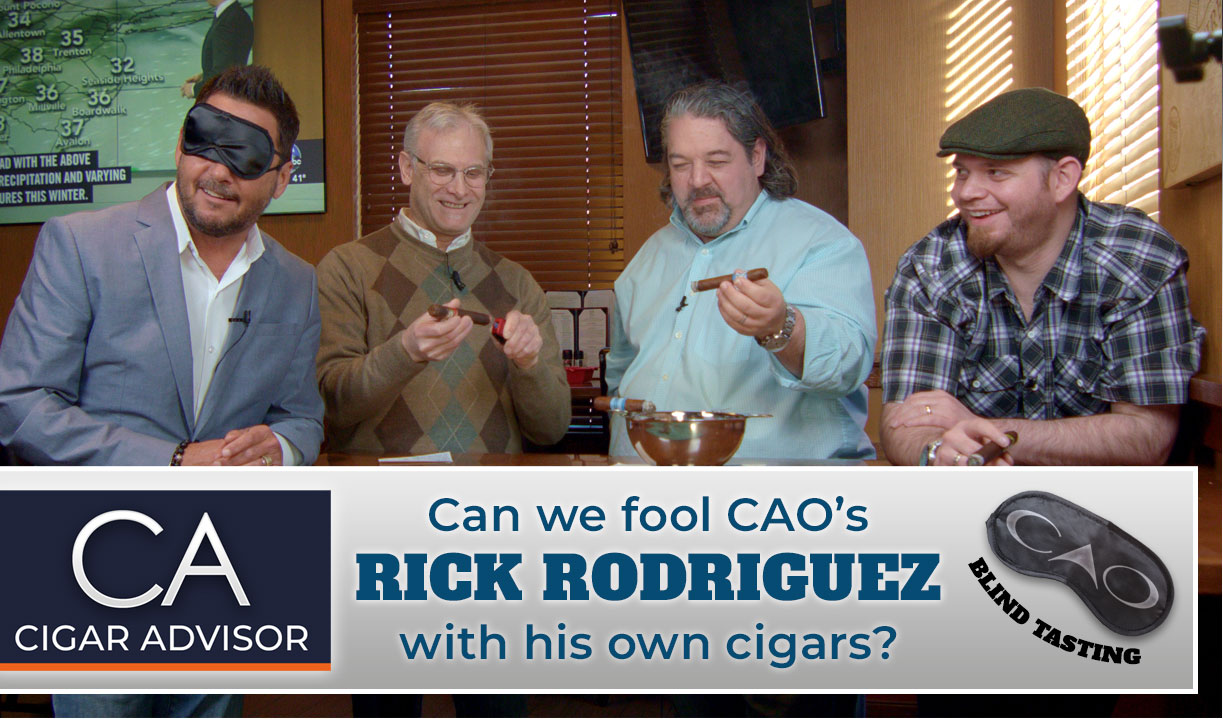 Can we fool CAO’s Rick Rodriguez with his own cigars?

Four guys and a blindfold; what could possibly go wrong?

Recently, we met up with CAO Cigars‘ Rick Rodriguez in Famous Smoke Shop’s Leaf Cigar Bar & Restaurant with one goal in mind – (April) fooling this fan-favorite blender by way of a blind tasting, with a twist…the video evidence is below.

When it comes to rating cigars in a blind tasting, the “blind” part of the process is you don’t know what you’re smoking. You send someone out to get a sample cigar, and have that someone remove the band before it’s given to you to smoke. So with no idea what cigar you’re about to rate, you (supposedly) can give it an honest and impartial review – no sway or bias because of who it’s made by, what country it’s from, and other factors you may or may not know about the smoke before you set it ablaze.

But we would not be satisfied with a normal blind tasting, if Rick was involved. (It’s nice he appreciates our inclination to not be boring. Or normal.) Therefore,  it would not be enough for us to simply remove the bands from the cigars; “We must leave nothing to chance,” we nodded…

So we turned the lights out on Rick Rodriguez and blindfolded him.

With his sense of sight taken away, there’d be no way Rick could visually identify any wrapper colors or traits. All we told him was that he would be sampling some CAO cigars, and it would be entirely up to his palate to see if he could identify them.

Now, a blender will tell you that it’s hard for them to choose their favorite cigar because they’re like his or her children. So if Rick wouldn’t pick his favorite, we wanted to at least see if he could pick them out of a lineup.

As for the CAOs in that lineup, the three that Rick sampled:

Of course, we’re not just going to stand there and watch the guy get all tight-collared, smoking cigars on the spot…so we decided to take this opportunity to pepper him with questions, where he delivered pointed smoking advice we think you’ll like, the method of exercising proper etiquette when receiving gifted cigars, and some insightful tricks of the trade that blenders employ when crafting the cigars you know and love, like these.

Last but not least, Rick gave us a world-premiere exclusive by announcing three upcoming CAO launches in 2019. First was an entirely new brand called CAO Sessions (a herf-ready cigar that’s meant to be shared and enjoyed), a new high-end addition to the Flathead line called V19, as well as a newcomer to the Amazon Basin trilogy to replace the Anaconda. You heard it here first!

As for the blind tasting…Did Ricky sink or swim? You’ll have to watch the video to find out –

Thanks for being a good sport, Rick!

Reading Time: < 1 minute This cigar has charted the “Top 25 Cigars of 2018” lists of Cigar Journal, Cigar Aficionado, and Cigar Advisor. Find out why, and what else you need to know about it, in our quick Ramon Allones cigar review – click & read now…