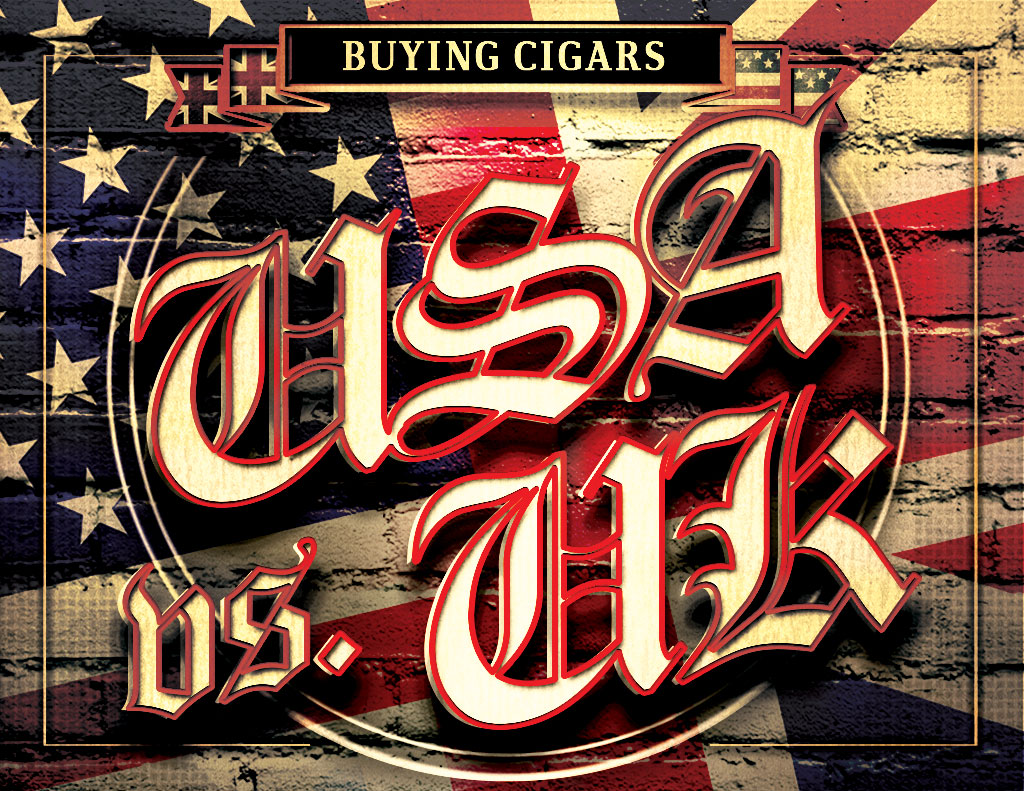 Buying Cigars Overseas: The US vs UK Experience

Cigar Advisor allowed me to go to London for about 9 days and enjoy some much needed rest and relaxation from smoking cigars at my desk, to go smoke cigars over in England. Of course I did all of the touristy things London had to offer. But instead of telling you fine folks about how I almost got ran over at every crosswalk by cars barreling down the other side of road, trying to hop from one pub to another, I will instead share with you my observations between the American cigar market, and the London cigar market. The differences are pretty wild.

I would like to first thank my friend Pavel Kabina of the Havana Cigar Exchange at Park Tower Knightsbridge who was kind enough to show me a couple smoking lounges around London. He was even good enough to introduce me to the UK’s number one cigar Sommelier, Mike Choi of Edward Sahakian Cigar Shop in Bvlgari Hotel and Residencies. If you ever skip across the pond, these are two shops you must visit, and the two men to speak to if you’re looking to gain a wealth of information, and I can’t thank either man enough for his time.

To begin, let’s go over what each nation smokes. Typically, the American cigar smoker likes medium to blow-your-face-off strength, large cigar sizes, and big flavor from start to finish. Add in copious amounts of smoke, a modest amount of complexity, and make sure it isn’t Cuban, and there you have the average American cigar smoker. The UK is a little different. In terms of size, Robusto is king with Short Robusto being a close second, and it seems that ultra smooth, extra complex, well-aged, full bodied Cuban cigars are what satisfy the London palate. I know, right? It sounds terrible to me too.

It’s hard to convey sarcasm through text, but I think I nailed it.

But to understand the differences of what we smoke, we have to understand why there’s this separation. In the US, it’s an open and shut case as to why we don’t get premium Cubans like our funny sounding allies: the embargo. It’s a different story in the UK though. Cuban cigars in the UK are made with English Market Selection (EMS) tobaccos. In layman’s terms, this means the best tobaccos in Cuba are rolled into cigars and sold specifically to the UK. Of course this raises the prices on EMS cigars. Add on top of that the high tobacco taxes in the UK, and buying cigars is a pricey proposition. I don’t think I saw one cigar under 15 Pounds (around $23 US). Why they haven’t stormed the ships coming from Cuba dressed as Native Americans to throw them in the harbor yet is beyond me.

I begged the question why there were no cigars from different nations on the shelves. Surely they’re less expensive! Apparently the taxing system would make them just as, if not more, expensive as Cubans. Retailers have to pick their poison: get EMS stogies, or get cigars from nations that don’t hold the same reputation worldwide as Cuba at a relatively similar price point. The choice is clear – Castro wins every time. Of course there are non-Cuban cigars here and there, but when I saw their price tags I almost threw them into the River Thames out of sheer anger. But aside from a few shops, you’ll be hard pressed to find anything but Cubans.

So in essence, Londoners who decide to take on smoking cigars are “born and raised” on Cuban cigars due to the simple economics cigar shops follow to bring in the best products for the lowest prices. Similarly, as Americans hardly smoke Cubans due to the embargo, we are “born and raised” on non-Cubans. Both nations love their cigars, but due to political and economic reasons, each nation experiences cigars on two totally different levels.

The high prices in London also make smoking cigars an ultra-luxury experience. As I said before, I really did not see anything less than 15 Pounds. This, I imagine, makes smoking each cigar a special occasion. Compare that to the States where we can enjoy them pretty much anywhere due to the low prices we pay. As an American, I’m used to simply sitting at the bar here at Leaf Cigar Bar and Restaurant watching a Yankee or Jets game (I know, why bother?) with my friends, paying attention more to the conversation and game rather than analyzing my cigar. I now wonder, due to the comparatively low price points in the States, if I enjoy them with the attentiveness of the London cigar smoker.

Aging cigars is also far more popular in London. I was able to pick out cigars from every decade from the 60s through today, which was pretty remarkable. For example, I was shown a full box of Cohiba Behike 40th Anniversary cigars (2006). The price for them was 4,500 pounds per cigar. I immediately broke Usain Bolt’s hundred yard dash record back to the table before I inevitably and accidently destroyed every single one of them. But to simply see these marvels aged approximately 8 years after their release was something I could hardly wrap my head around. It was nostalgic in a way, but no doubt the cigar has changed its profile since its 2006 release date.

Of course, again, this contradicts how we do things in the States.

While speaking with Pete Johnson of Tatuaje for the very first time a few years ago, I brown-nosed that I had a 2010 Cojonu aging in my humidor. His response was simple: “Dude, it’s a cigar. Just smoke it.” I’m a champ at making first impressions, I know. But I understand his point.

Cigar manufacturers already age their tobaccos and blend them together to give you a specific taste, which takes a very long time. From planting the seeds, to rolling the final product, the process of making and blending a cigar is a painstaking artwork. Aging can ruin what the initial blender offers in terms of taste, and can in turn be looked at as insulting if we age cigars for more than a couple of years. If you buy a box and age the cigars 10 years, it becomes a whole new cigar and completely different from what the blender intended. But again, the price points in London may be a contributing factor for this practice.

The last thing I will touch on is regulations of cigars. In the entirety of the UK, some of the proposed regulations the FDA is threatening to implement in the US are already in place. According to my friends overseas, the impact is devastating. The two main regulations in place are increased taxes on tobacco based on weight, and cigar box art is a thing of the past. In other words, the UK found a way to not only make buying cigars even more expensive, but they must hide all artwork on cigar boxes which can destroy consumer confidence in the authenticity of the cigars being sold.

In the States the FDA is already looking to define a premium cigar as anything over a $10 price point and ban anything lower. This legislation would put prices on cigars at astronomically high prices compared to what we’re already used to paying, which would bring us one step closer to the simple act of smoking cigars becoming an ultra-luxury experience. If we want to keep smoking our cigars on the back porch for $2 a stick, we have to hope the FDA doesn’t impose any damming legislation.

So although there are many differences between the US market and the UK market (more specifically the London market), one thing is for sure – both nations love their cigars. The appreciation cigar smokers have in both countries for a premium smoke runs deep. No matter what we pay, what we smoke, or how we age them, we both appreciate cigars and a good pairing to go with them. I would again like to thank Pavel Kabina and Mike Choi for taking time to introduce me to the London cigar market to get a small glimpse of what the cigar industry is like in England. And as always, happy smokes!

I’m a big fan of the entire Asylum cigar line and especially their Schizo in large ring sizes and when I saw the Goliath 6×80 Schizo it’s on my must-have cigar list but it’s not available for sale here in the USA, but is in stock for sale in the Netherlands and Germany which either doesn’t ship to the United States or I find a cigar shop there that does?
This is an American cigar so what gives?

I love a good cigar but the prices here in uk are atrocious……Most good cigars will set you back around £25 a piece…..The only things you can get for £15 is one tiny tiny 15 min smoker or a pack of basic cigarillos (decent cigarillos will cost you at least 2x that).

Sickening how over taxed our cigars are here when you consider how they have halted the rise of alcohol taxation for many years in a row……You can buy a bottle of cheap vodka for £10 yet 1 cigar will cost £25+ meaning you are either rich or can only afford them on special occasion.

Hi Lucinda,
I agree. No one should have to empty their piggy bank just to enjoy a good cigar. But we’re in the minority, so the people in power, who are pretty much against anything that brings hard working folks pleasure, keep stripping away our freedom. But you’re not alone. Just look at what’s been going on in California. G-~

Reading Time: 4 minutes Gary makes his case for the Romeo y Julieta House of Romeo being not only one of the best Romeo exclusives, but the best Romeos in general. Watch now – and check out the choice of whiskey that was made for this full-flavored blend.

How to Touch-up and Relight Cigars