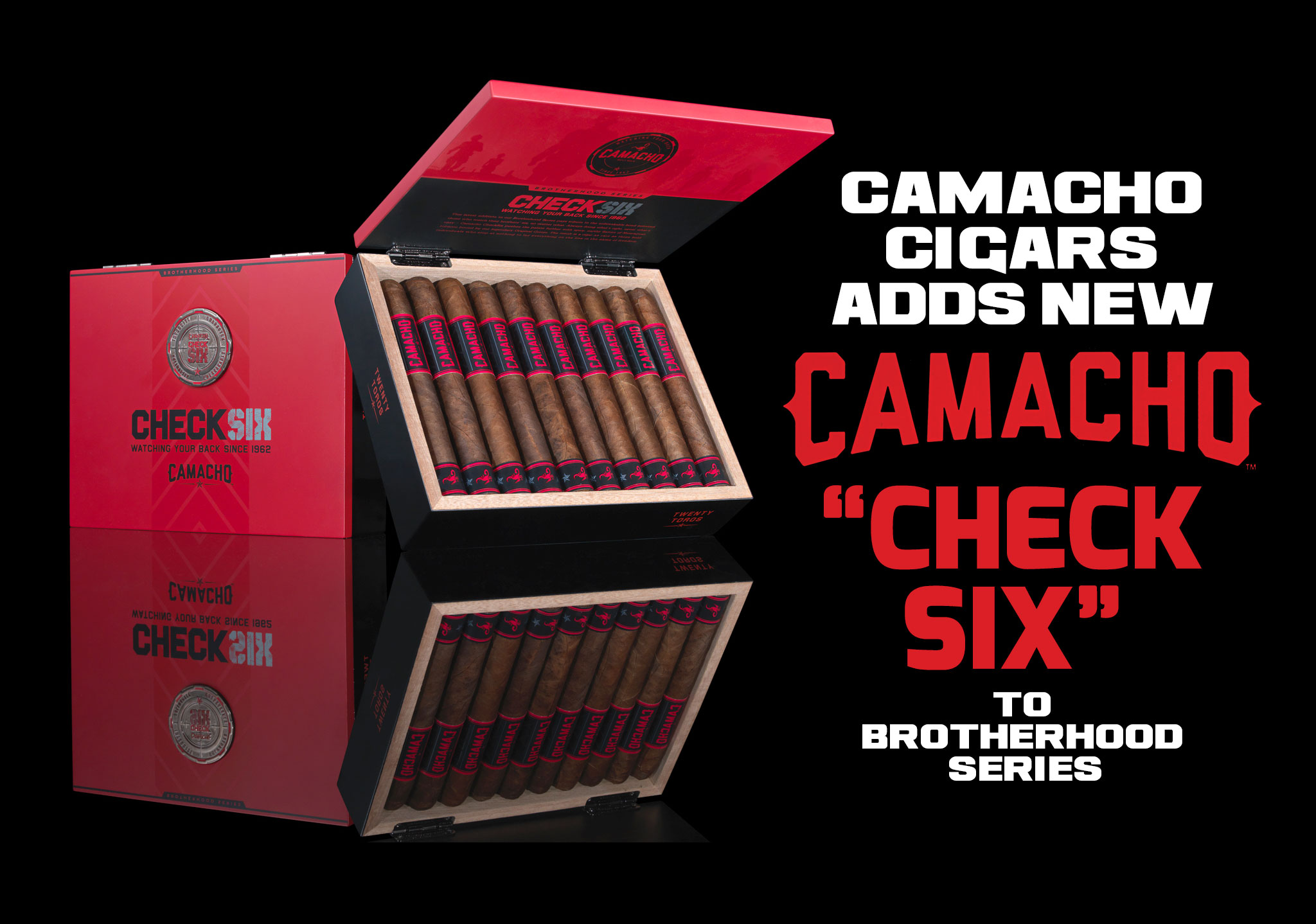 Camacho, the world’s leading brand of bold cigars, has just announced the latest addition to its Brotherhood Series, the new Camacho “Check Six.” Rolled to a 6″ x 50 Toro, Check Six offers another full-bodied smoke in the tradition of their Brotherhood Series, which is rooted in the elemental right to live free. As the folks at Camacho put it: “Free from limits. Free from compromise. Free to follow your own path, on your own terms. Each Brotherhood cigar is a celebration of the bond between men who take action and never sit idly by.”

At the core of the new Camacho Check Six is a powerful three-nation blend of Original Corojo from Honduras, Dominican San Vicente, and Criollo tobaccos from Nicaragua that combine for depth, strength, and complexity. A Criollo ’98 binder from Nicaragua adds a layer of peppery spice, while the Ecuadorian-grown Habana 2000 wrapper rounds out the blend for a perfectly-balanced, full-flavored smoke.

As part of the Brotherhood Series, Check Six pays tribute to those who serve and stand together to protect our freedom; that rare breed of individuals who are willing to lay everything on the line for their cause and prove themselves, not by their words, but by their actions.

To that end, Camacho Check Six symbolizes the unbreakable bond between those who watch their brother’s “six,” or “back.” The origin of the term “check six” comes from the number 6 position on an analog clock face. For example, if you were standing in the center of the clock’s face, facing the number 12, the number 6 would be immediately behind you. Get it?

“We are very excited about this second release under our Brotherhood Series,” said Dylan Austin, Vice President of Marketing for Davidoff of Geneva USA. “While the concept was inspired by a common bond shared amongst the military brotherhood, it is also aspirational for many.”

The new Camacho Check Six is presented in boxes of 20 cigars that include a shareable challenge coin on the lid. Shipping is scheduled to begin in August for the U.S., and to global markets in the first quarter of 2017.

“We all have those people in our lives that we know have our back,” added Mr. Austin. “By extension, it is also understood that you have theirs as well. This is the cigar to share with those special individuals.”

Reading Time: 4 minutes April showers may bring flowers, but this Spring Top New Cigars brings a downpour of flavor…See our list of six sparkling new-to-you boutique smokes you should add to your humidor…