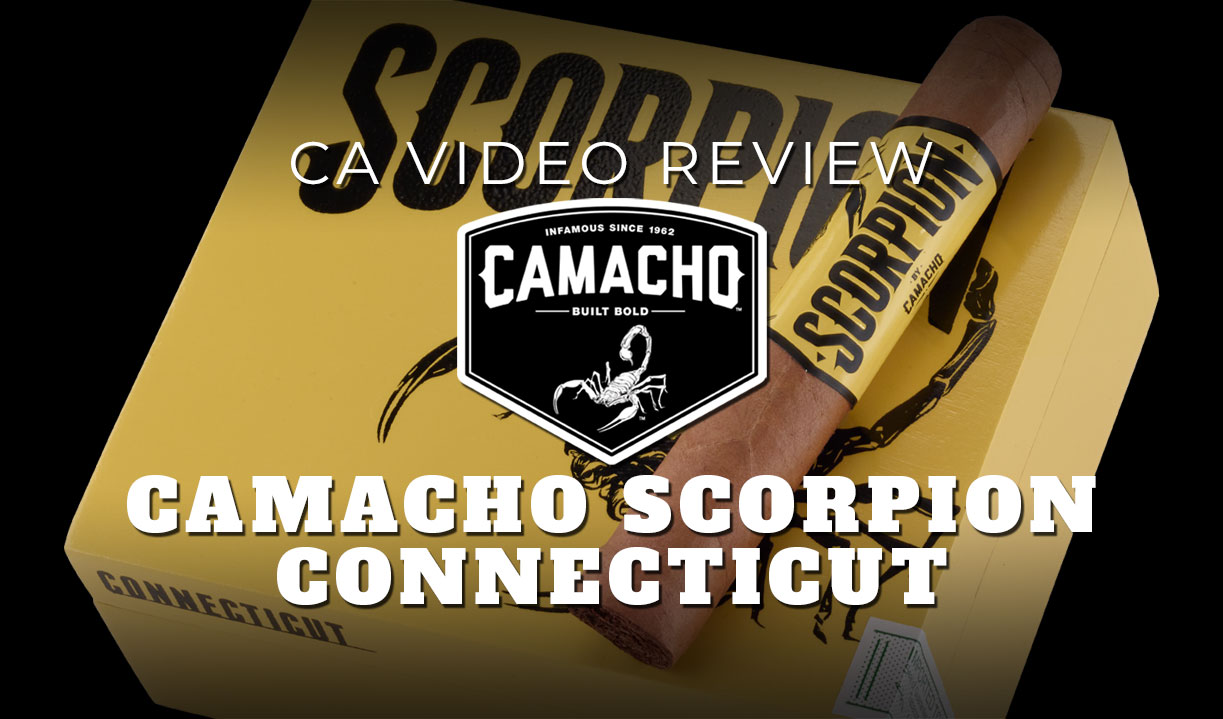 The Scorpion by Camacho Cigars Back Story

Standing as an icon of power, passion, fearlessness and versatility, the scorpion has been the enduring image of the Camacho Cigars brand since 2013. Only now does this stealthy creature emerge in the spotlight with an exclusive line of value-driven cigar blends. Scorpion by Camacho is designed to deliver bold ﬂavor and unmatched construction without stinging your wallet.

Handcrafted in your choice of two Ecuador-grown wrappers – Connecticut Shade and Habano Sun Grown – what you have here are unmistakable, American-style cigars that deliver a boatload of flavor at a very reasonable price.

As the good folks at Camacho Cigars see it: “If you’re gonna have a cigar, have a damn cigar. Scorpion by Camacho was built just for you, whether you’re in the mood for the fuller-bodied Sun Grown blend or the more approachable Connecticut blend, each will satisfy your thirst for bold ﬂavor and undeniable value, every time.”

Presented in affordably-priced boxes of 10 cigars and 5-packs in three sizes – a 5″ x 50 Robusto, 6″ x 60 Gordo, and a 7″ x 70 Super Gordo* – the Scorpion by Camacho selection is a must-smoke for every Camacho disciple, especially cigar smokers who crave a rich-tasting, well-balanced, and expertly made cigar.

* Super Gordo is not available in 5-packs.

Construction: Rolled firm and straight, with a silky, even-toned blonde color. Very well made.
Draw: Nice and clear.
Pre-light flavor: Barnyard and grass; smells a little sweet.
Toasting & Light: Toasts up nicely, with a taste of grass and sweet tobacco.
Base flavors: Wood, tart ‘n tangy sweetness like an apple, spice.
Retrohale: Cool, a bit woody with a building spice.
Aroma: Sweet, warm and toasty – very enjoyable.
Burn & Ash Quality: Salt-and-pepper ash forms with a bit of flake. Burn is mostly even, as long as you don’t smoke fast: the char line strayed a bit past the halfway mark, but nothing that resting it in the ashtray for a few minutes couldn’t fix.
Balance of flavors: An impressive amount of flavor for a mellow Connecticut…

Summary: Normally if it says Camacho, one would expect bold to be baked into the cigar experience. This Scorpion looks and feels Camacho-ish, so we’re already starting from a good place. But the signs from the prelight point to standard Connecticut territory, though it’s worth mentioning that the typical Connecticut bitterness is missing…

Lighting up, there’s a taste of sweet tobacco and grass to start off – plus a little bit of a crisp fruit (think apples, not berries). A dash of peppery spice quickly reveals itself, but not in the usual Camacho/in-yer-face way; this is much more subtle. You’ll find that bite building in the retrohale, and it’s definitely more noticeable by the end than it is at the beginning.

Primary flavors are enjoyably straightforward; and even though the Scorpion gets a bit snappy from time to time, the smoke is somewhat creamy and the whole thing stays pretty mellow throughout. The flavors make this interesting: while they don’t get wildly varied, they do get significantly more intense, as this little Connecticut is frantically working the levers underneath, building up the spice, going up and down on the woodiness and turning down the creaminess at various spots. It doesn’t take long for an herbish, almost floral quality to poke through – and once past halfway, this Camacho leans more on the floral and woody side; the sweetness lever gets cranked to the “off” position, and the creaminess gets dry like a biscuit. Eventually the Scorpion comes full circle, with the base tastes of wood and subtle sweetness bringing it to a close.

If you’re curious about the difference between this easy-smoker and the Camacho Connecticut, I’ll say that both are well made, woody and sweet; from there, the Connecticut is a little more leathery, a little creamier, and finishes up stronger. As for this Scorpion Connecticut, there’s less spice – it focuses its energy on being more tart-sweet and floral. If you thought the other Camacho was a good starter cigar, this one’s even better.

Flavor-wise, many Connecticuts can be a one-trick pony…Camacho Scorpion Connecticut has 1½ tricks, maybe closer to 2 – and that convinced us to add it to our Cigar Advisor Top 25 New Cigars of 2018 Report. I’d call this a strong “buy” for beginners, but the biggest reason I’d recommend this cigar to just about anyone: it’s not boring.

Summary: You could say that the Camacho Scorpion Connecticut Robusto flies in the face of Camacho’s “Live Loud” slogan. From a volume knob standpoint, this cigar rests somewhere in the 4-7 range; yet, it doesn’t stray too far from Camacho’s rep for exceedingly rich-tasting cigars. Well-built, with no soft spots, and impeccably rolled, it boasts a seamlessly applied triple seam cap.

From the get-go the cigar issues thick, creamy smoke starting with some saltiness that shares the stage mostly with flavors of sweet spice and some added earthiness. Also impressive was the burn, which held an even keel from start to finish revealing a very firm and virtually white marble ash.

Once past the midpoint, the cigar loses some of its mellowness. The smoke intensifies, dragging along with it more earthiness, a little less sweetness, and an appealing oaky note while the core spice remains steadfast.

I expected it to turn even sharper and stronger in the final third, but such was not the case. The body did increase somewhat, as did the spicy notes, but the smoke remained creamy and well-balanced down the final inch.

The Camacho Scorpion Connecticut Robusto gets my vote as the #1 gateway cigar to the Camacho line-up—that is, if you’re just getting into premium handmades. However, die-hard disciples should also find this blend worthwhile for its fullness of flavor. It coupled nicely with my afternoon mug of coffee, and I can also see pairing it with some of the better single malt scotches and bourbons.

Construction: The cigar is adorned with a light golden-brown wrapper and a triple-turned cap. The seams are well hidden, and the coloring is consistent from head to foot.
Draw: Good draw but a hair tight for my preference.
Pre-light flavor: Salty-sweet and earthy.
Toasting & Light: Toasty and sweet.
Base flavors: Earth, leather, cedar, and some salty nuances that build.
Retrohale: Smooth spices.
Aroma: Salty, nutty, and creamy.
Burn & Ash Quality: The ash holds well, and the cigar burns straight with no touch-ups.
Balance of flavors: There’s a good mix of sweet and savory notes.

Summary: Often a popular brand among enthusiasts who prefer cigars of a Honduran-origin, Camacho has a distinguished history. Their understated origins gave way to a stint with Christian Eiroa, who successfully popularized the brand. Today, the Camacho legacy rests comfortably under the wing of industry icon, Davidoff.

Camacho Scorpion Connecticut begins with a salty-sweet array of flavors like earth, leather, cedar, and sometimes cream. The smoke is smooth, mellow, and welcoming. Not a single millimeter of this stick is overpowering, and even the spices on the retrohale are buttery.

Somewhere between the first third and the second half, the cigar takes a savory turn. While the saltiness has been here all along, it’s now taking center stage, especially when your tongue touches the roof of your mouth. The dynamic taking place is surprising. I expected that this was going to stay put as garden variety Connecticut, and while I wouldn’t say that it fully qualifies as part of the Connecticut Renaissance that’s been unfolding in recent years, it’s certainly not hum-drum.

As the last third winds down, savory notes continue their slow rise and a subtle spiciness hovers in the background. There’s still plenty of sweetness, but most of it now resides in the finish. Camacho Scorpion Connecticut’s lasting impression was its outpacing of my expectations. If you’re just happening upon the cigar frontier, its flavors, mellow profile, and super-friendly price point add up to a significant value. I wish I had found a cigar like this for my first smoke.

Summary: I’ve always been a fan of Camacho and their big bold heritage. Years back when they came out with the Connecticut, I loved that a cigar with a Connecticut wrapper could have so much flavor and not be a light-weight smoke. Well, more than a decade later in comes the Camacho Scorpion Connecticut and I am more than impressed. Why, you ask? Because it’s the mellowest Camacho introduced to date, but DO NOT let that fool you. The Scorpion is built for flavor and there is a ton of it.

The difference here is that the wrapper is an Ecuador-grown Connecticut leaf that’s placed around a hearty inner tobacco blend, and the result is a refined flavor profile with complexity (and complexity isn’t usually a word you hear with a lot of cigars brandishing a Connecticut wrapper). And let me tell you that the wrapper is silky, with a gorgeous tan color, urging you to pick it up and smoke its brains out!

The pre-light draw has the taste of cedar which I puffed on several times before lighting. Upon firing-up there’s a distinct tobacco sweetness that hits you immediately as the smoke laces your palate with a very creamy mouthfeel and it is delicious. A nice tangy spice starts to set in as you continue to puff, offering up just a hint of pepper. I even got some citrus notes creeping in which just confirms the complexity that this stick delivers. I found the retrohale most interesting as the Scorpion didn’t sting my nasal passages, but instead delivered a smooth and spicy citrus that was wonderfully pleasant.

As for the construction, it’s just terrific, as the cigar feels solid in your hands and delivers a full mouthful of white smoke. This Robusto I enjoyed built a long and solid white ash that I watched grow to almost two inches before giving it a tap. You know, I could smoke this one any time of day, but it really pairs wonderfully with a morning coffee. A good bourbon with a touch of sweetness would also marry well after a long day at work. I really like this new Camacho a lot, and for the price, there’s going to be a few taking residence in my humidor immediately.

Read More
Cigar Ratings & Reviews
RP goes Vintage again: see our Rocky Patel Vintage 2006 review, one Rocky made for "robust flavor and power." Did it live up to the chatter? Click and see!
Read More