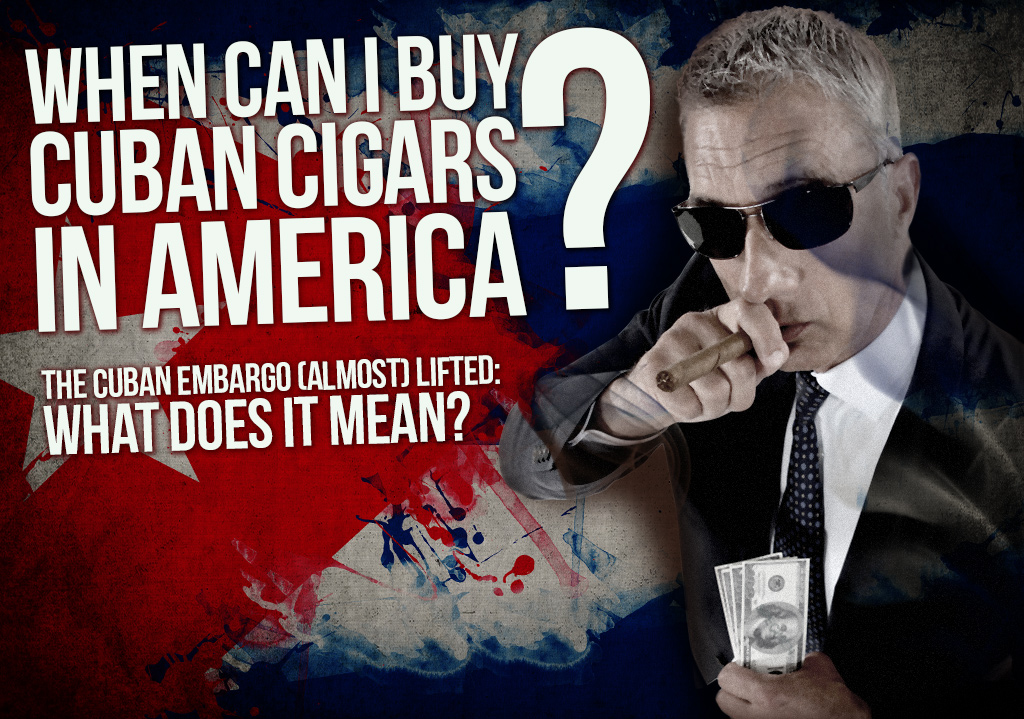 When Can I Buy Cuban Cigars in America?

The Cuban Embargo (Almost) Lifted: What Does It Mean?

We’ve (finally) seen progress on the Cuban embargo front…and all of us here at Cigar Advisor have been having some fun watching the drama play out. As you’ll recall, President Obama announced we are improving our ties with Cuba diplomatically and opening the floodgates of trade. “Let the cigars and Cuban rum flow!” was the collective scream. Well, at least that’s the click-bait and headlines that have been flowing throughout the media since the press conference, getting everybody hyped up that Cuban cigars are only minutes away from landing in our nearest smoke shop. To be sure, I want all that to be true; but there are a few misconceptions and fairly intense ramifications this partial lift of the Cuban embargo (if you can even call it that) has on the cigar industry as a whole. Of course, I would be remiss in not mentioning the humanitarian issues of this whole ordeal – but rather than satisfy my itch to use my political science degree, let’s focus primarily on three industry-related things this announcement really means: the ability to obtain Cuban cigars, the impact it will have on non-Cuban cigar companies, and a look ahead towards the future of cigars.

I hate to be a downer about buying Cuban cigars, but I feel it’s my duty to warn every stogie lovin’ son-of-a-gun out there: as it stands, and regardless of what you might have heard, there is zero policy in place where American consumers like you and me can purchase Cuban cigars domestically. That means Cubans are still very much so off limits to anyone looking to buy some online, over the phone, through the mail, or even by screaming your order to Cuba via bullhorn from the Florida Keys.

Instead, what seems to be happening is the eradication of a President Bush (43) policy that was enacted on August 1, 2004, which banned any and all Cuban imports, by any person traveling to Cuba, with certain restrictions in place on those using a special travel visa. We’re simply going back to the pre-2004 policy where anyone with a travel release to Cuba can bring back $400 worth of products, $100 combined of which can be cigars or alcohol. And a hundred bucks doesn’t exactly buy a huge haul of good Cuban cigars. Plus, tourism is still banned to Cuba except to only a very select group of people – certain classifications of businesses, baseball teams, certain educational and humanitarian groups, and families with relatives living in Cuba, for example – and it’s difficult even for them to travel there and bring back any product.

As it stands, Cuban cigars are still illegal to obtain and carries a $250,000 fine, up to 10 years in prison, plus a $65,000 OFAC fine per violation. And if you’re one of these people with a travel release to Cuba and you get caught selling these cigars in the United States via a legitimate company, the fine is upped to $1,000,000. This isn’t to say that new policies won’t come about under the current administration that allow for more open tourism or the actual import of cigars and other goods, but the signs don’t point to any significant policies being enacted anytime soon. So watch out for the media hype; as of right now, and I can’t stress this enough, you cannot buy Cuban cigars legally in America.

If you’re still thinking of getting Cubans via the black market, consider this: while some of you have used reputable dealers with success, a vast majority of the Cubans sitting in U.S. humidors right now are fake – meaning the chances of you getting ripped off are pretty damn high. I don’t care if you bought them from Mother Teresa; you’re probably sitting on imitations. The Canadian market, which allows the sale of Cubans, is almost as bad as the U.S. market, sitting at around 80% – 85% counterfeit. That figure includes retail stores in the Great White North.

To further add gasoline to the fire, now that word has gotten out worldwide that the United States may completely lift the embargo, you better bet your sweet petunia that even more counterfeiters are pumping out even more fakes to flood the market, making your chances of getting screwed even greater. In other words, patience is key. Once, or should I say “if” the embargo is fully lifted, you would be wise to wait until legitimate Cuban importers are established in the United States.

Show of hands: how many people like La Gloria, Cohiba, Partagas, Macanudo, or almost any other cigar company of Cuban origin? Well, there is a possibility that you may be kissing these now-Dominican brands goodbye. Again, I’m not trying to play the downer here, but there’s a lot of judicial trademark malarkey that can undoubtedly scar the cigar industry forever.

If you’ve been paying attention to the seemingly endless court battle between the Cohiba of Cuba and the Dominican Republic, you’ll understand why there are two Cohiba cigar companies. In short, it’s because the United States refused to recognize Cuba or any of their policies, companies, products, or protect any of their international copyright laws. This allowed the Cohiba Red Dot from the DR to grace our humidors for a long while, while U.S. Federal Courts put their fingers in their ears screaming “LA! LA! LA! LA! We can’t hear you! You don’t exist to us!” every time Cuba tried to make a case for themselves. Unfortunately for Cohiba from the DR, who is now being taken to the Supreme Court for yet another round of appeals by Cuba, the United States essentially has just declared recognition of Cuba, and in turn – possibly, depending on how the courts see the arguments – the island’s right to be protected by international trademark and copyright laws. And that opens the floodgates for every Cuban cigar company with a same-named, non-Cuban competitior to sue for the rights over the trademark.

Hopefully, this reality check doesn’t leave you curled up under your desk or blanket lamenting the news. So to be fair, here’s the good part…there is a bright light at the end of the tunnel. What cigar enthusiasts should really be thinking about is patiently waiting to see what’s to come!

Once the embargo is lifted and legitimate distributers are established nationwide, it’s very possible we’ll have tasty Cubans to buy whenever we choose. And here’s one better: imagine a world with a cigar composed of Nicaraguan, Dominican, and Cuban longfillers in the recipe! This will be a reality if the embargo is lifted. The blends will advance tremendously, with new flavor profiles that will blow our heads and palates into outer space.

Other Things to Watch For

Let’s say the embargo is lifted; a couple of questions remain as to how well this new-again import will perform. There have always been questions about how “good” Cuban cigars really are…rather than get into a better/worse discussion, it should be said that the forbidden fruit always tastes delicious. That being said, I’m sure Cuba has its share of dog rockets – and as we’ve seen time and time again, the NC cigars we smoke here now have, as a whole, become exponentially better as the industry has grown and developed over the past 50 years. And what of this new demand? There already has been plenty of discussion – and serious concerns – over the consistency and quality of Cubans currently on the market. Will Cuba be able to maintain a supply of good tobacco, or will the factories in Havana be rolling every last scrap of leaf into cigars to keep up with the wants and needs of this new American market? They can only grow so much; so only time will tell…

But for now, it’s important not to put the cart before the horse. We’ve got a long way to go in order for Americans to buy legitimate Cubans legally, but the wheels are in motion. I won’t predict when we may be able to buy Cubans legitimately due to any pending battles the administration may have with Congress. After all, the ladies and gents on Capital Hill are the only ones that can actually lift the embargo, not the President. But if the embargo does get lifted to any degree, and after all the legal fallout due to any policy change passes, the cigar industry will reach a height never before thought imaginable. Well… that is, of course, if the FDA doesn’t impose any damning legislation on the cigar industry.

Jonathan, there is no Cuban Macanudo. Secondly, the families that owned the Cuban trademarks before the nationalization of the cigar industry by the Cuban government, sued in the World Court to get their trademarks for cigars sold in the USA. There are no Cuban cigar companies, the industry is controlled by the government. Altadis SA is the partner with Habanos SA in the worldwide distribution of Cuban cigars. Please, do a little more research.

dictator that were known for making the great “Cuban cigar” all keft when Castro cam into power. They all moved to neighboring countries. That is why today a well made cigar from the DR is just as good as a Cuban.

Jonathan. Rather than point out any mis-statements in your article, I want to just say I appreciate the information.

I try to see the positives in what you’ve writtren and have no desire in flexing my knowledge as written by John Troiano.

There will always be someone trying to say they know more than you do, missing the positive effect that your article has had for the masses. So thanks a bunch.

Way to go John Troiano. You have brought some great attention to the Altadis line albeit in a negative way.