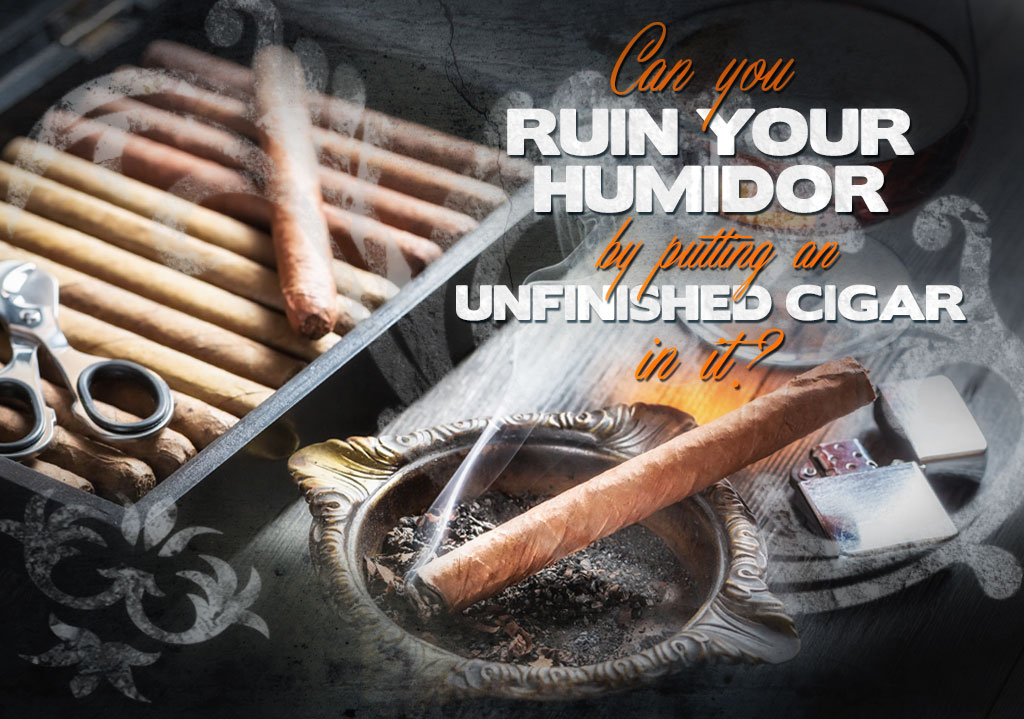 Can You Ruin Your Humidor by Putting an Unfinished Cigar In It?

Cigar Q&A: Will Putting an Unfinished Cigar in My Humidor Ruin It?

Believe it or not, I’ve actually been waiting for someone to come along with this problem. Even though you were smart enough to cut the cigar back behind the ash, unfortunately, the strong tarry aromas left in the remaining tobacco leaked out and soured the aroma of your humidor.

That said, it doesn’t mean all’s lost. I assume that by now you’ve removed the unfinished cigar. If most or all of your cigars are still in cellos, they shouldn’t have been too badly affected. For those that aren’t they should eventually come back. I might be a good idea to collect some Spanish cedar blocks from some cigar boxes and spread them around the humidor. The idea is that over time the odor of the cedar will help eventually eliminate the rancid tobacco smell in there now. Moreover, the natural aroma from the oils in the tobaccos of your cigars as they age should outweigh the “wacky smell” but it might take some time.

If your cigars are in cellos, it might even help to unwrap the top row and let them emit their natural aromas. But hold off on that until you’ve noticed the odor has significantly subsided. I would even venture that if you smoked one of your other cigars now, it might not be all that bad once it’s been lit.

That’s about all I can say at this point. Perhaps another one of our readers can shed some additional light on this by leaving a comment.

In the meantime, I wish you luck and I have a good feeling it will return to normal. Be patient, and next time you want to save an unfinished cigar, just leave it out. There should be enough moisture in the cigar to keep it supple overnight.

Reading Time: 6 minutes Sink into your chair, turn the speakers up, and check out our ongoing, definitive guide to pairing cigars and music. Now playing: Volume 5 feat. Michael Giannini of Ventura Cigars.

How I Rated the Famous Private Selection Rocky Patel

The Complete Guide to Cigars